They Saddled the West 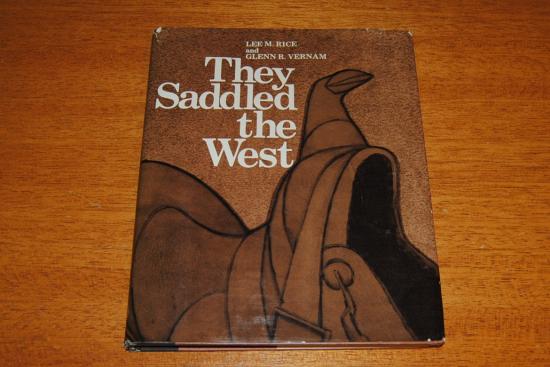 I recently re-read the book They Saddled the West by Lee M. Rice and Glenn R. Vernam.  It was published in 1975 and is a history of a lot of the major names in saddle making from the mid-1800's to the early to mid 1900's.  Very interesting reading if you are interested in the development and changes in design of North American saddles during that time period.

There were a few things that I found really interesting as I read it.  The first is the main topic of the book - the development of the different styles of saddles - skirt types, fork types, rigging changes etc. - based on the section of the country and the time period.  The history behind where things came from and how they changed over the years is really fascinating. 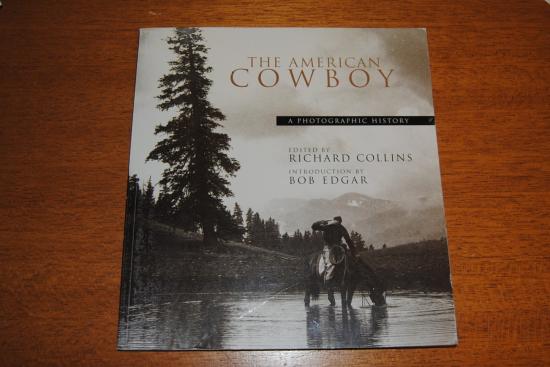 This is another book we picked up in the last few months:  The American Cowboy: A Photographic History, edited by Richard Collins.  It is primarily a book of old cowboy photographs from the late 1800's to the early 1900's.  It is fun to look at the gear and see the big, square skirted, double rigged saddles in the Texas area compared to the round skirted, single rigged saddles from farther West.  You could spend a lot of time examining these photos with a magnifying glass to see the fine details, because the photos are of really good quality.

The business of good saddles then

But what I also found really interesting was the name on the saddles and the way the businesses were run.  Some of the big saddle companies had company names, often based on where they were located - for example, Visalia.  But most saddles had a person's name on the stamp.  Yet so many of the saddles with some of the "big name" makers' stamps on them - DE Walker, Gallup, Porter, etc. - we not made by that person.  These men started out by being saddle makers first, but as their saddles and their names became popular, they expanded their business, took in partners and apprentices, hired more saddle makers, and became big companies.  Some of these companies had dozens of saddle makers working for them.

But it doesn't sound like it was assembly line work, where you only do one job out of the many that go into building a saddle.  The saddle makers who worked in these companies built the entire saddle themselves.  And that is why some of the men who apprenticed in the shops of older "big name" makers could become "big names" themselves.  They had learned everything that went into a good saddle - if they were working for a good company.

The business of good saddles now

Today, it is different.  Very few big saddle companies go by one person's name.  (Billy Cook is the most notable exception at the moment, and I don't believe he is associated with most of the saddles sold under that name any longer.)  Rather, they have company names.  So when we buy a truly hand made saddle with a maker's name on it, we expect that person to have personally built that saddle.  And in today's world, that is generally true, since most truly custom saddle makers work alone in their shops.  (Looking back, there were probably a fair number of these individual saddle makers building a few, very good quality saddles a year.  But maybe it is because they only built a few saddles a year that their names aren't remembered.)  Some of today's custom makers might have one or two helpers, and we know of a couple of exceptions of today's "big name" custom saddle makers who have, or have had, other really good saddle makers building under their maker's stamp.  (The stamp they use on the saddles they personally build is a bit different from the contracted out saddles.)  But the days of being able to work as an apprentice in a good saddle company and really learn the art of making saddles seem to be past.

This means that learning saddle making is a lot harder now that it used to be.  You either learn on your own via the many books and DVDs, of varying quality, that are more available now than at any time in history.  Or you pay to take a saddle making course somewhere, knowing that in North America there are no standards or qualifications for someone to say they can teach saddle making.  But being paid (albeit poorly) during the months and years it takes to move from doing the manual labour jobs up to being a full saddle maker - you can't find that anymore.  If someone offered it, they would have no trouble filling their positions, I'm sure.

The impact of innovation

Another thing that struck me is that the people who are remembered well enough to be in the book were the innovators - the ones who changed things.  For example, Frank Meanea came up with the Cheyenne roll and that, with a few other modifications, made the "Cheyenne saddle" very popular.  Charles E. Coggshall was the driving force behind the "Montana Three Quarter saddle" that found the half way point between the full double rigged saddles of the more eastern West and the center fire rigs coming from California.  Hamley's listened to what the cowboys getting involved in rodeo wanted and came up with their Form-Fitter.  Then they were the company asked to build the first Rodeo Association saddle when the standards were first set for the saddles allowed in the saddle bronc competitions.  The guys who just copied the others and didn't do anything really different or better didn't make it into the book.

The evolution of carving styles

The whole idea of how the decoration of saddles has changed over the years is also a mentioned briefly throughout the book.  Anyone interested in the evolution of different styles of carving will just get a taste here and there of how and where things changed.  Unfortunately, this book doesn't go into great detail on how the different styles came about and who were the key makers instrumental in them.  I don't know if there is such a book around, but I can see there being an interest in it.

Of course, my main interest in the book was to see what they had to see about trees and tree makers.  But that would make this post WAY too long, so I will write about that next time...