Home > Saddle Tree Blog - From Shop and Desk > Of pivots, lollipops and springs - movement of the horse’s hind leg

Of pivots, lollipops and springs - movement of the horse’s hind leg 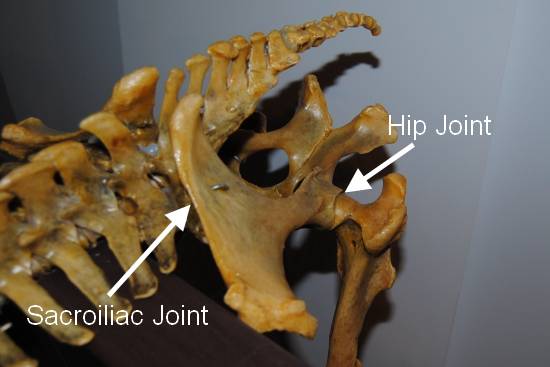 When we talked about the front leg, we said there was no defined pivot point because the whole leg is attached by muscle, so the shoulder blade moves around a bit against the chest.  The hind leg is different because it is attached solidly – leg to pelvis at the hip joint, and pelvis to spine at the sacroiliac joint. 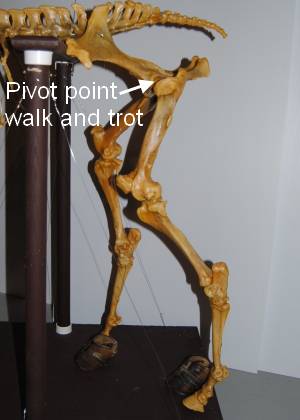 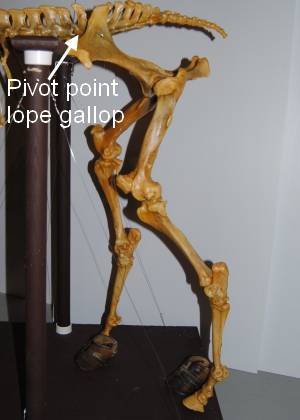 The lope and gallop, however, are different.  Each leg still moves at the hip joint, but both legs swing forward at close to the same time, and the pelvis rotates with them.  The pivot point for these gaits then becomes the lumbosacral junction – the point of the spine where the vertebrae of the loin (lumbar vertebrae) join the sacrum, a solid section of the spine composed of 5 fused vertebrae which joins to the pelvis at the sacroiliac joint.  This makes the “lever” of the hind leg that much longer and increases the stride length accordingly.  I found this information, unreferenced, in “The Dynamic Horse” by Dr. Hilary M. Clayton.  I have not yet found other references to this, and I expect it is more complicated than this, but it makes sense that something like this is happening. 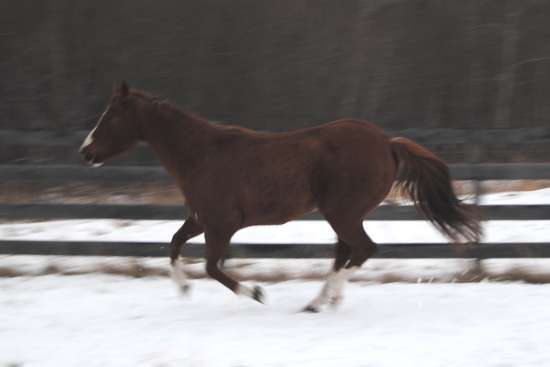 As you can see in the pictures, the angle of the pelvis relative to the horse's body is different depending on whether the legs are reaching forward 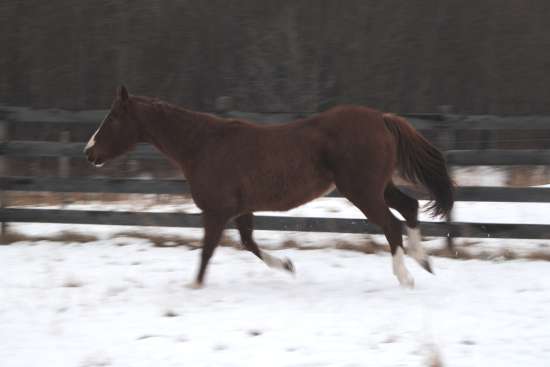 or are stretched back.  It isn’t just the hip joint as pivot point at these gaits.  (Sorry the pictures are so dark.  It has been dull and grey and rainy – in December!! – for most of the last week and we haven’t been able to get better ones.) 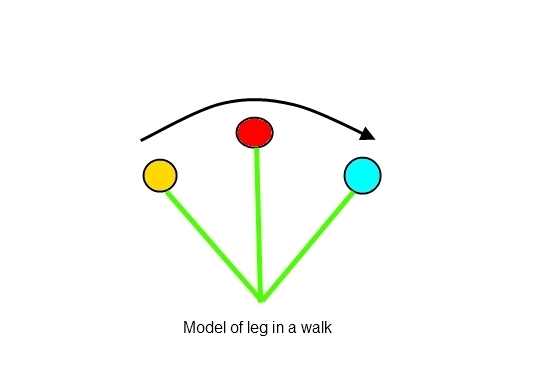 Something else which I have found very interesting is the way legs work at different gaits.  At walking gaits, the model of the leg is what is called an “inverted pendulum”.  (I see it as a trio of lollipops stuck in a piece of bubble gum, but anyway…)  As the leg is placed on the ground, the hip joint is low.  As the body moves forward over the foot, the hip joint rises compared to the ground, with the high point at mid-stance – or right when the hip joint is above the foot.  Then, as the body continues forward, the hip joint gets closer to the ground again.  (This model of how the legs work was first put forward by Cavagna, G. A. et al, in 1976 and 1977 in The Journal of Physiology.  The diagrams I have reproduced, very imprecisely, come from from BioMechanical Riding and Dressage – a Rider’s Atlas by Dr. Nancy Nicholson.  I will be referring to this book more in the future as it is an excellent and well referenced book.  I recommend it highly for anyone interested in equine anatomy and biomechanics.)

These pictures are the best I can do at the moment to show this in real life.  Our camera’s continuous shutter speed isn’t fast enough to catch all phases of a stride and I am not smart enough to be able to take single frames off a video, so for now these will have to do.  But if you can watch a horse move against a horizontal line – in this case the fence – you can see the rise and fall of his hind end at the different phases of the stride. 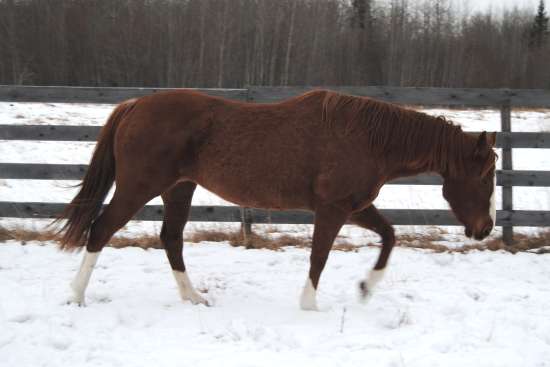 In the first picture, Dancer has just put her left hind down and the next foot up will be the right hind, before the left fore touches down.  So her hind legs are close to as spread out as they will get in a walk stride.  You can just see the top of the board over her rump. 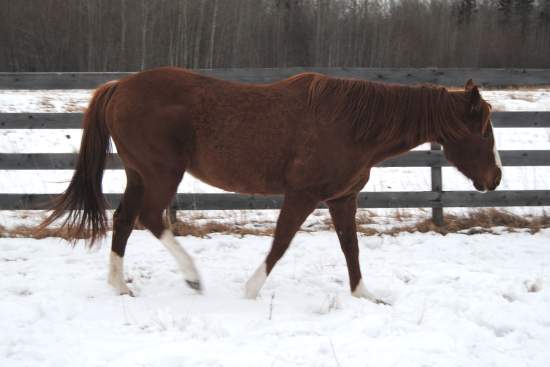 In the second picture, her right hind has just swung past her close-to-vertical left hind, so she is just past mid-stance when her hip joint is highest.  You can see that her rump is higher than the fence now., so her whole hind end rises as it goes over a planted foot. 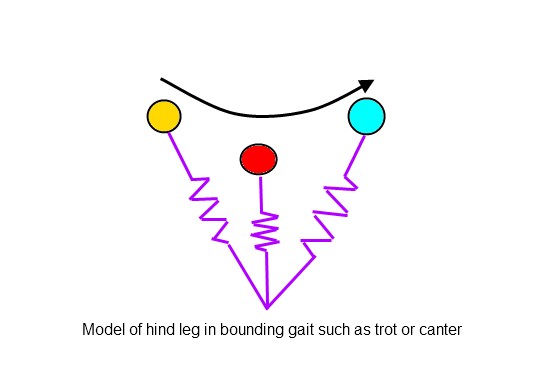 However, at “bounding gaits”, such as trot, lope, gallop, etc. the legs work as “spring loaded inverted pendulums”.  So when the foot contacts the ground, the hip joint is high.  At the body moves over the foot, the leg compresses, storing some of the energy in the elastic structures of the leg.  At these gaits, the hip joint is at its lowest when it is right above the foot.  Then it rises again as the leg releases some of that stored energy to propel the body forward.  Note:  the hip that is weighted is always higher than the unweighted hip.  (Or, put another way, the pelvis tilts so the leg in stance phase is higher while the leg in swing phase is lower.)  In trot, lope and gallop, the whole hind end drops as it goes over a planted foot. 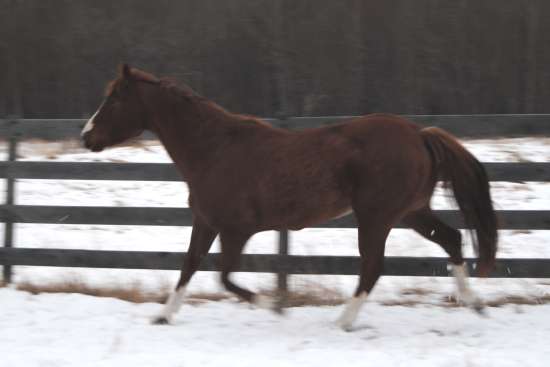 In the first picture, Dancer’s left hind and right fore have just landed, so she is just starting the stance phase.  You can see her rump is just a touch higher than the top board on the fence here. 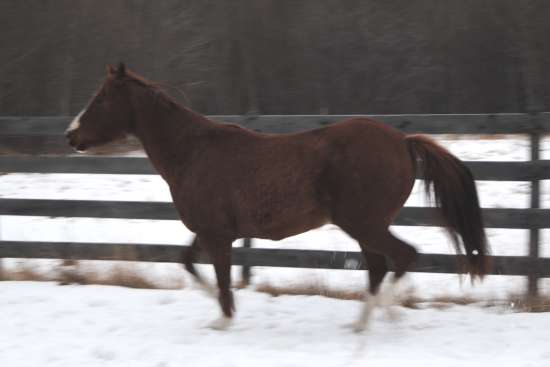 The next picture our camera could take was ¾ of a stride later.  It is just about at mid stance with her left hind swinging past her planted right hind.  You can see the top rail over her rump, so her hind end is lower mid-stance at the trot.  This effect is even more noticeable at the lope, but we couldn’t get pictures of that.  However, it is much easier to really see this effect at a lope than at a trot.

Does this apply to the front leg too?

We know that energy is absorbed in, and then released from, the elastic tissues of the front leg in the same way as the hind, especially in the faster gaits.  I expect things are less clear because the muscle sling that holds up the front end between the legs will mute these effects, but I haven’t seen anything written about how these inverted pendulum and spring ideas really work on the front legs.

So how does this affect saddle fit?

Well, I’m not sure, but I know that it must.  I believe that the pivot point changing at the faster gaits, and the lollipop to spring change between walking and bounding gaits must have some effect on the shape of the horse’s back.  And since this moving “shape of the back” is what we are trying to fit, it has to influence how saddles fit somehow.  But while studies have been done on the 3D movement of the horse’s spine, I am not aware of anyone who has (yet) mapped the moving shape of the whole back – spine, muscles, etc.  And THAT is what we have to, and do, fit!  So, in the meantime, I just find all this really, really interesting.  I hope you do too.

After the New Year, I’ll start on the spine.