The cervical (neck) vertebrae and how they move 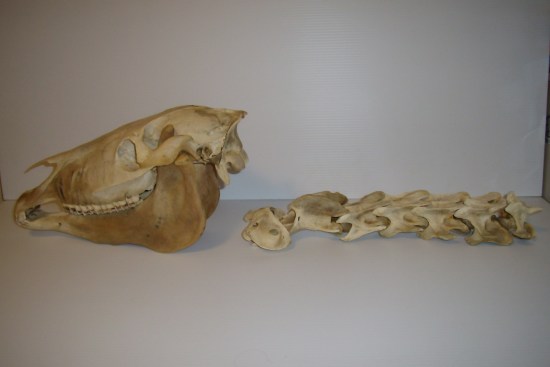 The cervical (neck) vertebrae is the first section of the spine I will write about.  It has the most variation in form within it.  There are two very unique vertebrae that allow the head to have the range of motion it does.  There is also a lot more movement between the cervical vertebrae than any other section of the spine, allowing a lot more movement in the neck overall than any other part of the spine.  This is pretty obvious.  And while we don’t ride the neck of the horse, because the spine is one unit – bones, ligaments and muscles all connected as they run down from head to tail – how the neck works does affect the rest of the back.  And it all starts at the head... 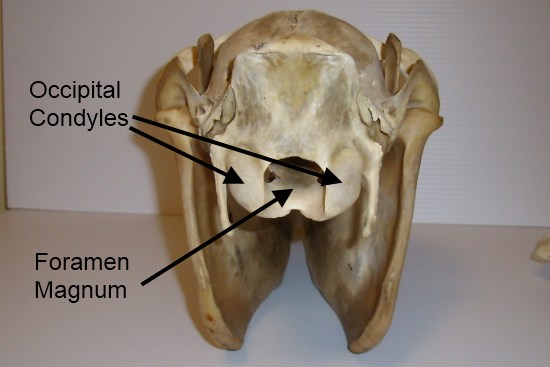 Did you know you have a big hole in your head?  Officially!  It’s called the foramen magnum and it is where your spinal cord leaves your skull and goes into your neck.  In Latin, foramen means hole and magnum means big.  (I told you anatomy was easy for people who spoke Latin.  “What should we name this anatomical feature, Brutus?”  “Well, it’s a hole and it’s kinda big.  Why don’t we call it “big hole”?” “Sounds good to me!  Label the diagram, Brutus!”)  It is large because there needs to be room enough that the spinal cord doesn’t get squished as the skull moves relative to C1.  The joint between the skull and the first cervical vertebra is the most mobile joint in the whole spine. 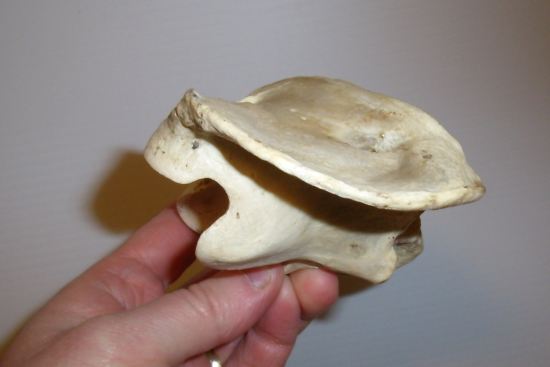 C1 is so special it has its own name – the atlas.  It comes from Greek mythology where Atlas was the guy who held the world on his shoulders.  (In comparison, Job 26:7 in the Bible says “He hangs the world on nothing.”  The real Creator knows how He set it up!)  So the atlas “holds up” the head.  It is totally unique.  It has very large transverse processes which are officially called the wings of the atlas.  (OK, so sometimes we get it easy in English too…)  You can feel the edges of these very easily just behind your horse's head. 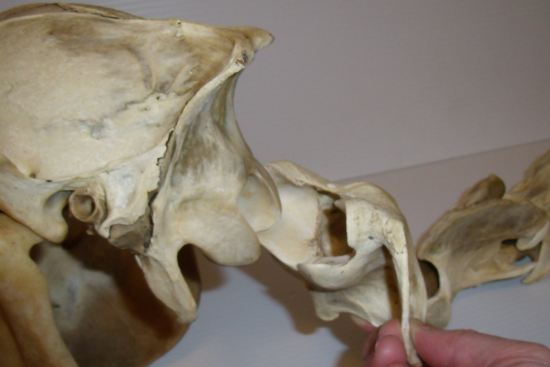 The concave front is really deep because it fits onto the rounded projections on the skull, the occipital condyles.

This is the “yes” joint.  It allows us and our horses to nod our heads up and down.  In the pictures above, I am moving the bones relative to each other the way they feel like they should move, but I am not saying this is really how they are oriented or the extent of their movement in real life.  There was a very interesting study done by Dr. Hilary Clayton and colleagues at the Mary Anne McPhail Equine Performance Center on equine cadavers.  I haven’t been able to get a hold of the original study, but the graph which shows the degrees of movement possible at each joint in the spine is in her book Conditioning Sport Horses, which I do own.  While the results here might differ a bit from how live horses actually move, they do give a good comparison of what the limits of movement might be.  The study showed that the horse can move its head a full 90 degrees up and down at this one joint alone.  What I find surprising in looking at the bones is that there is also about 45 degrees of movement sideways – lateral bending – at this joint and they can also rotate the skull relative to the atlas over 35 degrees, which is the second largest amount at any joint in the spine. 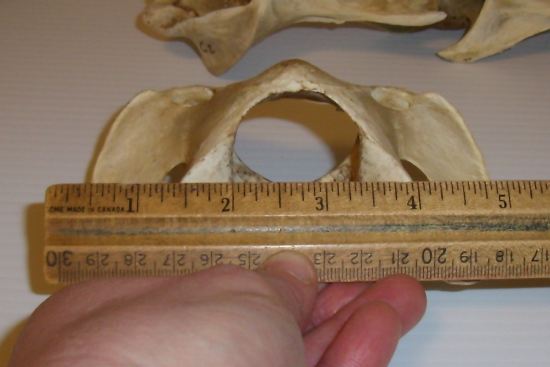 This amount of movement explains why they need a “big hole” to give the spinal cord enough room that it doesn’t get pinched.  In fact, the vertebral foramen through the atlas is also really large.  For fun I measured it on these bones and it was over 1 ¼” in diameter.  Remembering that these bones came from a small pony sized mule, the hole in a regular sized horse skeleton would be a lot larger. 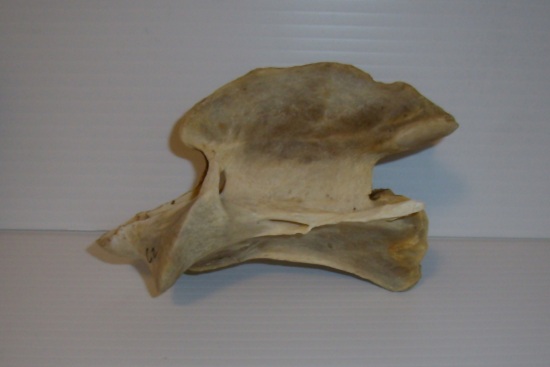 Part of the reason the hole is so big is because of the structure of C2, which also has a name – the axis.  It is also a totally unique vertebra.  It is the longest of the vertebrae and has a very large, strong dorsal spinous process.

It also has a projection out the front end called the dens which fits inside the vertebral foramen of C1.  It is held in place with a system of ligaments.  As you can imagine, if it ever gets loose and the horse nods his head, the dens will stick right into the spinal cord.  I would have thought that with it held in place, there would be minimal flexion/extension, but the graph shows over 15 degrees of up and down movement at that joint.  However, there is minimal lateral bending between the two.  Those two vertebra pretty much work as a unit in the side to side direction.

But the reason this vertebra is called the axis is because C1 rotates around it.  This is the number one reason why the horse can twist its head relative to the rest of the bones in the neck.  (When we make that motion, we are shaking our heads “no” but it is tough to compare horses to people because of the different orientation of the head and neck.)  They have over 110 degrees of rotational movement between the atlas and the axis.  In comparison, the entire rest of the spine has less than 5 degrees at any one joint. 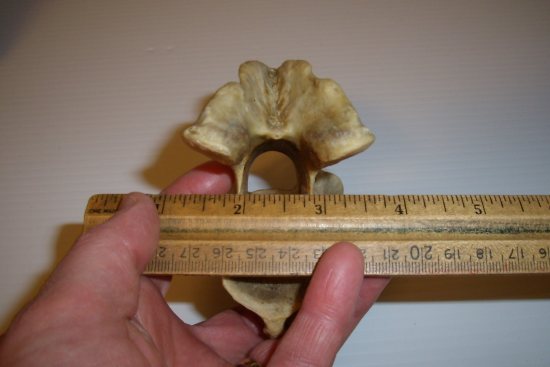 And the size of the foramen is far smaller.  At the back of C2, it measures about ¾” in diameter.  The foramen size gets larger and smaller as it goes down the spine depending on the size of the spinal cord itself.  There are larger areas where the nerves to the front and back legs come off, and the space for it naturally gets larger there. 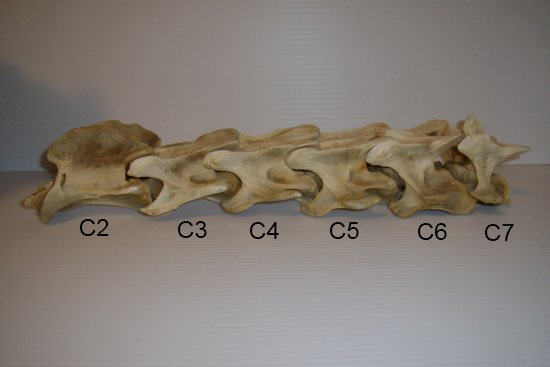 Behind those two very specialized vertebrae, the rest of the cervical vertebrae are relatively similar in structure.  They get shorter as they go back.  They don’t have much for a dorsal spinous process till they get to C6 and C7.  Because their articular processes are pretty horizontal, there is very little axial rotation possible.  And they have lots of concavities for the muscles of the neck to fit into as they run alongside, above and under the vertebra.

We know that the neck really changes shape from head up to head down to head turned sideways and all around.  While there is very little rotation in the neck joints, there is a whole lot of flexion and extension (up to 35 degrees in some joints) and even more lateral bending (over 40 degrees in some joints).  And when you add up those degrees between every joint, it makes sense that a horse can chew on its flank or grab a carrot from between its front legs if it really wants to. 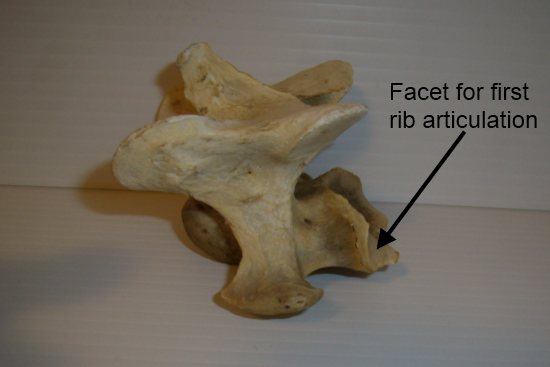 The last cervical vertebra, C7, is also different than the middle ones.  It has a taller spinous process, starting the trend into the withers.  It also has a facet on each side of its caudal (toward the tail) end that articulates with the first rib.  (Ribs sit ahead of the vertebra their number corresponds with.  Rib #1 is between C7 and T1.) 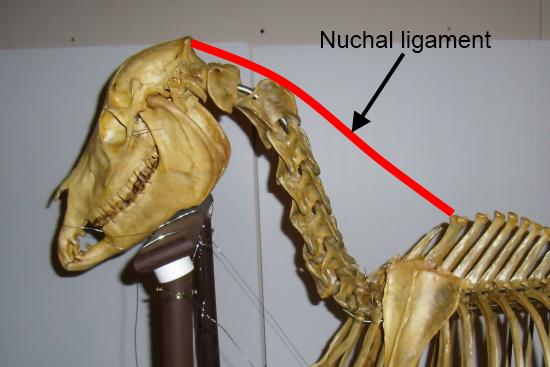 Of course, flat on a table is not the normal configuration of the neck either.  Arnie, while not perfect I am sure, shows a much more realistic cervical vertebral shape.  The bones actually run towards the bottom of the neck at its base, with muscle above it, and the nuchal ligament above that. 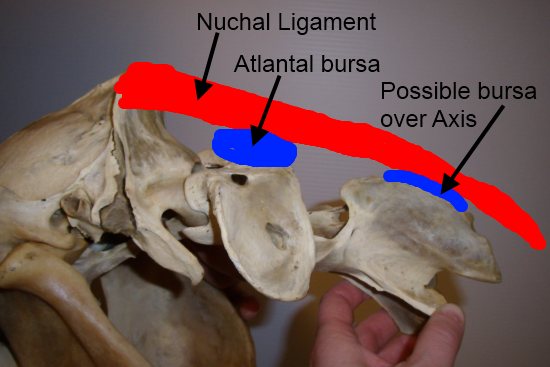 Remember the nuchal ligament from the last post?  Well, here’s a picture with real bones. It starts on the occipital bone at the top back of the skull and doesn’t connect directly again till T2 or T3.  So it passes over the atlas and axis in close proximity but without connecting.  There is, however, a bursa between the atlas and the nuchal ligament, and sometimes there is one over the axis as well.  After that the funicular part of the nuchal ligament is high enough up that it doesn’t contact the vertebrae at all.  (The lamellar part, however, does attach to the dorsal spinous processes of most of the cervical vertebrae.  See the last post for more explanation.)

So how does this apply to saddles and trees?  Well, it doesn’t directly, but the muscles that run along the vertebrae continue down the back and so the movement of the neck does affect the shape and movement of the back that way.  And the position of the head and neck has a huge impact on the whole supraspinous ligament system which really affects the rest of the back.  We’ll talk more about that when we move to the thoracic vertebrae.