Position - Seeing the shoulder blade under saddle Part one 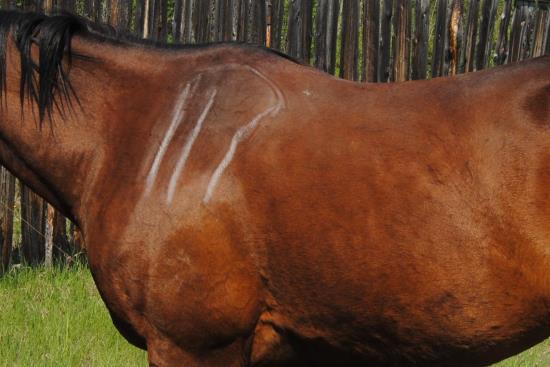 Why did we bother writing a blog post to help people learn how to find the shoulder blade, either in real life or in pictures? Because it is really important to the horse that the saddle doesn’t sit over the shoulder blade. If it does, it will compress muscle between bar and bone and cause damage, as we wrote about a while ago. So once you are able to see where the shoulder blade is on a bare horse, the next step is to see it when the horse is saddled. That’s tougher, because your “X-ray eyes” not only have to look through skin, but also through padding and the very front of the saddle. 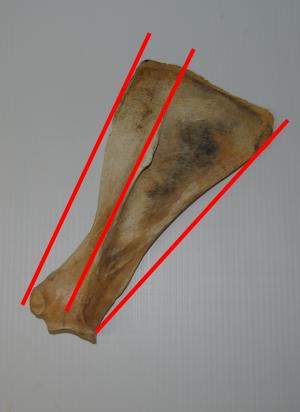 Key points to remember in seeing the shoulder blade – the spine of the scapula is pretty much always visible unless covered by blankets, etc. and it is parallel to the muscle which covers the front of the shoulder blade. The scapula itself is a triangle, with the top back corner being quite a bit further away from the scapular spine than the front. Remember, this is very, very important… 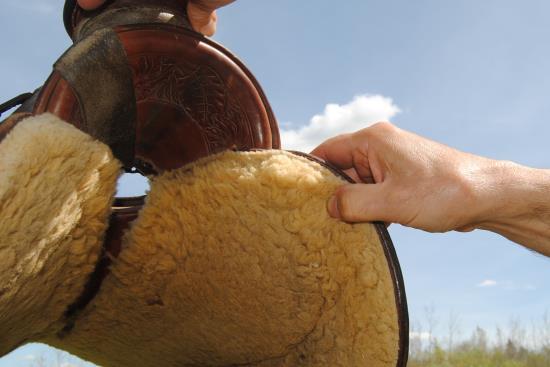 Before we look at saddled horses, we need to first look at saddles to “see” the front bar tip, since that is the key in positioning the saddle correctly. The skirts will extend past the front bar tip a varying amount depending on how the saddle was made, but usually it is one to two inches. If the saddle maker formed the skirts to the bars, called blocking the skirts, you will be able to feel where the bar tip ends through the shearling and skirts. (Blocking is a necessity for a good saddle, but is not a common practice with mass produced saddles since it takes time and therefore costs money.) The tip of Rod’s thumb marks the front of the bar on this saddle. 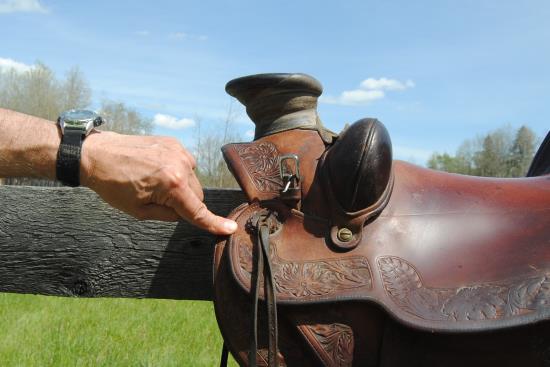 When you transfer that spot to the top of the saddle, you will see that the front bar tip extends past the front button/rosette/concho (whichever you call it). The tip of Rod’s finger shows you the spot on the top of this saddle. 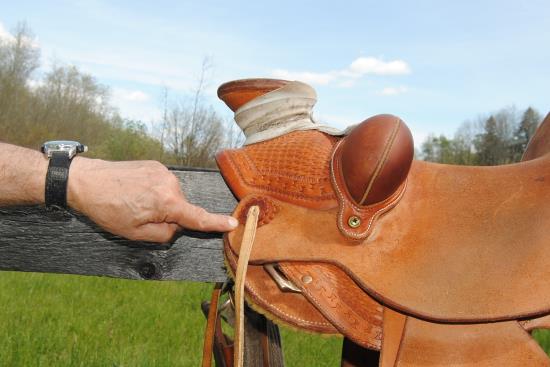 And also on this saddle. Note the difference in distance between the rosette and the bar tip on the two saddles. This is why you can’t just go by the rosettes, though in pictures they do give you at least a ball park idea as to where the front bar tip might be. 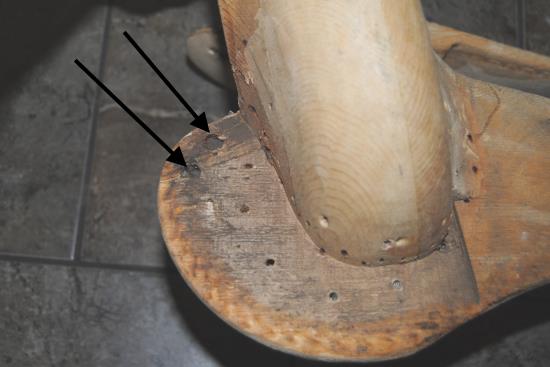 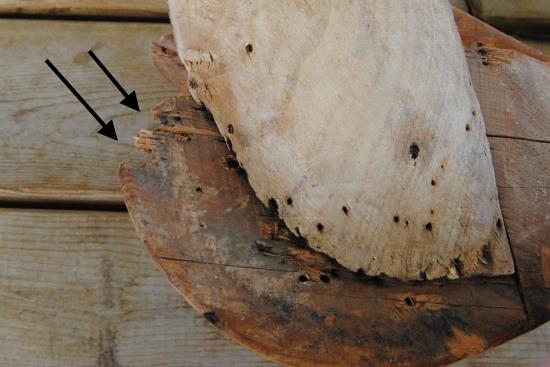 Here’s another one. They almost missed the front of the bar on this one… 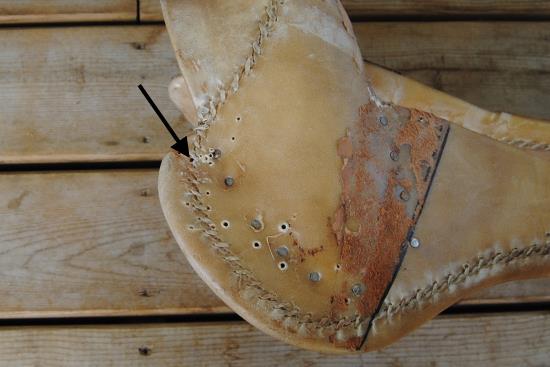 And here’s one that wasn’t drilled through but screwed on. (“To drill, or not to drill. That is the question…” Saddle makers argue among themselves about this, and good makers fall on both sides of the debate, which means to me that there are good things and bad things about both ways of doing it...) The rosette here would have been pretty much at the top of the bar. It’s good to see the variation there can be. It isn’t much, but sometimes that ½” makes a difference… 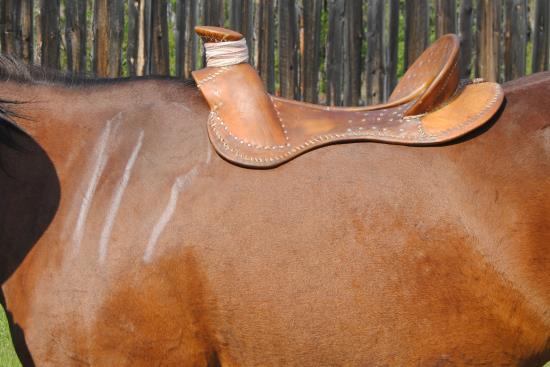 For those of us used to seeing bare trees on horses, it is also good to realize that they actually sit higher on the back than we usually see them. I know that we know this, but seeing something always reinforces it in our minds. While with no padding, it looks like the front bar tip is right behind the most caudal (closest to the tail) part of the shoulder blade 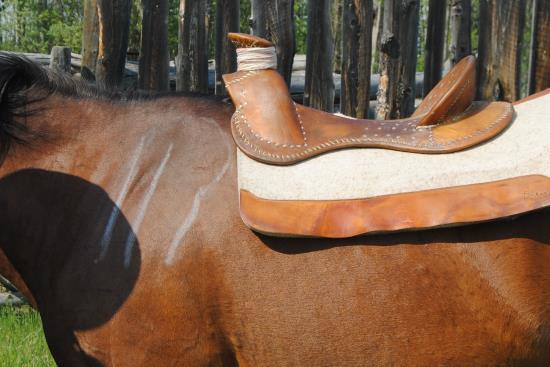 when you add padding, you see that it is actually up above it. Here we have a 1” pad under the tree. This would probably be equivalent to a ½ to ¾ inch pad under skirts with their shearling. Compare the point where the gullet joins the bar to level on the horse. 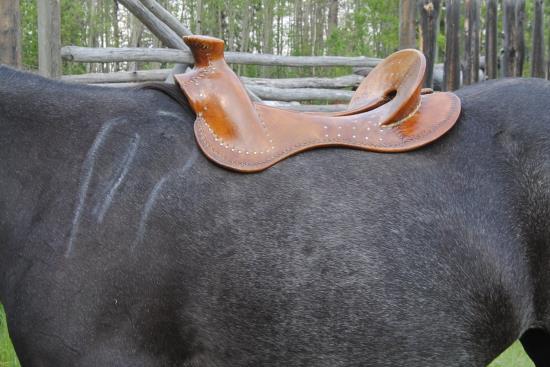 Here’s another horse with a bare tree. It looks a tad downhill on her. 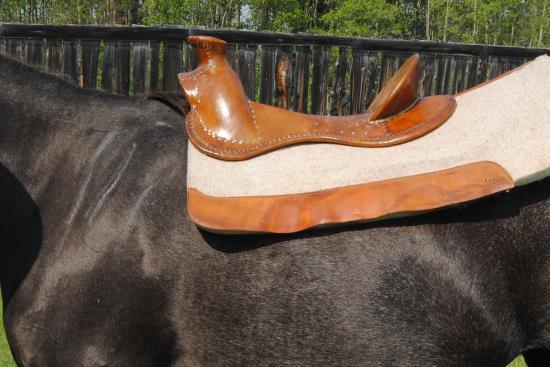 And with the same padding. Something else to notice is that the tree levels out a bit compared to having no padding. Padding raises the front more than the back. How much more varies with the conformation of the horse and probably other factors too, but it is something to know if you are looking at bare trees on horses. 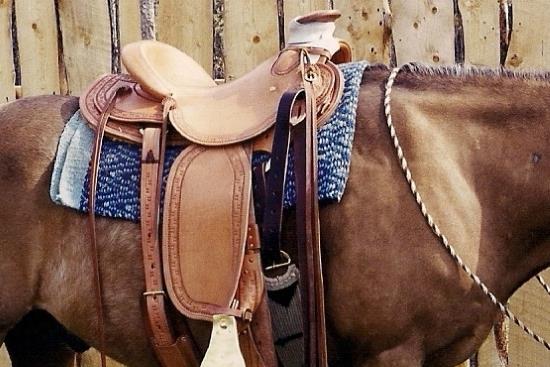 So with the last blog post about seeing the shoulder blade, the information on the saddle construction, and the visual of how padding affects bar position relative to the horse, let’s try to see some shoulder blades. Even with all the paraphernalia in the way. Here’s an easy one. Can you see it? 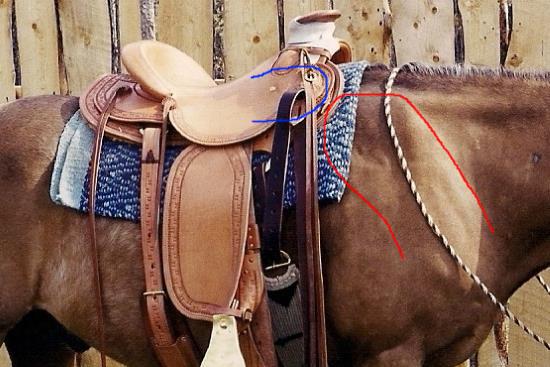 Here’s where I figure it is, and where the front bar tip rests relative to it. 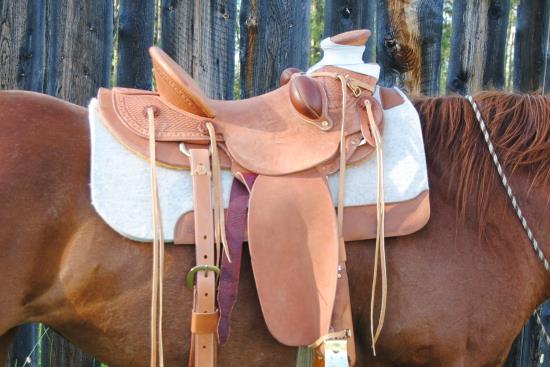 Here’s another one, a bit harder. (Yeah, it’s the same mecate…) 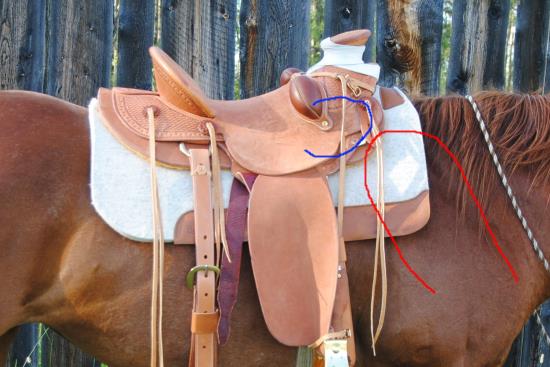 So why is this idea of the position of the saddle behind the shoulder blade so important? I'll show you in the next post...

Posted by Sammy on Jun 10th, 2015
Love this article. Visual is good!
Posted by Sabrena on Jul 19th, 2015
This is very helpful, as I've been struggling with correct saddle placement on my mule.
Posted by RodandDenise on Jul 19th, 2015
Glad we can be of help!
Posted by Eleanor Eagly on Aug 20th, 2016
fine fit for a horse standing still, but what about when the horse moves? The front upper portion of the scapula in some horses moves may move several inches. Do you make some allowance for the movement of the scapula? I estimate it by having the horse pick up its foot, and assist it in extension and mark the new position, of course it he rear edge comes further back but lower than the rim of the saddle tree it would be of no consequence. Angle of the scapula would play a role.
Posted by RodandDenise on Aug 20th, 2016
Eleanor,
If you continue to follow the links, you will get to the following post which shows, with pressure data, that once the horse has no weight on the leg, there is no pressure between saddle and scapula. Thus the scapula can rotate underneath the saddle without a problem. By the time the horse has weight on the leg again, it is out from underneath the saddle. That is, if the saddle is positioned behind the shoulder blade when the horse is standing still. So trying to position the saddle well back of the shoulder blade isn't needed, and it won't stay there because they aren't shaped to fit there. Here's the link: http://www.rodnikkel.com/content/saddle-tree-blog-from-shop-and-desk/rethinking-saddle-fit-and-shoulder-blade-movement/