A special saddle for a special lady 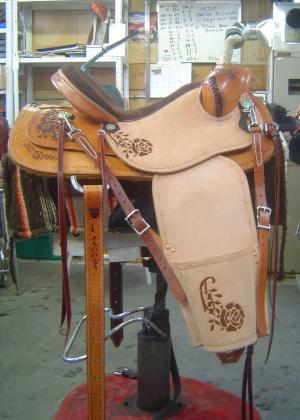 A while back we posted a picture of a special tree for a special lady.  This rider had her right leg amputated above the knee after a car accident.  You might think that would limit the riding she could do.  Not if there is a will to do more!!  She team ropes, which is OK since the horses turn left and she still has that leg.  But she is looking to get into barrel racing, which of course means fast turns in both directions, so that takes a bit more planning to accomplish safely.  And she will be able to do this with the modification of her equipment compared to a normal saddle. 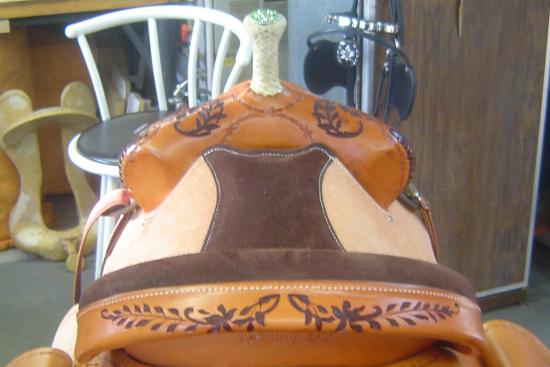 The maker of this saddle is Stan Wheller, of Stockman’s Stall in Killam, Alberta.  Stan was kind enough to send us these pictures of the finished saddle.  When we talked with him about what they needed, they asked for 14” swell on an Old Moose style tree with a bit more undercut than he was used to getting so she could grab the swell with her upper leg if she needed to for stability.  That was also the reason for the taller, small capped horn – something easy to grab if her horse ducked to the right since she has minimal holding power with her prosthesis.  So we did nothing really unusual with the tree that would make it unridable by someone else.  (Just for the record, that is not one of our trees in the background.) 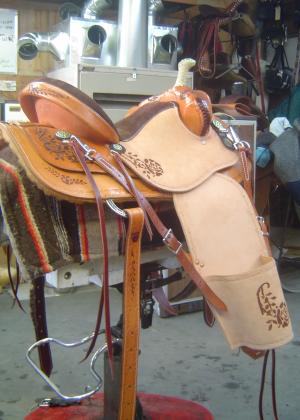 The saddle maker made something pretty unusual though.  Instead of a normal stirrup on the right side, he made a modified flag holder big enough she could insert the bottom end of her special riding prosthesis.  She had the prosthesis made because her normal, walking one doesn’t bend the same way a real leg does when sitting on a horse.  It sticks out to the side too much.  So she has this special one that curves down the side of the horse like a real leg does.  But because she has no feeling in her prosthesis, it is really difficult for her to keep her foot in a normal stirrup or to pick it back up if she loses it.  So this “bucket” arrangement works well to set the leg in.  The straps ahead and behind are designed to keep the fender and leg from swinging back and forth or away from the horse too much with fast movement.  Since there are no straps or anything holding the leg in, there shouldn’t be a problem releasing the leg if she ever comes off the horse unexpectedly. 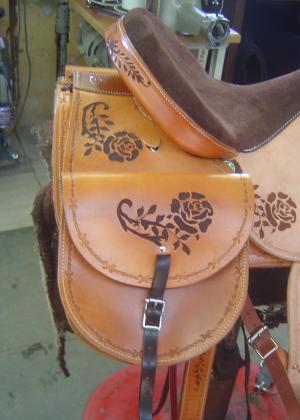 Apparently this rider gives talks to amputees at the Glenrose Rehabilitation Hospital in Edmonton about what they can do if they want to, and how to remove the limits they may think are there.  Looking at how she approaches life and the perceived obstacles that are there, I think she is a great role model!!

Posted by Julie Cato on Feb 12th, 2017
This is incredible!! I have a friend of mine who has been riding her whole life and lost her leg above the knee. She has a lot of difficulty with the weight distribution and the balance!!! Could you contact me back so we can chat? On how to get a saddle like this for her?
Posted by RodandDenise on Feb 12th, 2017
I've sent you a message!