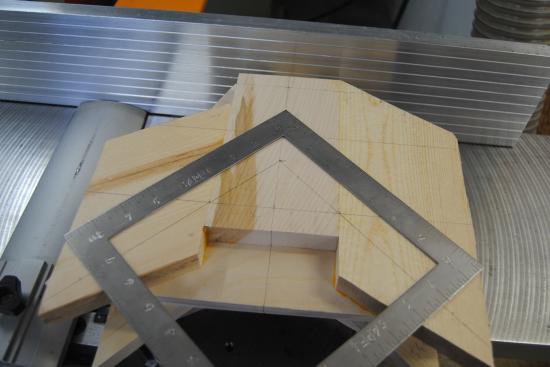 I marked out the next four trees for Rod today using some special "made to order" tools that we have had for a few years now.  The major part of my job in the shop is to take the wood from rough lumber to laminated blocks of wood, marked out with the appropriate pattern and ready to cut on the band saw.  Over the years we have used, devised and had made for us different tools especially designed for what we need to do.  The metal T square and specific angle markers I use make me much more confident in the accuracy of my markings, and have sure made my job a lot easier. 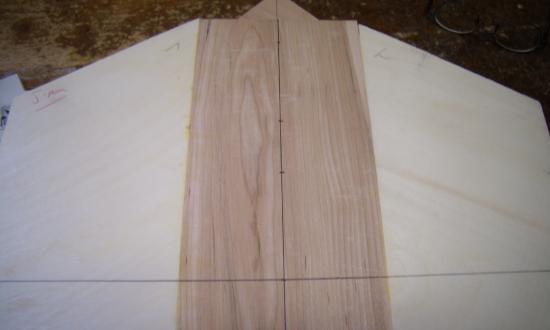 Whether it is a cantle or a fork, we always start out by marking out a vertical center line and a horizontal line exactly perpendicular and even on both sides to make sure the pattern is totally symmetrical. 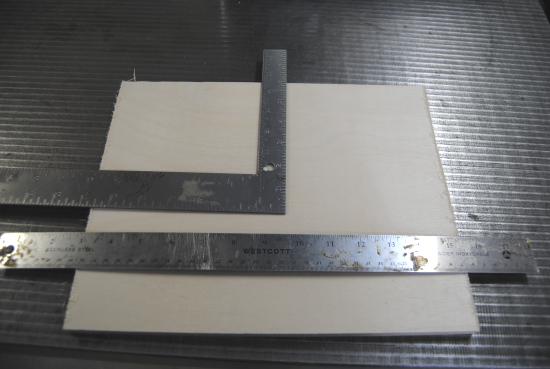 What is available commercially is only an L shaped square, and most of them aren't really square either.  So I would have to use the L square to draw the center line and half the horizontal line, then use a ruler, lined up as carefully as I could, to draw the other half of the horizontal line.  It worked, and because I was careful I'm sure I was never very far off, but it was a pain and took time and I always wondered if it was exactly square or not.  (No, I'm not neurotic.  Why do you ask?)  Then I would have to use a ruler to mark out the other measurements before drawing on the outline pattern. 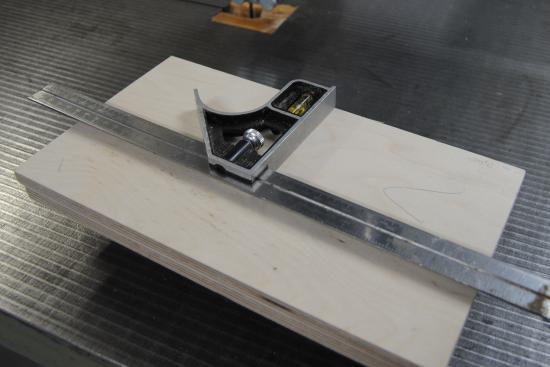 So I looked for a square that was a T rather than an L shape.  Did you know all that is commercially available are the kind that are offset so you can rest them against the edge of a board?  This is not helpful when you are trying to mark out a flat piece of wood as your pencil can angle in or out enough as you mark along the edge that it will affect accuracy.  (Obsessive, me?  Nah...) 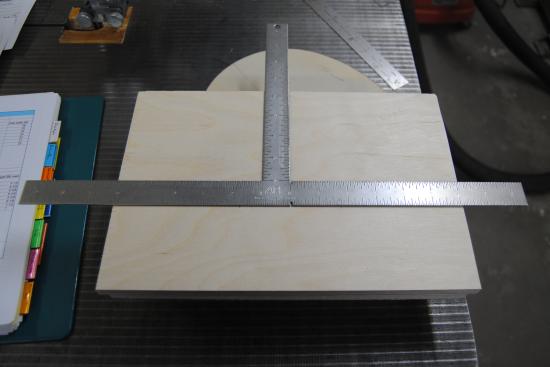 So we came up with the idea of a flat T square.  You can mark out vertical and horizontal lines at the same time with only one tool!  Amazing, eh?  This was made for us by American Precision Fabricators and machined very precisely.  Since the cost in making these is in getting the markings exact, we had them mark it in 1/16" for most of it, but down to 1/32" in specific places where I knew I wanted the extra precision.  (No, I'm not fanatical.  1/64" would be fanatical...) 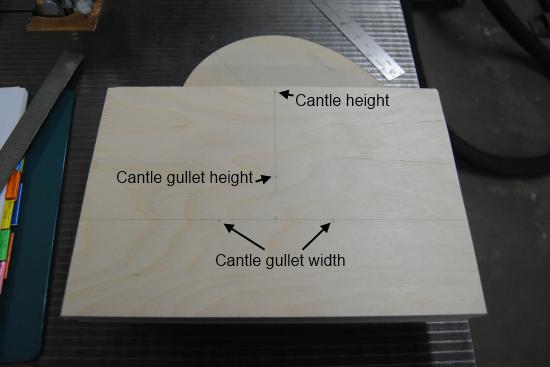 So here's a cantle after drawing only two lines and four ticks - five if you count the center tick at the bottom drawn in the little divot they took out of the bottom of the square so a mark there would line up evenly with a line traced along the edge of the vertical leg.  I can set the square the correct distance from the bottom of the cantle, draw the horizontal and vertical lines, knowing they are precisely 90 degrees from each other, then make ticks at the correct cantle gullet width and height and the correct cantle height, all without moving anything.  Much faster, and much more accurate.  (OK, so maybe I am a little fixated.  Who's to notice??)

We actually submitted this idea to Lee Valley Tools, who make tools based on customer suggestions at times, to see if they wanted to produce these commercially.  They thought about it for a while and even researched the idea.  They said that no, there is nothing like this available anywhere, but they also didn't feel there was enough of a market so they decided not to make them.  Therefore - here's a marketing opportunity for someone who wants to run with it!  All we ask is a "small" percentage for intellectual property rights... :) 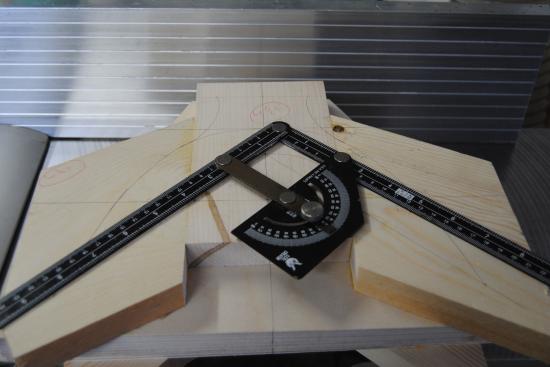 We hit the same problem with protractors when trying to mark out exact angles for forks and cantles.  Almost all are offset at the connection point, which isn't ideal for marking out flat wood. 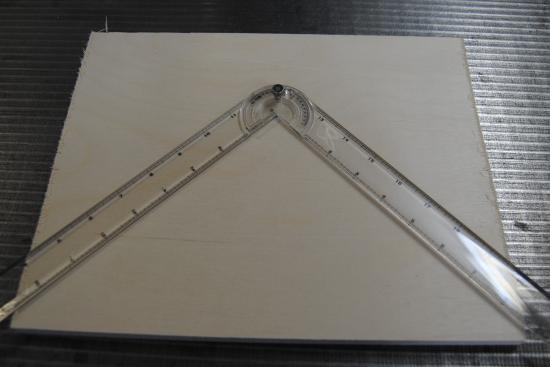 Then we found this one which is flat!  That was a big improvement, but... it was still plastic and because I was setting it every time, there was always the opportunity for a bit of error.  (You're thinking I'm paranoid again, aren't you?) 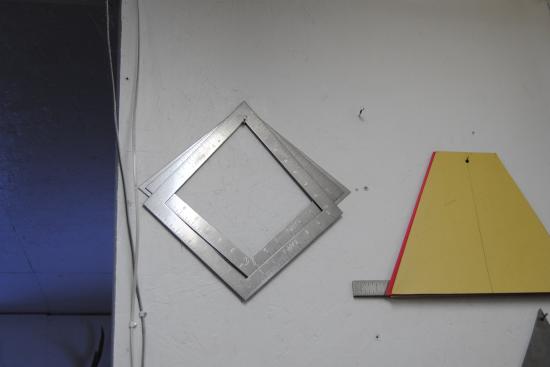 So we had American Precision Fabricators also machine some marking tools at very specific angles for us.  They put two angles per tool and we have three of them in total. (They were very patient with my multiple, very specific requests...) 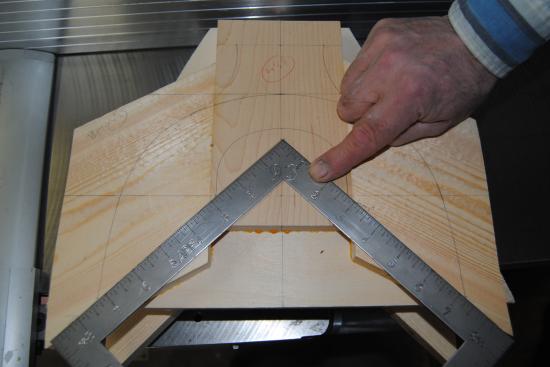 We use most of them to mark out the fork to set different bar angles.  Since these can be only two to three degrees different from each other, precision is necessary.  (It's OK to be very, very specific here!  Really!!)  The T square is used to set the 90 degree bar angles, but we have these tools for the other angles we use. 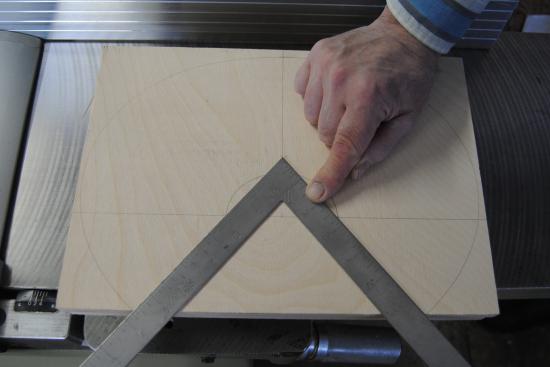 Then there are the angles for the cantle - one angle for a regular cantle and a different angle for a Taylor cantle.  I again asked for marks to be made at 1/32" intervals on these angle tools in the areas I use to line them up evenly, triangulating them between the center line and the two evenly spaced ticks on the horizontal line.  This makes me very comfortable that I have things totally symmetrical side to side.  (It satisfies my compulsive tendencies...)

So while our original marking tools were good, I really enjoy using the special order ones.  I am much more comfortable with their accuracy and know that I am always consistent when I use them.  And for the odd occasion when we need yet another angle, I still have the old ones to fall back on.  After all, you can never have too many tools in a shop, or be too accurate.  (Can you?)