Putting the spine together 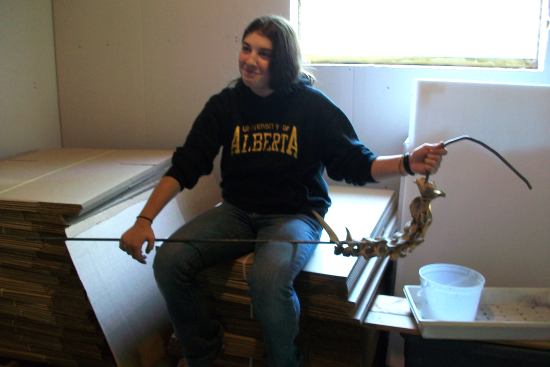 Once we were finished putting together the front leg and the hind leg, we set them aside and it was on to the spine.  We set up all the vertebrae in order so we had a general idea of the final length.  Then we got a 3/8” round steel rod which fit nicely through the vertebral foramen (the holes in the vertebrae where the spinal cord goes). 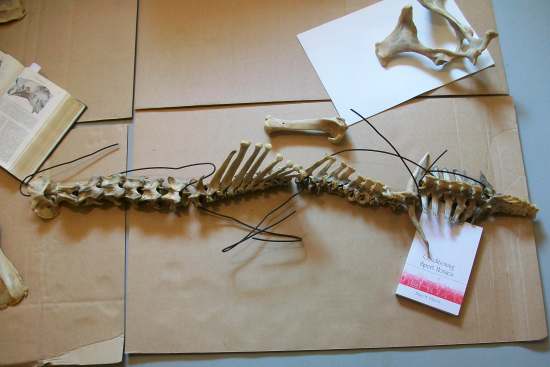 So, how did we know the order the vertebrae went in, you ask?  Well, I cheated.  When we were starting to boil out the bones, I broke it down into sections and put good old #9 wire through the vertebrae to keep them in order.  But actually, we found that we really could put them back in order quite easily.  There is enough variation between them that you can see where they should go.  And if you do make a mistake, they fit together so well that if you can tell if it isn’t right.  The jig saw puzzle just doesn’t go together that way. 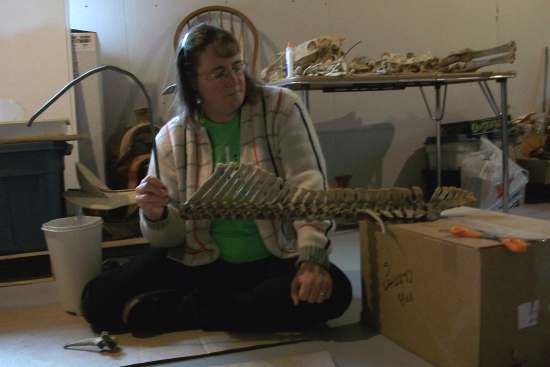 The spinal cord as such ends before the spine does, and from it come a number of nerves that gradually disperse out through the rest of the spine.  (For interest’s sake, this bundle of nerves is known in all species as the “cauda equina” since it sort of looks like a horse’s tail.)  So the hole in the sacrum gets pretty small at the end which meant that the sacrum stuck quite nicely on the end of the rod.  Then we slid on the vertebrae in order to see where the different sections would end up, and Rod bent the rod to the shape the spine would end up being. 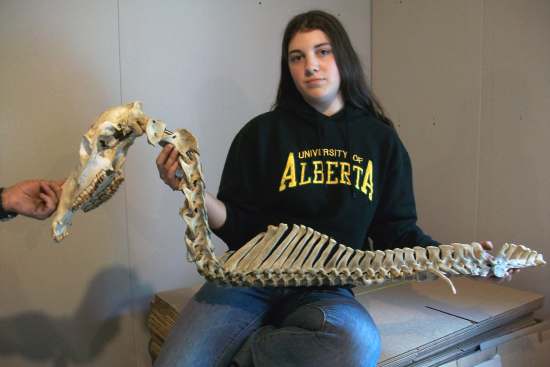 We compared anatomical drawings from different sources to see the shape and played around a bunch to get it right.  Finally, we slid on the skull as well and it looked pretty good.  We couldn’t tell if we really had it right until we had the ribs all on, which was almost the final thing we did.  At that point we discovered that we had started the curve on the neck a bit early so the first couple of ribs are at the wrong angle, but at that stage, we weren’t going to take it all apart and start over!  If we were going to do it again, we would probably add a tiny bit of curve throughout the thorax and lumbar areas, but overall we were pretty happy with the way it turned out. 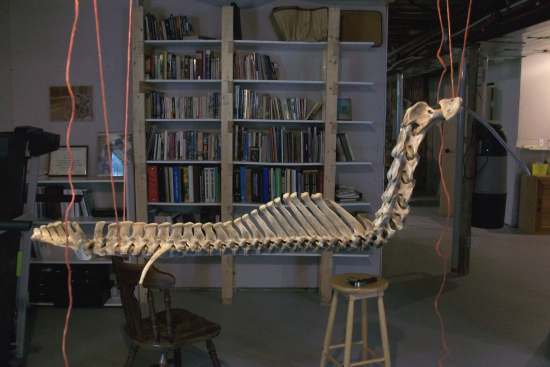 To actually put it together, we hung the rod from the floor joints in the basement.  Then we hot glued the sacrum onto the end of the rod and each vertebra onto the one behind it in order after that.  I had bought some thin foam to replicate the cartilage and discs between the vertebrae, but even that turned out to be too thick, making the ribs not fit properly.  Of course, the cartilage on the rib heads and in their sockets was gone too…  So it ended up that just gluing the vertebrae together worked the best. 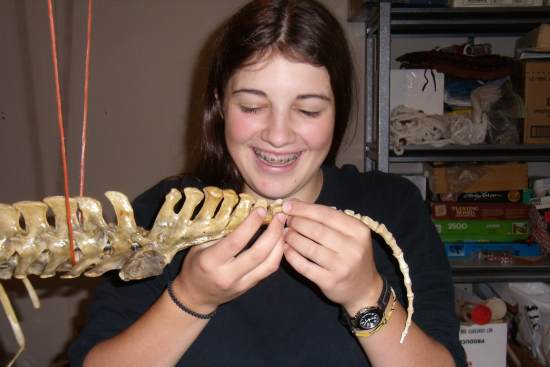 The last part of the spine to be added were the caudal vertebrae which make up the tail.  Rachel glued them together and then glued them all on when we were putting everything together at the end. 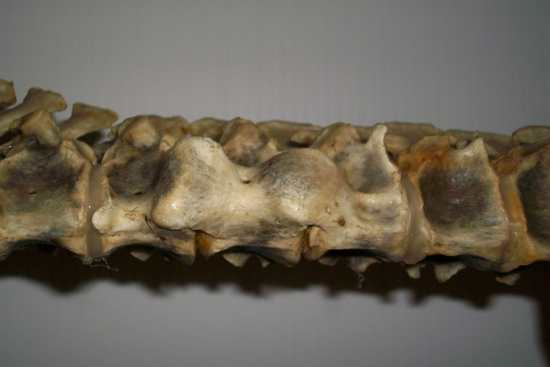 We found a few interesting things in the skeleton.  One is that three of Arnie’s thoracic vertebra were fused together on the bottom left side.  Turns out he had been in a wreck with a cart at some stage and maybe that is when he had damaged his back badly enough that the vertebrae eventually fused.  This picture is from underneath the spine, looking up.  You can see the glue where the disc spaces used to be, ahead and behind the fused vertebrae and even on the right side of the fused vertebrae.  There is even a lip of extra bone starting over the disc space ahead of (to the left of) these three, showing that the next one might have fused over too, given enough time.  There were also other signs of arthritis throughout his body. 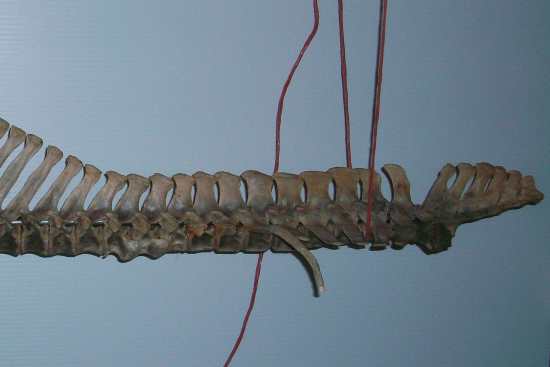 Another really interesting find was the extra pair of “ribs” Arnie has.  There is a lot of anatomical variation in all species.  In fact, both our skeletons have variations in the vertebrae.  When we were initially dissecting Arnie, I told Rachel that horses have 18 pairs of ribs and said “Count them.”  So she did.  Nineteen.  Hmmm…  It wasn’t until we were boiling out the bones and the last pair of “ribs” didn’t disarticulate that we found out that they weren’t extra ribs at all, but modified lateral processes of the first lumbar vertebra that were shaped like, and connected like, real ribs.  Interesting…

And if some of the terminology in the last paragraph is new to you, I’ll explain it in the next post about vertebrae.