Posted by RodandDenise on December 7, 2012 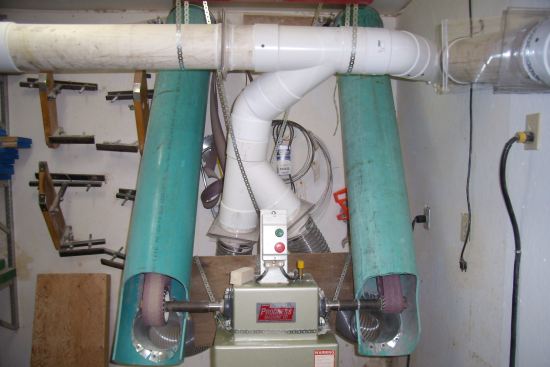 I have done posts on the jointer/planer and the BIG BAND SAW  (twice!!) but I haven't yet talked about the belt sander.  This is the last major piece of industrial equipment in our shop which runs on 220 power which is used in making the trees.  (The dust collector, which I kind of talked about here, also runs on 220 but isn't used in actually making the trees, so it doesn't count...) 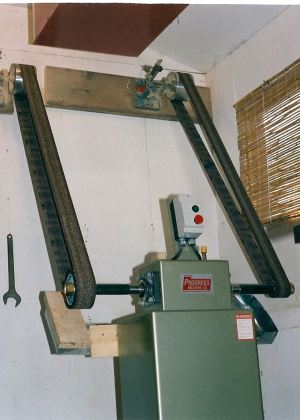 This is what it looked like when it was brand spanking new in 1996.  It is made by the Progress Machine Company in Toronto (I can't find a website for them) and it is really designed to be a pneumatic drum sander - hence the long arms out the side.  But this set up works a lot better for us because the belts are a lot longer.  Of course, when the machine is running both sides are turning but that doesn't do any harm. 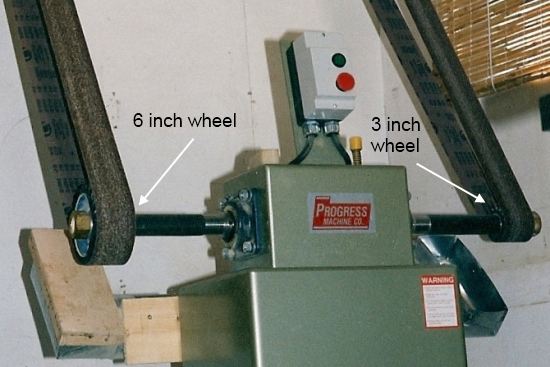 Rather than the pneumatic drums, we got two wheels from Cosmo Wheels in Kentucky (and I can find a website for them either...)  The wheels  are both three inches wide but one is 6" in diameter and one is 3" in diameter.  Rod uses the different sizes for different stages of building a tree, and having the two of them is very useful. 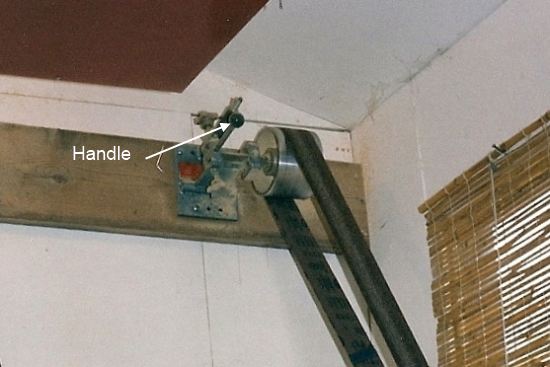 The belts run from the wheels up to stand idlers attached to the wall behind the sander.  We got the stand idlers from the Progress Machine Company as well.  They are spring loaded so if you pull down on the handle, it loosens up the belt enough to change it.  You can also adjust them a bit to get the belt centered and running smoothly. 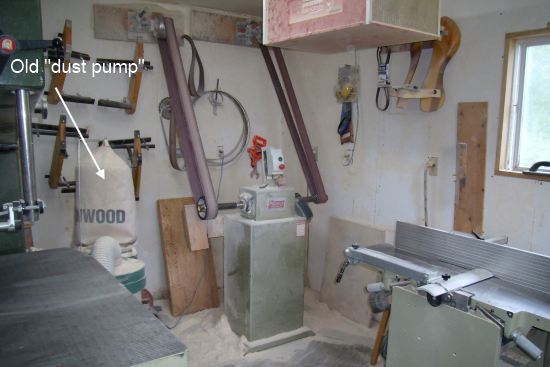 Before we upgraded our "dust pump" to a proper dust collection system, this is what it used to look like in that corner.  We had inches of sawdust build up which we would clean out regularly and which would build up pretty quickly again because this machine gets a LOT of use.  So how to collect dust at the source from something with belts that are 132 inches long? 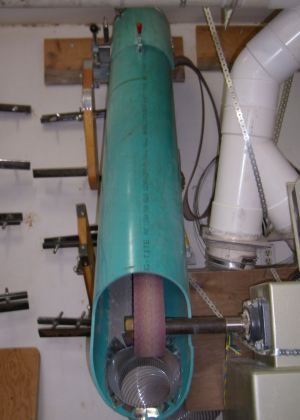 We used 10" pipe (courtesy of our handy-dandy neighbourhood neighbour who has EVERYTHING in his yard!) to totally enclose the belts - that's how!!  We closed up the top end and we cut openings at the bottom the right size and shape to allow Rod to use the wheels the way he needed to. 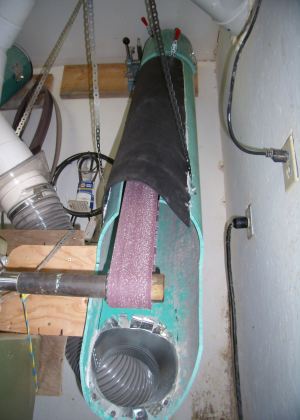 This worked well for the 6" wheel, but Rod needed more room to get under and around the 3" wheel, so he creatively "expanded" the size, using an unknown type of black plastic, also from our handy-dandy neighbourly neighbour who has EVERYTHING in his yard.  (It took some creative hanging too...) 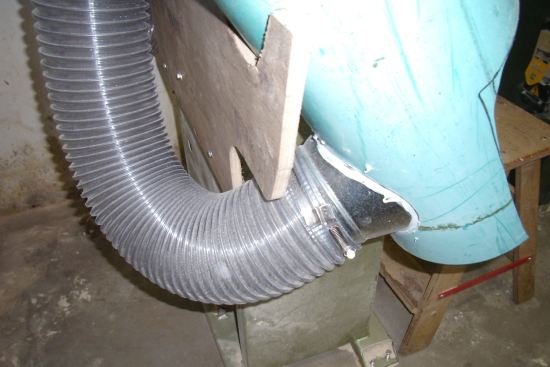 Then we attached HVAC fittings to the bottom of the pipe and connected them to the flex hose which connected to dust collection system.  So the only exit for dust is down, and that is where the massive suction of the cyclone takes it away.  And it does get all of it.  Believe me, our dust collector sucks!! 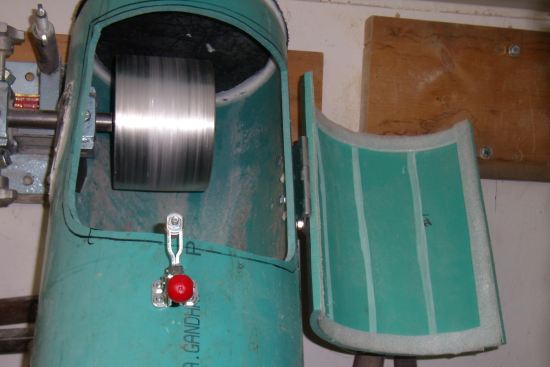 But we still needed to have access to the stand idlers to change the belt.  (There is no belt in use in this picture - obviously.)  So Rod made access doors in the top.  (By the way, you can see how the top is enclosed and sealed here.)  We put weather stripping inside the doors to keep them as air tight as possible.  There is an opening in the side to where the connection to the rest of the stand idler is outside of the tubing, but when the cyclone is running, it sucks air in that opening!  No dust comes out there. 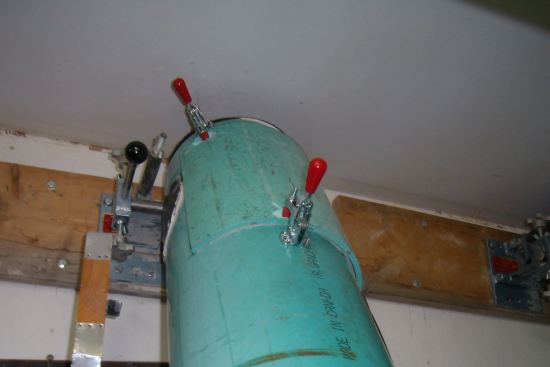 The doors latch with toggle clamps from - no, not the handy dandy neighbourhood neighbour this time.  It was Lee Valley tools...   They keep the door very tightly closed.  So changing the belt is a bit more hassle now as he has to open and close doors and put the belt down the enclosed tube, but that is a small price to pay for being able to breathe.  The belt sander is now the cleanest piece of equipment in the shop - bar none. 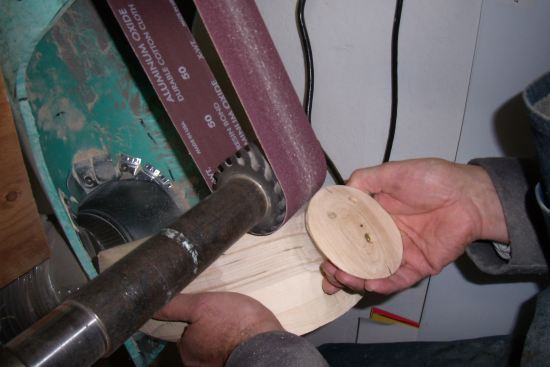 Rod uses the small wheel in areas that have smaller curves, like around the horn, 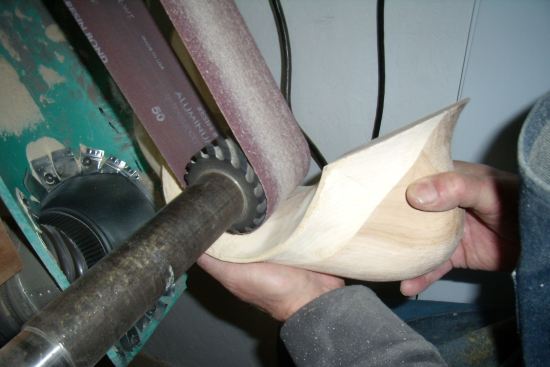 inside the fork gullet, 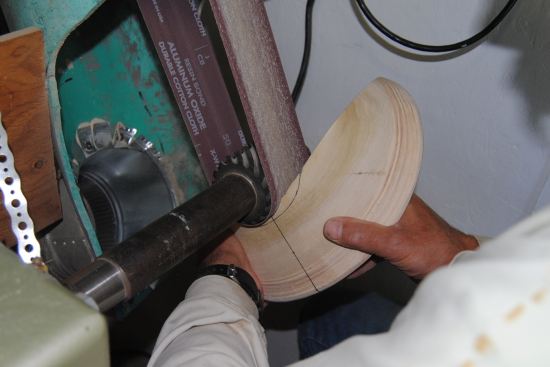 and the cantle gullet, 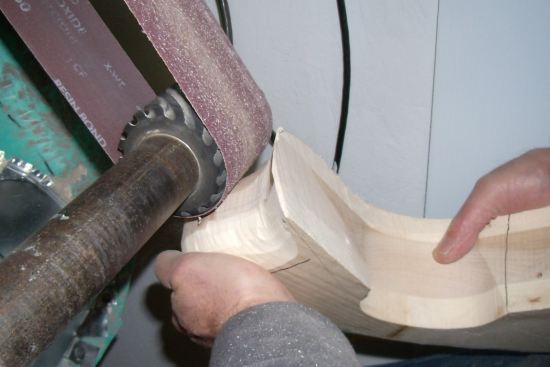 and sometimes for the front and sides of a fork, depending on the shape he is carving. 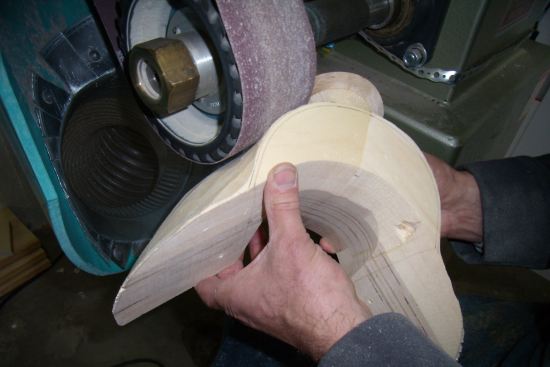 He will also use the large wheel for the outside of a fork when he is making more gradual curves. 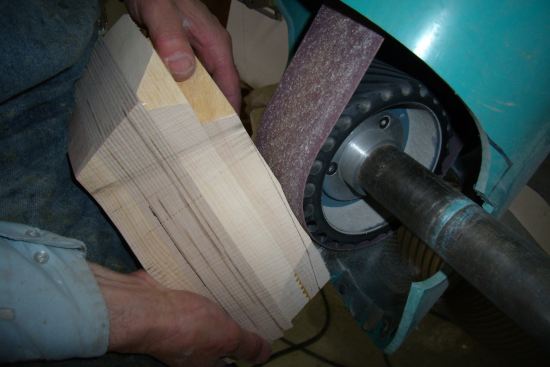 The large wheel is used to shape the back cut on Wades and other forks with thicker stock so they slope back nicely into the front of the bars, leaving enough room for the saddle maker to put on his conchos.  This also makes for a prettier looking tree. 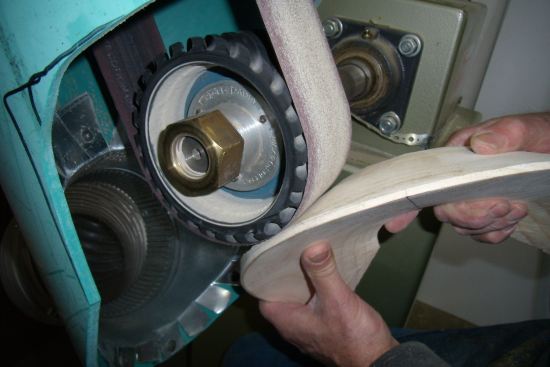 And he uses it to shape the back of the cantle. 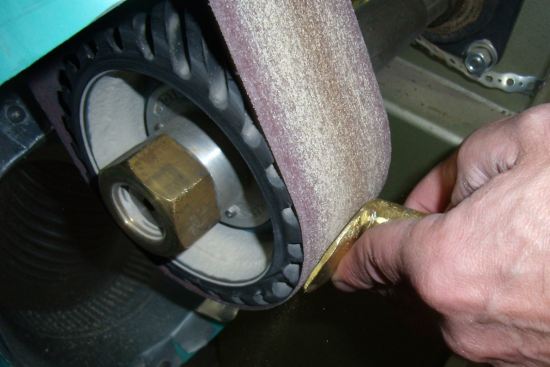 He changes to an old belt and uses the large wheel when he cleans up and flattens the top of the metal horns before attaching the horn cap.  When working with the metal he doesn't have the dust collection system going because while the chance of a spark getting into the system and the possibility of a fire is small, it is still too great to risk. 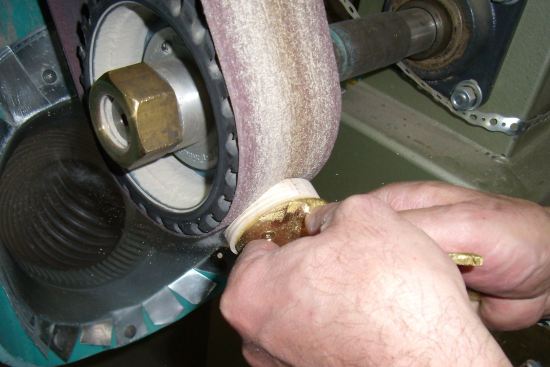 He also uses the old belt to shape the horn caps of metal horns.  An old belt still works well enough and he is glad it is the old one when he hits the small screws that hold the caps onto the horns. 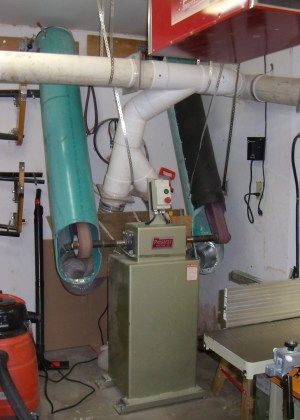 The belt sander gets turned on and off multiple times per day when Rod is building a tree.  Having something that eats wood this efficiently means he originally had to learn how to use it wisely and not "too well".  (It also eats skin pretty quickly...)  But by now he can feather touch it to get it to remove just what he wants and not any more.  Yes, the same thing could be done with rasps and sand paper but, especially with the woods we use, this machine saves a whole pile of time.