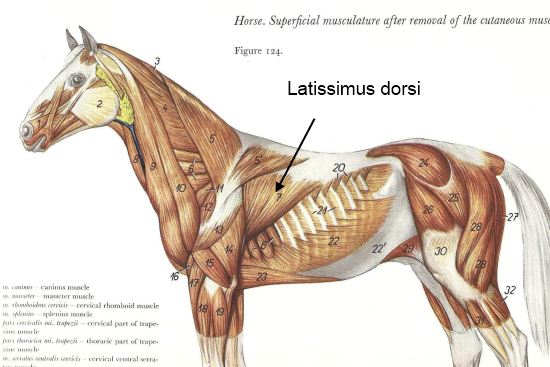 Moving on in our discussion about muscles of the horse that attach the front leg to the horse, a major one is the latissimus dorsi.  This muscle is a very important mover of the front leg relative to the horse's body and is also under the saddle and rigging.  So it is a good one to know about. 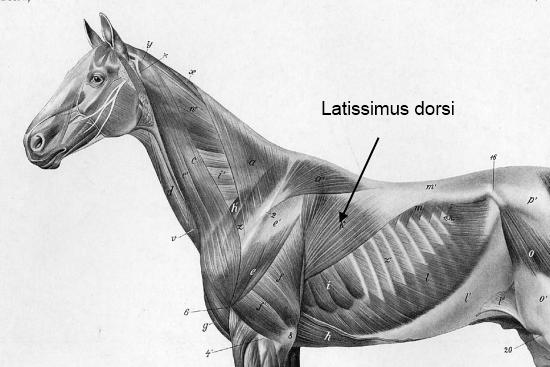 It is a flatter, triangular shaped muscle that originates on the thoracolumbar fascia.  This is the thick, very strong fibrous tissue that attaches to the supraspinous ligament and the spines of the vertebrae from T3 all the way back to the facia over the croup.  So basically it is attached to the top of the spine.  The trapezius lies above it where its front edge lies over the back corner of the shoulder blade.  But other than that and where it inserts, it is directly under the skin and the thin cutaneous muscle associated with the skin.  If you touch your horse in this area, what you are feeling is the latissimus dorsi muscle over top the rib cage for a large part of its area.  (There are some muscles under it along the spine and one under it lower down that we will discuss later.) 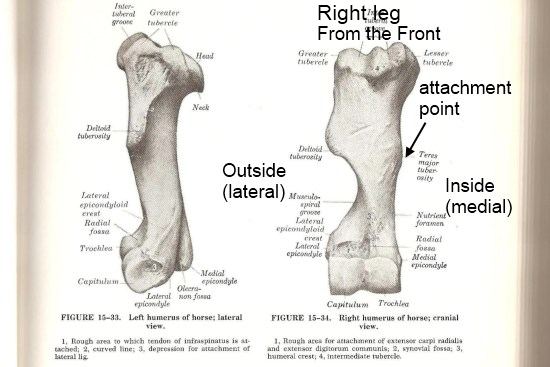 The latissimus dorsi inserts, not on the shoulder blade, but on the bone below it, the humerus.  It actually inserts on the inside of that bone, on a small protuberance called the teres major tuberosity. 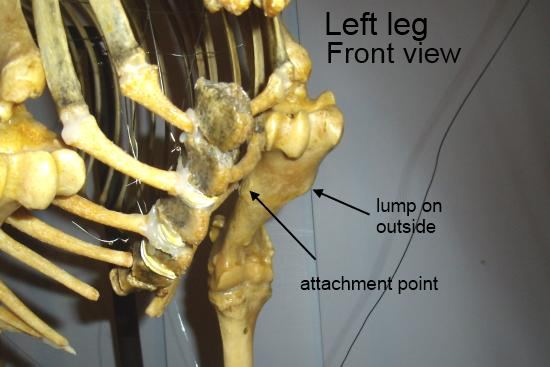 All the lumps and bumps and rough spots on bones are there for a reason, and the reason is commonly a place for muscle attachment.  This spot is where the latissimus dorsi and the teres major muscle both insert.  There is a larger lump on the outside almost opposite, just a little bit higher on the bone, for the deltoid muscle. 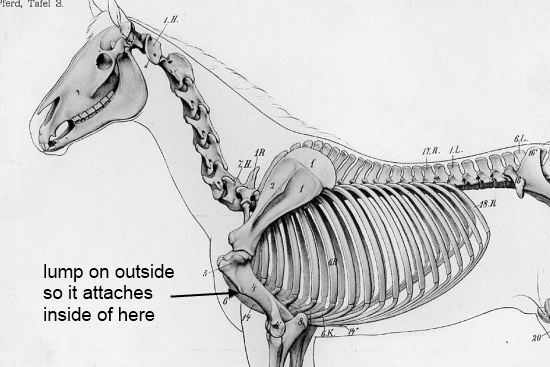 So what does it do?

Knowing that muscles can only pull, when you look at where it sits, you can see that it will pull the humerus up and back.  And since it pulls from the inside, that will help keep the leg close to the body.

But there are a couple results of this action depending if the leg is off the ground or not.

If the leg is off the ground, it will flex the shoulder joint (making a smaller angle at that joint) and lift the leg, especially the elbow, higher off the ground.

But if the horse has his weight on his leg, it pulls the same way, but because the leg won't move, it moves the horse's body forward relative to the leg.  It is the largest forelimb muscle that does this so it is very important in propelling the horse forward. 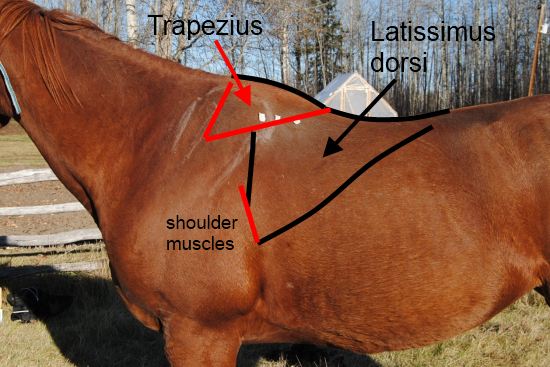 Putting the skin back on, you can see where it sits on the horse.  The front edge is over the back of the shoulder blade and under the trapezius.  So the front of it is prone to the same kind of damage we talked about with the trapezius muscle. 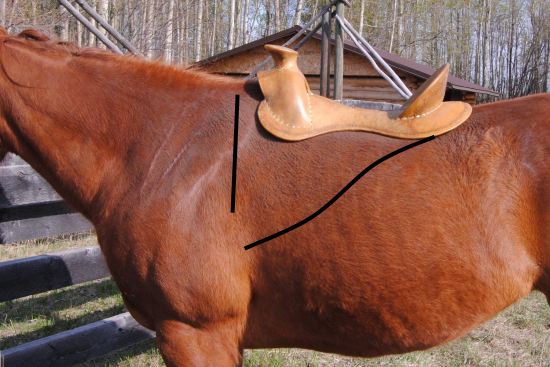 The bars of the saddle sit over its upper edge, so any Poking the bars do will also affect the latissimus dorsi or its point of origin, the thoracolumbar facia. 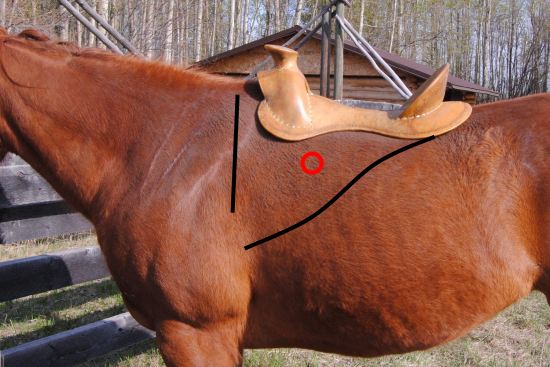 The rest of the muscle is over a lot of the rib cage of the horse.  But look at where the rigging sits - right over the latissimus dorsi.  So if there is pressure over the rib cage from poorly designed or attached rigging hardware or poorly tied or twisted latigos, this is the muscle that will be affected.

So can the saddle and how it is attached cause problems with how the front leg of the horse moves even if the bar tip has enough relief built in for uninhibited shoulder blade movement?  You better believe it!

But there are more muscles that can also be affected...