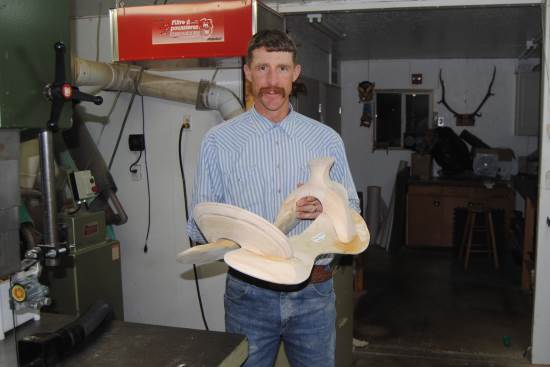 Dusty came to visit us in February to learn to build saddle trees. We knew he was high energy when he wanted to get here so much that he made the plane arrive early and was standing on the edge of the curb waiting for us when we drove up with what should have been lots of time to spare… 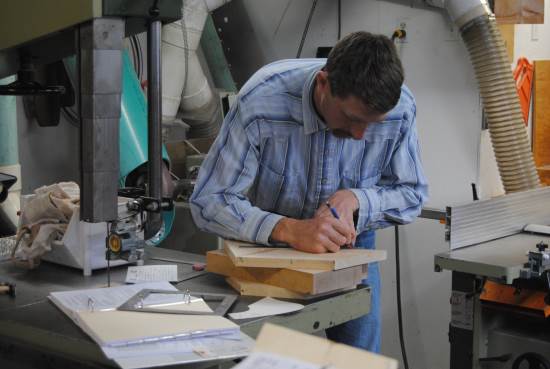 Because he’s been building saddles since 2008, Dusty has a good handle on what a saddle maker wants in a saddle tree. And since he has managed a ranch and trained horses as well, he also knows what he wants a saddle to feel like and how he wants it to work from the top side. He had called and talked with us a few times over the fall and winter, asking very good questions not only about building trees but also about the business side of being a tree maker. So we knew when he said he wanted to come that he had thought long and hard about this and was wanting to do it as a business. 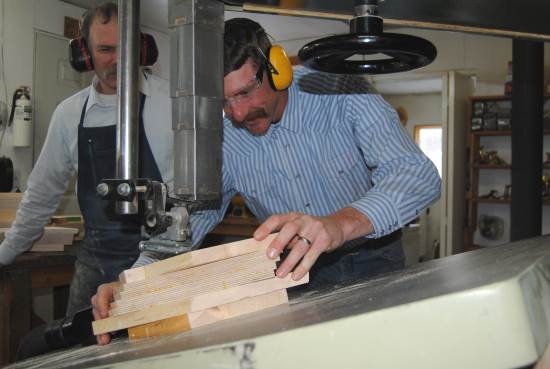 Dusty picked up on all parts of tree building quickly. He had some wood working experience, so using the big equipment came naturally to him. He hadn’t used the carving disc on a grinding wheel before so that was new, but he figured it out. (I don’t have pictures of that because, since he was here in winter, all the grinding was done in the dirty room – which is about the right size for one person. With Rod in there, that made two. Three definitely wouldn’t fit!) 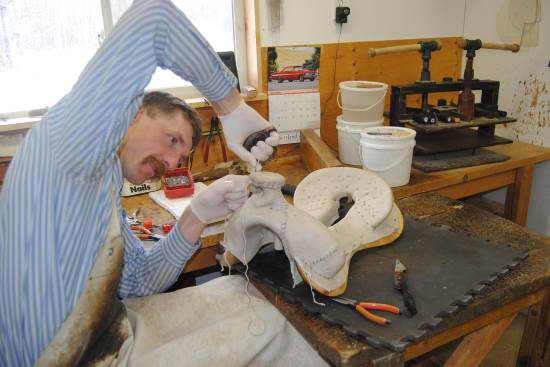 He also did really well with his rawhiding. This is the part that takes the longest to get comfortable with, and he finished his first tree in about 10 hours, which is excellent.  He did a good job on it too!

Doing those cantle bindings for years probably helped with the right-left, zing-pull needed to deal with long lengths of lace when stitching the bars. 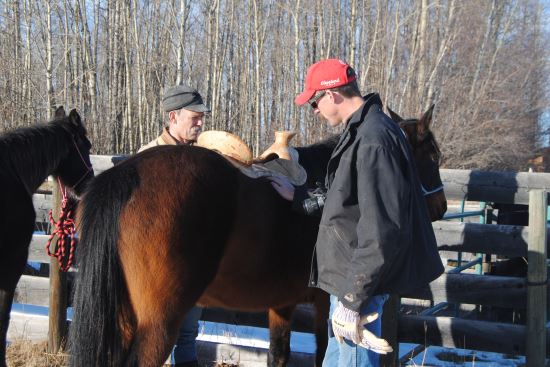 And seeing that he worked pretty much non-stop the whole time he was here, (told you he was a go-getter!) we had the time on a couple of afternoons to get outside and check out horse’s backs and try on trees. This is where Dusty’s height really comes in handy. It is so much easier to look inside when you can actually see in there! 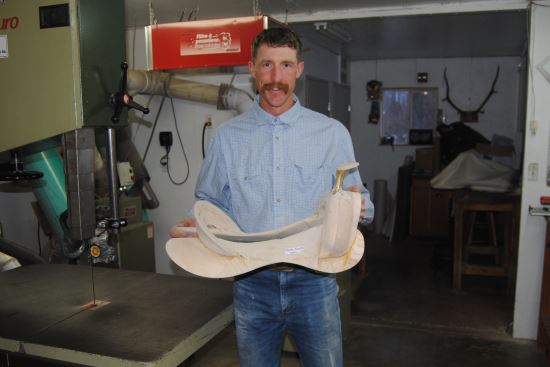 So Dusty got his trees built in good time, smiling all the while. (Well, almost all… I think there was a minute or two with the grinder when he wasn’t quite as happy.) We also spent pretty much every meal going over videos about saddle fitting, different ways people make trees, different ways people measure horses, and the occasional cartoon – just because Rod is Rod... 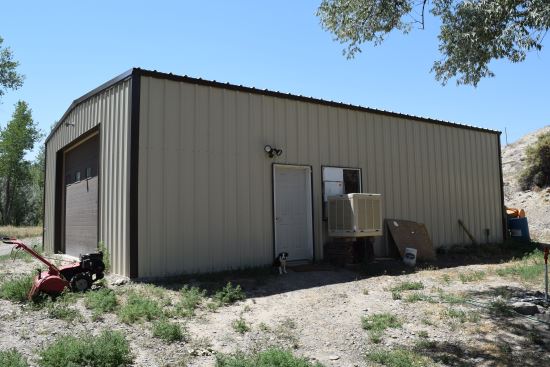 And then he went back to Wyoming, gave notice at his job, bought a place with a nice house and a good shop and is already set up and taking orders as a tree maker!! (See, we told you he is high energy!) 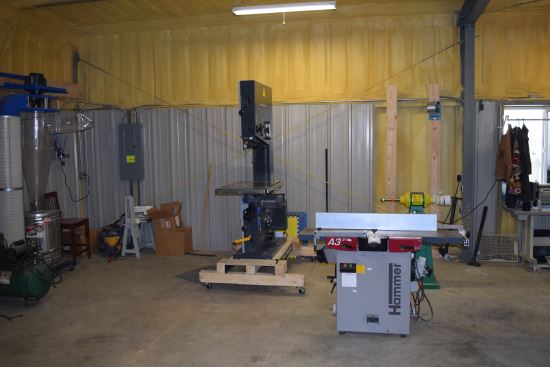 He has his equipment in place. His band saw is smaller than ours, but very adequate. Good thing he has it raised a bit from the normal height. Much better ergonomically, and he’ll spend a fair amount of time there. I just spent a few minutes checking out his jointer/planer. Very nice machine! Looks like the sander and the dust collection system were still getting set up in this picture. Dust collection is very important (since it's the dust that kills tree makers) and it looks like the saddle shop will be in the same building. 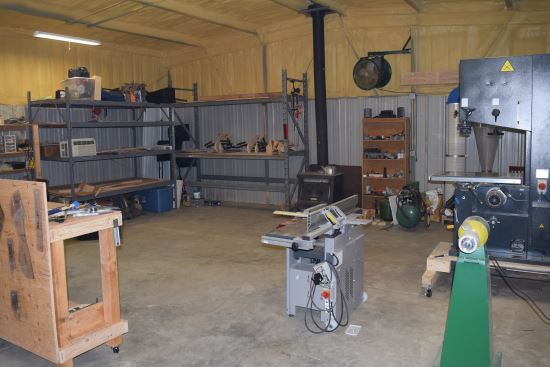 Dusty has a good amount of storage in his shop – though can you ever have enough storage room? And he has all his jigs made up. Making those jigs is critical to getting the trees to fit together properly and consistently and it is all those “little things” that take time in getting a tree shop up and running. 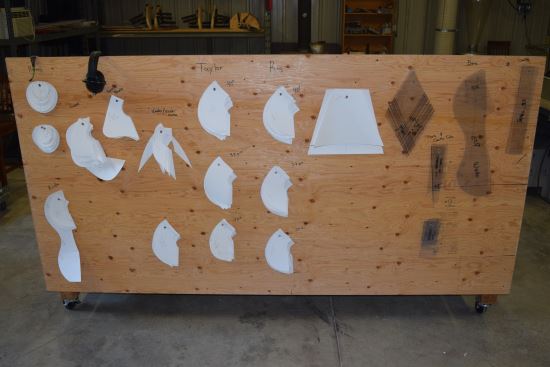 The patterns are all organized and hung up with care (in hopes that some orders soon would be there…) Something we learned about Dusty is that is he an organized person, and that really comes in handy in building trees. The question is, will he get as neurotic as Rod about having everything in order??? 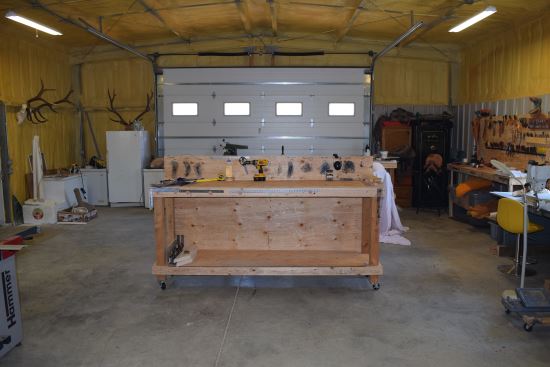 The patterns are on the back of his workbench, which also looks to be set up really nicely. (More patterns! Lots and lots of patterns…) In the background on the right, you can see his saddle making bench. On the left, you can see elk antlers which, by Rod’s own admission, are better than his. And under them you can see freezers for rawhide which are at least partially full by now. 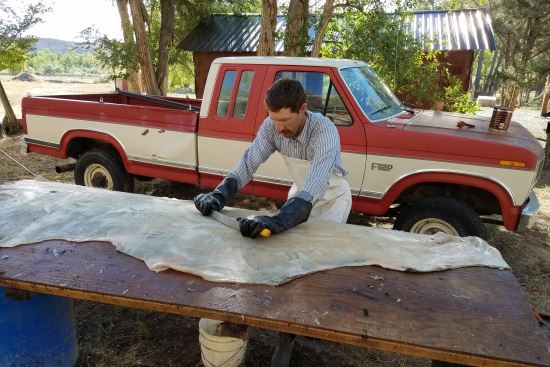 How do we know that? Well, like all our students, we taught Dusty to make his own rawhide, and he has decided that he will process his own hide rather than purchase pre-made rawhide. Here’s proof! 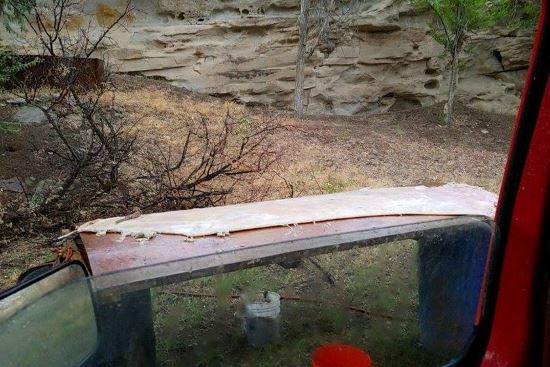 And since he’s already been making it out in the rain, he’s dedicated to it! Well, I guess he was sitting out the shower in the truck, but it looks like he got the job done first…(We spared him the “making rawhide in the snow” ordeal. It was February after all.)

Dusty’s company is WYO Custom Saddles and Trees. You can contact him in a number of ways.

He has a Facebook Page: WYO Custom Saddles and Trees

He is starting up a website: WYO Custom Saddles and Trees The contact information is correct. The rest is still under construction.

It is good to see more hand made, custom tree makers entering the industry. There is more than enough demand for good trees to keep them busy!