Posted by RodandDenise on September 4, 2012

There is a lot of discussion - on the internet, written in books, put into video form, etc. - about how saddles should fit horses.  But for a western saddle tree maker's assistant with a background in veterinary medicine (ie me), it is an exercise in frustration reading what is said about fitting a western saddle.  Sometimes what is said is just plain wrong, stated by people who don't understand how saddles really work but who present their unsubstantiated statements with confidence and authority.  Sometimes it is wrong because people are following a set of "rules" and applying them without thinking through what they are doing, and without understanding how saddles really work.  And very commonly it is wrong because "the rules" of fitting an English saddle are transferred onto Western saddles without understanding the differences in design of a western saddle versus an English one, and without understanding that these differences mean the whole way of looking at how the saddle functions has to be different as well.

Disclaimer off the top

I am making no statement that I am in anyway an "expert" or even highly knowledgeable about English saddles.  Most of my information comes from reading, watching, and talking with others who are supposed to know more than I do.  So for those who are reading this who do know a lot more about English saddles that I do, if I make a glaring error or am totally misunderstanding something, please let me know.  My primary goal in discussing this here is to present what is true/actual fact about Western saddles.  I feel that I do know what I am talking about in regards to them!  But again, if you disagree, please feel free to comment.

The English saddle, as I understand it, was designed as something to help the person be more comfortable and secure as they rode a horse primarily for transportation from one place to another.  This style of saddle also was used in varying forms as a war saddle.  Currently, it is primarily used when the rider is "going to ride", specifically to spend time with their horse or do certain athletic events with their horse.  Thus the rider's attention is primarily on their horse and their riding when using an English saddle today.

A Western saddle, however, was designed to be a tool in day to day work with cattle.  It was intended to be used for long hours at a stretch, riding over rough country, with a horn specifically made for roping and holding large cattle.  When using a Western saddle this way, the rider's attention is often looking for cattle, or on what needs to be done to move them or doctor them or brand them, or on the fence he is checking for damage, or on any of a number of other jobs that need to be done horseback.  While western saddles are now commonly used for certain athletic events (most of which come out of this background as a working saddle), many of these events still have cattle involved, so the rider's attention is still not principally on his horse at all times.  The proportion of riders using western saddles today whose concentration is primarily on their horse and their riding is growing, but that wasn't the original reason for the saddle's design.

Comparing the horse side

While the purpose of all saddle trees is to distribute the weight of the rider over as large a surface area as possible, the manner in which this is done is different between English and Western trees.  Here are a couple pictures of English saddle trees that I snaffled off the net.  As you can see, the tree is very small with minimal surface area.  That is because what is in contact with the horse are panels filled with softer materials such as wool (traditionally) or very commonly these days, foam or even air.  The shape of the tree still has to fit the shape of the horse, especially at the pommel and the points, though the rails should also be flat to the horse without edges angled so they could dig in.  But the shape and design of the panels and how they are flocked is crucial to the fit for the horse, and these saddles are usually designed to be reflocked to change the shape of the "stuffing" in the panels to match the shape of a particular horse. 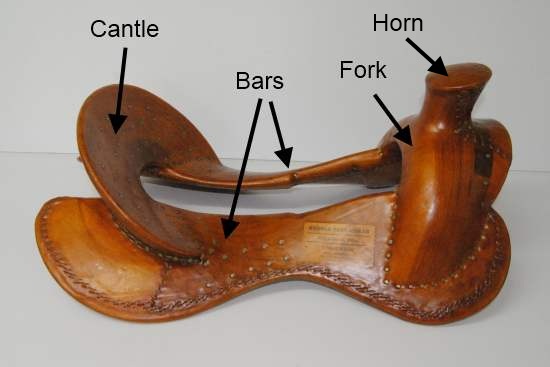 Comparing the rider side

As far as the rider goes, the shape of the cantle and the rails in an English tree is critical to how the seat is built.  The shape of the seat is made by webbing suspended from the cantle to the pommel, which is then covered with more, but thin, layers by the saddle maker.  The angle of the rails and width between them makes a large difference in how the seat feels to the rider because there is not a lot of material between the rider and the tree.  So from what I know at this point, what the rider feels is closely linked to the starting shape of the tree.

On the other hand, the seat on a western saddle is built on top of the tree by the saddle maker.  On a good saddle, they will add multiple layers of leather, sometimes including a tin layer, and then shape those layers to fit the rider.  So what the rider feels is totally dependant on how the saddle maker builds his ground seat.  The amount of rise built into the seat, how flat or curved it is, where the low spot where the rider's pin/seat bones will end up (because gravity still works), how wide it feels to the rider - all this is completely independent of the tree.  Now, a well made tree will make it easier for the saddle maker to put in a good seat, but a good saddle maker can still put a good seat in a poorly shaped tree.  It just takes more time and effort, and they could put in a better seat a well shaped tree.  (Note:  pictures here with kind permission from saddle maker Steve Mason which he posted on his blog.  More pictures of how another maker, Steve Brewer, puts in his ground seat can be found by clicking here.)

Comparing with our 3 Principles

Position of the saddle

Western saddle trees have large, rounded front bar pads with a rounded tip built in that directs the shoulder blade underneath that tip when it moves back the farthest.  It is able to do this because there is no weight on the leg at that phase of the stride.  (See Rethinking Saddle Fit and Shoulder Blade Movement for pressure testing which proves this to be true.)  So the front of the bars of a Western saddle tree are designed to sit right behind the shoulder blade.  This is explained further in our Proper Position of a Western Saddle page.

No Poking - ie. no areas of high pressure

The principle is the same, but the areas of concern are different between English and Western saddles.  The points on an English saddle are a crucial area to check as they carry a lot of the weight and end abruptly.  If the angle of the points is too steep, those points will drive into a horse pretty hard.  Also, the area of the "twist" or waist is often very narrow in order to make a narrow seat that the rider likes.  However, since pressure concentrates on bone, having those rails too close together can put a lot of pressure on the sides of the spinous processes and cause problems.  The stirrup bars are another area that can cause problems.  In order for them not to dig into the rider, they are sometimes inadvertently positioned in a way that digs into the horse.  These are critical areas to check on an English saddle.

The critical areas for a Western saddle are different.  The front and back bar tips are important as they can cause high pressure areas if they are not shaped well to match the horse.  The edges - top and bottom - of the bars may also cause pressure points.  The bottom edges will carry a lot of weight if the tree is too narrow for the horse.  The top edge, especially the top of the front of the bar under the fork, will carry too much weight if the tree is too wide and therefore "falls down" on the front end.  Another thing to check is that the crown is not too round, as it may cause a high pressure area under the center of the front bar pad.

Distribute the Pressure over as much surface area as possible.

Next up - the English saddle fit "rules" and how they relate to Western saddles.

There is so much misinformation out there. Some of it is being spread by laypersons who have interpreted something wrong--I read, once, that you should never have a saddle "reflocked" until the flocking was worn completely flat, because (ahem) "there won't be any room for them to add any" until then. Augh augh augh augh. I don't now what that article's author thought "reflocking" was, but they had the entirely wrong end of the stick. Possibly the wrong tree.

Some is being spread by people who are underinformed or who learned a little and don't quite understand it. I explained to someone once that I disliked a particular brand of saddle because it had poor quality control, and she triumphantly brought me one because it was the only thing that didn't "sink" onto her horse's withers, so it must be a well-made saddle.

Sometimes it's just something that was poorly written by someone who does know what they're talking about, but doesn't know how to communicate it well.

Sometimes it's somebody who is determinedly fanatic; you ran into that with the controversial article (if I say the name, this article will show up on search engine results too!)

In any case, judging Western tree fit by what's said on the Internet about English saddles just doesn't make any sense. They're so tremendously different. And yet, the basic idea is the same: the internal structure should be approximately the same as the horse's back, and there shouldn't be any specific areas where the pressure is much higher due to poor structural match or to saddle flaws.