Posted by RodandDenise on September 29, 2012 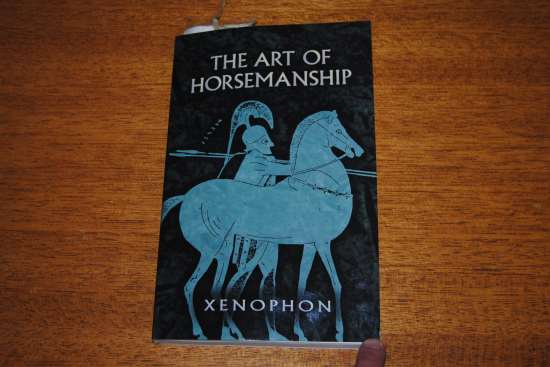 Well, I finally received a couple books I had ordered a while ago.  I have heard of Xenophon, a Greek writer who lived from 430 to 354 BC or so, for a long time.  He wrote about a lot of things, but one was a treatise on "The Art of Horsemanship".  Since it has been quoted for 2300 years or so, I figured I should probably read it sometime, and now is the time.  I especially wanted to see what he had to say about "double backs" and "single backs", having been introduced to that terminology by Dennis Lane, who uses it with his Horse Back Measuring System where he has S (single back) and D (double back) card shapes for all three transverse positions. 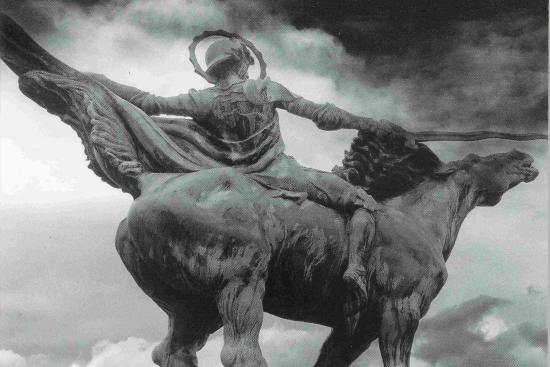 Fortunately, the translator of this work (Morris H. Morgan, in 1893 - yes, 119 years ago!) who has extensive explanatory notes throughout the book, has one here.  "The idea is that in well-built horses, in good condition, the flesh rises on each side of the spine so that the latter does not stick up like a ridge but lies in a slight depression.  This quality was of course even more highly appreciated before the days of saddles than it is now.  It is mentioned also by Vergil, Columella, Oppian and Apsyrtus."  (pg. 125)  The latter are, I presume, commonly known names, at least to those who know ancient literature, since he says nothing more about them... 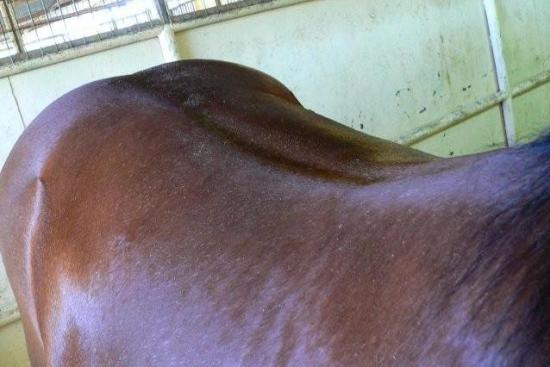 Quarter horses, by their breeding, are a muscular type of horse, so most of what we who live in the land of quarter horses see are of the "double backed" variety.  This is an excellent example with the depression of the spine clearly seen between the muscles rising on both sides.  This is a well conditioned horse in show shape. 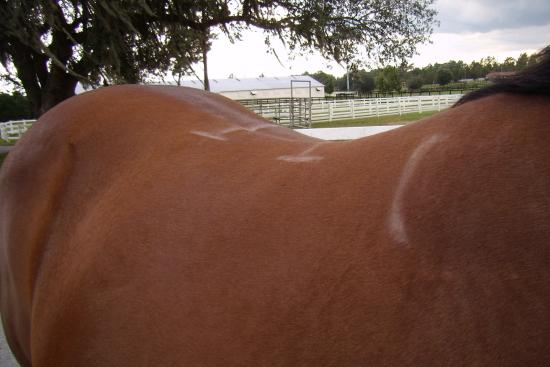 Here's another example.  This is also a quarter horse, but she is an out of condition, fat one.  Is the "double back" muscle or fat?  Probably some of both.  But when it comes to saddles, we are still trying to fit the shape, and that's the shape she is - and in this case, the shape she will be.  (You want to fit the "working shape" of the animal, not their fat, out of shape profile.  However, for some horses their "fat, out of shape profile" is their working shape, as they don't and won't work much.  In that case, you fit them as you see them...)

But it sure isn't just Quarter Horses that have "double backs", as shown by the Icelandic horse and Spanish Mustang above.  Shape doesn't necessarily go along with breed, which is why we don't build trees based on just the breed of the horse.  Sure, there are tendencies in some breeds towards certain shapes, but there is often more variation within a breed than between breeds.  Take Quarter Horses for example.  Are you talking halter show shape foundation bred QHs or in training running QHs?  Now that may be an extreme, but it just shows the amount of variation there can be within a breed. 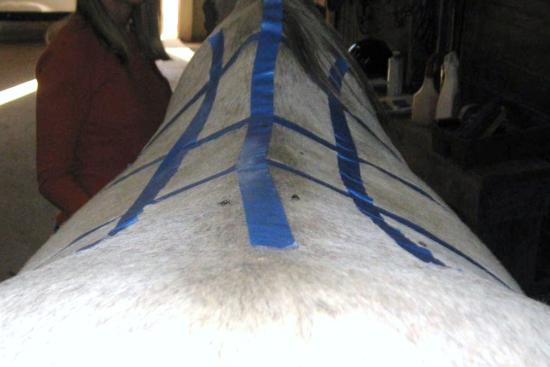 On the other hand, a "single back" has the spine as the highest point with the muscle angling down from it.  In other words, more A shaped.  This horse, which happens to be an Andalusian, shows a pretty definitive example of a "single backed" horse. 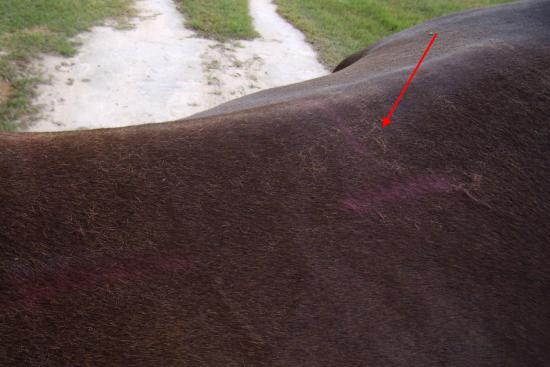 But within the broad category of "single back", there are still quite a variety of shapes.  The Thoroughbred pictured here is probably the horse with the narrowest "angle" to his back I have ever seen.  He was narrower than the smallest of the Dennis Lane sizes in his mid back and beyond.  It's hard to see in the picture how concave his muscle was, but look at how the chalk line on his back dips in.  And just to prove that size of horse and width/angle of back don't correlate - he was over 18 hands tall!  (He had been injured and since then was primarily standing in a stall.  Not much muscle on him when I saw him.) 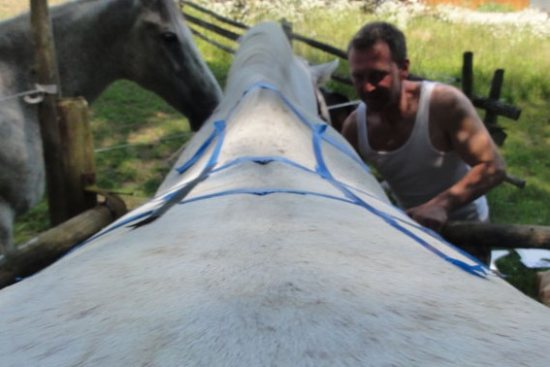 This grey (a Warmblood x Lippizan) is a different horse on a different continent  than the one pictured above.  She is more A shaped in the middle, but is getting less so farther back.  Note on this horse that there is a very small dip right in the center of the back into the center of the spinous processes.  It is probably ligaments and how they attach that make that dip.  But the muscle beside the spine still angles down and away from the spine rather than curving up and around, so this would be classified as a "single backed" horse.

But it isn't just "European  type" horses that have this conformation.  Here are pictures of a mule and a Missouri Fox Trotter that are both "single backed".  (I don't know what it is about grey horses and blue tape...)

And in case anyone is thinking Quarter Horses can't be this shape, here are a couple that are definitely "single backed".  (OK, so it isn't just grey horses that have blue tape on them...) 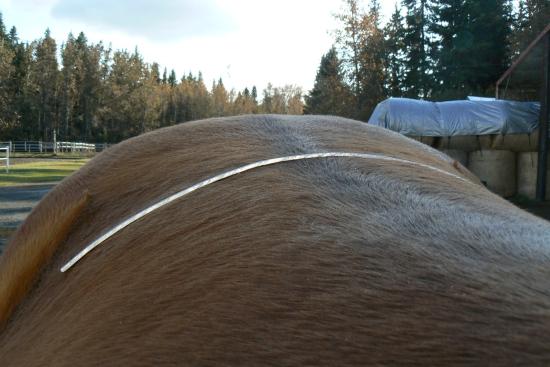 Then again, we see a lot of horses like this - no dip and no peak.  Just round all the way across.  So what would you call him?

So this is a sticking point I have had with this terminology.  (What???  Am I questioning the great Xenophon?  Not to mention Vergil, Columella, Oppian and Apsyrtus?  Well, why not?  They don't know, and if they did I really doubt they would care what someone who lives off in boonie-toons Alberta thinks... )  But I have come to the conclusion that it really isn't a classification system used to divide horses permanently into one group or another.  It is just a description of their shape at the time.

So why does it matter to a tree maker anyway?  Well, it affects a lot of things in how we build a tree.  The "angle" of the bars needs to match the "angle" on the horse all along the back -  a steeper angle for "single backed" horses and a flatter angle for "double backed" horses.  (You remember, of course, that there is no measurement for "angle" anywhere except the front, and that you can't compare between tree makers there anyway.  The "angle" farther back is due to a combination of "angle" at the front and the amount (and place) of twist in the bar, none of which have measurements as such.)

Most people who think about saddle fit understand the "angle" idea, even if they don't think about it at the back of the bars.  But something people tend not to think about much is the crown - the amount of curve side to side on the bar - which also changes throughout the length of the bar.  The amount of crown compared to the shape of the horse makes a big difference in the surface area actually contacting the horse, which affects how solidly the tree will sit on the horse's back, even if the front "angle" is correct.  And crown also affects the edge relief built into the bar which is important in avoiding high pressure points. 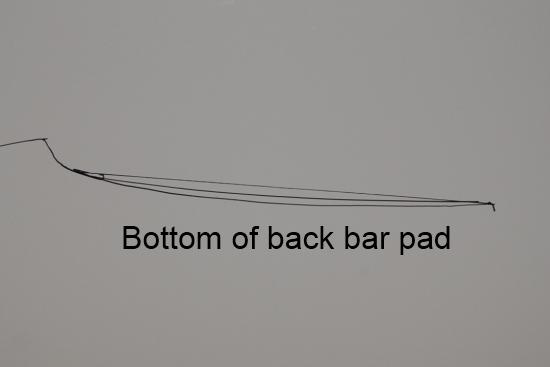 Here are three crown profiles we use on the back bar pad for illustration's sake.  The roundest crown pattern is the original one Rod started with.  It was designed for fitting Western Canadian (and Northern US) ranch horses in good condition in the 80's and early 90's.  These horses had more of a TB influence than they do now, when a 3 3/4" hand hole width with 90 degree bars was the standard fit.  Many of these horses would have leaned heavily toward the "single backed" shape, and we use this crown pattern now only when we know we are building for "single backed" body types.  When weighted, all bars will press into the muscle.  With this much crown, it will still contact the center if the muscle is concave, and it will have a more even pressure without the edges digging in on flat muscled but A shaped horses.  But on "double backed" horses, only the center will contact well.  Both the inside and outside edges will lift off, leaving less surface area on the horse than is ideal.  (I have heard the illustration of tennis balls balancing on each other to describe this, but that is pretty exaggerated, although it does demonstrate the idea.) 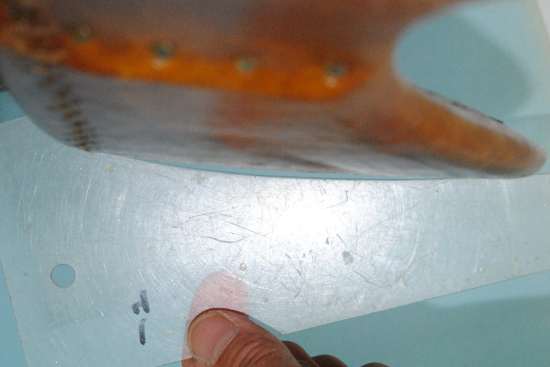 The middle profile is the one Rod uses the most now.  You can see the difference here between the most convex pattern and the middle one.  There is still enough thickness to round the edges enough that they won't create pressure points on those in between and less bulgy "double backed" horses, but it allows for more even contact side to side than the more convex one. 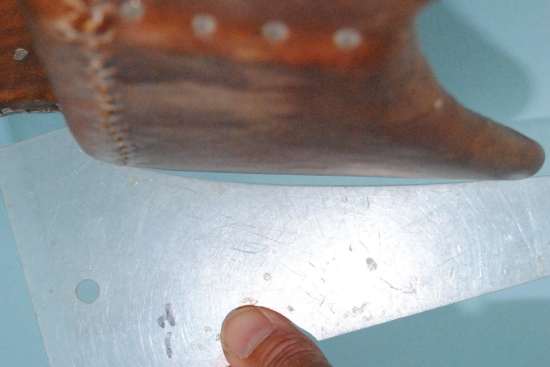 The last pattern is dead flat in the middle, like the tree in this picture.  You can see the amount of difference it has from the most convex pattern.  While it may not appear to be a big difference in the picture, you can sure see it in a real tree and when the trees are on a horse.  We use the flattest pattern for horses with the really flat angled backs and more bulgy muscles - basically the wider "double backed" type.  Because there is less thickness overall, it makes the edges thinner.  This is nice for the saddle maker as it is easier for him to block his skirts, etc.  But you have to be a lot more careful with angles when you have thinner edges, because if it is too narrow an angle on a horse, that thin edge can easily make a very high pressure point.

So while Xenophon wasn't worried about saddle fit (saddles hadn't been invented yet) he was looking at how horses are built and what is the best way to help the rider and horse work well together.  And we are still doing the same thing today.  "The more things change..."