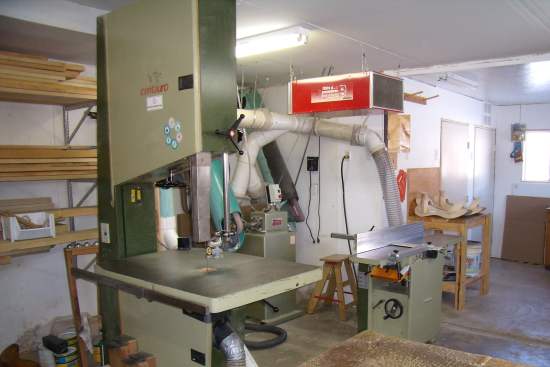 This time I thought I would highlight the central feature of our shop - the BIG BAND SAW that dominates everything else.  When people ask us about learning to build trees, one of the first things we say is that it isn't something you can do in your basement in the winter.  This band saw is the biggest reason why.  It is over eight feet tall, and when we built the shop, it was either modify the rafters to accommodate the band saw or build a ten foot ceiling.  Economically, we chose to modify the height of the ceiling in that spot. 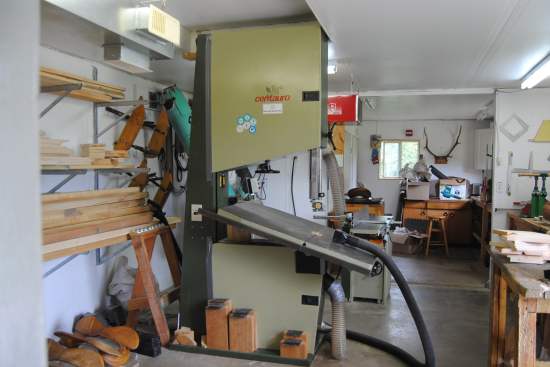 Ours is a 800mm (31 1/2") Centauro brand band saw.  (Centauro is an Italian company which has been building good quality band saws for many decades.)  Why so large?  Well, it doesn't have to be quite as large as this.  As you can imagine, you don't pick up one of these at your local garage sale very often...  This was a slightly used model that was available in a neighbouring province for a (relatively) good price when Rod was setting up the shop and it has worked really well for us for the past 16 plus years.  A lot of tree makers have 30" or even 28" band saws.  We know of a couple with smaller ones that they get along with, though they say that at least a 28" would be preferable. 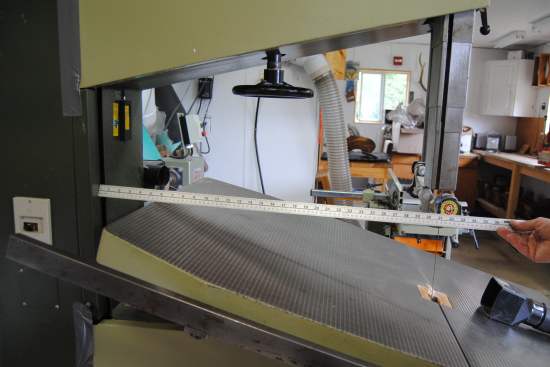 The 31 1/2" is the depth of the throat - the room we have between the blade and the back of the saw. 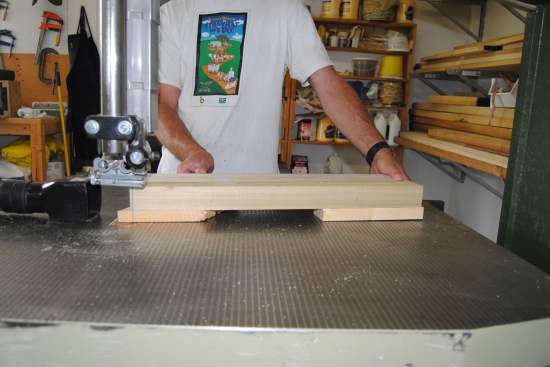 When we cut out bars, we need enough room for a full bar in there.  Since our bars are all less than 25", this gives us lots of room.  When cutting boards into pieces, it is handy to have this room to cut the boards into more manageable sections rather than cutting small pieces off the end of a long board.  Depending where the cuts need to be made and how long the board is, this much room can come in very, very handy. 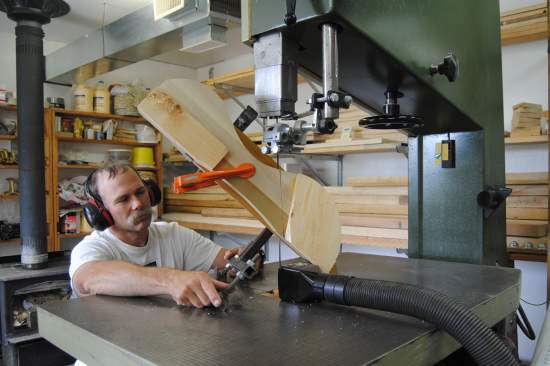 The other need is height.  When making those all important cuts on the bar for the fork and cantle to fit into, the jig holds the bars off the table a ways.  The larger the band saw, the more room you have vertically to make those cuts.  (Note, the rectangular metal guards around the blade are moved up and down depending on how much blade needs to be exposed for the height of cut needed.  A very appreciated safety factor!) 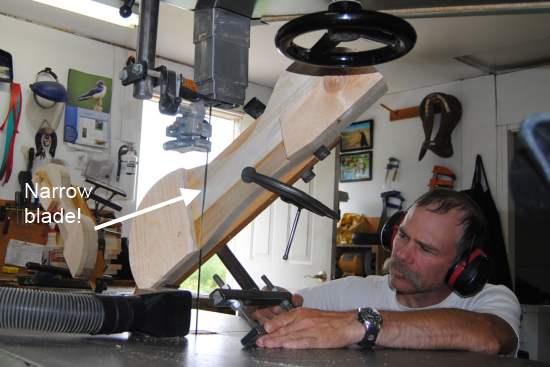 These saws are really designed to cut large trees into lumber, and therefore they usually have large, thick blades.  However, to make the tight cuts we do, especially inside the fork and cantle gullets, a smaller blade is needed.  So rather than a 2" wide blade, we use a 1/4" blade.  We get furniture blades, which are 0.032" thick - thicker than the normal 1/4" band saw blade.  Being this narrow and having the extra tension on it because of the size of the band saw means that the welds on the blades we buy have to be very well done or the blades will break at the welds fairly quickly. 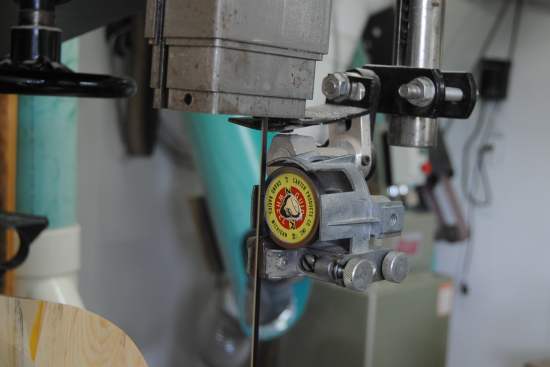 Because we have a narrow blade, there can be more deflection than with a wider blade when cutting with height.  Fairly early on, Rod was told about these guides made by Carter Products.  (They make them specifically to fit a lot of different types of band saws.)  There is one above the table and one below the table.  They hold the blade much more accurately and were definitely worth the money.  (Google-eye ape was a Rod retrofit.  He has probably made hundreds of thousands of revolutions over the years...) 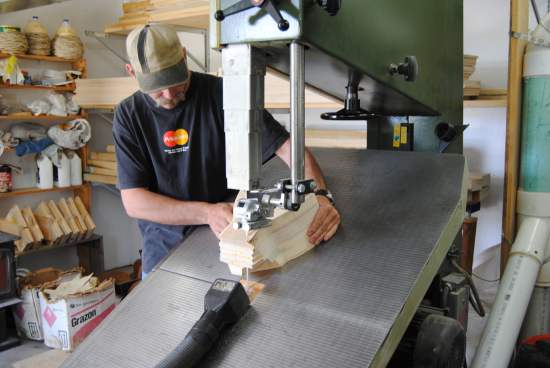 We do a lot of our angle cuts by tilting the table, and getting those angles accurate is really important. 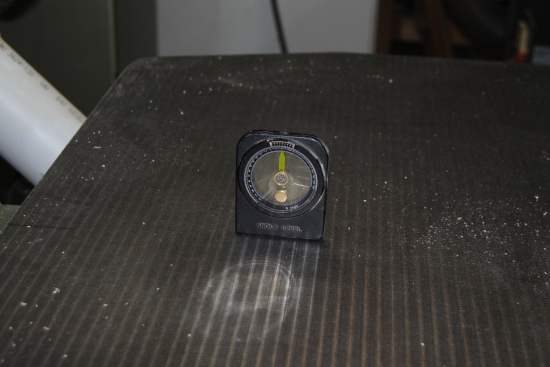 Originally, Rod set the table angle by using this Acu-Angle level from Lee Valley.  Very accurate, but you had to set the level, move the table, get close enough to see the little lines, change the table, check it out again, move it back a tiche, check it out again and repeat till the lines lined up.  It worked, but took time.  So we decided to use a better way. 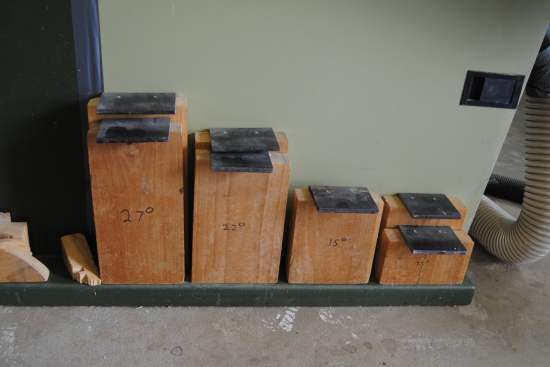 We made up a series of blocks of different heights and put heavy metal bar on the top of each of them.  We carefully adjusted the height of the block till it held the table at the prescribed angle. 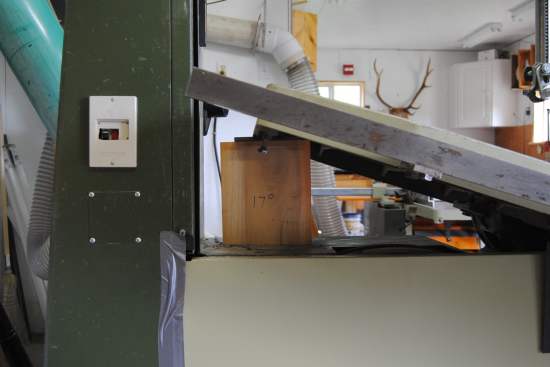 So now Rod lifts the table up, puts the block carefully in the correct place and puts the table down on the block.  Consistent, exact angles every time!  And much faster than the old method. 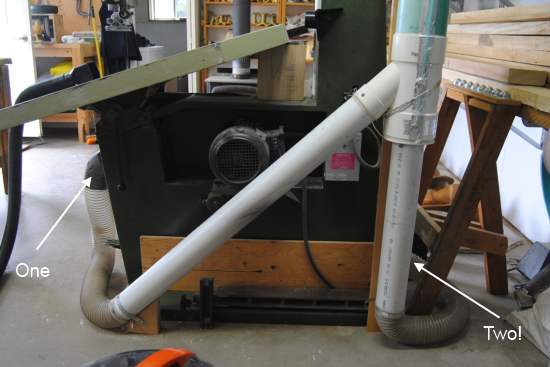 When we started out building trees, we were told "It is the dust that kills tree makers."   Though we tried from the start, it took us a few years to figure out how to get the dust under control, but we have a good system now.  Since the saw is so large, there are two, 4" dust collection ports that combine and flow into the 6" ducting of our dust collection system.  Since the blade takes the majority of the sawdust down into the bottom compartment, these two ports take care of most of the dust. 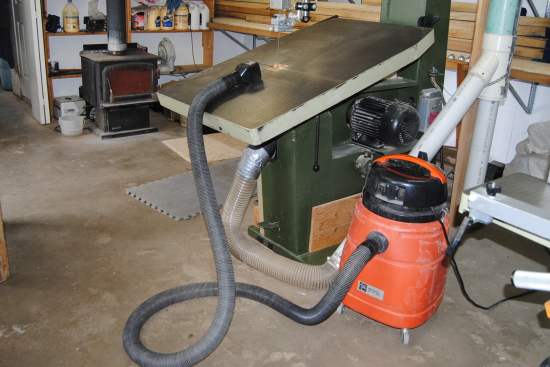 But some doesn't get pulled down the small hole in the table and that is collected, when possible, by the shop vac connected to a magnetic dust chute (from Lee Valley again, where else?) that can be moved to wherever it will be most effective. 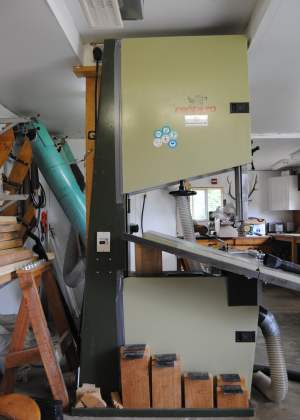 We know that people were making saddle trees before there were band saws, before there was power, before life got "easy" for tree makers.  But it sure would be a whole lot harder to build them without this monster sitting in the middle of the shop!!