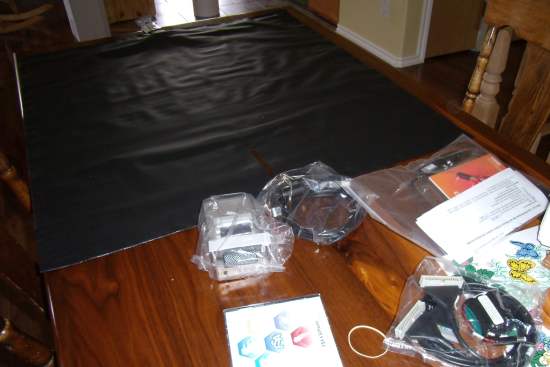 Well, after years (literally) of researching, wishing, thinking and saving, a fantastic chance came to get our own pressure sensor mat to be able to gain some solid data about how saddles and trees really work on horse's backs.  This way we will KNOW, not just think we know, what is really going on there.  So we made the leap and bought our birthday, anniversary and Christmas presents for each other for the next ten years or so all at one time.

We purchased the FSA (force sensing array) mat from Vista Medical in Winnipeg Manitoba.  This is the company that built the first mats used by researchers in the earliest scientific papers (around 1994) and these mats have been used in a number of articles since.  Of course the technology has advanced a lot in the meantime and a number of papers use other types of these mats but looking at everything combined, this one was our choice.

Why we chose this one 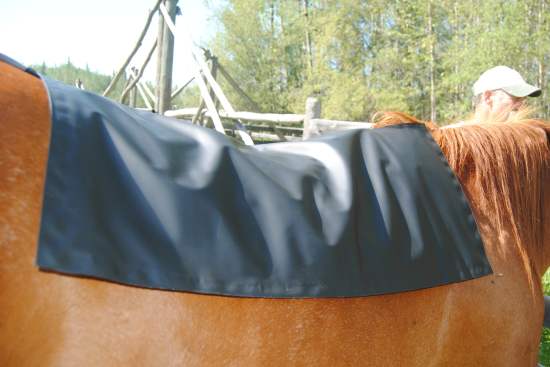 The biggest reason this was the first choice of mat for us was that it is large enough for a western saddle.  Most of the others are basically geared for English saddles which are much shorter, so many of them wouldn't even read a whole western tree, let alone the whole saddle.

This system goes all the way across the horse, including the midline.  That may seem like a given, but one of the most common research models is two pads that are connected together with Velcro so there are no sensors over the midline.  When I talked with the company rep about this, the answer given was "there isn't supposed to be pressure there".  Right, there isn't SUPPOSED to be pressure there, but how do you know unless you test it?  You can have pressure on the spinous processes at the gullet (which you can see), but also anywhere under the groundseat or under the cantle where you can't see.  We also know that  the lacing at the back of the skirts as it crosses the midline can cause a high pressure point which should be easy enough to see, but is often missed.  So it is important to KNOW if there is pressure there or not (especially under the saddle), and the only way to know is to have sensors there.

The FSA mat also coordinates with video, so you can watch what the horse and rider are doing and connect their movements with the changes in pressure that you see on the screen.  The video is what really takes up computer space so we will only be using that feature when we are doing studies that involve movement.  However, for that situation the video is really needed.  For some of the other systems it is an expensive add on.  It is standard with this one. 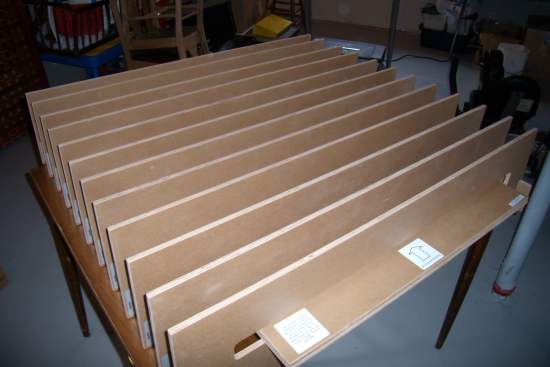 It also comes with a calibration jig we can use as needed to check and reset the calibration on the sensors.  All these types of pads need calibration at different times and some you have to send back to the manufacturer to get them recalibrated.  This technology allows us to do it on site, saving a lot of time and cost in shipping.  However, unless we are involved in actual research studies (which is another hope and dream) we don't expect to need to calibrate the mat very often.

And yes, it was more affordable than the others too... 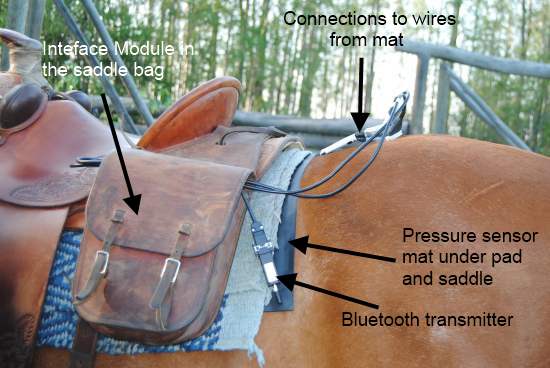 The way it works is by having electronic sensors built into a very thin, flexible mat placed directly on a horse's back.  The mat has wires that come out the center at the back with connectors to wiring that attaches to the Interface Module, or IM.  Older models (and some of the other systems available) had to be wired directly to a computer, but ours has a bluetooth wireless system so the horse can be a distance from the computer and we can still get the data.  We aren't sure quite how far it will read, but our arena is 200 feet long and it reads at least that far.

The mat is placed onto the horse and then whatever you are testing - saddle or tree, with or without weight, with or without padding - is placed on top.  The system works by reading the normal force on each individual sensor at X number of times per second.  We can vary the scanning rate depending on how much data we think will be usable.  The system can scan up to 10,000 sensors per second, so for our mat which has 432 sensors, that is over 23 Hz (reads the entire mat 23 times per second).  While this might be fun to watch on the screen, it isn't something you want to record on the computer due to the size of the files, and a much lower scanning rate still gives very useable data.

We can also easily change the units the pressure reading displays (PSI, mmHG, kPa, N/cm2, and a couple more) as well as the level of pressure read before the sensors max out.  The the software computes all sorts of stats which can be exported to Excel so we can crunch the numbers for academic studies if needed.

There are a couple issues with our mat that need to be resolved, and then the long, steep learning curve on how to accurately use the mat and interpret what we are seeing will begin in earnest.  We have done a few initial scans - enough to start learning about what we need to do to use the mat accurately and effectively.  But after we get a good handle on using this piece of equipment, we are really looking forward to what we will discover with it.  We and expect that there won't be too many surprises, but that is what we want to find out.  If we get surprised, then we will have learned something new.  If we confirm what we already thought, then we will KNOW, not just think we know.  We will also be able to back up our opinions with provable facts and hopefully refute some of the misinformation that abounds about saddles, trees, and how they work on horses.