Home > Saddle Tree Blog - From Shop and Desk > Can the loin of the horse carry weight?

Can the loin of the horse carry weight?

If you read or watch anything about saddle fit on the internet, you will come across the "fact" that saddles have to stop at the last rib or T18 or somewhere in that vicinity because, according to the "rules", the lumbar area (particularly the junction between T18 and L1 - the thoracolumbar junction) is "the weakest area of the back" and you will definitely harm your horse if there is any weight on it.  But the tree of almost every Western saddle out there extends onto the loin of the horse.  So what is the truth?

I posed the question about the strength of the back to Dr. Kevin Haussler, a well respected veterinary researcher at a large vet college in the US whose specialty is the equine back.  His response was that there are not any studies that test the strength of a horse's back in different spots (or even the strength of their legs for that matter) because "we can't have them lift weights, for example".  So there is no way to test which part of the back could be stronger or weaker.  This means that all statements about strong and weak points of the equine back are based on conjecture only.

It is tempting to look at anatomy and "figure out" function based on it.  When eventually someone determines a good protocol or the technology evolves to the point where the theories can actually be tested, it is discovered that sometimes the assumptions are correct, sometimes they are off, and sometimes they are way off.  Since the ideas about the strength of the back are just theories, where might they have come from? 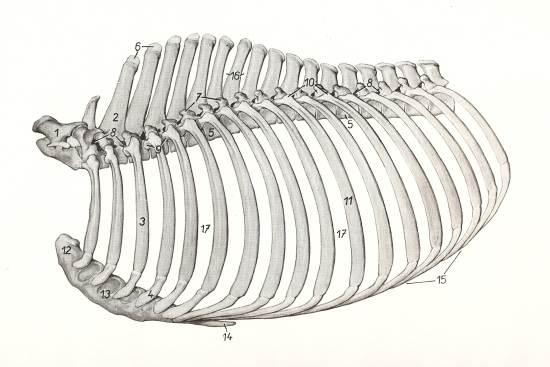 A big part of the idea is that the ribs stabilize the spine and since the lumbar area has no ribs, it can't be as strong as the thoracic spine.  What has been documented is that the first eight thoracic vertebrae move less relative to their neighbours compared to T9 to T18.  This is because the first eight ribs connect directly not only to the spine at the top but also to the sternum (breastbone) at the bottom.  The bottom of the last ten ribs connect to each other and eventually to the sternum via lengths of cartilage (#15 in the picture), so they are more mobile than the first nine.  But since the scapula overlies the first 8 to 9 vertebrae and the tree sits behind the scapula, the weight of the saddle is carried on the more mobile ribs anyway. 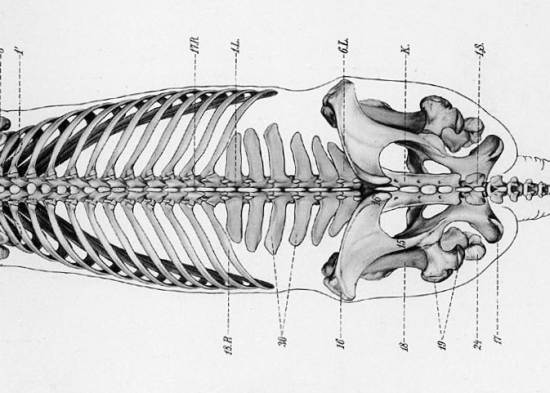 When you look at the spine from the top, it is clear that the ribs angle backwards and thus would support weight beside the first couple of lumbar vertebrae.  It is also clear that the transverse processes of the lumbar vertebrae have a lot of surface area for support for the lumbar muscles. I heard a lecturer in an equine conference state that if you put weight on the loin, you ran the risk of knocking the vertebrae out of alignment because of the transverse processes having leverage on the vertebrae.  Since Dr. Haussler was one of the initial vets introducing equine chiropractics into the mainline veterinary community, he was a good one to ask about this.  His response was clear and blunt:  "If you are putting enough pressure on the lumbar vertebrae to "put it out of place", which is very poor terminology and does not ever occur, then you have no business riding a horse."  So there goes that argument....

The next thing I look at is the size of the muscles that support the saddle.  The biggest one that we are concerned about is the longissimus dorsi, which is the major muscle that runs along each side of the spine from the thorax to the pelvis.  When you look at the size of this muscle, it gets a lot larger in the lumbar area compared to the thorax.  It is difficult to compare total size in these pictures because they are not to the same scale.  (Check the size of the body of the vertebra to see that the one at T14 is much larger than the one at L3.  In real life, they are close to the same size.)

But here are some pictures of the dissection we did of the pony sized mule.  You can see the relatively small size of the cross section of the longissimus dorsi over the thorax compared to how wide and broad it gets over the loin.

When you look at a cow, you can see the transverse processes sticking out, especially on dairy cows or thinner beef cows.  You can't see that on a horse until they are in very, very poor condition, as this poor fellow is.  That says something about the muscle mass over the lumbar vertebrae on a horse.  (These are both pictures I pulled off the net so I can't tell you anything more about the poor starved horse than that he was being cared for when this picture was taken.)  But the other thing to notice is how short the distance is between the ribs and the point of the pelvis on the horse compared to the cow.  Shorter spans are stronger.  So when I hear people say that "horses were never meant to be ridden", I disagree.  It sure looks to me like God designed them to ride!

So can the horse bear weight past T18?

The response of Dr. Haussler to that question was also pretty plain:  "The ribs and overlying epaxial muscles support the saddle in the thoracic region and the lumbar transverse processes and the overlying middle gluteal muscle support the saddle in the lumbar region. If horses were really this “weak” at the thoracolumbar junction then no one would be able to ever ride a horse." 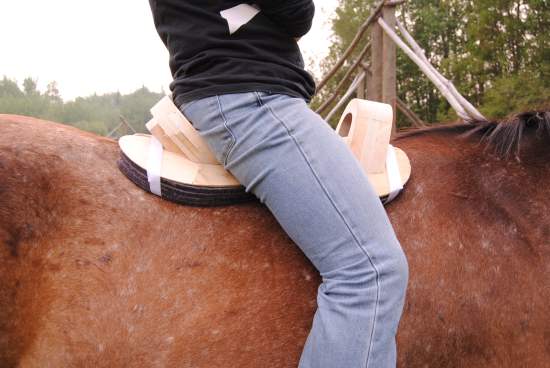 Look at the tree sitting on the horse.  It is clear that although the back of the bar extends onto the loin of the horse, the rider is seated over the thorax.  On our trees, there is 6" of bar behind the cantle cut, and when you have the groundseat installed into the tree, the rider is a ways ahead of that.  So the rider is much farther ahead of the back of a western saddle than an English saddle (which is where a lot of these "rules" originate).  This doesn't mean there is no pressure on the loin.  Any saddle behind the rider still carries pressure.  The whole idea behind having larger bars is to have the pressure distributed over the larger surface area rather than a higher PSI over a smaller surface area.  But when we measured surface area on our "average" bar length, we figure that between 10 to maybe 20 percent of the surface area of the bar is on the horse's loin, depending on the size of the horse.  So while there is weight on the loin, it is not a large amount.

While the horse can carry weight on his loin, what he can't tolerate without long term problems is high pressure points digging into him.  So it is vital that the back bar tip doesn't Poke into the horse, and this means that the rock in the bar and the relief at the back bar tip must be correct.  You can cause a lot of pain and problems for a horse by having the bars dig into the loin, but that is a different senario than just carrying some weight.

So the next time you see a concocted picture on the net (or in a book) that shrinks a western tree so small that it fits between the shoulder blade and T18, think about how small a person would have to be to fit into that photoshopped saddle.  Then join Archibald the Asparagus in saying "STOP BEING SO SILLY!!"

Now that we have established that the saddle can actually put weight on the loin of the horse without damaging him, we can go ahead and look at the movement of the lumbar vertebrae, since they really are functional underneath a saddle.

(PS.  Another post showing that all Western saddles extend onto the loin of the horse can be found by clicking here.  If weight on the loin was that detrimental to horses, the design of western saddles would have been discarded long ago rather than being the design of choice for heavy work and long hours in the saddle.)

Posted by Dena on Aug 28th, 2012
I'm studying saddle fit and found this article to be very helpful! Thank you! I am aware of many studies of English saddles using pressure sensor pads to see exactly how pressure is distributed over the horse's back during riding. Are there similar studies for Western Saddles? It seems that would answer the question of really how much pressure is placed in the lumbar region.
Posted by RodandDenise on Feb 27th, 2017
Dena,
The only actual published studies I am aware of with Western saddles are on pad types. There aren't any on the saddles themselves, probably because it is very difficult to get publishable data when you have such a variation in how saddles can be made and so many factors involved in how they fit. There also are not any studies that show that the lumbar area can't carry weight, is weaker than the other parts of the back, etc. These are unsubstantiated statements made and repeated by people who are used to English saddles. Nobody who was used to riding western saddles would make such a claim because all western saddles do extent onto the loin and horses have been ridden in them for centuries without being crippled. The percentage of weight carried there is small and, as always, you need to avoid high pressure areas (Poking).
« Previous
Next »