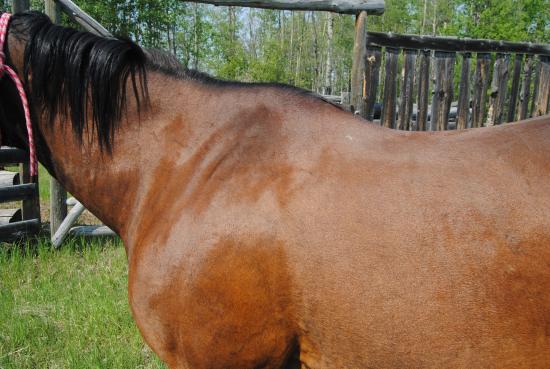 A long, long time ago now – about 3 ½ years – when I was doing an series on equine anatomy as it applies to saddles and how they work on horses, I did a post on the foreleg of the horse. I talked about the scapula (shoulder blade) and its basic anatomy. In a later post I discussed more about how the shoulder blade moved, and in a third post I described how saddles and shoulder blades work together – or not. I need to recap some key points at this time because they are needed as the basis for future posts I have planned. A very important part of those future posts is being able to find the shoulder blade not only practically on a live horse but also visually in pictures, since a lot of tree makers and saddle makers work long distance from their customers. 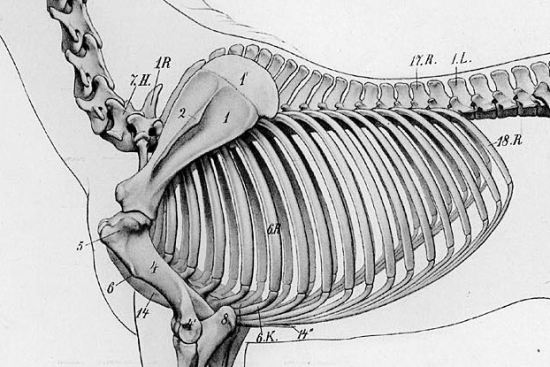 So – basic scapula anatomy. First off, the term is scapula. People sometimes call it the scapular, but that is an adjective – scapular attachments or scapular movement. (Technical details, I know, but I’m slightly neurotic that way…) It is the uppermost bone in the foreleg of any animal. In many mammals, all the domestic ones I know of, there is no bony attachment to the skeleton. Horses, dogs, cats, sheep, goats, pigs, cows, etc. do not have collarbones that connect their front leg to the rest of the body. The connection is strictly muscular. This is why cats can jump out of trees and horses can jump huge fences and not break their collar bones while kids who fall off teeter totters do. People have arms connected by bone. Horses don’t. 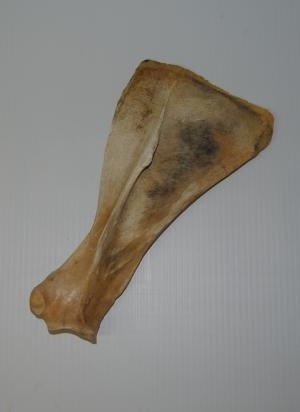 The bone itself is rather triangular, with a ridge sticking out on the side away from the body. This ridge is called the scapular spine and can be easily felt and usually seen on the horse since there is only skin and its thin layer of muscle covering it. All large muscles lie in front of or behind this ridge, and it is the attachment point for a number of important ones. 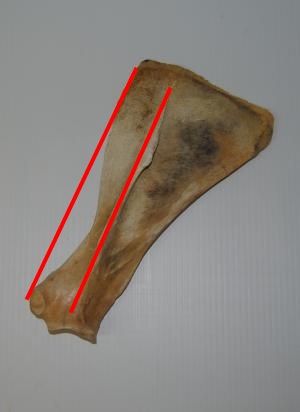 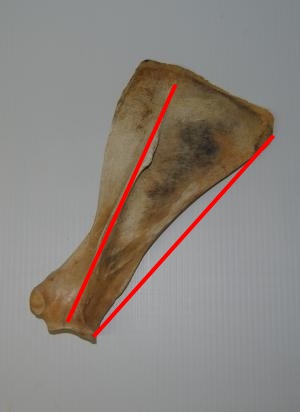 Warning – dissection picture ahead. But if you prepare any kind of meat, I’m sure you can handle it. 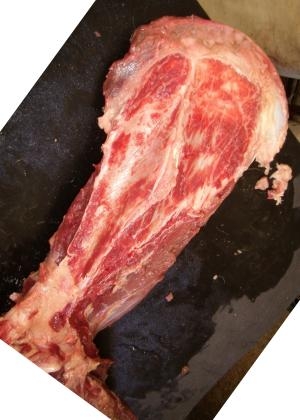 Something else that is very, very important is the part of the scapula that isn’t bone – the scapular cartilage that attaches to the top of the bone. It curves around the top of the bone from front to back, extending back beyond the bone itself. Cartilage is tough stuff, but still relatively soft and quite flexible. It is easily cut with a knife, and it doesn’t survive bone preparation, which is why you don’t see it on skeletons. 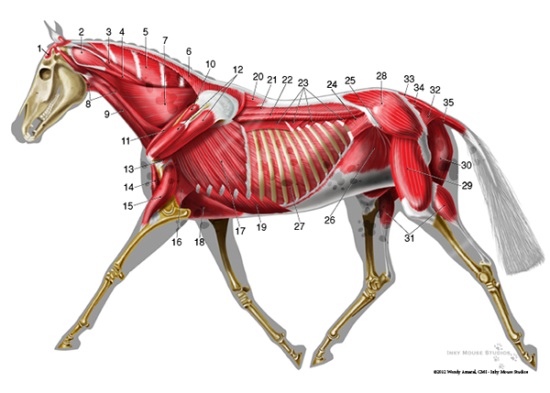 So much for the bone. But what does it look like with muscle on it? Here you go with the deep layers of muscle added. You can still see the spine of the scapula between the muscles covering the bone ahead of and behind it – plus a few more around it. 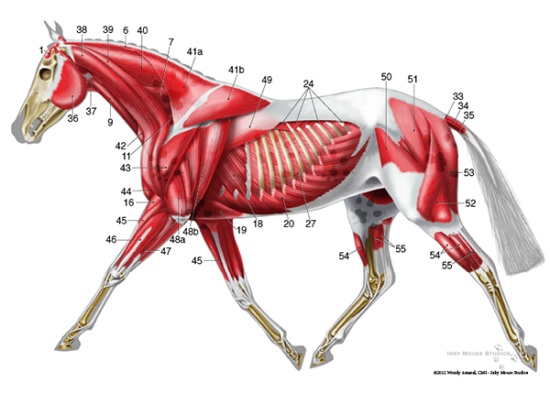 Here’s how it looks with the superficial muscles on it. You can still see spine of the scapula, but there are more muscles covering the top, front and back of it. (Both these illustrations are used with the kind permission of Wendy Amaral of Inky Mouse Studios. Thanks Wendy!) 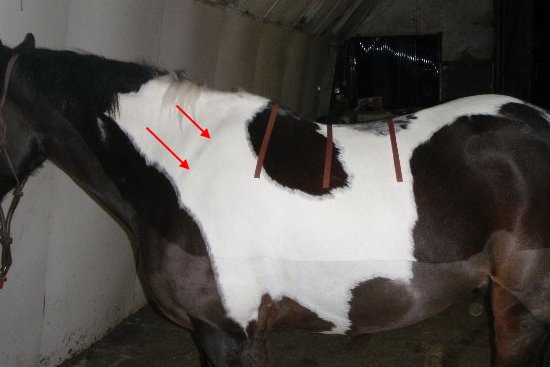 And here’s how it looks with skin on. You can still see the scapular spine and depending on how muscular the horse is, you may or may not be able to see the basic outline of the scapula. On some thinner bodied or out of condition horses, the spine of the scapula may stick out from the shoulder, as this one does. You can see the front of the scapula and you can sometimes see the back of it as well. 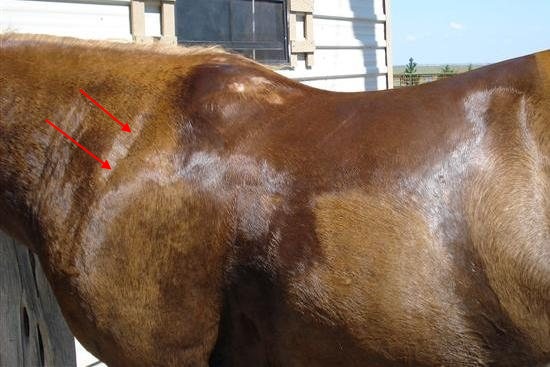 On really muscular horses, you can see the scapular spine in the dip between the muscles bulging fore and aft. You can usually see the front of the scapula to some extent or another, but generally the back of the scapula is well hidden under the trapezius muscle. 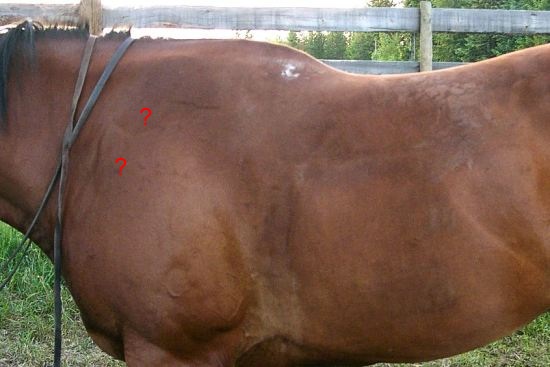 On flat shouldered horses, the scapular spine can be level with the muscle, making it hard to see. However, you can pretty much always see the front of the shoulder blade, though if you can see the back or not varies. But whether you can see it or not, you can always feel the hard bony line of the scapular spine under the skin compared to the softer muscle on either side of it. 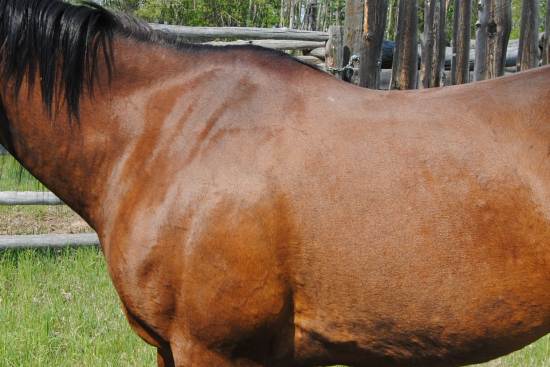 So, how do you find the back of the shoulder blade on a live horse? First, find the spine and the front of the scapula. Then, knowing the shape, you have a really good idea where the back is. If you have a horse shaped like this one, you can basically see it. 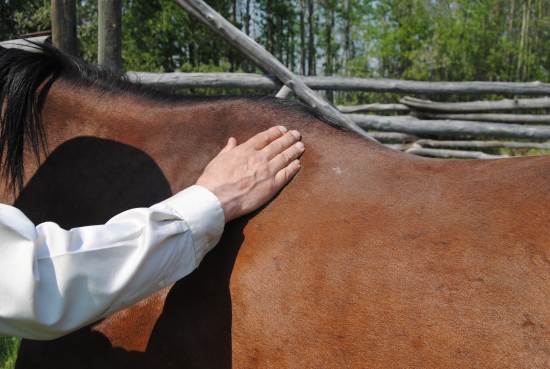 Next, run your hand back over the top of the shoulder blade with a bit of pressure on the fingers towards the hind end.  You will feel your hand come off the edge of the scapula, which is firmer, and dip down into the softer muscle that covers the body. On most horses, finding it isn’t a problem. On those really muscular horses, it can be tough. Sometimes it helps to walk them around with your hand in the right area. As you feel the shoulder blade moving around under your hand, it is easier to figure out where it ends. 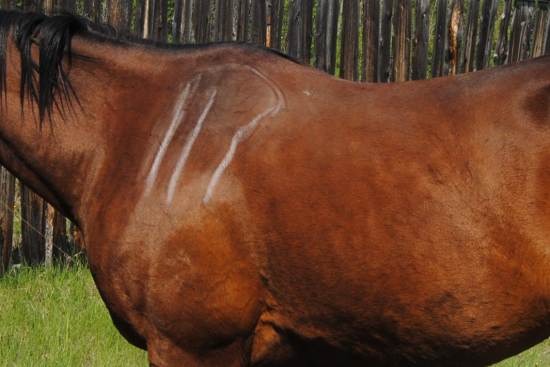 Here’s a comparison picture. I just took chalk and drew around the scapula based on what I could feel. You have to remember, though, that as the horse moves, the scapula moves under the skin. They aren’t stuck together. So the chalk doesn’t stay over the same part of the scapula all the time. 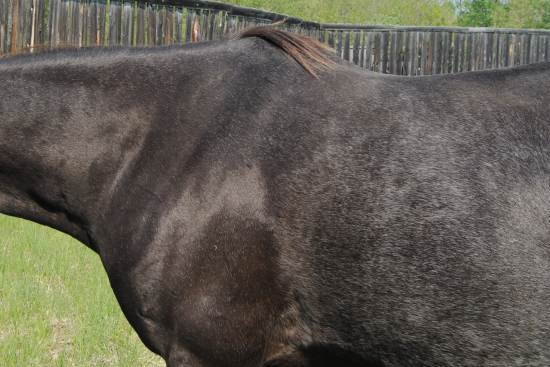 The shoulder blade harder to see on this horse due to the color, but you can still see the basic shape. 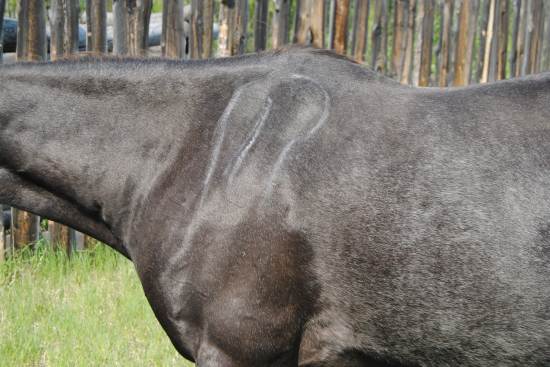 And here she is with it drawn on based on feel. 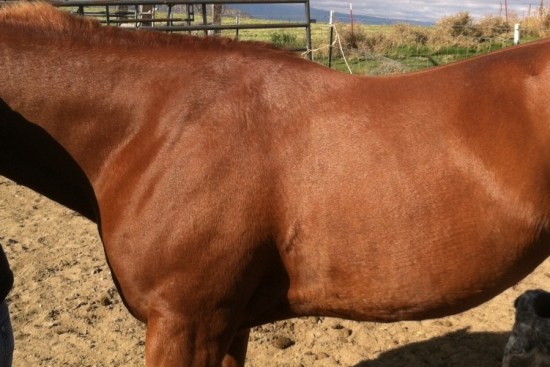 We’ll start you off simply. It is easy to see the scapular spine and front of the scapula, and the back is relatively clear as well. 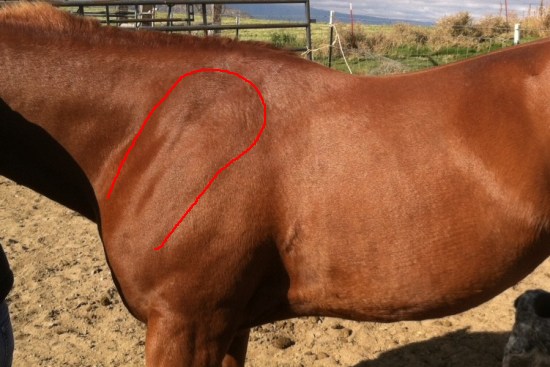 Comparison with my drawings – not too tough. 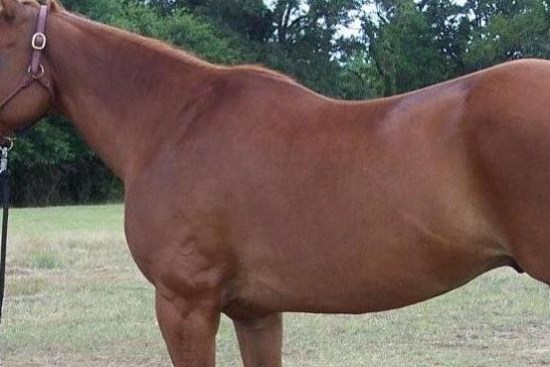 This one is a bit harder. Still easily seen front and spine of the scapula, but the back and top isn’t as obvious. 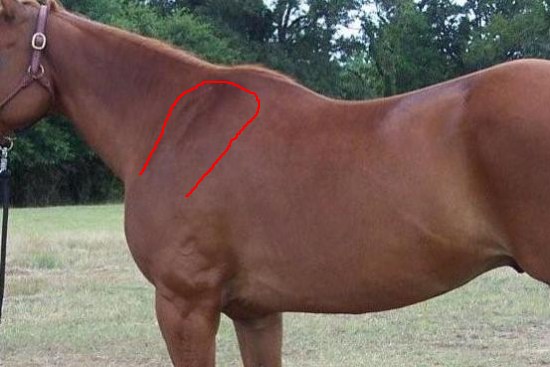 Any objections to my suggestions? (I’m a poet and I don’t know it.) 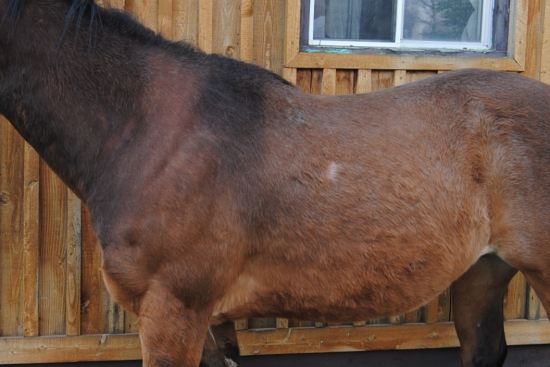 Increasing the difficulty here. Longer hair obscures things more. You can still see the scapular spine and a bit of the front of the shoulder blade, but the top and the back aren’t really visible. 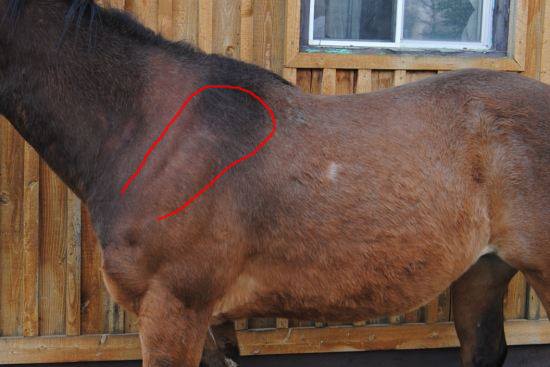 But if you know the basic anatomy, you can figure out where it should be fairly accurately. 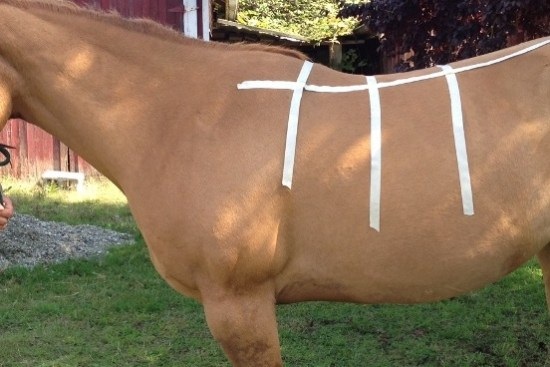 This one is tougher yet. You’ve got a hint of the scapular spine and bit of the front of it. Of course, the tape at the back kind of helps… 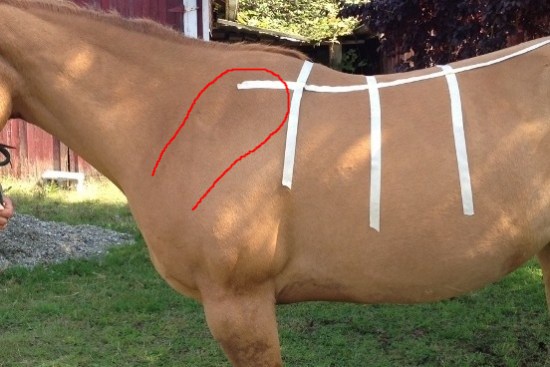 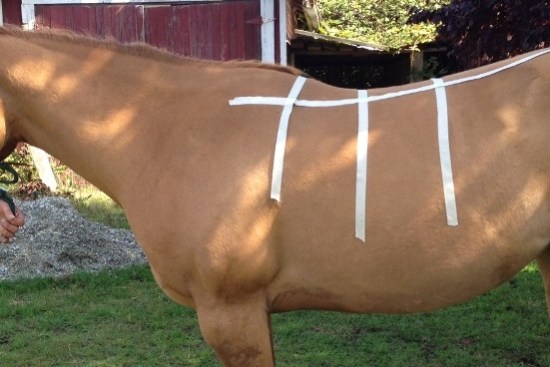 And aren’t you glad I didn’t give you this one without the shadow?? It is often harder to see in pictures, but if you can develop your X-ray eyes with pictures, then real life is easy.

Next up, seeing the shoulder blade under saddle…

Posted by Diane Kaser on May 31st, 2015
I never thought that the scapula would vary so much from horse to horse. Some are much wider.
Posted by RodandDenise on May 31st, 2015
The bottom half isn't as accurate as there is a lot more muscle covering that area. I'm really concentrating on the top third as that is what is impacted by the saddle. The ones in chalk are real, drawn on by feel. The ones in red are my best guess drawn on pictures on the computer with a non-talented hand, so they can be taken with a grain of salt, or two... But hopefully it gives people an idea of where to look for it.
Posted by Eleanor Eagly on Aug 20th, 2016
how about the position of the scapula as it moves when leg is extended or am I getting ahead of the explanation?
Posted by RodandDenise on Aug 20th, 2016
Eleanor,
Yes. If you keep following the links you will get to this post which answers your question. The short answer is that it makes no difference if the horse has no weight on the leg. http://www.rodnikkel.com/content/saddle-tree-blog-from-shop-and-desk/rethinking-saddle-fit-and-shoulder-blade-movement/