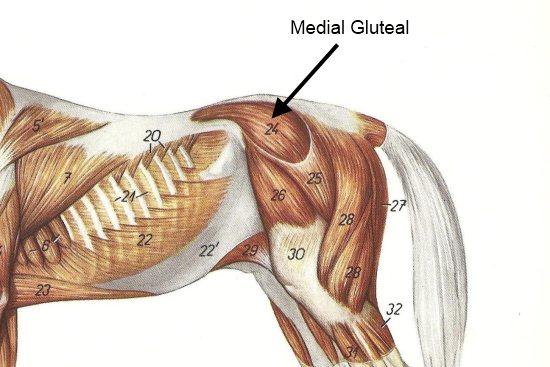 Well, I'm finally getting around to that hind end muscle I promised I'd write about before my interlude post.  The name of this muscle - the Medial Gluteal.  This is a massive muscle.  It makes up a large proportion of the top of the horse's rump, and when you realize how it attaches and what it does, you understand why it has to be so large. Note: The word medial comes from the Latin, where it means middle, so this muscle is also often call the Middle Gluteal muscle.  But medial sounds more anatomy-ish, so that's what I used. 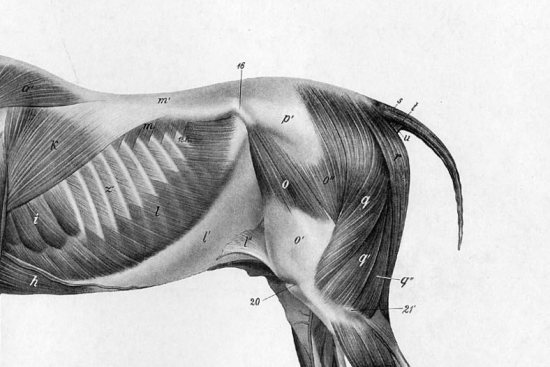 The medial gluteal is not directly underneath the skin, though it is close in places.  Its cranial (toward the head) end is covered by the thoracolumbar (m' in the above picture) and the gluteal (p') fascia.  (Fascia is that very strong, glistening white tissue you cut off your steak.  It acts as the insertion point for a lot of muscles.)  Its caudal (toward the tail) end is covered by superficial gluteal (o'') and the biceps femoris (q) muscles. 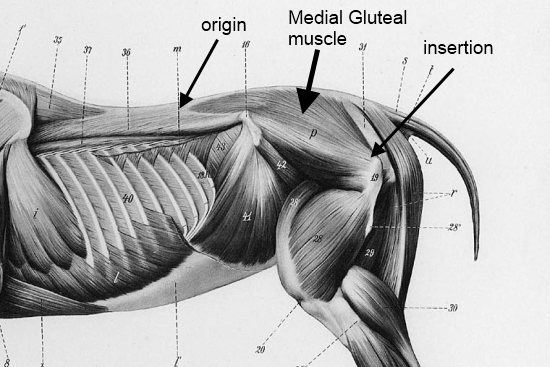 When you get those removed, you can see the extent of the horse that is covered by the medial gluteal muscle (p in the picture above).  It starts out small and flat, and its origin (the attachment closest to the body) can be as far ahead as L1.  It originates on the aponeurosis (large, flat tendon) of the lumbar part of the longissimus muscle which lies underneath it. 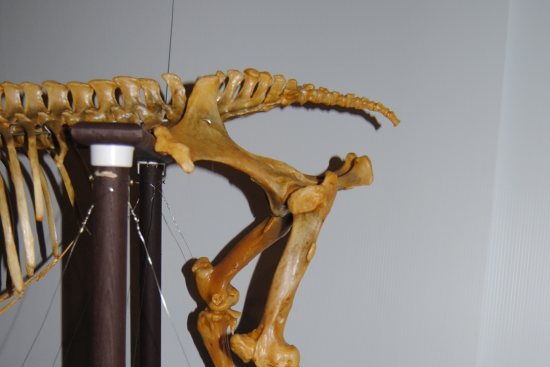 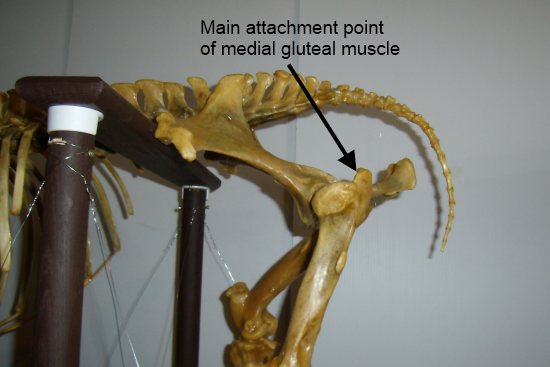 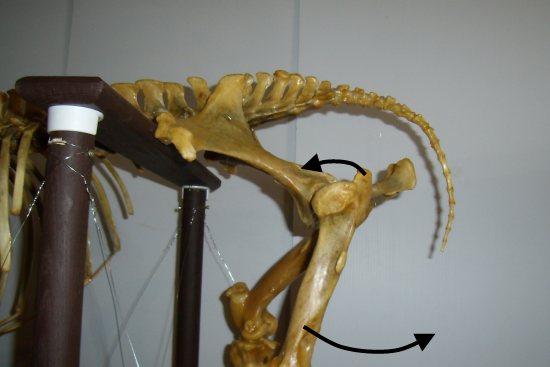 So you can see that if the medial gluteal pulls forward on the greater trochanter, it goes forward.  But because it is above the level of the hip, the rest of the femur is pulled backward.  And if you remember anything about levers from physics class, you can understand how moving that small section close to the fulcrum (hip joint) a short distance will move the much longer section of the femur through a much larger arc in the opposite direction.  But it takes a lot of power to move a large section by pulling on a small section - which explains why the medial gluteal muscle is so large, and so well anchored.

What does it do?

How does the saddle affect it?

Since most of it is over the horse's rump, why are we talking about it in terms of saddle fit?  Because of that cranial most attachment.  Remember that the very first bit can start as far forward as L1, and that all western saddles extend onto the loin of the horse.  While I will continue to repeat that weight (pressure) on the loin is perfectly OK, I will also continue to repeat that excess pressure - such as when the back bar tips Poke into the loin due to too little rock or not enough relief built into them for the shape of the horse's back they are on - is damaging.  And what is getting Poked is the aponeurosis and fascia that make up the origin of the medial gluteal.  When this happens, the horse won't use that muscle to its full extent, affecting the power of the hind end.

It can also affect how far the horse is willing to extend his leg both forward and back.  If anyone has had tennis elbow (like I have) you know that when you flex your elbow tightly, it really hurts because the muscle is pulling hard on the tendon that is sore.  But if you straighten your arm to the max, it also hurts.  While the tendon isn't being pulled on due to muscle contraction, it is being pulled on because the muscle is being stretched out to its maximum by the antagonistic muscles pulling the opposite direction.  In the same way, pain at the origin of the medial gluteal due to the muscle pulling on the originating tissues means the horse won't stretch his leg out as far behind.  But he also doesn't stride under himself as far as he normally would either due to pain caused by the medial gluteal being stretched out and therefore pulling on the originating tissues.

the horse loses power in his hind end, won't stride out as much if he is really having to move and won't collect up and move his hind legs under his body as far as normal.  So while the horse is fine carrying weight that far back, Poking with the back bar tip is a bad thing!

The medial gluteal is the only hind end muscle I am going to cover.  Next up - the major muscle of the back - the longissimus dorsi.

Posted by Kristi on Nov 14th, 2013
THANK you for this article! I have a mare who often has swollen, spasmed medial gluteal muscles the day AFTER a long ride, and my gut instinct has been that it's a saddle fit issue. This article sure supports that theory and makes me feel that I'm on the right track.
Posted by Amanda on Jul 23rd, 2014
I thank you for your article. I am fighting a bout of severe lameness in a super healthy and active horse with very poor conformation- you can't imagine the struggle we've had. That's it. That's the problem. You were very helpful to me, and to this thing that has gotten all I have been able to offer for eleven years.
« Previous
Next »