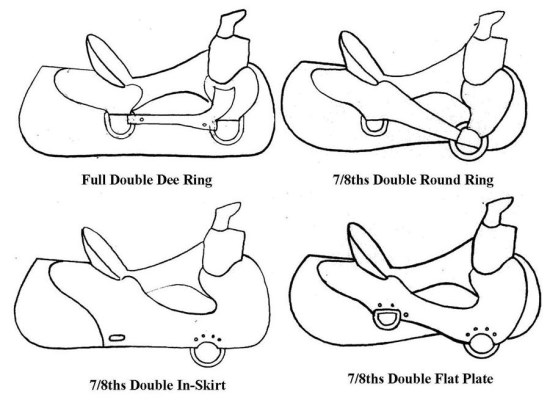 I'm intruding into the territory of the saddle maker here, but I discovered this write up I did a while back to explain rigging types to someone who probably knew little to nothing about them and I thought maybe the information would be useful to someone.  Saddle makers, of course, know far more about rigging and their designs than I do, but maybe even they will find this helpful for their customers.  Anyway, that is why it is here.

The four common types of riggings commonly used today are the D ring rigging, O ring rigging, plate rigging and in skirt rigging.  How the rigging is designed plays a big part in how it exerts its pull on the tree, and every saddle maker designs his riggings a bit differently.  However, here are the basics. 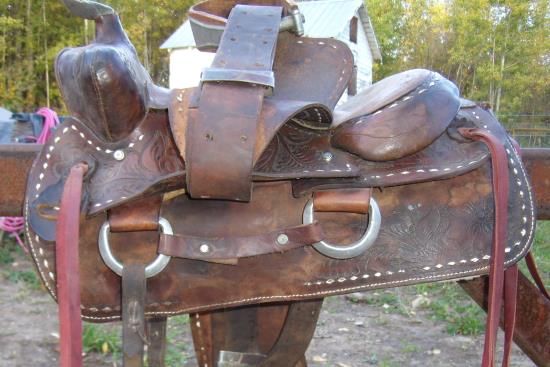 This is common rigging in arena roping saddles and working cowboy saddles built in Texas and area.  The rings are a D shape with the flat section upwards.  They have one strap of leather wrapped over the flat of the D and attached the tree above the D.  This is done on both the front and back Ds, so the front D pulls down just on the front of the saddle and the back just on the back.  The shape of the D means that the rigging must be attached to the tree directly above the ring. 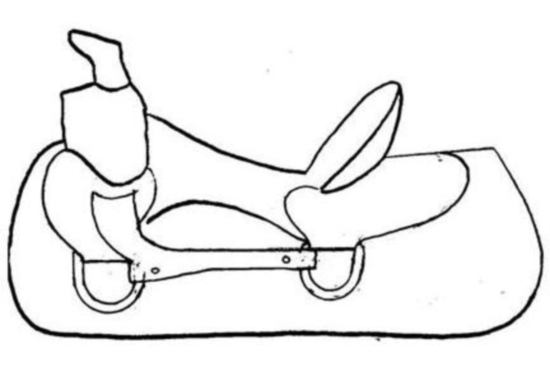 The connecting strap that runs between the two D’s doesn’t change the direction of pull on the tree but it does stabilize the rings, helping to prevent them from being ripped off the tree by being pulled too far forward or back.  It also helps the stirrup leather not to get caught up on the front D and to slide over it when the stirrup needs to be forward.  Why is it needed?  The stirrup leather runs over the top of the bar, bends under it and sits in the stirrup groove beneath it, then comes out below the bar and goes over the top of the connecting strap.  The drawing shows a good design where the connector piece continues upward, acting as a stirrup wear leather as well.

D ring riggings are generally only set at full or 7/8th because any farther back than that and the rigging will impede the forward swing of the bottom stirrup leather.  The idea behind a “full double D” is that it holds the saddle down tight at both ends for roping.  (We have previously discussed why holding a saddle down tight at the front is a bad idea.)  It can also be fast, easy and cheaper rigging to make, so is common on a lot of inexpensive saddles. 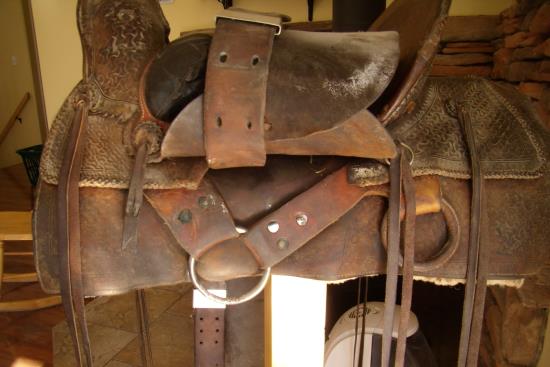 This was the traditional rigging of the vaqueros of Mexico and the west coast and is still commonly used in a lot of saddles.  The main cinch ring is O shaped, which means the rigging can be hung at an angle from the tree to the ring so the attachment point doesn’t have to be directly above the ring.  This enables the rigging position to be set farther back.  The strap from the ring to the back of the saddle is an integral part of the rigging and directs some of the pull farther back on the tree.  As in the picture above, the rigging is often built of straps of leather wrapped around the ring and attached to the tree. 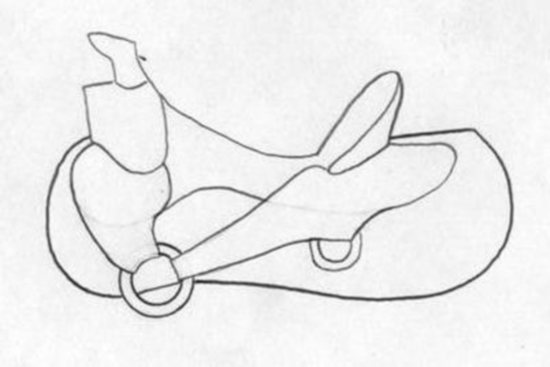 The drawing is of a better design since it distributes the pull over more of the tree due to its larger attachment area.

Again, this type of rigging can inhibit stirrup swing, but depending how low the ring is hung and other design factors (see the cut back of the leather in the drawing) it can be used all the way back to the center fire position.  Note: The O ring designation applies only to the front ring.  The back ring can be any shape. 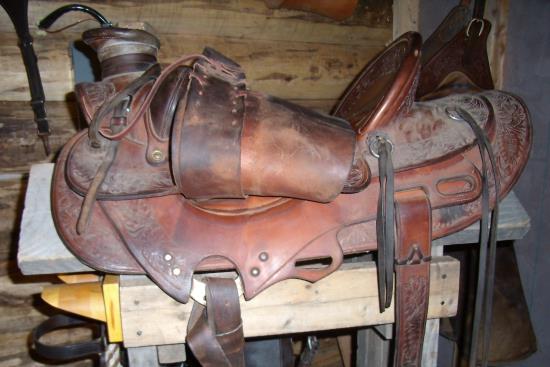 This rigging type is very common in today’s Wade and working cowboy saddles in the west.  It has the advantage of having less bulk under the leg because the rigging plate is riveted into the rigging itself rather than having leather doubled over and riveted together.  The back ring can be hardware of various shapes or it can be a slot in the leather, as in the picture.  If well made, the slot type holds up very well, as shown in this well used cowboy saddle.  (The extra slot behind the front rigging is the latigo carrier and the extra slot behind the back cinch is a hobble carrier.) 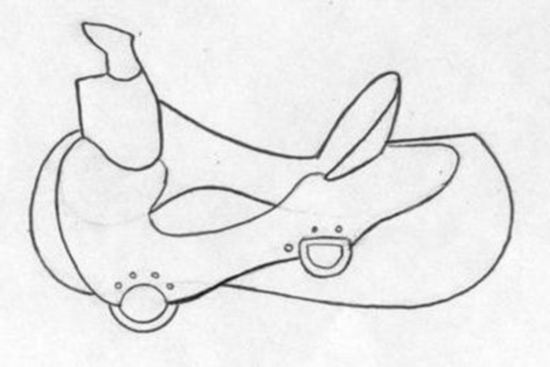 The design of the plate rig means the pull is distributed more centrally on the tree, and since the rigging is made of thick leather sewn together, as opposed to just straps wrapped around the rigging, it can be shaped to let the stirrups swing more forward than a D or O ring rigging, even if it is positioned a bit farther back.  The rigging hardware is specially made for a plate rig, but comes in many different shapes, as seen by comparing the drawing versus the picture. 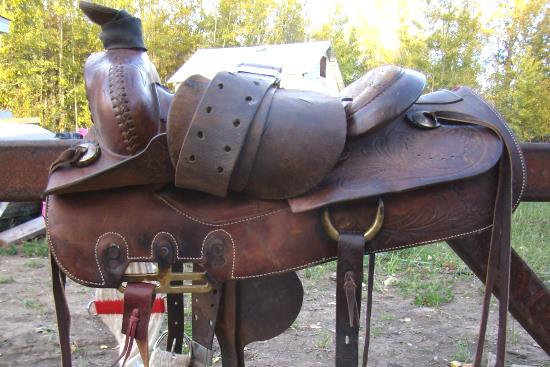 This rigging type initially got a bad reputation because some of the earliest ones were poorly made and failed quickly.  When well made, they can be as strong as any of the other rigging types.  Some hardware used with in skirt riggings even gives you the option of multiple latigo positions, as in the picture.  (A concern here could be pressure points at the front or back of these long, straight, solid pieces of metal as the horse bends.)  In skirt rigs can have the back rigging as a separate piece, as in the picture... 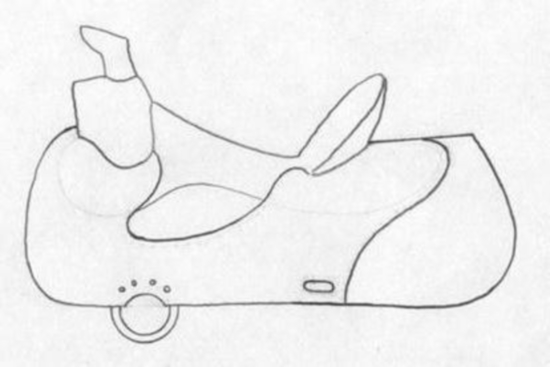 Or the back rigging can be built into the skirts with either hardware or a slot for the back cinch.  Depending how the skirts are designed and attached, there should be minimal stirrup swing restriction, regardless of rigging position.

One advantage to an in skirt rigging is a lighter weight saddle (all else being equal) because overall, there is less leather needed than in other types.  Another advantage is that there is less bulk under the rider’s leg because there isn't the extra rigging layer overlying the skirt.  The disadvantage is the cost of repairs if something goes wrong since you are replacing skirts rather than just the rigging.

So there you go - a quick run down on the basic types of riggings commonly used today.  If any saddle makers want to discuss or add to the information here, please do so by writing a comment below.  After all, riggings are really the saddle maker's field...

(Thanks go out to an excellent saddle maker, Keith Seidel, for the use of his drawings in this post.  Check out his website at www.seidelsaddlery.com.)

Posted by Cindy Busby on Apr 6th, 2017
Thanks for the informative information. I have a treeless saddle. I find that with the saddle cinched at front only, the back of my saddle tends to slip left or right. I'd like to modify the rigging to create a more centered fit so pull is created both in the front and farther back. Can you give me some advice as to how I can accomplish this. Thanks.
Posted by RodandDenise on Apr 6th, 2017
The problem with treeless saddles is that there is no solid shape in the saddle to match the shape of the horse underneath, and shape matching is primarily what keeps saddles in place. Yes, the cinch holds it onto the horse, but unless the shapes match (or you turn the horse into a peanut shape by over tightening the cinch dramatically!), there is really no reason why things shouldn’t move, especially side to side. Most treeless saddles (and we are not experts on what is out there by any means) have a solid front to them, and that, sitting on the sides of the withers, will give some stability there. Although most also have a solid cantle, it will be sitting on top of a relatively flat part of a horse’s back so it can slide around up there quite easily. All that to say that maybe moving the rigging won’t help.

But it is not likely to hurt either. However, we were tree makers, not saddle makers, and this post kind of stepped into the area of the saddle maker, so we can’t really help you specifically. We would suggest that you talk with saddle makers about it and ideally, let them make the change for you. Rigging is a real safety issue so they should know how to make the change and keep the saddle safe. If you feel confident to do it on your own, we would still suggest getting a good saddle maker’s opinion on how the change should be made.

Hope this helps a little at least!
Posted by teri on Apr 3rd, 2019
I was looking to buy a saddle, and came across many different types of rigging, including in-skirt, which I'd never seen, and was leery of. Thanks for your explanation! I'm not so scared of the ones I wasn't aware of now.
« Previous
Next »