So why was it soring horses? 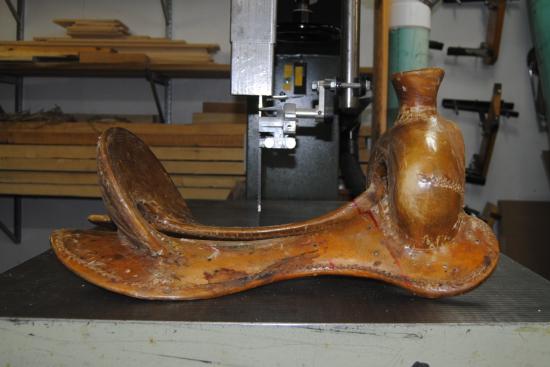 We were sent this tree to duplicate because the owner said it was broken.  (I have written posts lately about this tree and some of the ways we do things differently.)  It had functioned well for years as a working cowboy's saddle (though he said he had to be careful with the Arizona bars) but lately it has been soring up horses.  There was no specific wreck or time when he thought it may have been damaged, but something had definitely changed, so he figured the tree was broken. 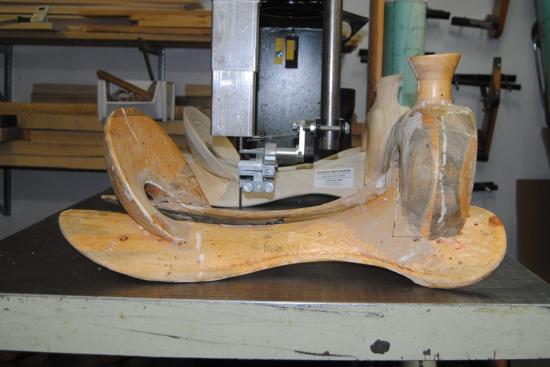 But if you have been following the story line, you will have noticed that the tree seemed to be intact - until we took it apart, that is.  So why was it soreing horses? 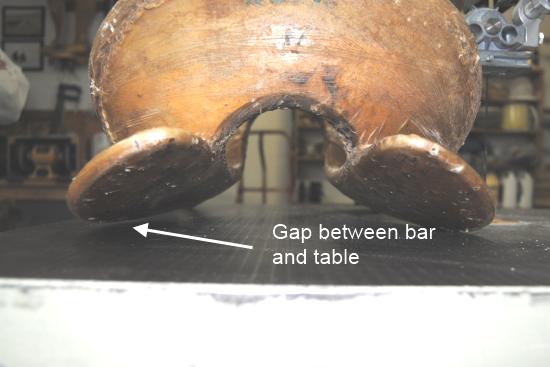 When we first got the tree, we checked in out in a few ways.  One was to put it on a dead flat surface - our bandsaw table - and see how square it still was.  As you can see in the picture, there was some lift under one corner.  It wasn't a huge amount - less than 1/4" - but it was some.

Now how significant this is, is debatable.  Some people say that a tree can never be out of square at all or it is unusable.  Others say a small amount isn't ideal by any means, but isn't going to harm the horse.  (We fall into that category).  When you have the tree on a flat surface like this, take a good ruler and measure the distance from the table to the bottom of the bar.  A small amount of distance can really make a tree "rock" a lot on the table.  When you think about it, if you have 1/8" lift off the table (which would be the maximum we would accept), and you put that tree on the horse, it will most likely set so there is 1/16" difference on each side of the horse.  How many horses are that symmetrical?  When we were first starting out, an older, well respected saddle maker we know told us that he had seen lots of trees in working saddles that were really quite off - up to 3/8" - that had never sored a horse.  So, while this distance was something to be aware of, we are not at all willing to say for sure that this was what was soring the horses.

A good test to do to see if a tree is broken is to push, pull and squeeze anywhere and everywhere to see if you can get any movement out of it at all.  When Rod did this when we first got the tree, there was some movement - which is never a good sign in a tree.  He could get the cantle to pull towards the fork a little bit, and there seemed to be some movement where the left bar joined the left side of the fork as well.  Definitely there was more movement on the left side of the tree than the right.  Knowing that even minimal movement with the rawhide on can hide nasty surprises underneath (as we saw with the one broken tree we have had come back)  we were expecting to find more than we did. 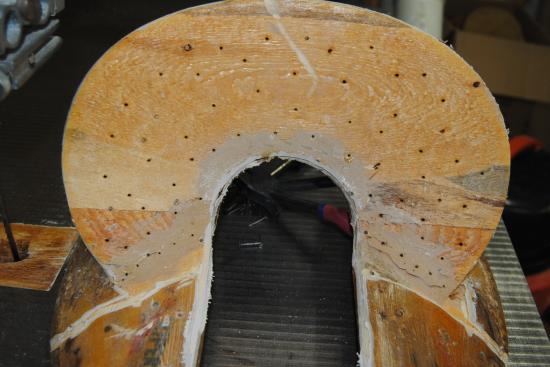 And we did find that although nothing fell to pieces when we took the rawhide off, there were cracks and lose connections in a few places. 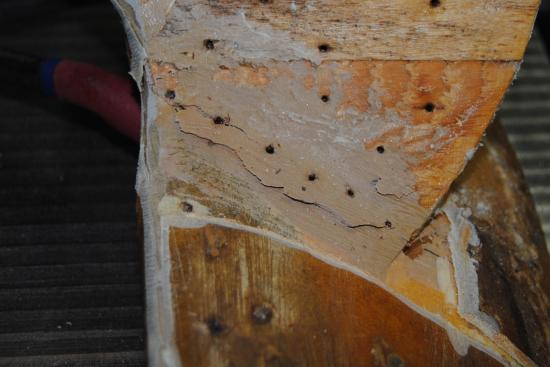 While the crack in the body filler showing a loose connection on the left side of the cantle is pretty obvious... 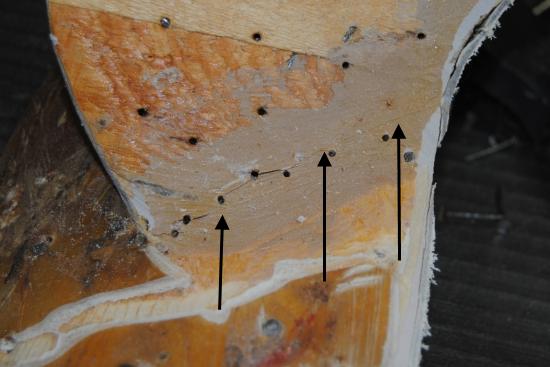 the one on the right needs closer inspection to see. 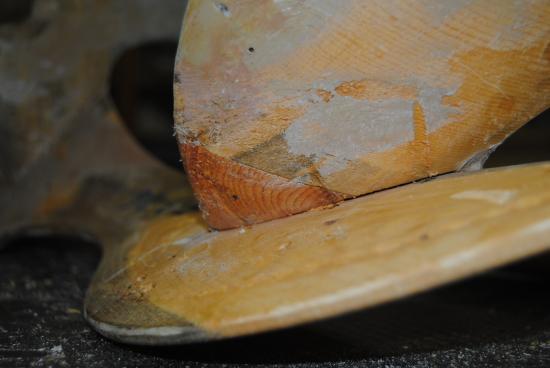 The lamination at the bottom of the left side was also loose.  Not totally broken off, but the glue wasn't totally holding it real well either. 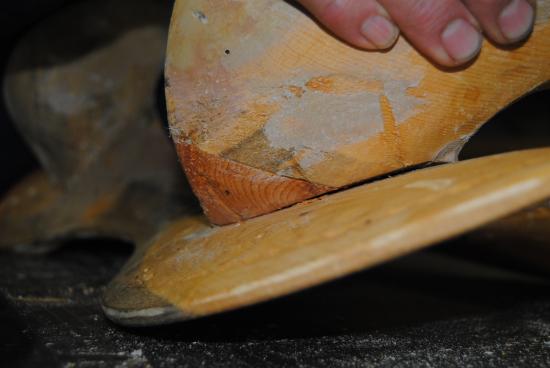 And with even a little pressure on the cantle, you can see how much the cantle was pulling away from the bar.  Rod didn't pull too hard because he was sure he would either break the cantle or pull it off, damaging the parts we needed to use for patterns. 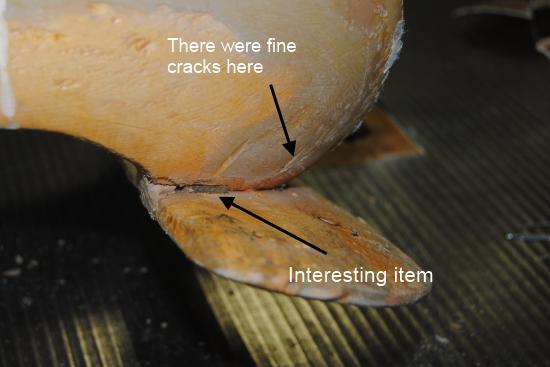 You can't see it on this picture, but there were slight cracks in the body filler over the lamination at the back of the cantle on the right side too.  You could get a little bit of movement at the lamination, but not much.  And the connection between the bar and the cantle didn't open up with pressure like the left side did.  However, there was an interesting item that we noticed even at this stage... 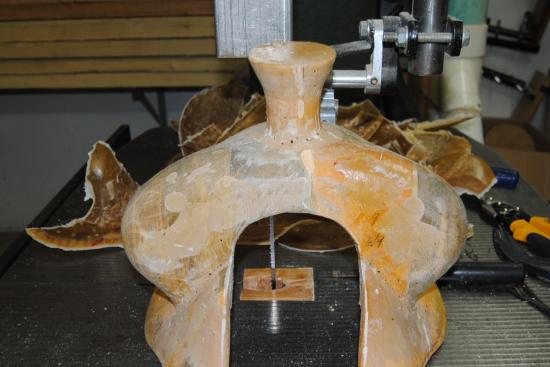 Looking at the fork from a ways back, it looks OK. 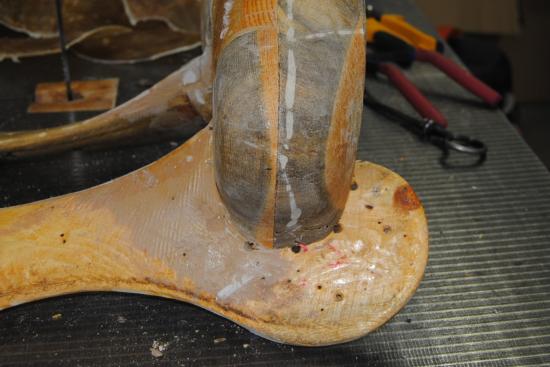 The right side was tight with no cracks in the body filler anywhere. 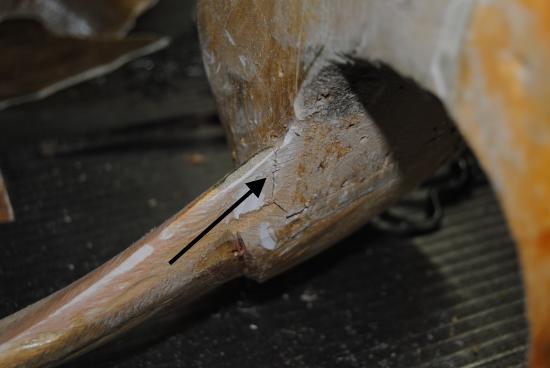 But the left side was a different story.  Looking across at the connection between the gullet and the fork cut, you could see a crack in the body filler.  (There really was liberal use of body filler on this tree, but we have seen trees with more!) 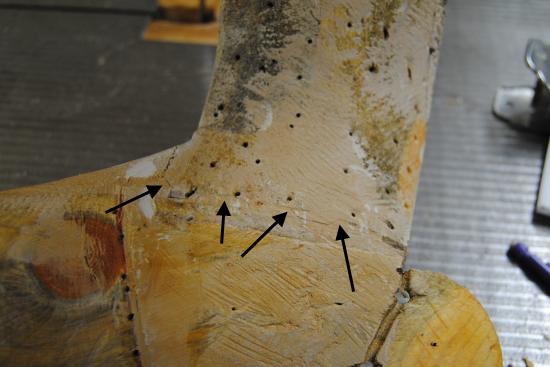 That crack continued under the gullet the whole way through to the gullet lip. 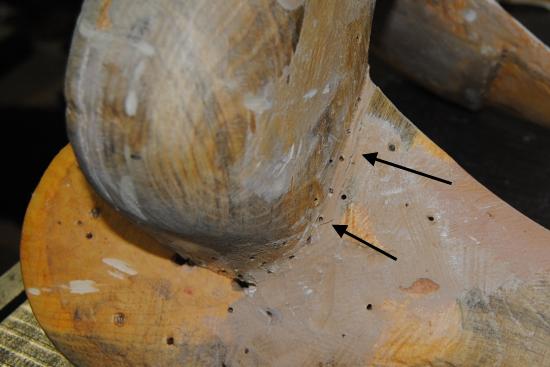 It also continued down the back of the fork where the fork fits into the fork cut.  And sure enough, when Rod put pressure on it, there was movement between the fork and the bar on the left side. 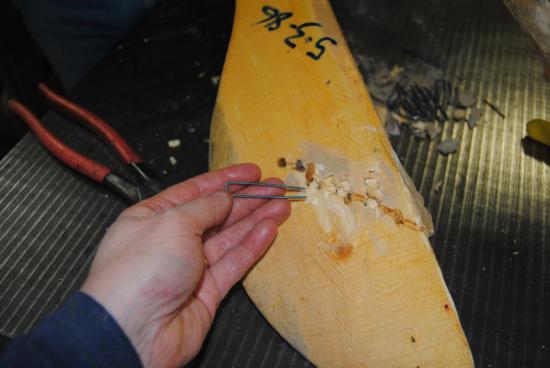 There was no glue holding the wood together (there almost never is on production trees) and while multiple staples air gunned into pine can hold the pieces of a tree together fairly well, there is nothing about a staple (as opposed to screws or spiral nails) which can stop the pieces from pulling apart over time with lots of jerks from roping and the pressures that come from riding for many years.  The small contact area between the bars and both fork and cantle as well as the height of both would have increased the torque on the connections as well.  So some parts of this tree, while still held in place fairly well by the rawhide, were loose.  And that would result in movement. 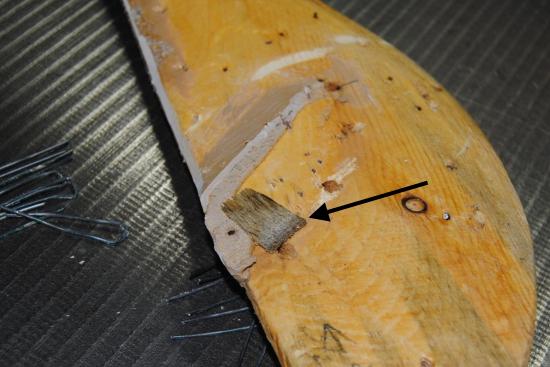 But remember that interesting item we found between the back of the cantle and the bar on the right side of the cantle?  It turned out to be a small shim glued to the bar. 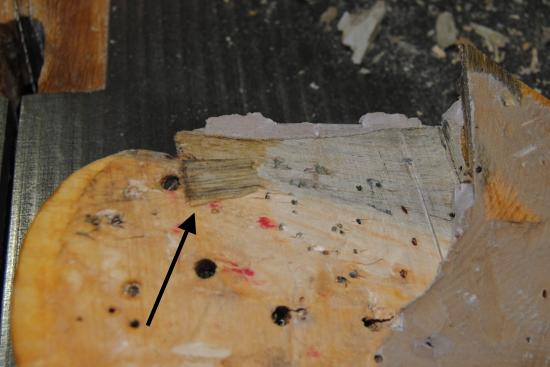 And what was interesting was that we found a similar shim under the front of the fork on the left side too. 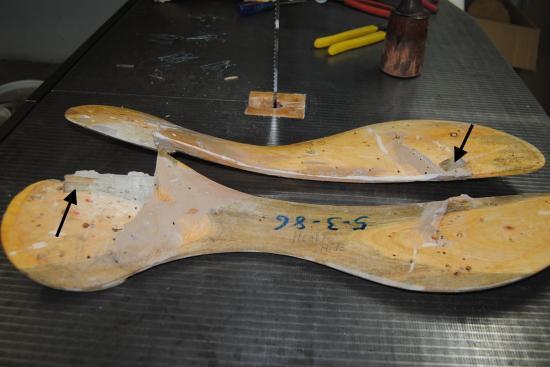 So in looking at it, we suspect the tree wasn't going to be square, with the left front/right back lifting off the table, so they shimmed those corners to make the tree square.  (Pieces coming off duplicating machines, especially the old ones, are rarely totally symmetrical.)  But maybe they over compensated, and the tree now rocks right front/left back.  Or maybe the stresses on the tree from roping and general use for a lot of years affected things, causing a bit of a twist in the tree.  And did the shim on the left side of the fork contribute to the loosening of the connection there?  Maybe, since with any pull forward on the horn, it could act as a fulcrum around which the fork would tend to rotate.  Hard to say for sure. 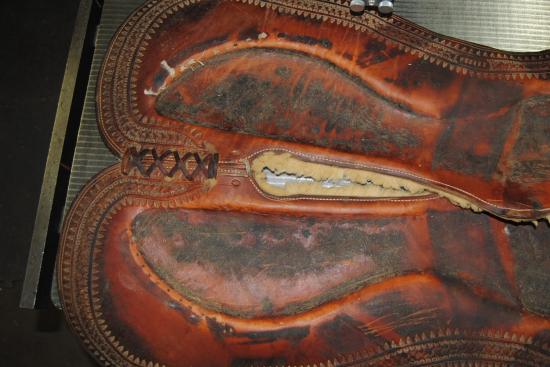 Something else that is very useful to see when trying to figure out how a tree has been working on a horse is the wear marks on the skirts.  Starting off by looking at the back bar pads, it is obvious the wear was more toward the inside of the bars, and then a lot along the edges as well.  This may seem contradictory, as too wide an angle means the bars contact on the inside while the outside edges don't have much pressure on them.  On the other hand, if the bar angle is too narrow, then there should be a lot of pressure on the outside edges of the bars and not much closer to the middle.  But both look to be true in this case, so how do we explain that?

Remember than when you put weight in a saddle, you press it into the soft tissues of the horse to a certain extent.  (Any pressure on muscle indents it to a certain extent unless the muscle is very firmly contracted.)  The more surface area in contact with the horse, the more the pressure is spread out and the less "indenting" there is.  In this case, the edges had to have a fair amount of pressure on them, enough to keep the outside third or so of the bar from carrying much weight.  Then the contact resumed further toward the middle.  At least the back of the skirts look to have fairly symmetrical wear. 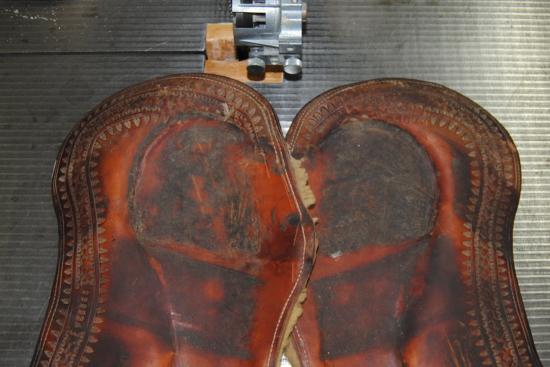 But look at the difference between the front bar pads.  The right bar pad shows much more even contact than the left bar pad, but the whole thing is a lot darker.  Does this mean that over time there was more pressure on the right side than the left?  Could very well be.  We would have to find out where the horses were getting sore to know more at this stage.  But if the owner did a lot of doctoring where the horse was faced up to the cow and holding the rope while the cow was being treated, that could also explain the darker wear pattern on the front right bar pad too.  (Right handed ropers tie off so the rope goes on the right side of the horse's neck, putting a slightly off center pull on the saddle.) 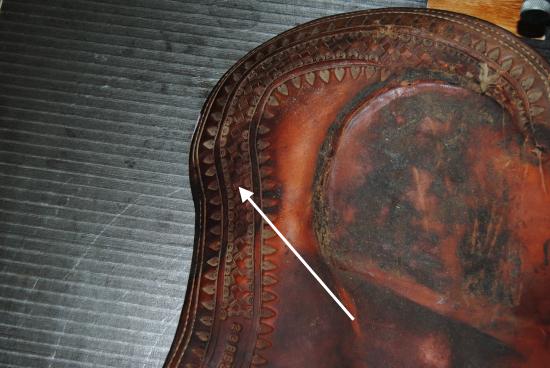 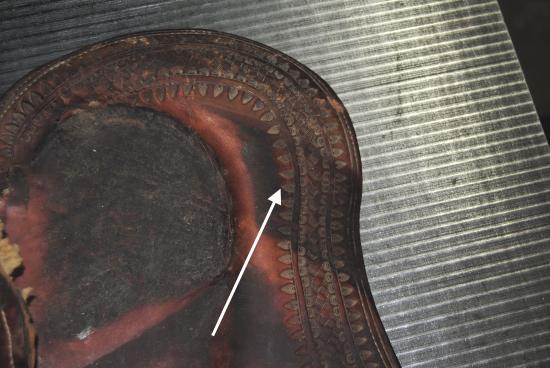 versus the right side.  Again, the right side is darker.  Why?  There could be a few reasons.  Maybe the rigging wasn't built or put in totally symmetrically - but then it would have caused problems right from the beginning.  Maybe it has stretched unevenly, putting different amounts of pressure on the two sides.  That could be true, so mounting it evenly again will be very important.  Maybe the skirts were not totally evenly blocked, so you see a difference in the rigging pressure because of different skirt position.  There could be a number of reasons.

So - why was this saddle soreing horses?  We have no dogmatic answers.  We suspect that things being loose causing movement in the tree is most likely the biggest culprit.  It didn't take a lot of pressure for Rod to be able to lift the back of the cantle off the bars, so if it shifted with that little pressure, it may have been shifting with just normal horse and rider movement too.  We know of a case where horses were getting rubbed and sore just because the skirts had come a bit loose from the tree and were moving around under the bars a bit.  Reattaching the skirts tightly to the tree again solved the problem.  So movement within the saddle can and does cause problems for horses.

Maybe part of the problem is that the tree was asymmetrical.  Looking at the wear patterns on the front bar pads, it sure appears that there is asymmetrical wear.  And the lifting off at the back left could result in extra pressure on the right front, if that is the way it sat on the horse.  Or did the rigging contribute, and if so how?  And we can never forget about the influence of the rider either.  Maybe this is a case where a lot of things added up to make a problem.  We don't know the total answer here, but we do know the new tree is solid, it is symmetrical, and it won't move.  This last tree, even with the differences in how it was made compared to our trees, lasted him 26 years at least.  This new one should last him even longer...

If anyone has other ideas on this, we sure would be interested in hearing them.  Just add a comment below.