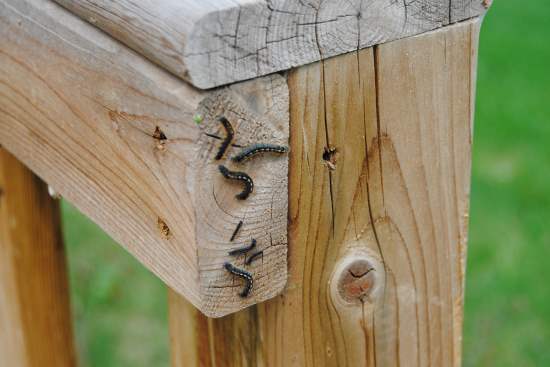 Well, this post does talk about trees, but not of the saddle variety.  It talks more about really, really, REALLY repulsive things called tent caterpillars that are in our yard in plague proportions.  We had them badly last year, but nothing compared to this year.  Last year they started in June.  This year they were well on their way by mid-May.  This picture was taken last week, on our deck railing, and it shows you what these things look like close up.  Notice the variation in size due to different hatching dates.  Cute and cuddly...  NOT!! 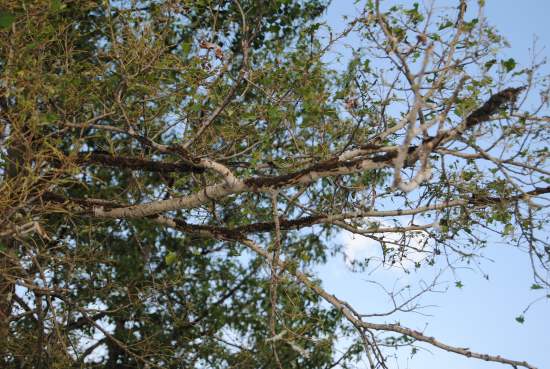 They prefer the aspen poplar, and that is what they eat first.  Aspen are often called white poplar, because their bark is white.  Really, it is... 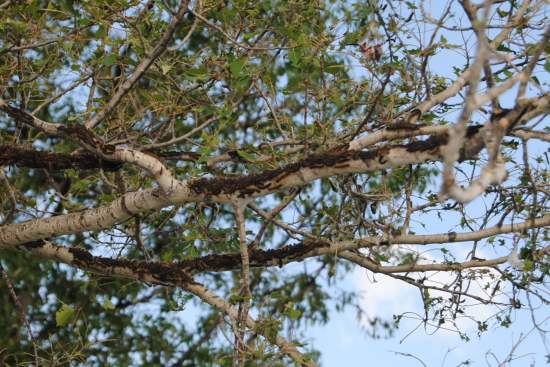 What you are seeing as black is actually hordes of caterpillars...  And the trees for miles around are black. 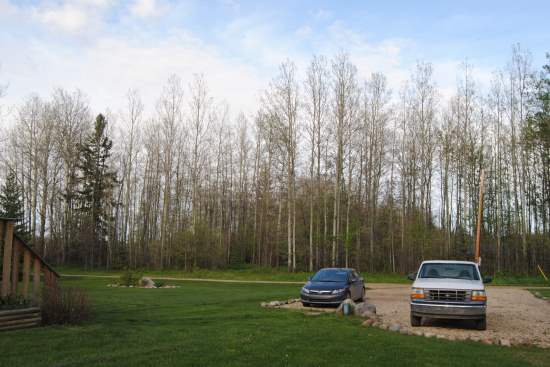 Not, this is not a winter picture I have photoshopped to have green grass.  These trees were fully leafed out and have been completely defoliated. 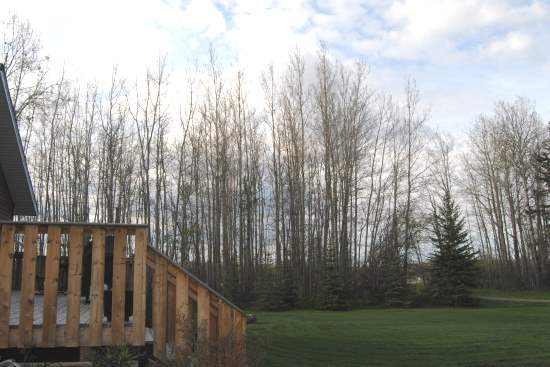 Now that they are pretty much done all the aspen, they are moving on to other things - like the willows and black or balsam poplar that are also native.  They are even eating the new needles on the spruce trees. 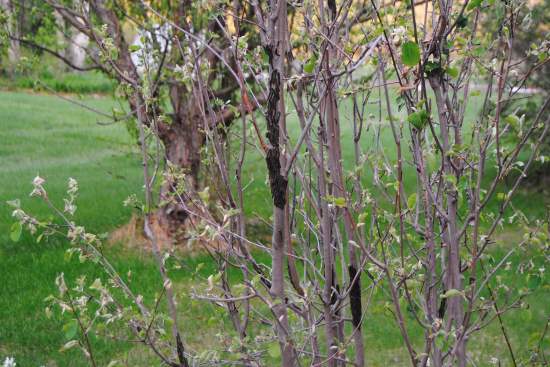 They are also eating the trees in our yard.  Here is what the saskatoon bushes looked like last week.  (Not sure what saskatoons are??  They are a native Canadian berry that is very good used in pies and jam.  They are now getting sold commercially as "saskatoon berries", but to anyone who grew up here, they are just saskatoons.  Adding "berries" is redundant.)  They still aren't totally bare, but you can see how chewed most of the leaves are.  The caterpillars really do have some things they like more than others, and the maple tree out back has them on it, but the leaves just have the occasional munch out of them. 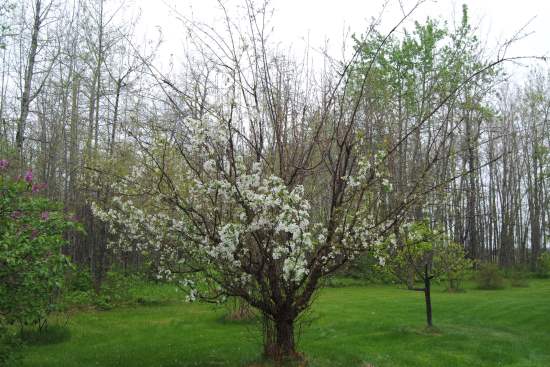 Our ornamental apple tree, however, is a different story.  All those bare branches were in full blossom a few days ago...  The crab apple is just as bad, and the Norland apple is getting chewed as well, blossoms and all.  Highly unlikely we will have any apples this year... 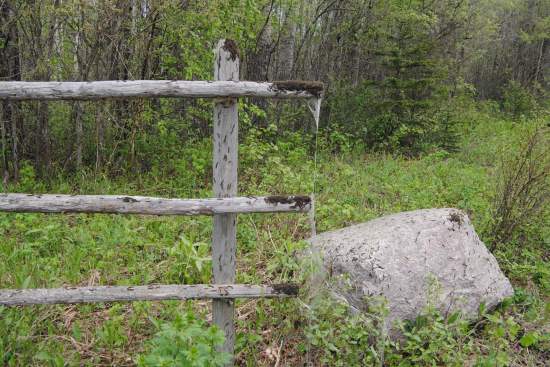 They are just everywhere.  The rails at the entrance to the driveway look like we are decorating for halloween. 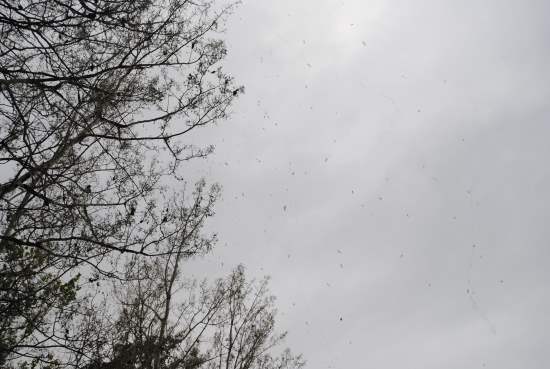 These caterpillars make a thread of some sort to make their "tents", so they can hang in the air from the trees and fall on you.  Walking in the woods is not something we are doing these days for enjoyment... 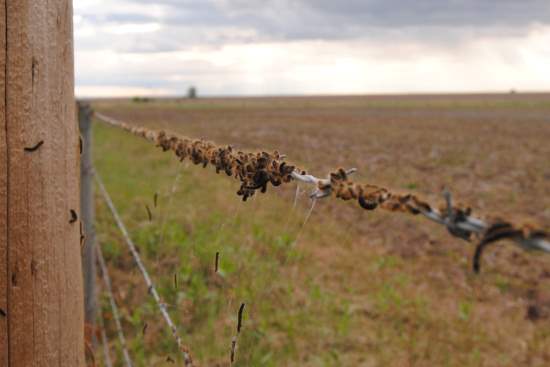 They go on anything.  Here is a barb wire fence across the road from us... 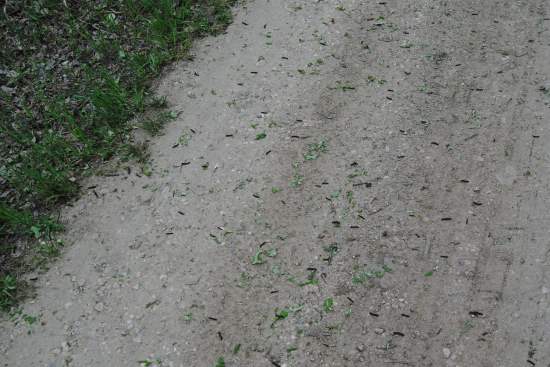 They are covering the roads, to the point that the highway is black in places with squished caterpillars.  I have heard stories of roads actually getting slippery with so much caterpillar gut spread over it, but they aren't that bad here - yet...  This is our driveway last week, when there were still some remnants of leaves around.  You can see the bits of chewed leaves that have blown off the trees. 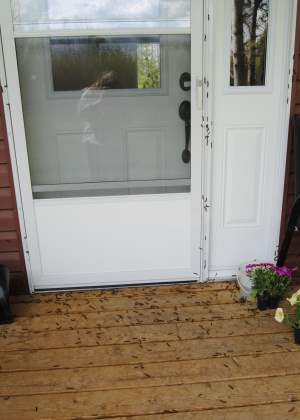 Here's our front door.  No, I'm not the best housekeeper in the world, but even if I did sweep them all off, they are back in a couple of hours just as bad...  So watch where you step - and kill as many with each footfall as possible!! 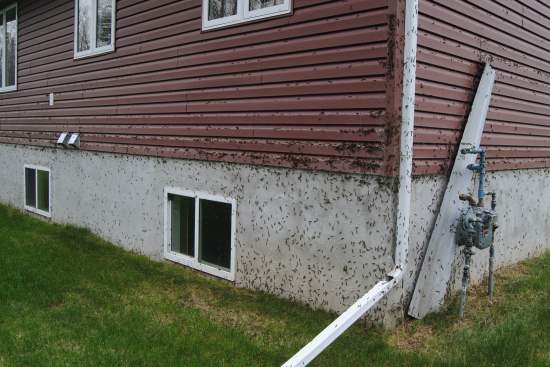 But you can see that the front of the house isn't nearly as bad as the back of the house!!  Once the plague is over (and the life cycle will move on to cocoon stage in a couple of weeks, we hope) we will do a major pressure wash of the house and shop.  In the mean time, it is a waste of time and water. 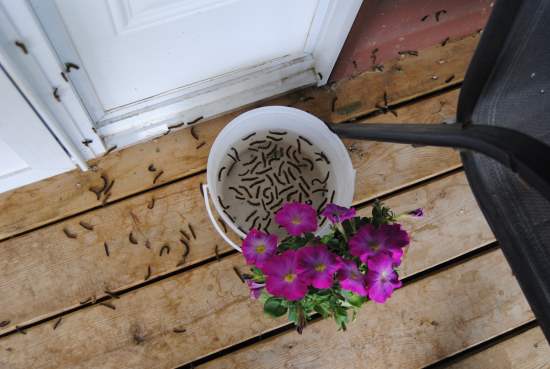 Speaking of water...  Changing the poor dog's water bucket is a regular event too.  Actually, we have kept her inside for a lot of this last week because really, where could she go without being crawled on? 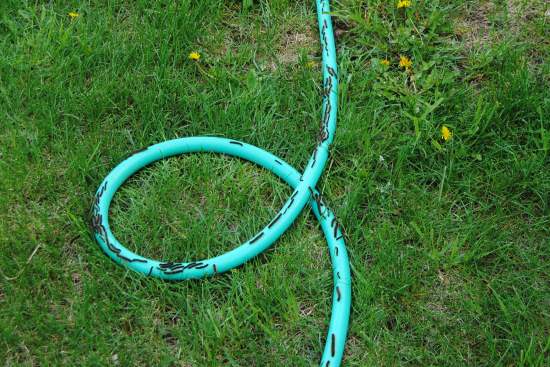 Even the garden hose is covered with creepy crawlies. 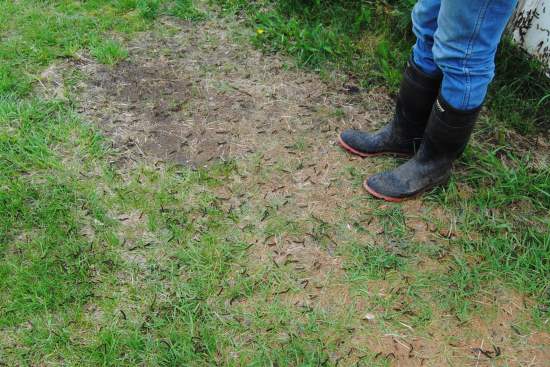 And despite the fact that the nature of caterpillars is to climb up anything and everything, the ground is still covered with them. 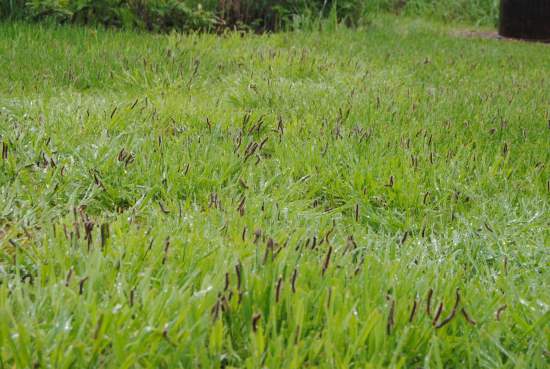 So they climb the grass!!  This picture was taken early in the morning, and you can see that they have all climbed as high as possible on the grass to wait out the cooler night.  When they warm up, they go back down and crawl around looking for something higher and something to eat. 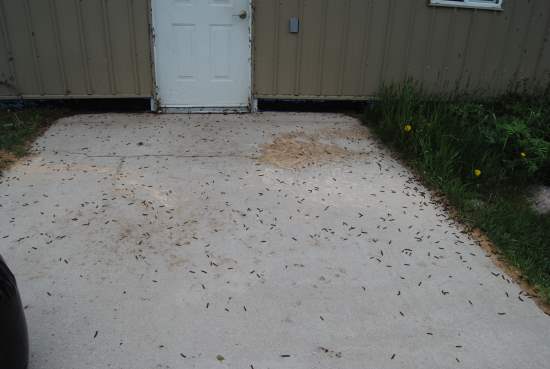 But to show you how really horrible they are - they have even stopped Rod from working outside!!  NOTHING stops Rod from working outside except rain and extreme cold, so this is remarkable.  But he got tired of sweeping them away every 10 minutes to avoid being crawled on, and that was what it was taking.  So he moved back into the dirty room and has been grinding away in there for the last half of this week. 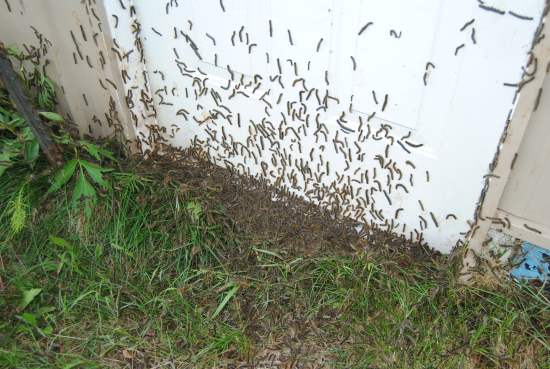 But here is what really gives me the heebie-jeebies...  This was the door to our rawhide room today.  Totally unbelievable...