Home > Saddle Tree Blog - From Shop and Desk > You never know where, or when

You never know where, or when 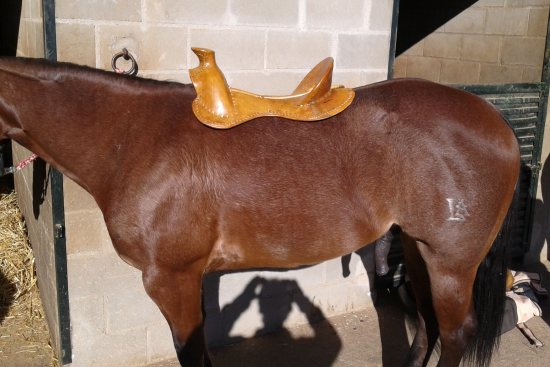 We never know when or where one of our trees will turn up.  Despite the fact that they are almost all built to order for a specific saddle maker and usually for a specific customer, they sometimes move around or sit, unbuilt on, for years.  For example, this picture was recently sent to us from Spain.  The tree was one we built and shipped to France in 2007.  This customer was a student of the maker who originally ordered the tree.  They like the tree, but the customer wants a Buster Welch fork, not a Wade.  They were trying it on to show us how it fit.  Since we keep records of all the trees we build and the customer could tell us where he got this one, we could tell him what the fit of that tree was.  Combined with the Dennis Lane measurements sent, we are very confident on the fit of the new tree we are building.

Ready to build after 14 years

We got an e-mail today from an old customer.  We built him a tree in 1998.  He wrote to say that he is now ready to build on it and was asking about where to find some hardware.  Since he is Canadian, we directed him to Caledon Leather Sales in Calgary where a lot of custom saddle makers get their supplies.  (Note: Caledon Leather Sales is now longer in business.)

Finding old specs for a customer

A couple weeks back one of our regular customers e-mailed to ask if we still had the specs on a tree we built him about five years ago.  His customer now wanted another one just like it, but he had lost the paperwork on the specs.  He gave me the fork type and a good guess at seat length and fit specs.  Fortunately, he hadn't built a lot with that seat length in that time period and we pretty quickly figured out which tree it was.

Another time a guy called with the story that he had borrowed a saddle from another guy, who had bought it from another guy, and he wondered if we could figure out the specs on the tree because he liked it so much he wanted to get one just like it.  Fortunately he knew the saddle maker's name and a bit about the history of that saddle, so we were able to figure out which tree it was and build him one the same.

Keeping records on the trees

I'm always amazed at where these trees end up.  We can't say we'll always be able to figure out what tree is in what saddle, but with a bit of information and some detective work, we can often narrow it down and even figure out the exact tree.  Right from the start we have kept a lot of data on every tree and one of the advantages of computerizing the specs is being able to find that information fairly quickly. 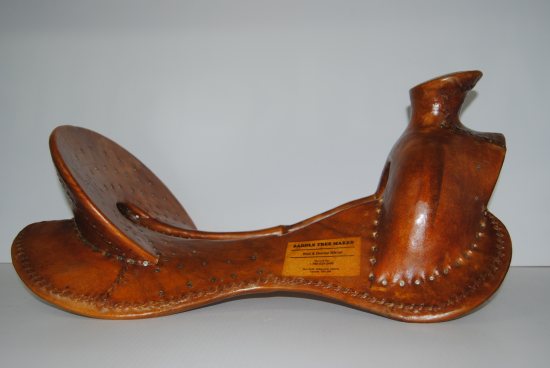 Right from the start we have also put our name and a serial number on every tree.  The location we put it has changed over time, but now our card goes on the bar under the rawhide over the right stirrup groove area where it might be seen if you lift up the fender far enough.  The saddle maker's name and the tree number go in the same spot on the left side of the tree.

We also put the final customer's name on the tree if the saddle maker wants to give it to us.  That is really helpful when looking for old specs.  If we are told that the saddle was built for such and such a rider, we can easily find that tree - if our customer gave us the name.

It is fun for us to learn more about where these trees go and when and who finally builds on them.  And with the record system we have, it is often possible to help our customers and others who end up with one of our trees, either bare or in a saddle, find out the specs on their tree.