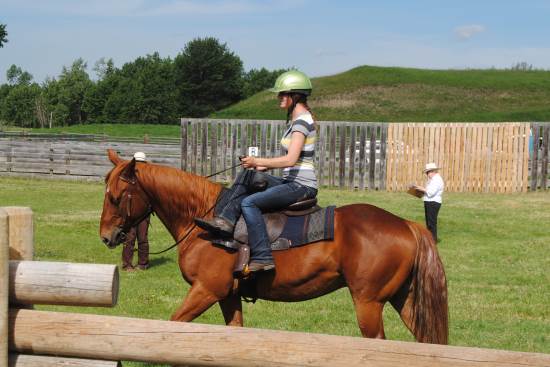 We were way down south last weekend, at the Bar U Ranch where three days of a side saddle clinic was held.  Lee McLean has worked for months preparing for this weekend, and all her hard work paid off.  There were 24 participants in the clinic and 26 riders in the grand parade on Sunday.  Riders came from as far away as Ontario, New Brunswick and Washington as well as the more local Albertans. 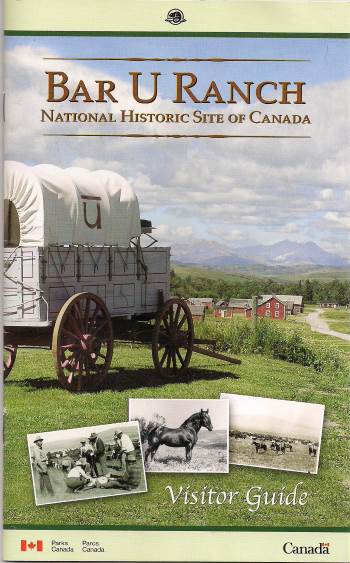 The Bar U is a National Historic Site of Canada that is preserving the history of the real ranch life of western Canada. It is well worth the visit if you are in the area. 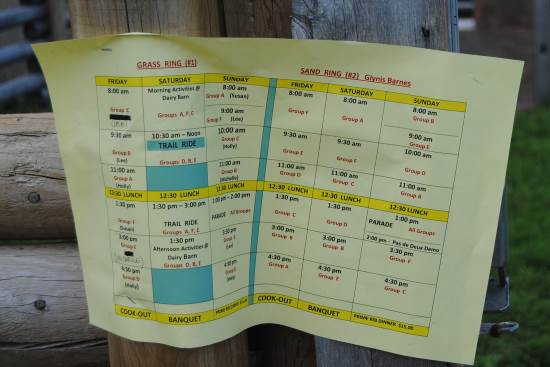 The clinic itself was very well organized. The participants were divided up into six groups so only four were riding in a class at a time. They were all scheduled to be in five, one hour lessons, a trail ride if they wanted to go (astride or aside) and, of course, the dress parade! 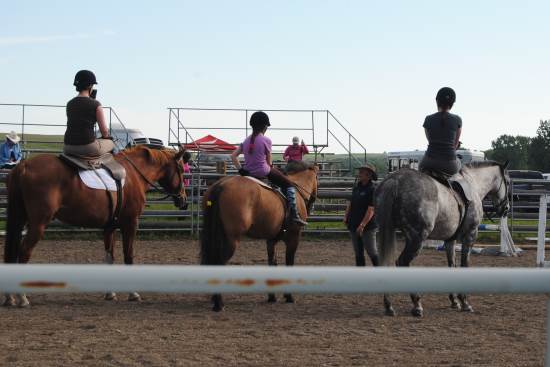 They had two rings going at a time. Glynis Barnes taught all the classes in the sand ring. She taught everyone, from absolute beginner to others who were already experienced in riding and even jumping side saddle. (I’m really sorry I didn’t get pictures of the jumping.) Excellent teacher with a wonderful sense of humor… And yes, if you get tired or cramped, it is OK to throw your right leg over the horse for a rest – at least in this century. It is the right leg that does most of the hard work when riding aside. Or at least that is what we understand. Neither of us has tried it – yet… 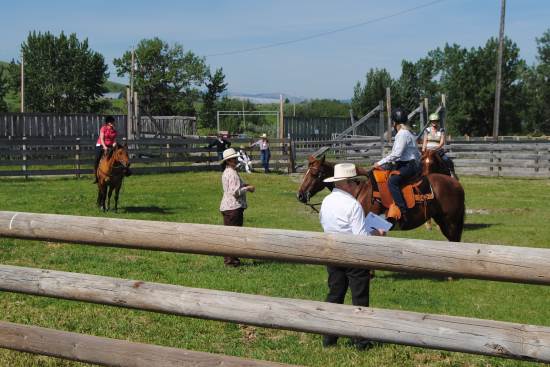 There were at least four different instructors in the grass ring. Here Lee McLean (in the print top) is teaching the rider’s first class on Friday morning. There were also lots of volunteers working during the clinic. There was always a scribe during the lessons taking down the comments of the instructors for each individual rider. They were given these sheets later to take home to help them remember what they could be working on later when riding by themselves. 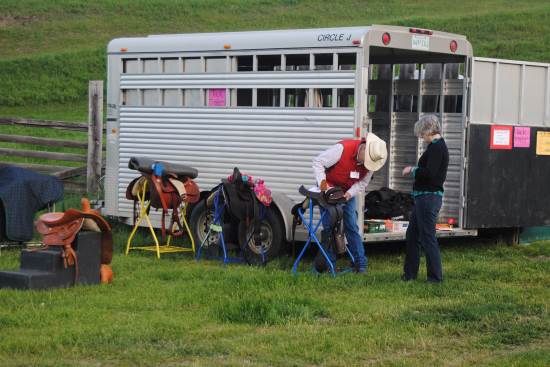 I think the hardest part of organizing the clinic must have been arranging all the horses, saddles and other tack that were needed. While some people were close enough to haul their own horses and saddles to the Bar U, others came with just saddles, or just horses, or just themselves. Lee had arranged to have well trained, quiet, local horses available for those who needed them, and she had personally been riding them since May so they were in shape for the clinic. She had also called on local side saddle friends to have a number of saddles on loan for the weekend. (She has very generous friends…) All the saddles that were brought to the clinic had to be vetted prior to being ridden. Here Peter Swayles, an experienced saddle maker, is checking over all the saddles to ensure they are safe enough to be used. When saddles get to be 100 years old or more, sometimes things are not as strong as they used to be… Then the horses and the saddles and the riders all had to be matched up. Lee warned everyone that Friday morning would be a shambles, but even with all this going on, I didn’t think it went badly at all.

While both English and Western side saddles were used in the clinic, our primary interest was in seeing the Western ones, of course. We have been learning more about how side saddles need to work for the rider, but seeing things in real life is always a good thing. 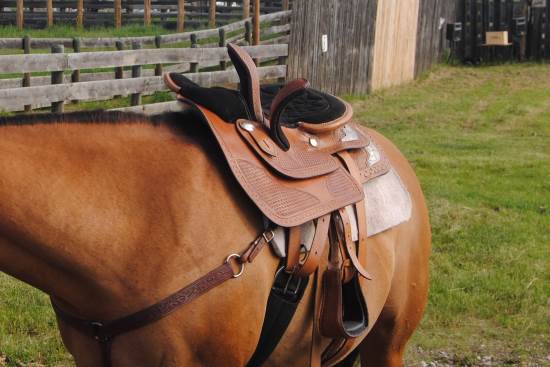 We had a really good example of how not to build a Western side saddle in this one. It was ridden twice, once each by two sisters, because it fitted their wide horses decently, but it was basically unrideable for them due to the design. (One of the ladies who rode it told me how glad she was that she had the chance to ride it. Now she knew what not to buy!!) There were no makers mark on this saddle, so we don’t know where it was made or by whom. 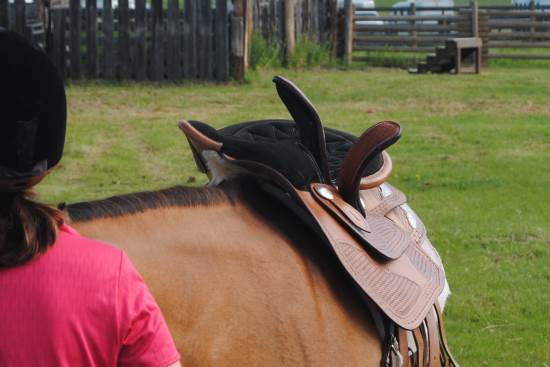 Things to notice in a bad side saddle.  First, the cantle is unlevel, sloped towards the left. The difficulty in riding side saddle is keeping balanced when both legs are on one side, so having a saddle that already slants you towards that side is not a good thing…

And you can see the result. When the saddle was ridden, it kept sliding left. As often as the riders pulled it back right, it kept going left. And this was totally consistent all through the lesson.

Another thing that was very obvious was how the stirrup position affected the rider. Ideally, it would be right under the leaping head. When positioned that way, the rider’s left leg is vertical, as it is on the English saddle pictured above. But when positioned too far back, as it is on our “bad saddle” example, the rider has to be reaching back to get into it. It isn’t the rider putting the stirrup in the wrong position here. It is the stirrup position causing the rider to put her foot back and you can see that the resulting foot position means a less stable position for the rider.

So with all this information, it should be easy to tell which saddles will ride well and which won’t. Right? Wrong… While some things are easy to see, others aren’t so obvious. 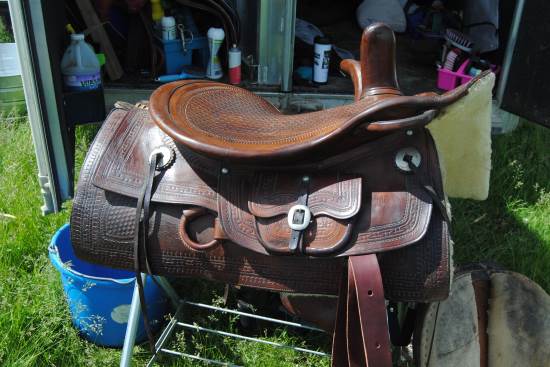 Here is a gorgeous antique side saddle. 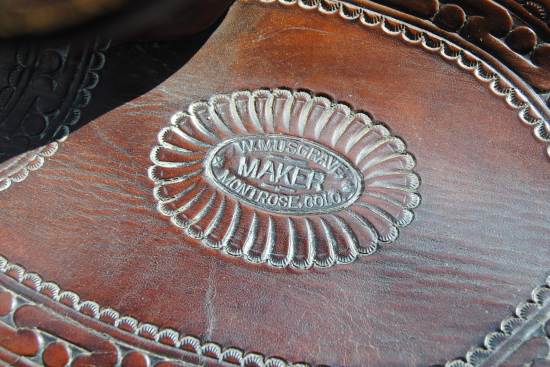 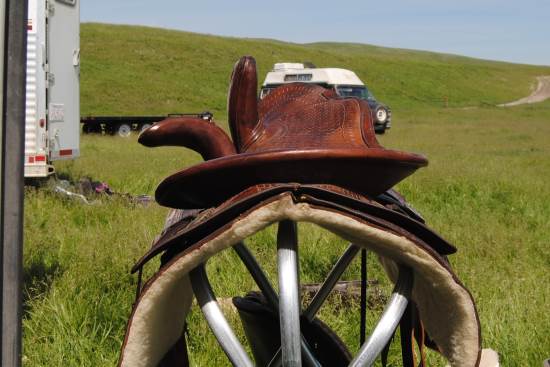 But look how the seat slopes left! It is obviously going to be very difficult to ride right? Wrong. Apparently it rides beautifully balanced. 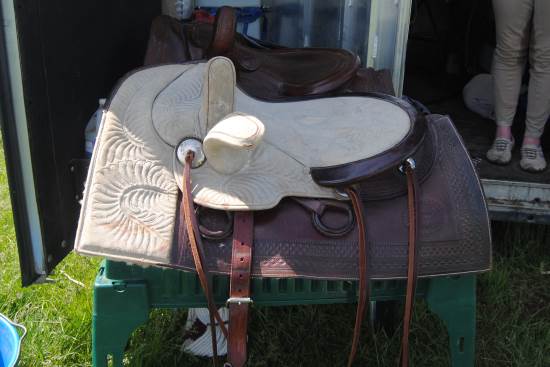 And here is a gorgeous Goodknight saddle of a similar age. Look at how beautifully you can still see all the stitching! The reason you can see it all so well (besides the fact that it has been well cared for) is that is hasn’t been ridden much. And the reason it hasn’t been ridden much is because it doesn’t ride well. So despite the fact that these two saddles look very similar, they don’t ride that way. And it seems that no one really can figure out why. Now that makes it tough to reproduce, both for the tree maker and the saddle maker.

So that is some of what we saw saddle wise. Sunday afternoon, everyone came out in their habits, English and Western, and paraded around the Bar U site. Just for the fun of it, here’s some pictures of some of the riders in their finery. 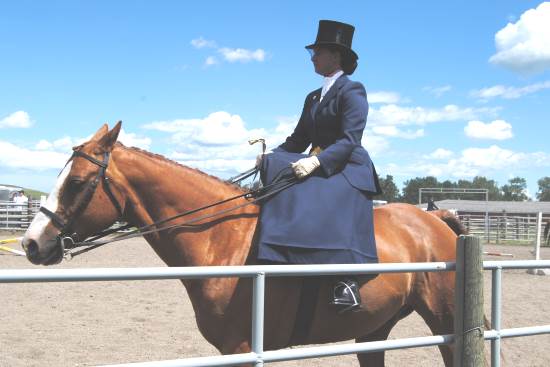 With English habits, either top hats or bowler hats may be worn. I’m sure there are rules as to which you wear when, but I don’t know them. Veils are also the thing to wear although apparently there is the question of how to drink your champagne when on a hunt. Do you lift your veil, or drink through it? 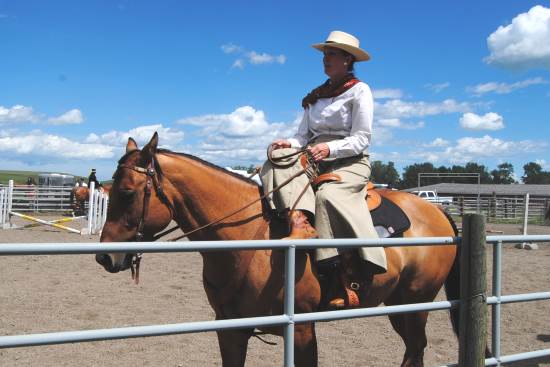 Here is a western habit with a split skirt, so you can still see the pommels. 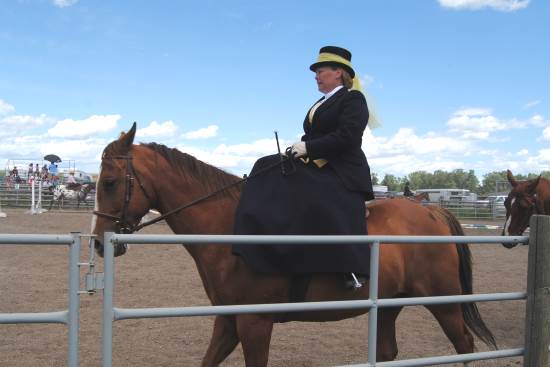 Another English habit. These are made out of wool, and I can’t imagine how hot the riders must have been wearing them since it was a very warm day. 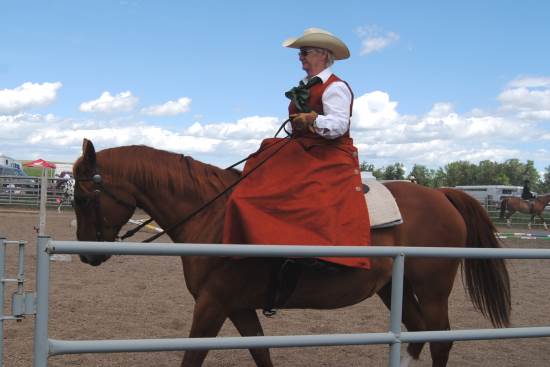 Here's a western habit with the apron rather than the split skirt. Ladies originally rode with normal full skirts.  Later on, however, they took to wearing breeches or something like that under an apron which was sewn to look like a full skirt but really only covered the rider’s legs and other bits that mattered. It was apparently a safety issue so the skirt was not likely to catch on the pommels if the rider came off. 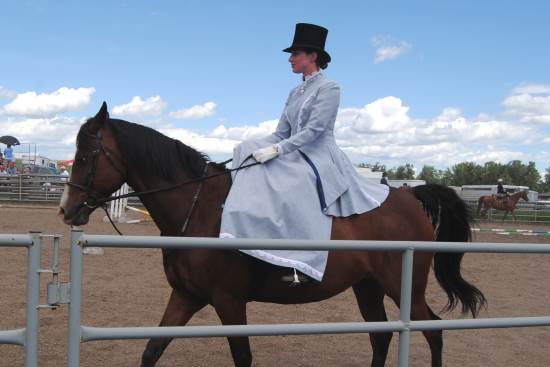 A more colourful English habit. This lady took a jumping lesson after the parade and it was quite fun to see her going over the jumps with her habit flying… 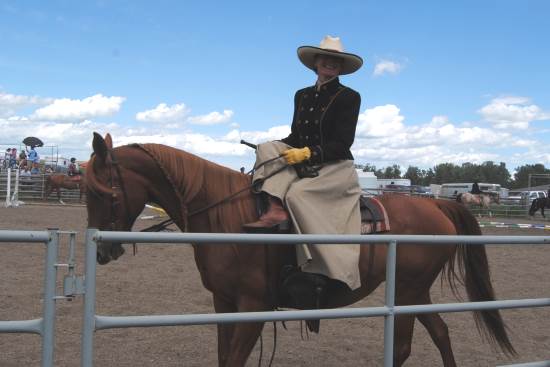 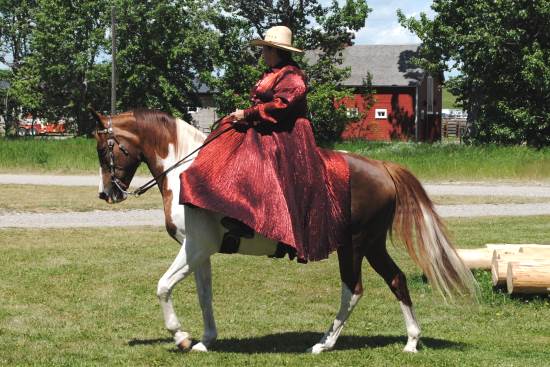 This gorgeous red habit showed up best in the picture I took later on as the riders rode around the grounds of the Bar U.  No wonder some people get interested in side saddle riding when they can look like this! 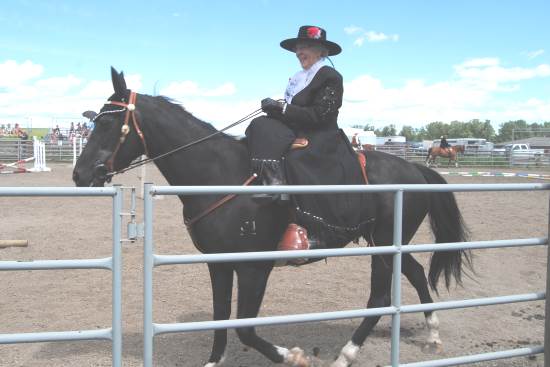 This rider and horse are well into the century club. She is 84. Her Tennessee Walker is 28. This year she decided not to take part in the classes any more as she is starting to find them strenuous, but she really wanted to be part of the parade. And they definitely added to it! One other rider was in her seventies and at least one more was in her sixties, so side saddle isn’t just for the young in body. 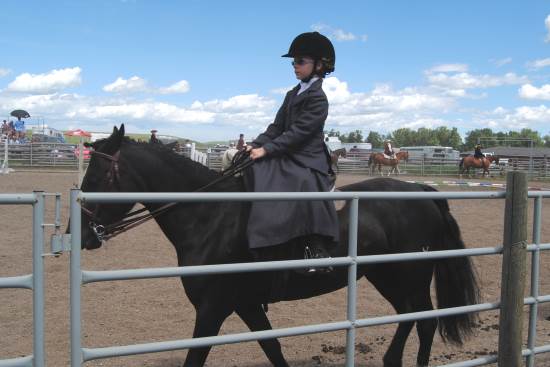 At age ten, this was the youngest clinic participant. She was already a rider with some experience side saddle, and jumping was no issue at all for her or her pony. With youngsters like this coming up, side saddle will continue on to the future. 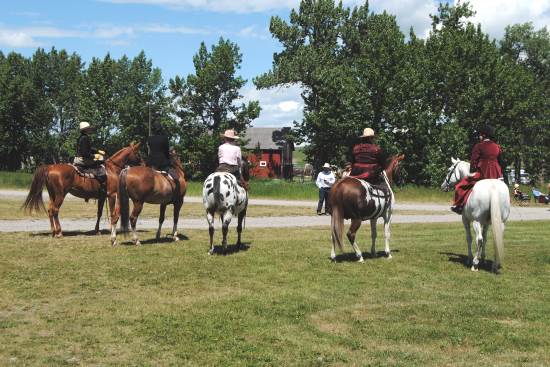 A final picture of the ladies posing for pictures taken by the tourists who came out to see them at the Bar U that day. From behind, the riders look like any other sitting up straight and tall – so long as you discount the habits and the missing right legs.

Building side saddle trees is an ongoing learning experience for us. We know they will never be a large proportion of our business, but they are interesting and a challenge, so we’ll keep working on the design with Lee to make the most functional side saddle tree we can…

Posted by Angelina on Jan 6th, 2015
I jut found this post! I wish I had been there. I have a R.T. Frazier sidesaddle that looks a lot like the one in white doe skin, it did not ride well either and my saddler said it originally had a pad on the upright horn. He was right! After adding the pad it rides great. I could send you pictures.
Posted by L. Rivlin on Apr 9th, 2015
In English habit, top hats are worn by married women only--and only after 12pm for shows. On a hunt the top hat may be worn from the start, even if it is early in the morning.

I hope that clears things up as I am sure you must have lost much sleep puzzling over that one!