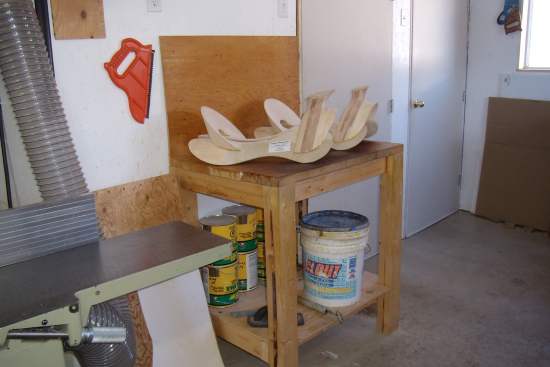 One of the more boring but very useful items in our shop is the bench we use to varnish the trees.  It is there day after day, just sitting - lonely - in its special spot - waiting to be used... 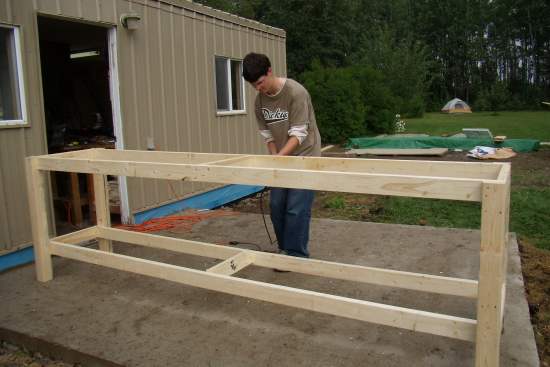 In 2007, when we expanded the shop to house our dust collection system, we needed more bench space.  That weekend we had most of my family out to help do the shop expansion, and Rod had four different sections of the project all figured out for different people.  He asked our nephew David, who was then 16, to build the benches.  He gave him a general plan, showed him the lumber designated for them, and let him build. 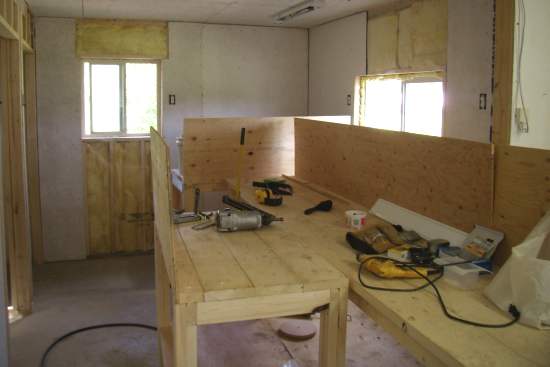 And build them he did!  Four benches, solid, even, dead level.  By the way, David is now Dave and well over half way through a degree in mechanical engineering.  You know, the kind of engineers that design and build things so they work?  Yeah, Rod had the right man for the job all right, because they are still solid, even and dead level. 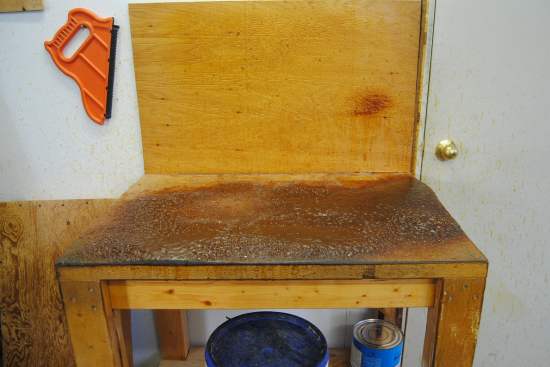 Well, dead level as they sit on the floor that is.  The top of the varnish bench -  let's just say it now has "character"...  Why does it look so bizarre?  Well, there's a reason for all that character. 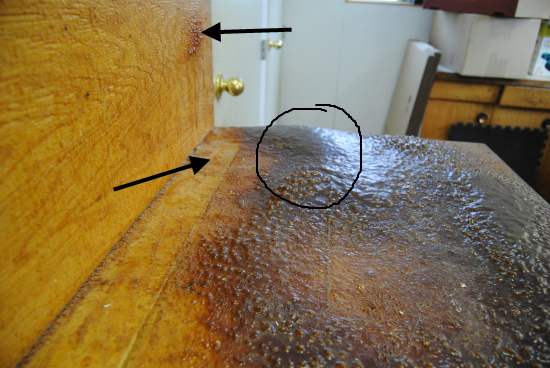 So what's with the splat on the back board, and that huge mound in front of a bare spot? 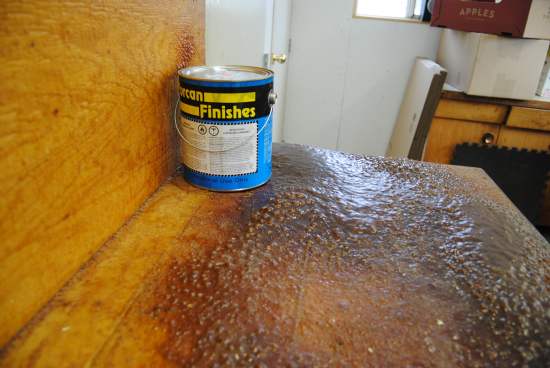 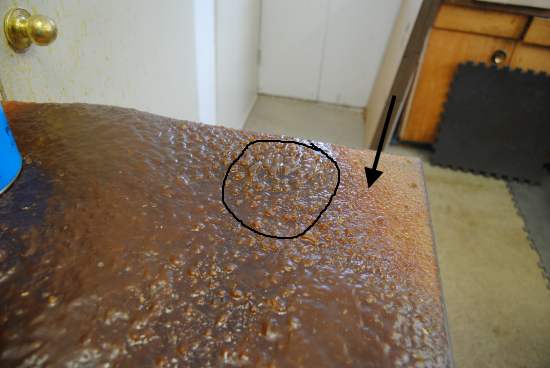 What about that lumpy, bumpy spot with a (relatively) clear spot behind it? 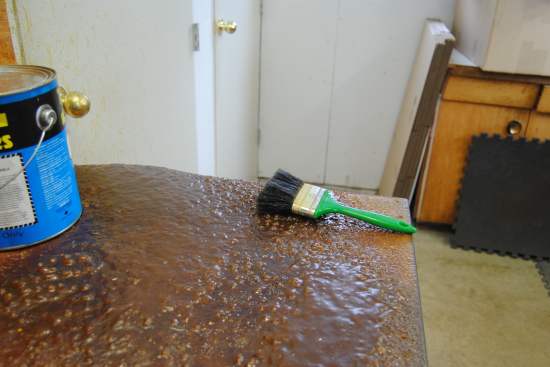 Well, that's where I set the brush down when I move the tree around as I varnish it, or when I move it off and get another tree to varnish. 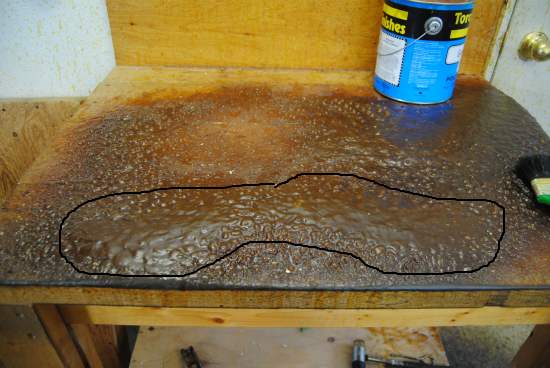 And how about this long, weird shaped ridge toward the front of the bench? 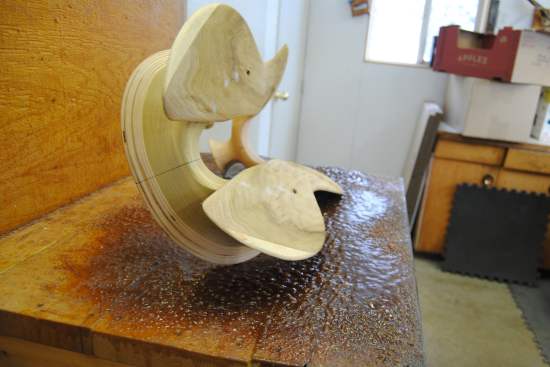 That's where I varnish first one bar... 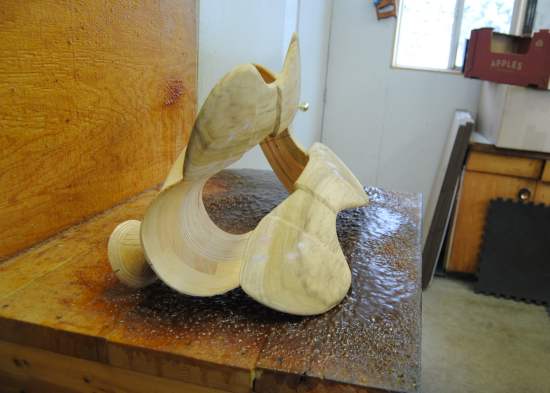 and then the other one. 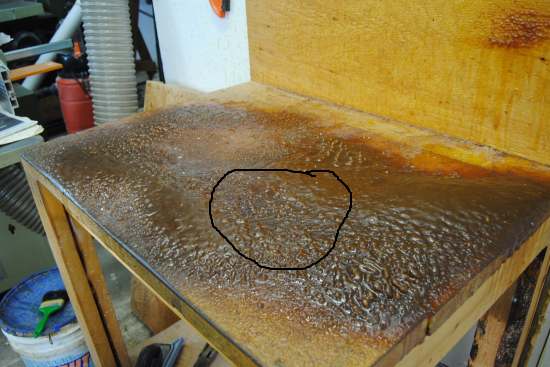 And this section in the middle that isn't as high but still has a fair collection of varnish in hills and valleys?

That's the section under where I varnish the fork and cantle, so that is 5 years worth of drips from doing that. 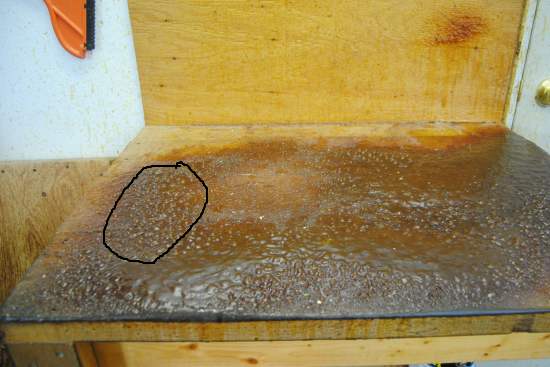 And the lumpy area over on the left? 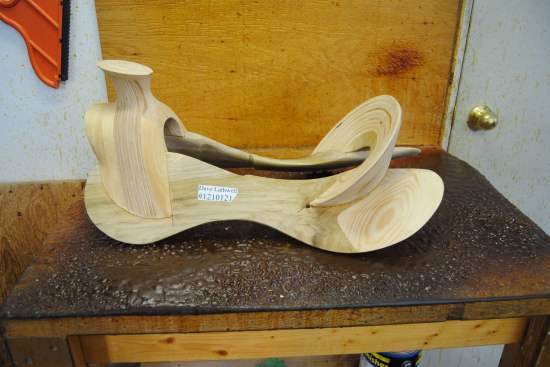 That is where the finishing touches get put on the fork, cantle and horn.  And you know what?  That process drips too!

So looking at the varnish bench can tell you a lot about the methodical process I use to ensure the trees are varnished consistently and no spots get missed.  Besides, the character is "interesting" to have in the shop.

But this week I had a rawhided tree almost slide off the table when it was wet and slippery, so... 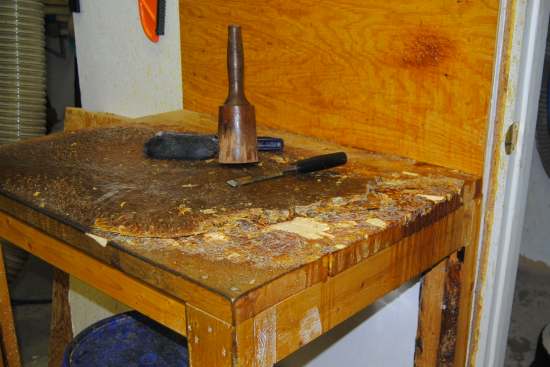 it's gotta go!  Back to the flat, even, level bench David built in the first place.  (But with the time it is taking to get this stuff off, I'll probably wait another 5 years to do it again!!)