Posted by RodandDenise on December 8, 2011 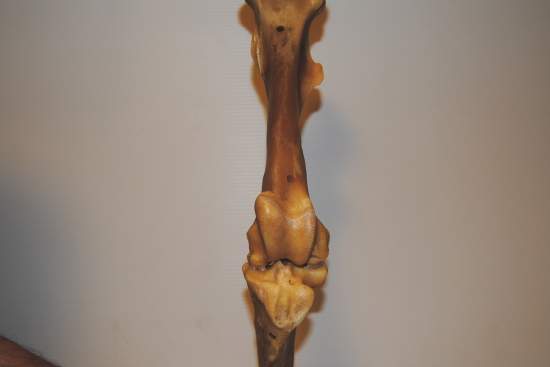 In the first post about the bones of the hind limb, I talked about some interesting lumps at the top of the femur.  Now let’s look at the bottom.  This is a front view of the left femur and tibia, so we are looking at the front of the stifle joint.  The outside of the horse is to our right and the connection to the pelvis is to our left. 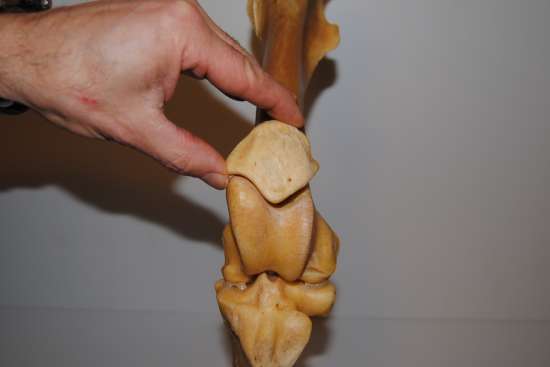 At the bottom of the femur are two lumps with a groove in between them.  This called the trochlea with medial and lateral ridges.  The groove is where the knee cap, or patella, rides.  The ridge on the inside of the leg (the medial side) is larger than the one on the outside (the lateral side).  This is important.  Really… 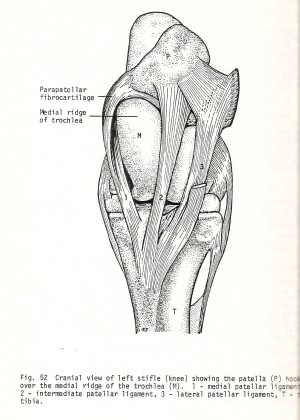 While humans have one ligament from the kneecap down (which is what the doctor hits with the rubber hammer to test your reflexes) a horse has three – one down the middle and one down the outside of each of the trochlear ridges.  (This drawing is from some old class notes handed out by probably the best prof I ever had in university – Dr. Doug Leach, an anatomy prof at the Western College of Veterinary Medicine in Saskatoon Saskatchewan in the 1980’s.)

This set up is part of why a horse can sleep standing up, and why they rest with one hind leg toe-down so often.  When they want to rest their leg, they put weight on that hind leg and extend (straighten) it, contracting their quadriceps muscles to do so.  This pulls the patella up above the trochlea.  Next, they pull the patella to the inside so it sits above the medial ridge of the trochlea with one of the patellar ligaments on each side of it.  Then they can relax their muscles and the patella is hooked in behind that ridge.  It stays there with only the ligaments holding the joint solid.  (There is extra cartilage attached to the patella to let help it fit into place like this.)  To allow the stifle to move again, they have to shift their weight to the other hind leg, pull up and laterally on the patella to “unhook” it, and they are ready to go. 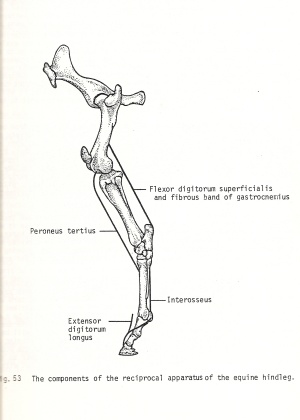 OK.  So that holds the stifle solid, but why doesn’t the rest of the leg collapse?  God had a plan for that too.  Some of the muscles of the leg have mainly tendinous material in them.  These muscles (see another of Dr. Leach’s diagrams above) attach above the stifle joint and below the tibia.  At the front they join to the cannon bone.  At the back they join to the calcaneus, one of the major bones of the hock, so the back part of the reciprocal apparatus forms part of the Achilles tendon of the horse.  With these very strong, non-elastic bands set up in this way, when the hock bends, so does the stifle.  When the stifle straightens, so does the hock.  While it would be so much easier to work on the back feet if the stifle flexed and the hock extended, that just cannot happen.  They both have to bend in the same way at the same time unless something major (life threatening) has happened.

There are similar bands in the bottom of the leg, and with the fetlock built the way it is, the end result is that if the stifle is locked in extension by the patella, then the whole leg is locked so it can’t flex.  And since the weight of the horse is taken by ligaments and tendons, the muscles can totally relax while the horse stays upright.  Then they can rest the other leg with the toe on the ground and go to sleep.   (There are comparable things in the front leg to prevent them from collapsing too.)

So what does all of this have to do with saddles and trees and how they work on horses?  Nothing really that I know of at this point.  I just find it fascinating to see how God created different types of animals and made them to work in different ways.  Cattle have three patellar ligaments too, but they don’t have the “stay apparatus” that would let them sleep standing up, so they lie down to sleep.  (Rod says I have to mention that this is just one of the many reasons that "cow tipping" is a ridiculous urban myth.)  And there are lots of other things that vary between species, not just in the anatomy but in how the very similar looking anatomy actually functions.

Next up – pivot points and how the hind leg moves.  It ain’t as simple as you might think!!