Reason #9 to order a hand made tree - Detailed record keeping 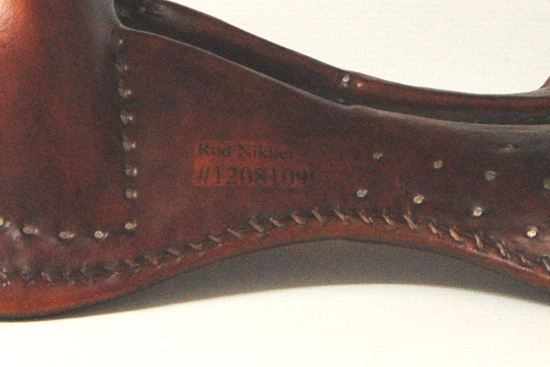 Continuing on in our Good Reasons to Order a Hand Made Tree series, we come to #9 - Detailed Record Keeping.  We can't speak for what records other hand made tree makers keep, but we take a lot of measurements and keep documentation on them all.  To do this, we start by giving every tree its own serial number.  We put the saddle maker's name, the serial number and the saddle customer's name (if the saddle maker gives it to us) on a tag under the rawhide.  This identifies the tree permanently.  No one is going to remove that tag without pretty much wrecking the tree.  Since Rod is going to build another saddle this winter "for fun", this is the bar tag off the tree he built for us.

Why do we do this?

Sometimes we get a call from a saddle maker saying, "You know that tree I ordered back in 2005?  I don't really remember what I ordered but the customer really likes it and wants one for his wife now.  Can I get another one just like it?"  No problem.  So long as we can figure out which tree he is talking about, we can tell him the specs.

Occasionally we get a call asking "Can you tell me the specs on the tree in this saddle I just bought?  It is supposed to have one of your trees in it."  If they can give us some basic information - the saddle maker's name, the approximate time the saddle was made, a few measurements if needed, and maybe who the saddle was made for - we can usually figure out what tree it was and then we can give them the "official" specs.  Sometimes we have been able to figure it out with a lot less than that to go on. 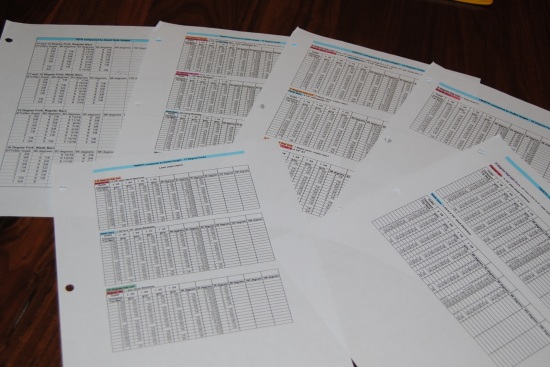 And we also use the measurements for ourselves to go back and figure out all sorts of things about how trees go together and how they work.  For example, this past summer I redid my charts that compare hand hole and gullet height.  Bar angle affects the measurement from the table to the gullet lip (gullet height) and from the table to the top of the hand hole (hand hole height).  The flatter the angle, the lower the measurements, if the fork is marked out the same, and vice versa.  But how much lower?  And now that we have added more bar angles to our repertoire (Rod finished our first 87 degree tree today) I wanted to know what difference it made if the bars were at 90 or 93 or 95 or 98 degrees.  By going back in our database, looking at our actual measurements (which, as anyone who does experimental science understands, are not always totally the same) I could figure out how much difference there was between the angles for each of the fork angles, top cut angles, bar types, etc. etc.  The result is in the picture above.  (The final "chart" isn't A chart.  It is a series of charts...)

How do we do this? 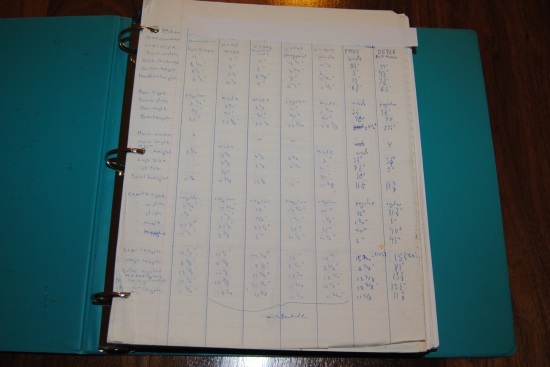 We started keeping track of actual measurements from the first tree Rod built in 1996.  OK, he missed measuring the first four in the wood, but he got them measured in the rawhide. Close enough to start with!  Even though everything is on computer now, I still keep the old recording charts in a binder in the house - just in case.  It is almost 1 1/2" thick now...

Over the years, you can see changes in what we recorded, and our technology level as well.  By 1997, we had photocopied recording sheets, not hand made ones every time.  But they were still hand written.  By 1999, we had added more things to measure, and had moved up to a typewritten original.  High tech!!

In 2000, we got a computer!  And that is when I started measuring in the rawhide as well as Rod measuring in the wood.  His is the pen.  Mine are the tiny little numbers in pencil beside his that you probably can't see in the tiny picture.  Things stayed the same for quite a while then, but in 2005 we figured out that measuring more stuff might be helpful, so the list got longer...

In 2009, it got added to again, and this past summer I did up yet another form with even more stuff to record. 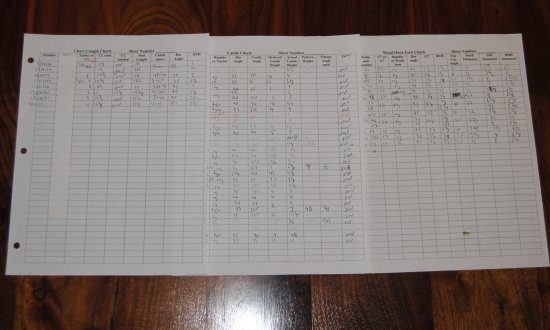 And then there are the other charts I have asked Rod to fill out.  The ones that double check to make sure the charts I use to mark out everything are right.  Amazing that after pushing 17 years doing this, we still build trees with different combinations of specs than we have ever made before.  And there are still holes in some of my charts - which have to be filled in, of course!! 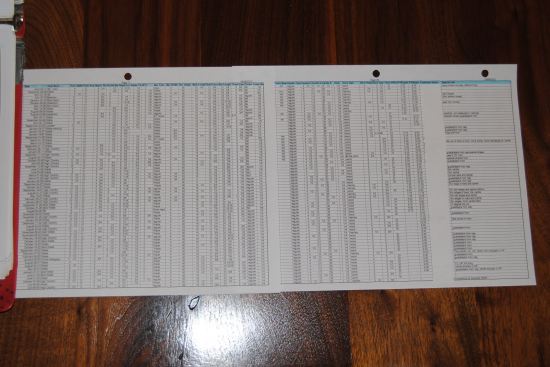 Hey, did you notice the binder change color a couple of pictures back?  That is because the last charts are in the "red binder" that we keep out in the shop (as opposed to a different "green binder" with my marking out charts in it).  So when you call Rod and ask about specs on a tree (unless it is one built since I last printed out the database, in which case he has to shuffle through pages of recording charts) this is what he looks up to answer your questions.  One line per tree, going over two pages with tiny little print, giving the most important of the measurements.  It doesn't have them all, because there are now 49 pieces of data I enter for every tree we build, plus special requests and DL numbers when given, and I can't get that all onto two pages.  But the printout has the most important stuff.  (As to what we record and why, that will have to be another post.  Maybe two?)

So, are we neurotic?  Nah.  Rod is perfectly normal...

Posted by D Martin on Nov 23rd, 2012
"So, are we neurotic? Nah. Rod is perfectly normal..."
Hilarious! How else would you both be doing what you are doing so well?
Posted by RodandDenise on Nov 23rd, 2012
Yeah, he deals with me really well. I am blessed.