The effect of the rider - Part one 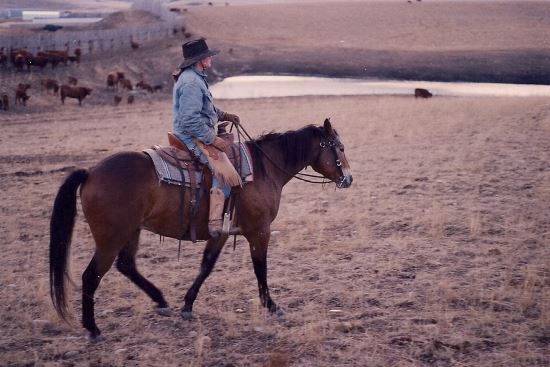 Daring to walk into a lion’s den here… When discussing “big picture saddle fit”, we have to look at more than just the tree and the saddle. There are other factors that affect the pressures on the horse. (We give a run down on these on our Troubleshooting Saddle Fit page.) One of the main ones that can be touchy to discuss is the effect of the rider. But here goes…

It is the rider who decides almost everything about how the horse is ridden. (The only thing the horse decides is how long the rider is allowed to remain up there and, if the rider is skilled and the horse is not all that athletic, sometimes the horse can’t even make that decision.) What type of padding and other tack are used, where the saddle is positioned and held, what kind of saddle, etc. etc. are all decided by the rider. But that isn’t what I am talking about here. What I want to discuss is the physical effect the rider has on the horse just by riding.

Any time a person sits on a horse, they cause pressure. That’s a fact of life, having something to do with scientific basics - like gravity. How much pressure, when and where depends on the rider. Obviously, the heavier the rider, the higher the total pressure if they are just sitting there. But what happens when the horse moves? There have been a few studies done on this, and the results actually correlate well with accepted knowledge as well as basic common sense.

Research on effect of gait on pressure

One of the earliest of the studies which have tried to evaluate the effect of the rider on the horse was done in Vienna (1). It tested twelve horses ridden by their usual riders in their usual dressage saddles. These riders “were all experienced and able to perform at a high level”. So these were people riding horses they were used to (and therefore presumably comfortable) riding and experienced in a discipline which seeks to have the rider as centered and quiet on the horse as possible- which is a good idea when trying to get reliable data. They did their testing in a flat arena with good footing and used a pressure mat under the saddle to record actual pressures.

They zeroed the pad after girthing up so they were only recording the pressure of the saddle or saddle/rider combination, not the pressure from the saddle being tightened on the horse’s back. They measured pressures of the saddle without the rider at walk and trot, and then pressures with the rider at walk, sitting trot and canter. They added the readings from all 224 sensors together and compared the maximum overall force – the highest combined pressure from one reading - from all the tests. With riders up, they divided the maximum overall force by the weight of the rider in kg to be able to compare sensibly. So while the numbers may look high, it is really because of how they crunched the data. The real information comes from comparing the numbers, not the numbers themselves.

“I could have told you that…”

To anyone who has ever ridden, this just makes sense. When you walk, you just sit there. No bouncing, for lack of a better term. No times in the stride when you feel the saddle harder than other times. So pressure at a walk is what you weigh. (To the science geeks out there, I know mass and weight are not synonymous, but for practical purposes here on earth with biological systems, I’d say they are close enough…)

But at the trot, there are times when the horse is coming up and the rider is coming down and they connect harder. And there are times when the rider is going up and the horse is going down and there is less contact. However, on average the maximum pressure is about double at a trot than the walk. And at a lope it is higher yet.

But it is fascinating to see the numbers. The trot is actually double the walk but the lope isn’t triple. Just 2 ¼ to 2 ½ times the walk. Interesting…

Although they don’t discuss it in the paper, the variation between people is obvious from the data. The standard deviation is 10% of the mean even at a walk, while at a trot it is approaching 20%. That's a lot of variation between riders. This may in part be due to the horse (more on that later) but it has to include differences between the people as well. Some people just don’t sit as quietly as others – and we all know that.

There have been other studies done as well (2, 3, 4) looking at sitting versus posting the trot and how that affects the horse. This has been tested in a few different ways, but the result is that since there is only one higher pressure contact between rider and saddle in the rising trot, the overall pressures on the horse’s back, if you added them all up, is lower when posting than when sitting. Again, these studies were done primarily using experienced riders so we expect them to have had a good seat whether in the rising or the sitting trot.

But don’t forget the horse in this equation

One of the studies (2) used multiple riders but only two horses. And lo and behold, the forces were consistently higher on one horse than the other. Again, anyone who has ever ridden more than one horse can tell you that some horses are rougher than others. But the take home message is that if your horse has rougher gaits, he we will have higher pressures under his saddle than if he had smoother gaits. We feel the difference in pressures too!

So how does this apply to saddle fit?

Well, let’s get back to the idea of the bell curve. Saddle fit isn’t a yes/no thing, especially when it comes to western saddles. Remember that the philosophy of western saddles is to have lots of surface area so that even if all of it isn’t in contact with the horse at any one time (and it never is) there is still enough surface area to distribute the weight of the rider adequately – so long as there are no high pressure spots (nothing that pokes the horse). There will be an ideal fit in the center of the bell curve, but as you get away from that, the saddle will still be usable until you hit the point that there is so little surface area in contact that the pressures underneath those areas get too high.

So using this concept of the bell curve, the same saddle/horse combination may be OK for one rider and not another if the amount the shape actually matches is towards one or the other end of the curve. The saddle doesn’t change shape, but the pressure point may be exceeded by a heavier rider and not a lighter one, or it might be OK for a quiet rider but not one who bounces around a lot. If the horse has rough gaits, the shape of the bell curve will be narrower. The saddle for that horse will need to fit more closely to the ideal while the horse who just floats along has more range in the shapes of saddles that will work on him.

And the practical application is…

The more you bounce, the higher the pressure on your horse. Surprise, surprise… This just makes sense, but it is interesting how much variation there is between riders as shown by the research. I read a lot of discussion about how heavy a rider a horse can carry, but not much is said about how the rider sits. What the variation between riders shows us is that a heavier rider who stays with their horse may have less impact on their horse than a lighter rider who bounces all over the place. So the bottom line is the more quietly you sit - the better your seat, the more in sync with the horse you are – the lower the pressures under your saddle will be. Learning to ride well at all gaits will benefit your horse, no matter how much you weigh.

There's still more to talk about in another post...

(3) A comparison of forces acting on the horse’s back and the stability of the rider’s seat in different positions at the trot C. Peham, A.B. Kotschwar, B. Borkenhagen, S. Kuhnke, J. Molsner, A. Baltacis, The Veterinary Journal 184 (2010) 56-59

Posted by Diane Kaser on Jul 24th, 2016
Good post. In dressage at least speaking from what I know well enough, we are taught the following seat. Your lower body moves with the hind legs. You can feel the horse move your seat to the right when the left leg comes under or just before. Then it will move it to the left. At the walk of course. Your lower body belongs to the back part of the horse and your upper body to the front. We do following elbows (hands) as well. Done properly there is no big clash with the horse's movement. The Western Dressage people do this as well. If the rider doesn't have a supple back and know how to follow the trot movement while sitting, yeah, bouncing. Just my humble opinion of course. I'm still learning about this horse stuff and will never ever know it all.