Posted by RodandDenise on October 4, 2012 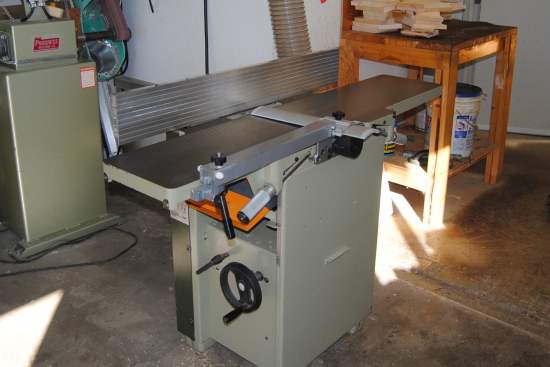 Another major piece of machinery which gets lots of use in our shop is our combination jointer/planer machine.  I (Denise) actually use it more than Rod does since a main part of my job is taking the rough lumber and turning it into various types of laminated chunks of wood.  So we need something to smooth first one side of the wood, which is called jointing if you are this side of the Atlantic and surfacing if you are on the other side of the Atlantic.  But if you just smooth both sides, you may end up with a smooth, wedge shaped piece of wood.  So you need to get them smooth and an even thickness, which is called planing or thicknessing, depending on where you live.  We need something fairly wide for some parts of the job and to get both a jointer and a planer that are 12" wide we would need a bigger shop since they are industrial sized machines.  So we have a combination machine which has worked well for us instead. 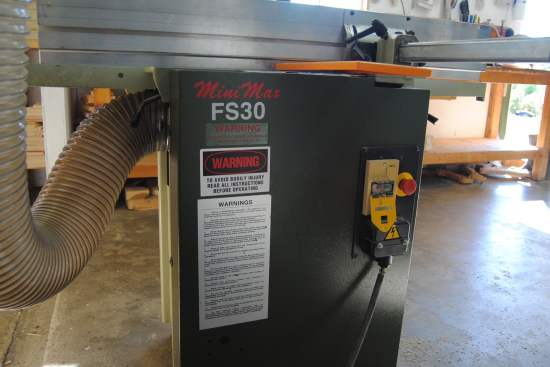 Ours is a Mini Max FS 30, which is made in Italy.  (We have two booklets which came with it.  One calls it a Surfacer/Planer and one calls it a Surfacer/Thicknesser, so even they can't keep their terms straight...)  It runs on 220 power and is pretty straightforward to use - so long as you remember that sharp things that cut wood can also cut people. 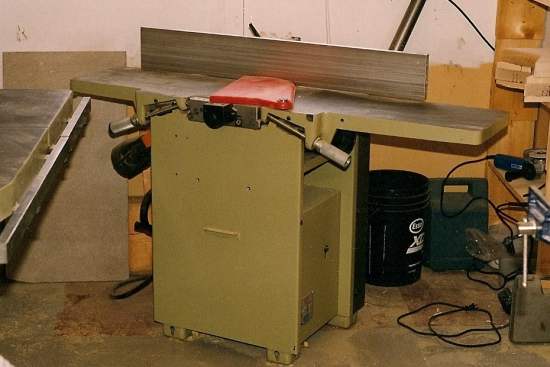 Here's a picture of it brand new in 1996.  We've made a few modifications to it over the years.  The first was changing the type of guard over the blade.  With the original, as you pushed the wood over the blade (from right to left as you look at the picture) the wood shoved that orange guard out of the way, but it also exposed the whole blade even if you were just surfacing a narrow piece of wood.  It also was made of plastic and it broke fairly quickly. 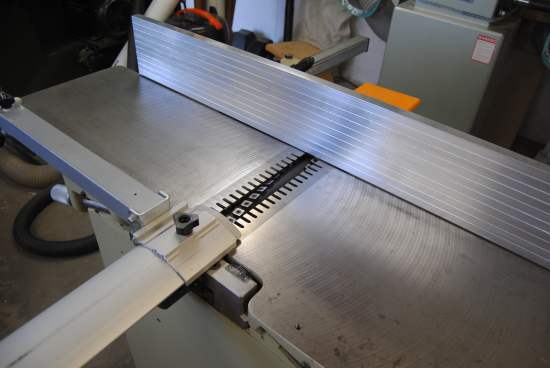 So Rod went with this guard.  With it, you can set how much blade is exposed depending on the width of the wood you are surfacing, but the disadvantage is that there is moving blade exposed when the wood isn't covering it.  And since the guard is all metal, it has survived the past 16 years.

This picture also shows the other major modification we've made to this machine within the last year.  We replaced the straight blade cutter head with a Shelix head.  I'll have to tell you more about why another time. 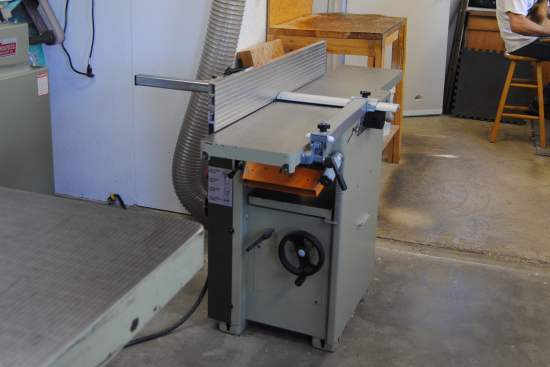 The fence at the back is movable so when doing narrow wood, I can use the back, the middle or the front of the blade depending on where I set the fence.  This helps to use the blades more evenly across their width.  The fence also tilts so you can set it for different angles if you wanted.  I do edge wood for laminating side to side, but that is all at 90 degrees so we have never used the tilt feature. 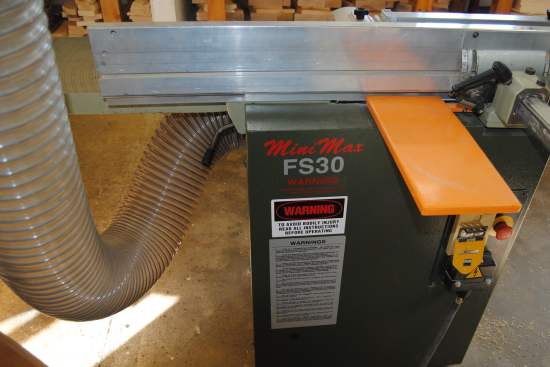 The original dust collection attachments that came with the machine were built for 4" piping.  With our larger cyclone system, we have 6" collecting tube, so we had to make our own collection attachments.  When surfacing, the chips go underneath the table where the attachment is held in place with a couple of large, rare earth magnets from Lee Valley.  Easy to attach and easy to remove.  For good dust collection, it is always best if the piping is solid and smooth walled, but since we have to move the end when we change the machine around, we needed to use flex tubing for a short distance at the beginning. 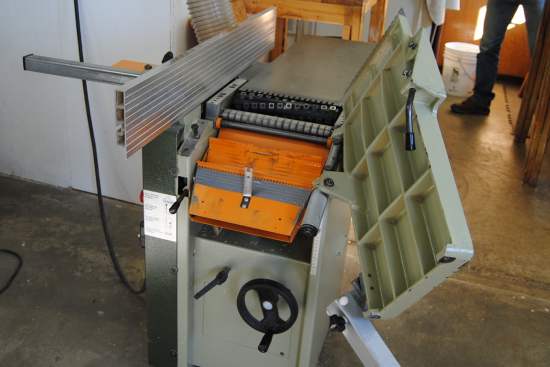 To change from the jointer/surfacer to the planer/thicknesser, the tables are literally turned upside down.  Here the first one is flipped over.  (You get a better look at the Shelix blade here too.) 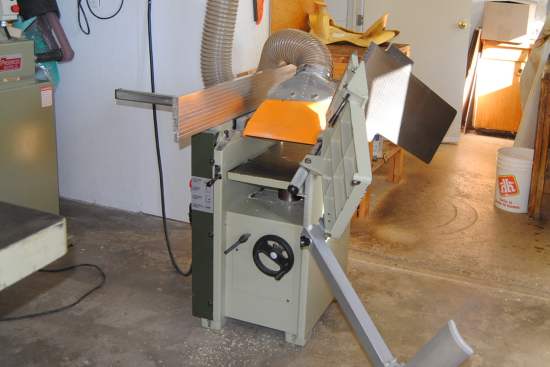 Now both tables are flipped out of the way and the built in orange guard is flipped over the blade.  This acts not just as a guard but it also collects the dust and chips as they first come off the blade, heading up.  Our home made dust collection unit goes over its open end and everything gets sucked up the pipe. 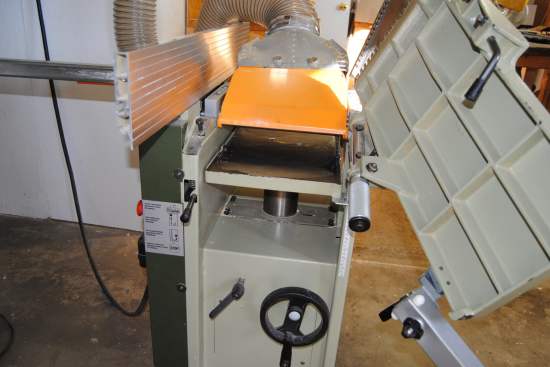 When planing, you feed the wood from the opposite side of the machine than when surfacing, which makes sense because the blade spins the same direction but you are using it from underneath rather than on top.  The lever on the left engages the feed rollers so they only work when you are planing, reducing wear on the parts.  The wheel raises and lowers the table.  We have over 8" of room with this machine if we ever want it. 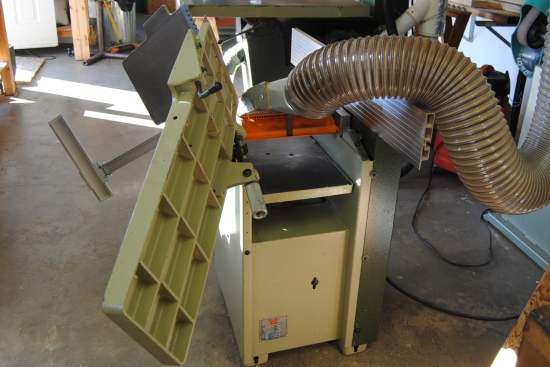 Thicknessing/planing is the only job in the shop that Rod and I do together.  With the set up of this machine - tables on one side, fence on the other - it is awkward to plane by yourself, though it can be done.  Since I usually do up a batch of wood at one time, I get it all cut and surfaced and ready to go.  Then Rod helps me for a bit to get it thicknessed.  When we're done, we flip the tables back up, and I take over again doing the edging, etc.

I'm sure that it would take less set up time for surfacing and edging on occasion if the tables were solid rather than mobile.  But for us with our limited space, this one machine has worked out really well.

Posted by Colin Mansfield on Jan 1st, 2015
Thanks for taking the trouble to share your ideas. I'm on the other side of the pond in England, and I have a similar machine that I'm about to sort out extraction for. You've helped clarify a great deal for me, so a big thank you.

Colin
Posted by RodandDenise on Jan 1st, 2015
Glad we could be of help!
« Previous
Next »