Home > Saddle Tree Blog - From Shop and Desk > Four Wades - or are they?

Four Wades - or are they? 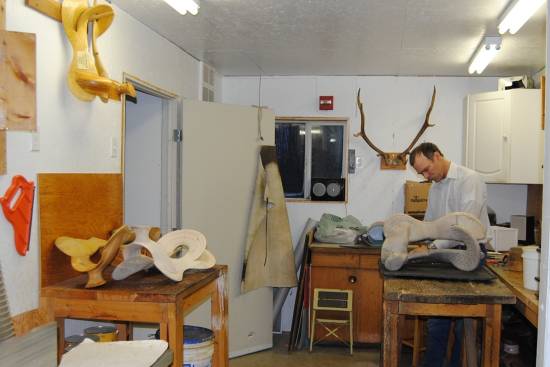 This was Rod about 5 pm last Saturday, finishing up rawhiding the first of four Wade trees.  The one on the wall has all its coats of varnish done.  The two on the table still need two and three coats of varnish respectively.  Of these trees, two are going to Idaho (different makers), one to California and one is staying in Alberta.  Wades are still the number one tree style that we build.  But wait...  Look at that one hanging on the wall again.   Is it really a Wade?

What makes a Wade, a Wade?

There is a lot of discussion about Wade saddles.  They sure haven’t slacked off in popularity at all over the last almost 16 years that we have been building trees.  In fact, they are reaching a far larger market than ever before.  It used to be working cowboys in the west who rode a Wade saddle because of the advantages for roping.  Now it seems that anybody and everybody wants to be riding a Wade.  So if you check the internet, you can find metal horn swell fork saddles that are labeled “Wade”.  Anything with a slick fork, whether wood or metal horn, seems to be called a “Wade” too.  And did you know that Wade saddles are more comfortable than other saddles?  And they fit a horse better too!!!  I also read on the internet that wolves are an endangered species, so maybe we should allow them to eat more than the 2 cows, 3 yearlings and 10 calves that they took off our local community pasture this year...  So, if you can’t believe all that you see and read on the internet, what makes a Wade, a Wade?

A slick fork widens out all the way down to the bars.  A swell fork goes out and rounds back into the bars.  If any part of the swell is wider than the bottom of the fork where it joins the bars, it is not a Wade.

As discussed on our Basics of Horns page, a wood post horn has a couple of advantages for roping over a metal horn.  First, the gullet doesn’t have to be as thick because you don’t have the length of screws that attach a metal horn to worry about.  On our trees that brings the base of the horn almost an inch closer to the horse’s back with the same amount of clearance at the hand hole.  Second, the larger surface area allows you take less wraps on your horn when you dally to get the same amount of friction.  This is most important with mulehide wrapped horns.

Stock thickness, as explained on our Measuring a Saddle Tree page, is how thick the wood is from the front to the back of the fork.  The original stock thickness on a Wade tree is 5”, which is quite a bit thicker than most other styles of trees.  There are a lot of “modified Wades” now that have different names and different stock thicknesses.  The "Ray Hunt Wade", for example, has a 4 ½” stock, as does the "Lady Wade".  These names were tagged on by the people originally building the saddle for a specific purpose and, like has happened in history with all tree names, when they because popular and others started building the same thing, they used the same name.  People who are strict on the history end of things will say that only a 5” stock tree should be called a Wade.  The others should have other names.  Our choice is to go by “Modified Wade” for other stock thicknesses and then give the stock thickness.  Overall measurements tell you a whole lot more than a name does. 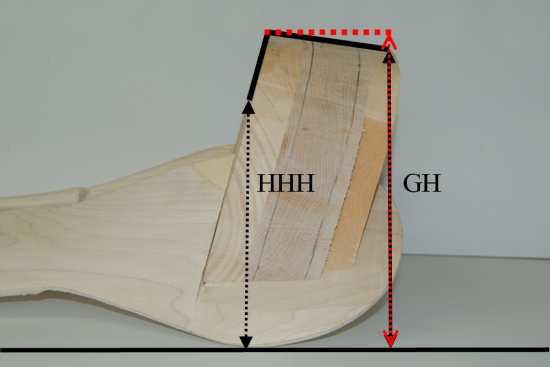 Then there are functional things than change when you get a long lip out front.  To stop the tree from looking too downhill or the gullet lip from hitting the horse when you can drive a train through the hand hole, the top is cut at a higher angle as demonstrated by the red line in the picture above.   This is explained more fully in our Avoiding the Withers – Using Gullet Height and Hand Hole Height page. 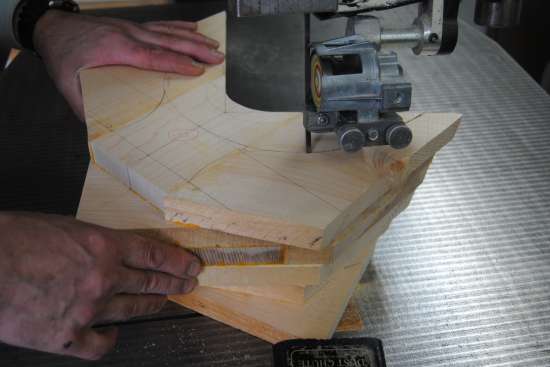 This isn’t something people talk much about, but not all fork styles are cut out with the sides 90 degrees to the back.  That is how swell forks are generally cut out.  Slick forks are cut at an angle, and Wades are cut with even more of an angle.  It is tough to see, but the table on the band saw is tilted to a specific angle so where the blade is following the outline in the picture is the narrowest place after the sides are cut off.  Even though you can’t really point out specifically how this makes a difference after everything is all shaped, this side cut angle changes the look of the fork.  And this is part of what gives a Wade that "Wade look".

Some people who stick closely to history will say that only forks with exactly the original shape of the first one (a pattern taken from that one is still used by some makers) should be called Wades.  Others say that only forks with the certain gullet heights should be called Wades.  And there is a point to being historically accurate for sure.  But fitting different horse types affects the shape of the fork to an extent, and even the original makers changed the original style over a few years.  So we believe that there is some room for modification.  However, the above 5 points are non-negotiable in our minds as to what makes a Wade, a Wade.

What a Wade doesn’t mean.

Just because the fork is a wood post slick fork with 5” stock thickness, a higher top cut angle and a wider side cut angle doesn’t mean it will fit either horse or rider any differently than any other fork style!  How the saddle feels to the rider’s seat is 100% controlled by how the saddle maker constructs the ground seat, and that is completely independent of fork style.  In the same way, all the Factors that Affect Tree Fit are also independent of how the fork is shaped.   Just because some companies tend to make a certain ground seat to go into a saddle with a Wade fork, or they use a bar with a specific outline, rock and twist pattern on a tree with a Wade fork doesn’t mean that ALL Wade fork saddles have the same ground seat or bar style.  The seat on a Wade saddle can be good or bad, depending on the saddle maker.  The fit of a Wade tree can be good or bad, depending on how well the Factors That Affect Fit match the horse.  This is one of the biggest fallacies about Wade trees out there, and we’ll keep telling people as long as we are able that a Wade is ONLY a style of fork.  The rest of the tree is independent of that.

So what about our four “Wades”? 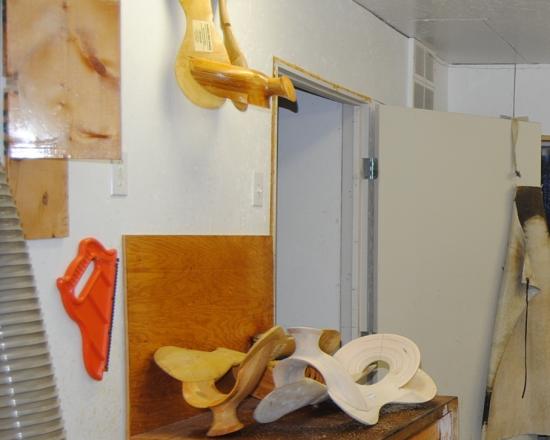 Take a closer look at the one hanging on the wall compared to the ones on the bench below it.  That one doesn’t have 5” of stock.  In fact, it is narrower than almost all of our wood post forks at only 4” of stock.  This tree is a kid’s tree and to balance the look of a smaller seat, horn and cantle, the saddle maker ordered a thinner stock.  So while everything else was done the same as we do a regular Wade, this one would fall into our “Modified Wade” category due to the thinner stock.  And what are we calling it?  Exactly what the customer wants us to…  But not Wade!

This topic often creates some controversy.  Any other opinions?

Posted by Christina Savitsky on Nov 24th, 2011
Doesn't the fork dictate how wide the bars of the saddle need be in the front?
Posted by RodandDenise on Nov 24th, 2011
I hope I am interpreting your question properly. But any way I interpret it, the answer is always no. Are you talking about the depth of the actual bar? How wide side to side the bar itself is? There is a lot of variation between makers in the amount of contact area between fork and bar. Ideally, more is better, but you get some fork styles that cut in much more than others and that will limit the bar contact area. However, if the size of the bar is determined by the contact area with the fork, you have pretty small bars!! And, of course, more surface area is better until you start interferring with the horse.
It is true that most "Wade bar" patterns have a larger outline pattern than a lot of other named bar patterns (which all vary between makers anyway). The original Wade bars must have been wider than what they were commonly using, and most makers now use a larger bar pattern for Wades, but that doesn't have to be so. You can also put the larger bar outine pattern under any fork you want. On our trees, we have two basic outline patterns we use and the Wade pattern is only 1/4" deeper front and back (and the same in the middle) as the regular pattern. The length of bar ahead of the fork cut on Wades is generally also longer than on other bar types to accomodate the larger stock thickness. We use that Wade pattern on any fork with a stock thickness 4 1/2" or greater, regardless of the shape of the fork. However, to fit the bulgy shouldered horse type we cut that back to the regular length and put more back cut on the fork so the saddle maker still has room to work there. So nothing is set in stone.
Posted by Cary Schwarz on Dec 10th, 2011
Good stuff here Rod!
Posted by RodandDenise on Dec 10th, 2011
Thanks Cary. There is so much misconception on saddle trees, and Wades in particular. We know you are also trying to set things straight. We'll all just keep telling the "actual facts" as they are and hopefully eventually some of them will make it out into common knowledge.