Center of pressure under a saddle 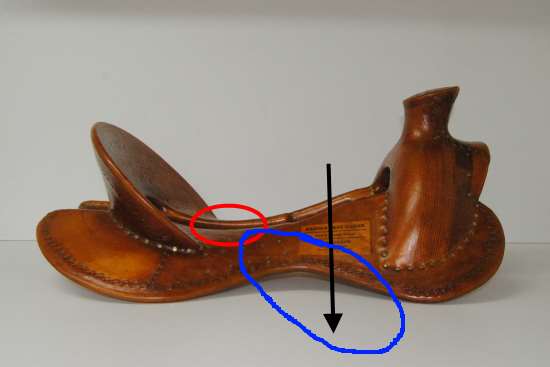 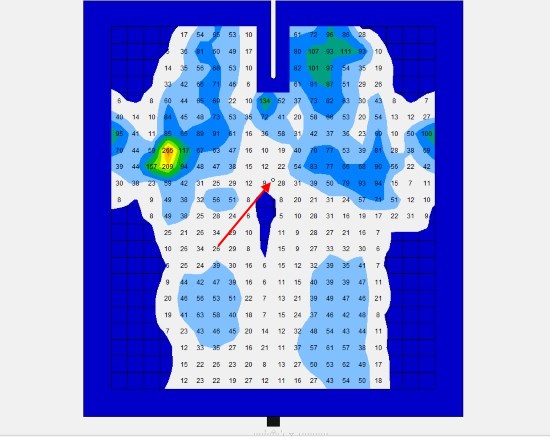 So last fall we had a chance with our pressure mat to test and see where the center of pressure under the saddle really falls. One of the neat things that the software with these devices can easily do is compute, from all the pressures of all the sensors, where the exact center of that pressure lies. On our system, it is marked with a small circle. Now because it only computes the center of the calculated pressures, smaller high pressure areas will affect it. And the pressure exerted on the saddle by the rigging/cinch system pulling down is also included in the data. But overall it gives us a very good idea of what is happening under the saddle.

(By the way, you will notice that there isn’t totally even pressure under the saddle in any of these examples. The reason for that is that there isn’t ever totally even pressure under a saddle. And the areas or pressure are constantly changing and shifting, even on a horse standing still, just due to their breathing. What’s higher now is lower now – and in about that kind of time frame too. That’s just the real world, which is why the pressure sensing equipment, while a great step forward in learning about how saddles work on horses, still has a lot of limitations when it comes to being practical for research purposes…) 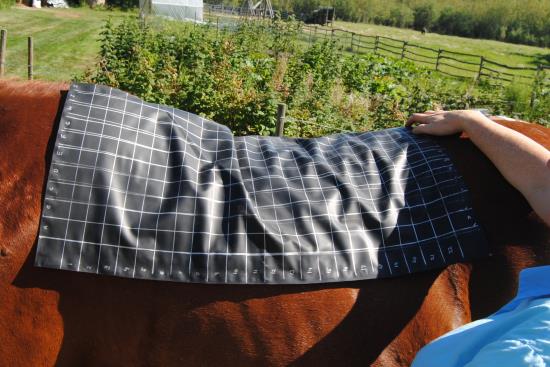 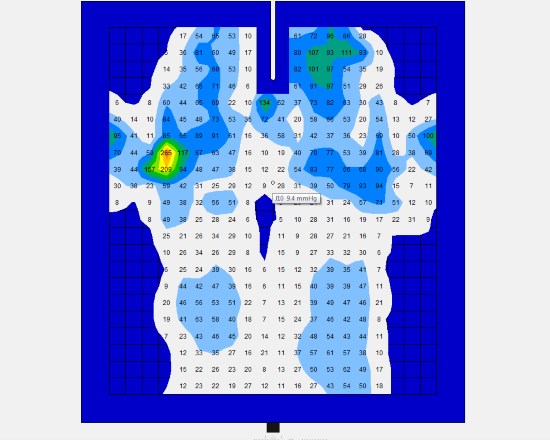 The software is also designed so that when you put your cursor anywhere on the pressure map on the screen, it will tell you the latitude and longitude of the sensor over which you are resting, plus the pressure on that sensor. The cursor doesn’t show up in the screenshot, but with it resting on the circle, you know that the center of pressure of this reading is at J 10. The circle is very close to the center line, but it has to read J or K. In this case, the hot spot coming from the rigging hardware on the left side is probably what is moving the calculation to the left, or J, side of the picture. 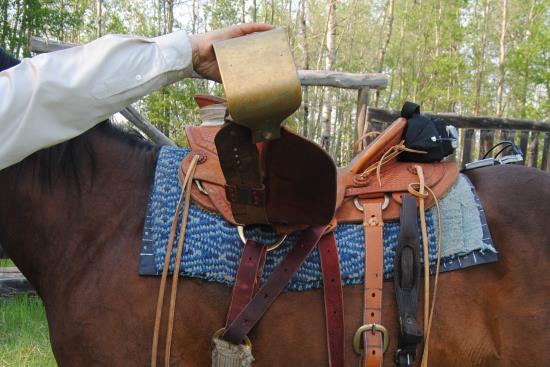 That is all well and good, but with the pressure mat under the saddle, how do you know where those sensors are sitting? Ahhh, grasshopper… We have ways of figuring this out… 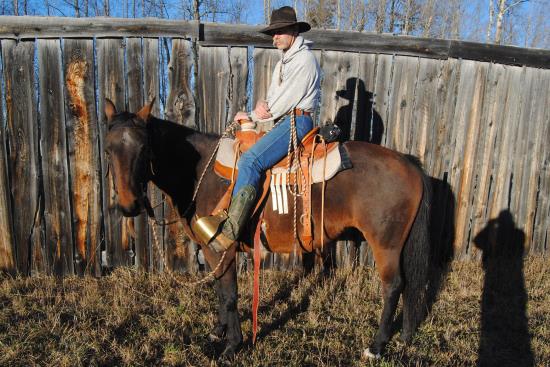 And in this case, good ol’ masking tape works. (The latigo is dangling because the carrier on this saddle is behind the rigging, which puts the latigo hanging right over the tape. No, he didn’t go riding like this…) 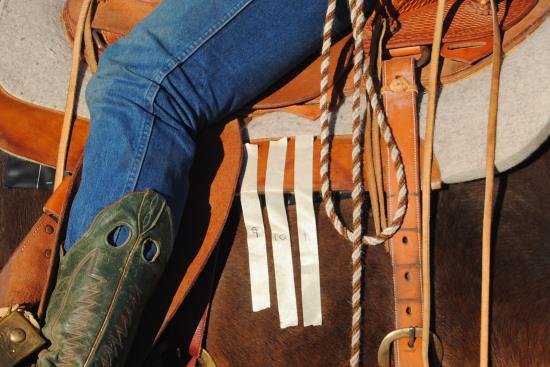 We put the tape over the center of the 9, 10 and 11 sensor lines on the pressure mat. 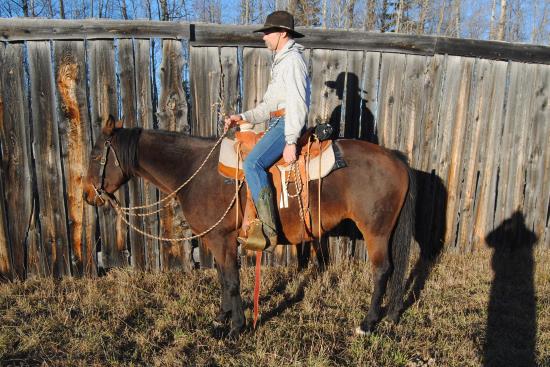 With Rod’s leg back in its proper position, you can only see #11 tape and the bottom of #10, but that gives us what we need to know. 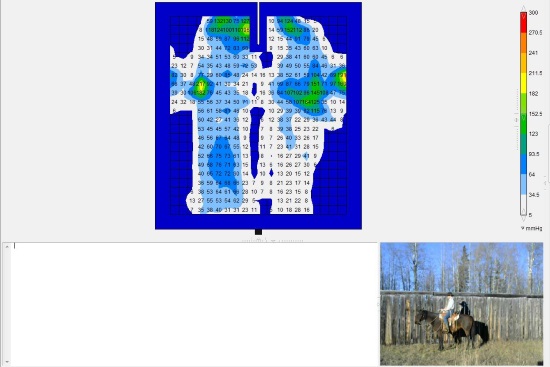 So, what did we find out?? Well, here’s a screen shot of what our computer shows. Rod was sitting upright, and we had everything as square as we could get it under natural conditions. (Speaking of natural conditions, while this was an extremely nice day for the middle of November in northern Alberta, it was still chilly out. Thus, Rod’s wearing a hoodie – tucked into his jeans so you can see his body position as much as possible. While not ideal, it’s better than his Carhart jacket!) 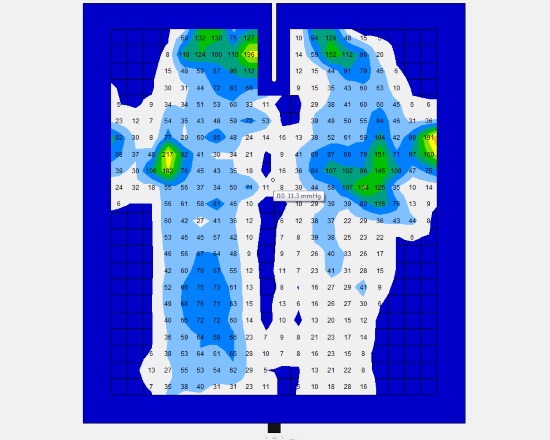 And we discovered that the center of pressure is at J 10. 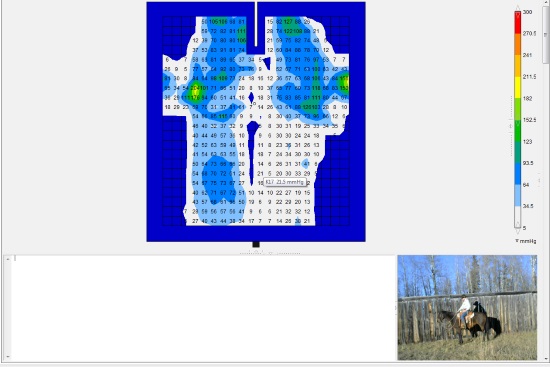 And this was consistent. Notice that while the picture used to demonstrate the circle showing center of pressure is also at J 10, it is obviously a different reading. And here is another screen shot of yet another reading. 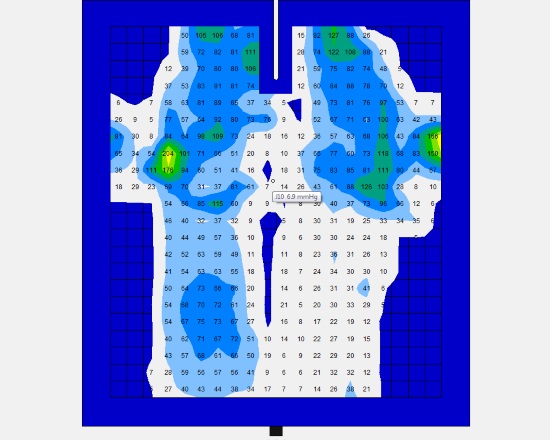 Even with Rod’s arm back a bit, the center still reads J 10. 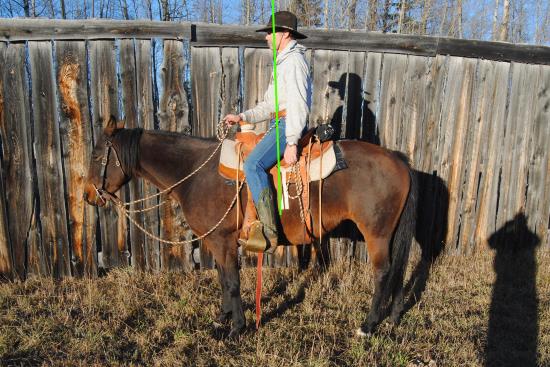 So where is this under the rider? I’ve drawn in a line showing where sensor line 10 is. (Too bad that the right sleeve of the hoodie bulges at just the wrong spot. It makes Rod look like he has a gut on him, which he doesn’t…) 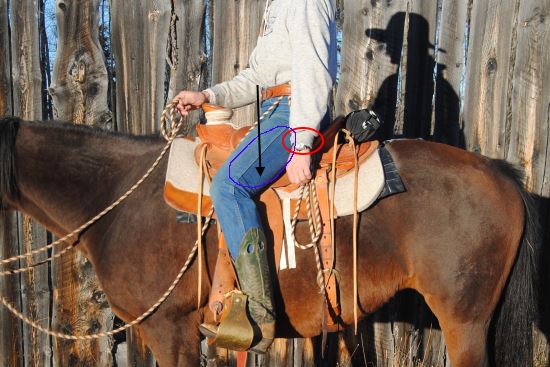 So, going back to the idea we started with – some of the weight of the body is carried on the seat bones, some on the thighs, and some in the stirrups. 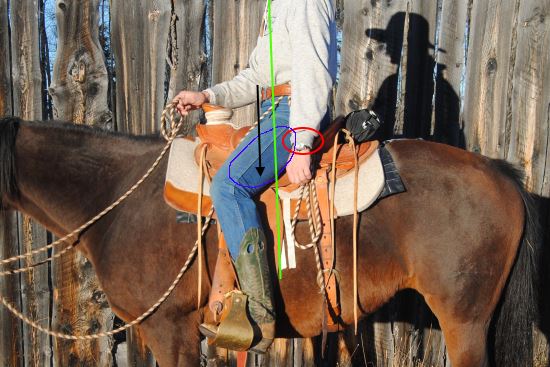 With the result that - at least in this case, though I expect it is a general rule - the center of pressure under a rider on a solid tree (important point, that!!) is not under his seat bones, which people generally use when thinking about rider position, but pretty much at the front of his body.

How this actually all works out relative to that ever elusive center of mass/gravity of horse and rider, who knows? (Regardless, the saddle always has to sit in its proper position on the horse’s back or it will harm the horse.) But it makes you think a little, doesn’t it???

(What happens when the rider isn't upright, you ask?  We'll get there...)

Posted by Wendy on Mar 4th, 2016
Thank you so much for your blog on saddle fit and function . I've learned so much and look forward to it each post.
Posted by RodandDenise on Mar 4th, 2016
Thanks, Wendy! Glad we can be of help.
Posted by Jim Townshend on Mar 5th, 2016
Denise; I think what you are showing pretty much confirms what a lot of people have always experienced. I have always thought of the pressure exerted by the rider as being a bit like the bubble in a spirit level. The shift in amount of pressure, in any one instant in time, from one focal bearing point to another on the side bars, the surrounding padding which dampens and diffuses the pressure, and the leathers of the saddle, (skirts and rigging), which also dampen and diffuse pressure, account for the fact that a horse can pack a rider and equipment for a long time in difficult terrain at various speeds with no apparent injury to the horse. Add to that the strains of roping heavy livestock, and it is truly amazing how the saddle creates an advantageous system for both horse and rider. I find it useful to think of how the weight and pressure of the rider and work, and shifting terrain act on the back as a kind of triangle which shifts constantly with respect to angles and side lengths. Neat demo, many thanks. P.S. Got last trees the other day and just want to say, thank-you for all the great trees, service, friendship, and freedom of idea exchange. All the best, as always jt