Movement of the shoulder blades and saddle fit 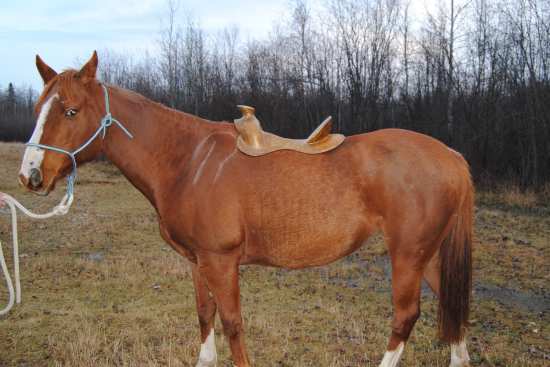 As we discussed in the last post on anatomy, the back corner of the shoulder blade rotates down and back when the horse extends his leg forward.  So how do we fit a saddle behind the shoulder blade and yet not interfere with its movement?  This is the practical question that still has not been scientifically researched, but there are some basic facts that make reasonable conclusions possible. 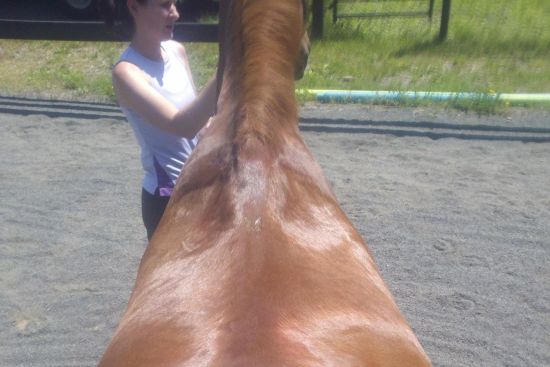 The problem with saddles and shoulders is that we don’t want to squish muscle between bone (the scapula) and a hard place (the bar of the saddle tree).  That will damage the muscle and create problems.  The long term effect of excess pressure on muscle is atrophy (shrinkage and degeneration), leaving the shoulder blades sticking out from the body with hollows behind them as the above picture demonstrates.  It has been known experientially for a long time that severe muscle damage can occur without outward signs on the skin, but a study by GT Nola and LM Vistnes, “Differential response of skin and muscle in the experimental production of pressure sores” Plastic and Reconstructive Surgery, 66(5): 728 – 735, published in 1980 proved this fact.  So just because you have no white marks or open sores doesn't mean the muscle underneath isn't damaged.

So if the shoulder blade rotates down and back, and we don’t want to compress muscle between it and the bar, why are we telling you that the bar of the tree (not the skirts on the saddle) should sit right behind the shoulder blade?  Aren’t we creating a problem?  No - because of three important facts:

#1 – the shoulder blade moves relative to the body.

As we discussed in a previous post, there is no bony connection between the front leg and the body, so the shoulder blade can move against the body wall and tilt and rotate in 3 dimensions, although its movement is limited by its muscular attachments.

#2 – the shoulder blade rotates back when it is unweighted.

#3 – the shape of the front bar tips of the tree

Putting it all together - how it works in real life

As the leg extends, the shoulder blade moves back.  Because it is not solid compared to the rib cage, it has the option of angling in and out as it moves.  If the front bar tip is well designed, it guides that back tip of the shoulder blade underneath the bar during the time that the leg is extended the farthest.  Because the leg isn’t weighted at that stage, the muscle isn’t compressed.  By the time the leg has weight on it again, it is back out from under the front bar tip, away from possible compressive forces.  This is how a well designed bar can sit right behind the shoulder blade, not interfere with its movement and not cause damage to the horse.  While there are no published papers (yet - hopefully one day!) that show this, there has been unpublished work which shows this to be true.

A big question that still needs to be answered is “What is the ideal shape for the front bar tip?”  It is obvious that if it is flat and blocky, it won’t let the shoulder blade slip under.  You need to have enough curve to allow this.  The opposite - the idea that you can “flare” out the very front of the bar tips enough that they sit over the shoulder blades a bit but don’t touch them - needs more study to see if it actually works or not.  There are a few theories as to what may happen under these bar tips, but at this stage, we don’t think they work, though a few other tree makers disagree.  There is even the idea that you can “flare” them out so you have inches of bar over the shoulder blade that don’t touch.  We are sure that one won’t work in anything but controlled arena circumstances, and probably not even then.  It is because of misconceptions about how the tree sits relative to the shoulder blades that we don’t like to use the term “flare”.  It can mean too many things to different people.  We use the term “relief” because we feel it more closely represents what is really happening under the saddle.

Comments?  Questions? Disagreement? Please leave a comment in the section below.  (It won't show up right away.)  I'm curious about what you readers have to say about all this.

(Later research showing why we need to rethink the traditional ideas of shoulder movement and saddle fit is discussed here.)

Next up - the hind limb.

And if you want to see how this works with pressure mat data to confirm it, check out our Proper Position of a Western Saddle video.

Posted by Harold Rogers on Nov 12th, 2011
Rod and Denise so glad you are addressing this question. I am located near St. Augustine , Fl. We are very near the Parelli Campus in Ocala, which they will be closing soon due to money issues. But everyone is doing the Parelli Natural Horsemanship and a lot of them are buying his saddles, the plastic equiflex wide front plastic saddles. They are told this avoides the scapula issues. I have been pretty much at aloss for words on this issue. Horse people down here are likely to buy a recreational type of saddle, much of that based on weight and looks. Price is also a factor of course. But the scapula issue is drilled into them. Any advice would be very helpful. Thanks Harold Rogers my web page is haroldssaddlerepair.webs.com
Posted by RodandDenise on Nov 12th, 2011
Among western working cowboys this issue just isn't discussed simply because it isn't a problem with good Western saddles positioned properly on horses. I think it is talked about so much because it is an issue with English saddles due to the way they are designed with the thin, narrow metal arch that can act as a block to the scapula if it is positioned improperly. Then people who deal primarily with English saddles extrapolate their problems to Western saddles without understanding the major differences in design and structure. And we end up with a whole pile of misinformation that gets repeated because "so-and-so" said it. I think the best response is clear information explaining the truth (the "actual facts" to use a Bill Dorrance expression) about both equine and Western saddle design and structure, and how they work in the real world. Next week's post will be about false saddle fit "rules" and why they don't apply to Western saddles. I hope it helps.
Sincerely,
Denise
Posted by Christina Savitsky on Nov 13th, 2011
hummm.... lots to think about here!

My experience shows me that English saddles are harder to fit, they tend not to have any flare or relief in the front at all, and many English riders are not comfortable changing they way they pad the saddle....but their horses change from season to season & there is no padding difference!?!? In order to change the 'padding' of their saddle they take it back to a saddle maker & ask him to reduce or increase the amount of stuffing inside the bottom panels. Many of these ladies are shocked at my clinics when I put my wade saddle on most every horse available & it fits everyone pretty darn well especially with my little collection of thin pad, thick wool pad, blanket & built-up pad!

Why is it that good saddles fit lots of different horses? I thought it had something to do with the flare/relief at the front of the saddle which works in conjunction with the rock of the bars, leaving room for movement under the front edge of the leather of the saddle (which will obviously come further forward on the shoulders than the tree) so the tree can be that much closer to the movement of the shoulder without interfering.

I can't help but think that some amount of atrophy like here in these pictures may not be directly from the saddle fit (or lack there of) but from lack of collection when a rider is involved, not just from not knowing or asking for it, but from not being in time with the horse making it very difficult for the horse to move balanced at all.
Posted by RodandDenise on Nov 13th, 2011
Christina,
Thanks for the comment. Why is it that good saddles fit lots of different horses? Because they have good bar design (and saddle design) with relief around all edges so there is no Poking or high pressure spots anywhere and lots of surface area to distribute the Pressure. That way even if the contact isn't ideal (the entire bar surface is not on the horse), there is still lots of surface area to carry the rider's weight without the PSI getting too high. Very basic concepts which we discuss more on our Factors that Affect Fit page. But it can be hard to see that big picture if people are focused on certain areas or certain "rules" only.
You mention the front of the skirts on the shoulders. Good point. This is in the saddle maker's job where good saddles have well blocked skirts - meaning they are wet down and then molded to the bars so they curve away from the horse along with the bars. Cheap saddles rarely have their skirts blocked so they end up sticking out straight from below the curve (relief) built into the bar and jabbing the horse in the shoulder blades, maybe even shoving the saddle back. Over time the leather will soften up (depending on the quality of the leather) and this won't be as much of a problem, but it probably never be as good as if the saddle maker blocked the skirts properly to start with. The work the tree maker puts into making the bars fit the horse can be negated by the saddle maker if he doesn't block his skirts properly.
The atrophied horse in the picture has been ridden exclusively English. I don't see horses like this that have been ridden only Western. I'm not saying there isn't damage done to them by poor saddles or, very commonly, by saddles held on the shoulder by breast collars, but I have never seen damage to this extent unless the horse has been ridden English a lot. Tells me something about saddle design, surface area and PSI differences between the two styles of saddles...
Riders can definitely cause sore horses which are often seen as "saddle fit" issues, but we think it is primarily from them riding unevenly or just bouncing all over the place, like you say. As for lack of collection causing these problems, we don't think so at this point, and I'll talk about why when I talk about shape and movement of the spine during different gaits in future blog posts.
« Previous
Next »