Safety equipment around the shop

Posted by RodandDenise on February 1, 2013 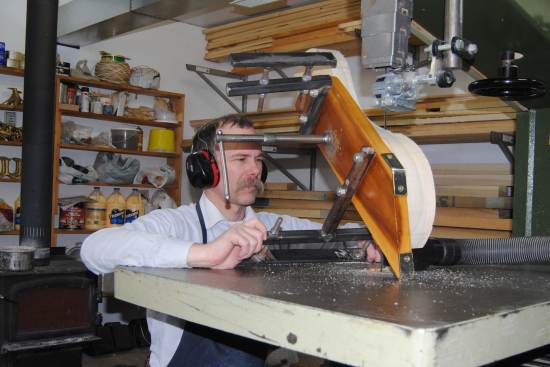 You wouldn't think that saddle tree making would be a profession overly fraught with danger, but there are enough things that can cause health issues, short or long term, that we do take a few precautions. 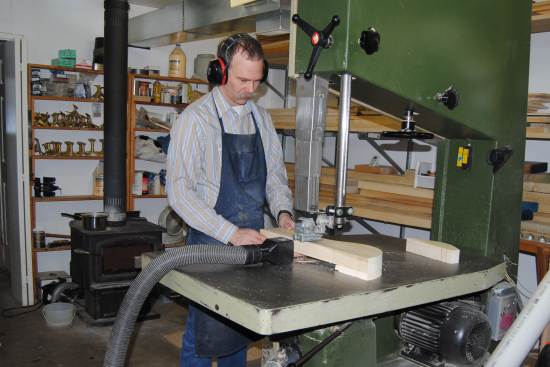 One of the most common things you may have noticed in a lot of pictures is Rod wearing hearing protection.  We both have "ears" and wear them a fair amount of the time in the shop - basically when any of the equipment is running.  These things are loud, especially the jointer/planer, and over time will damage hearing, probably even with the protectors.  But we might as well do what we can to protect our hearing as much as we can. 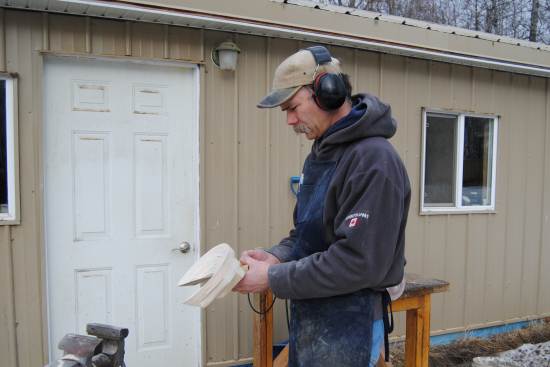 Rod also wears his ears whenever he uses his grinder, even if it is outside.  That thing is also loud and he stands very close to it. 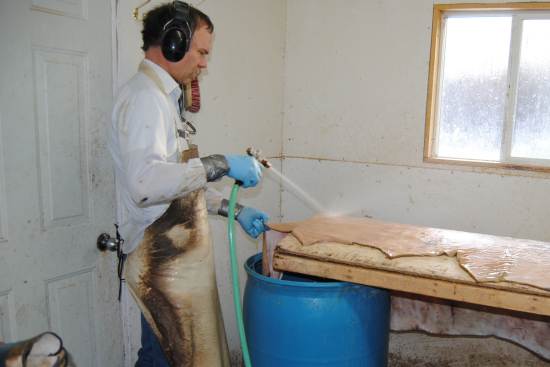 And when he makes rawhide inside, the cement mixer is very loud as well as it rattles around for hours on end.  So he wears his ears then too.  Outside, he is far enough away from the mixer that it isn't a problem.

I'm glad Rod is as conscientious as he is about wearing his hearing protectors.  I keep telling him I don't want to be yelling at him when he gets old.  (Maybe I do that enough now...) 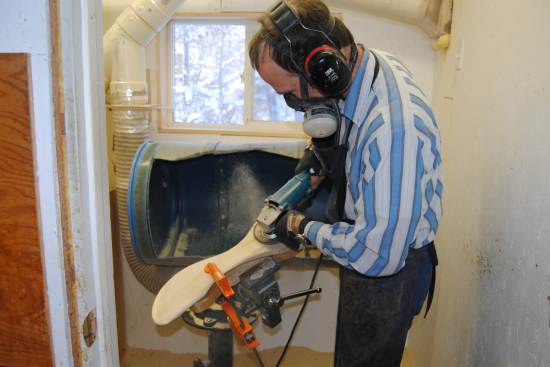 Something else Rod is very conscientious about wearing is his dust mask (with chemical filters) when he needs it.  We have a good dust collection system now, so he doesn't need to wear it when he is in the main part of the shop.  But when he is in the "dirty room" spraying dust everywhere with the side grinder, it is important that he protect his lungs.  After all, when we first starting this job we were told that it is the dust that kills tree makers.  And having worked without a good dust collection system for too many years, we can sure understand why. 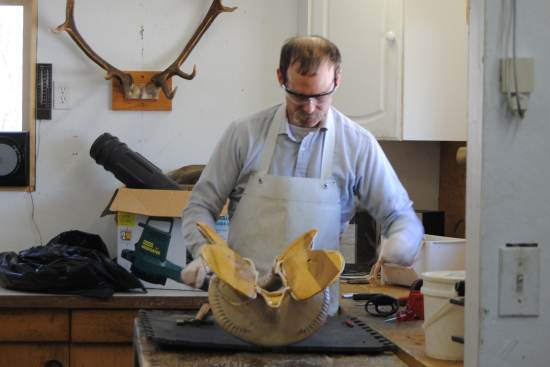 One day within the past couple of years I walked into the shop when Rod was placing nails while rawhiding and he had his safety glasses on.  He bought a pair or two back when he first started building trees, but hasn't worn them much.  It isn't uncommon when he is nailing to have a nail fly off somewhere else in the shop, sometimes not to be found for many days, but wearing his safety glasses was a new development.  So I was curious and asked him about it.  His response was something like, "When you think long enough about how those nails flying around maybe could get you in the eye one day..."  And he has worn them when he is nailing ever since.

It was within a couple weeks of this that a carpenter friend of ours had a chip of metal come off a nail from an air gun and penetrate his eye, going right through to the retina.  This guy normally does wear safety goggles when he is using his air gun, but it was the end of the day, he had taken them off, and he decided just to do one last thing...  Some fancy surgery and a number of months later, he still has some residual damage, but his eye was saved.  Not many decades ago it would have been a gonner. 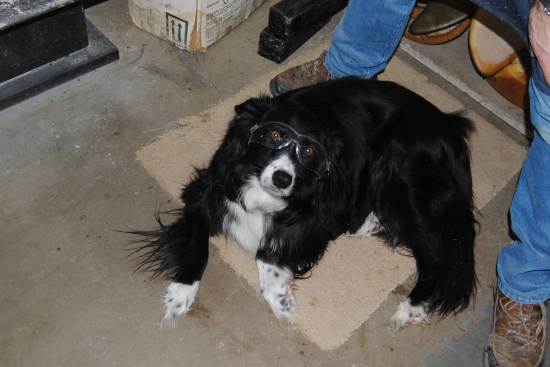 Taylor dog is getting fairly deaf now, and I'm sure thirteen years of laying in the shop with equipment running and no hearing protection hasn't helped her with that.  But today Rod figured we should at least protect her eyes...  Didn't work too well.  She took about two times to learn to drop her nose and they would fall off.  I had to take the picture quick! 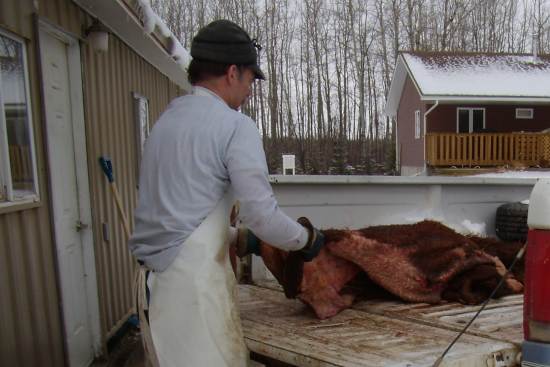 Something else Rod uses a lot are gloves.  Different ones for different purposes.  These are heavy duty, chemical resistant work gloves that live in the rawhide room.  They get worn when handling fresh hide and rawhide, both fresh off the truck and whenever hides are switched between barrels or buckets when the water is changed in them.  They are easy on, easy off, and last a fair amount of time before we have to buy replacements. 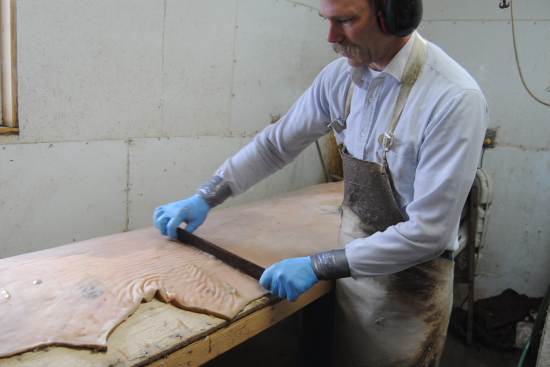 Rod has different gloves when he is making rawhide.  These are disposable nitrile gloves and are good for keeping the chemical away from his hands.  But because they are thin, they let him use his hands far better than the heavy gloves do.  You'll notice he duct tapes them to his sleeves to keep them up so the liquid doesn't leak in the top and then sit next to his hands.  Experience taught him this... 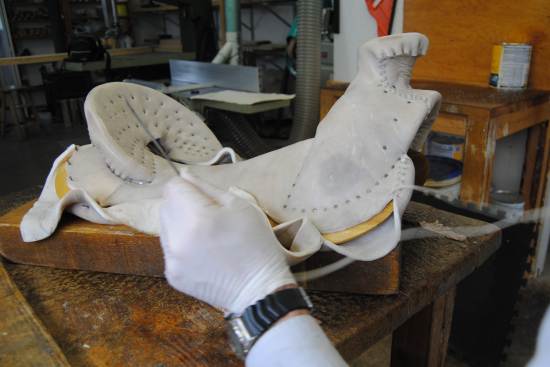 Rod also wears latex gloves for a lot of the time when he is rawhiding a tree.  This was a suggestion I gave him very early on because as a vet, I was wearing gloves for doing all sorts of procedures, including hand stitching bovine hide with large needles.  Only in my case, the hide was still on a living animal and the stitches were able to be removed, eventually...  But I learned that wearing those thin latex surgical gloves sure saved my fingers a bunch, not just from slices from the needle if (when) it slipped in my hands (sometimes the gloves were sliced but I wasn't), but also from cuts from the suture material as I hand tied the knots tightly. 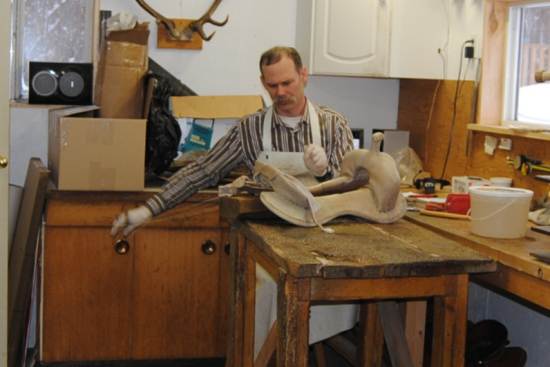 So when Rod started stitching rawhide, I suggested he try the latex gloves to see how he liked them.  Rawhide holds nasty bugs and anybody working with it much knows that the danger of getting blood poisoning is pretty high.  Rod has had cellulitis (infection diffusely in the cells) in his hand two or three times over the years, probably from bacteria off the rawhide getting into cuts or scrapes on his hands.  It never has gone farther than his hand though, and he has learned to get to the doctor for antibiotics pretty quickly when the signs appear.  We also keep a bottle of hydrogen peroxide and another one of Hibitane in the shop to scrub up with when the inevitable pokes and cuts occur, but I believe using the gloves has saved him from a few more infections along the way.

So, even though sometimes it may be more macho to be bare eared and bare eyed and bare handed, it is smarter to wear the protective equipment we need when we need it.  Now, if I could only get him to wear that chemical filter mask when he is using the body filler.  That stuff is nasty and can't be good for his lungs...

Posted by Ray on Feb 4th, 2013
Great article although I would like to see Rod wear the safety glasses when running the equipment.