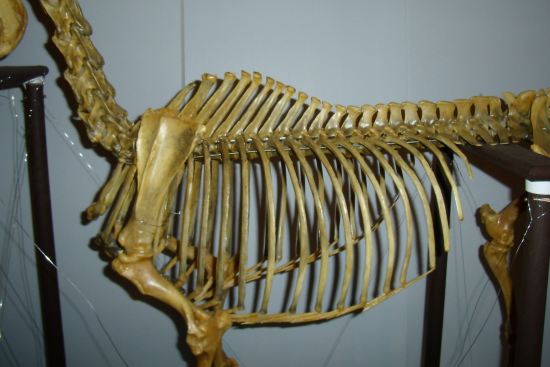 We ended the last post with the idea that the shape of the vertebrae is important in the movement of the thoracic spine and therefore the thoracic part of the back.  If you carefully watch a horse move, you will see that his back flexes (rounds) and extends (hollows) a bit.  That change in shape varies with gait, head position and a number of other factors.

First, it is important to realize that flexion and extension of the horse’s back as he moves isn’t just an up and down thing.  The back rarely all curves up and then all curves down as the cardboard in these pictures does. 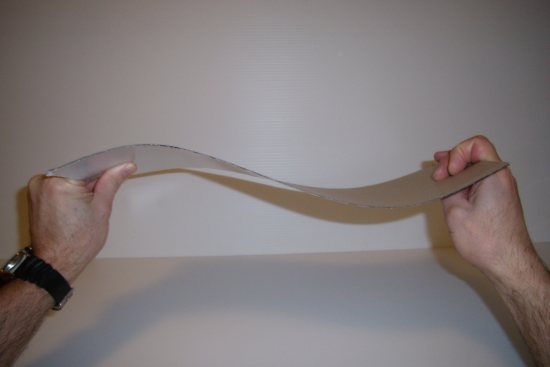 It is actually an ongoing “flow” along the spine which varies depending on the gait of the horse.  The back also curves side to side and there is even twisting of the vertebrae during the movement, and all this goes on continuously.  It’s not as extreme as the cardboard demonstrates, but it’s still complicated.  However, to simplify things for now, let’s just talk about flexion and extension.  How does this happen? 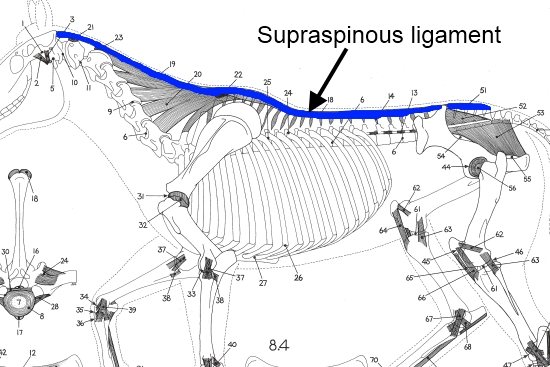 Well, a lot of it has to with that supraspinous ligament, the one that runs from the head all the way to the sacrum, remember?  The nuchal ligament part of it goes from the head to T2 or T3 and it is elastic.  Then there is a gradual transition to the non-elastic rest of the ligament which is attached to the top of every spinous process all the way back to the sacrum.  So as the horse stretches the nuchal ligament, it pulls forward on the rest of the supraspinous ligament, which pulls forward on the dorsal spinous processes all the way down the spine. 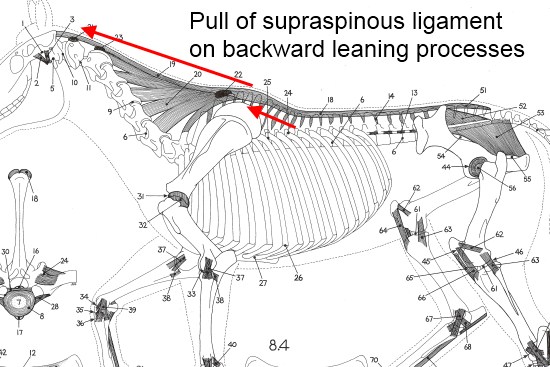 In the horse, the pull on the ligament from the head starts acting at the front of the thoracic spine, which is where the dorsal spinous processes lean backwards.  These processes straighten up a bit, keeping the pull going down the spine and causing even more of an effect in the center of the back than if the spines were vertical, as bridge supports usually are.  So putting the head down lifts the center of the back a bit.  When the head goes up, there is less pull on the ligament, the processes lean back again and center of the back goes down a bit.  How much is this “bit”?  It really varies depending on the horse, its body condition, any back health issues, etc.  There is no “rule” that we know of that can figure it out. 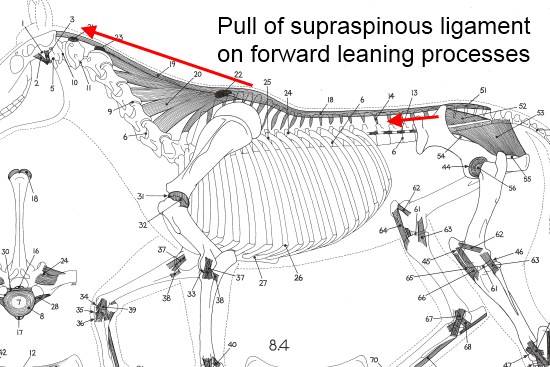 But the pull from the head doesn’t stop at the anticlinal vertebrae (the one whose dorsal spinous process goes straight up and down, often T16).  The pull continues back to the vertebrae whose dorsal spinous processes lean forward – from T17 or so back to L6.  There are studies that show that forward pull along the supraspinous ligament actually decreases the horse’s ability to “round up” or flex that part of his back.  However, the effect of head position on the caudal (towards the tail) part of his back is much less than on the cranial (toward the head) section of the spine.  The caudal part of the spine is far more affected by the pull from the back of the horse – the sacrum and pelvis connection.  But we’ll talk about that later.

So in talking about flexion and extension, rounding and sagging, what we are really talking about when it comes to saddles and trees is the amount of rock in a horse’s back.  By understanding the anatomy, we understand why rock changes so much as the head goes up and down within the stride.  If the horse is allowed freedom to move its head the way it wants, it goes up and down even more as he sees something on the horizon he wants to check out or if he looks carefully down at the ground he is about to walk on.  The amount of change in rock during a stride varies in amount depending on the gait as well, with the greatest amount of change during the lope, the least amount at the trot and the walk in the middle.  And while there are other factors that affect the change in rock in the back, head position is a large component of that change.

So with this much change in rock as the horse moves, is rock in the tree important anyway?

Of course it is, because even though it changes regularly, it changes around the “average”.  If the rock in a tree is correct, then during a stride, there will be a time when the full bar front to back will have even contact with the horse.  There will also be a time when there is less pressure in the middle, as the horse’s back sags a little.   And there will be a time when the horse’s back comes up a little.  The pressure pattern in this case may be more central on the bar, but the higher pressure is more likely to be distributed over the whole front half of the bar, depending on rigging position and some other factors.

Since the amount of rock in the horse's back changes constantly, being a little off the “average” might still be OK.

This, we believe, is why there are tree and saddle makers on both sides of the question: “If you had to have a bit too little or a bit too much rock in a tree, which would you choose?”  So long as the bar design is correct (lots of surface area with edges and bar tips that don’t dig in to break Principle #2 – no Poking) there is a lot of leeway with rock.  But a bar without good edge and tip relief can cause problems pretty easily if the bars are too flat and those tips dig in.

It is only when the mismatch gets to be extreme that a well designed bar would cause problems just due to rock differences.

These extremes are more likely when you have equines whose backs are towards the ends of the bell curve of “average” rock amounts.  Mules tend to have much flatter backs than horses and generally need trees with a lot less rock than the average horse.  On the other end of the bell curve, there a few reasons that horses can have lots of rock in their back – atrophy of muscles and other damage to the back making it more “hollow” than it would be if it were healthy, really muscular horses with bulging muscles fore and aft which leave a dip in the middle and, like people, “letting the belly go” causing the back to sag, as in the above picture.

This mismatch also occurs when you have trees actually built to the extremes due to different ideas.  Bars can purposely be made with excessive rock based on the idea that you need to “flare” the front and back of the bars so much that only the center of the bar actually contacts the horse, resulting in much reduced surface area and therefore poor weight distribution.  This is supposedly to avoid any interference with the horse’s movement.  On the other end, bars are sometimes purposely made too flat with the idea that “the horse needs room to round up under the saddle”.  (This goes against research that shows that a horse’s back sags under a rider's weight.)  Bars are also made too flat when a tree is made with a very thin bar for “close contact” but it also is made flat for the flat seat the rider prefers, as in the above picture.  Either way, you have a bar that bridges.

So how do we figure out what the “average” is?

Based on the best information we have available now, we go with the standing horse’s shape when he is in his normal “working shape” with his head in his “normal working position”.  For people who want to do back drawings or use the Dennis Lane system, you want the horse’s head to be at the height and in the basic position he holds it for the majority of your riding time.  If you take the measurements when the horse is eating grain off the ground or spooked and star gazing, the information we get about their “average” rock is wrong.  And as we say on the Measuring Horses for Fit page, if your horses are normally very fit, then that is the ideal time to take the measurements as opposed to at the end of a few month’s turn out time.  However, if your horses are pretty much pasture ornaments and used only for occasional riding, then that is the shape you are going to need to fit because that is what they will be when you ride them the most!

Practically, for the majority of our customers there is an “average rock” we build into our bar, unless requested differently, that has been working well for our regular customers for all the years we have been building trees.  This again tells us that the bar design (edge and tip relief, large surface area) is more important than actual amount of rock, at least until you get to the extreme body types.

As for the lateral bending and axial rotation, we will deal with that a ways down the road.  Next, on to the lumbar vertebrae!