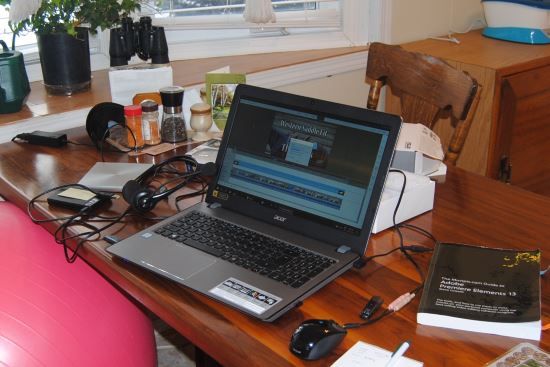 We keep mentioning the video we are producing on Western Saddle Fit. Many of you may remember last May when a major forest fire ended up burning a fair proportion of the city of Fort McMurray in north-eastern Alberta. It was nicknamed “The Beast”. Well, this video project has morphed into a monster named “THE VIDEO”, well deserving of all caps and a deep voice, if not ominous music... 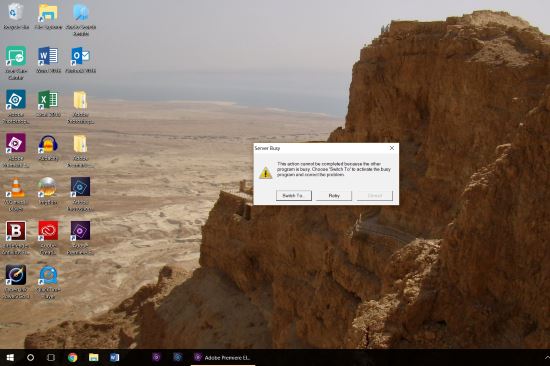 It’s not like we haven’t been working on it. It is just that almost every conceivable issue that can come up with the video editing programs have come up, or at least it seems that way. Yes, that is programs -  plural - because we had to get a second one when no one, including the Adobe geeks, knew why the first one wouldn’t make menus properly. Now the second one won’t burn the files properly, and no one knows why that issue is happening either… This may explain the screams of frustration you may have heard from southern Saskatchewan lately. (I really, really, really dislike red X's and the word Error…) 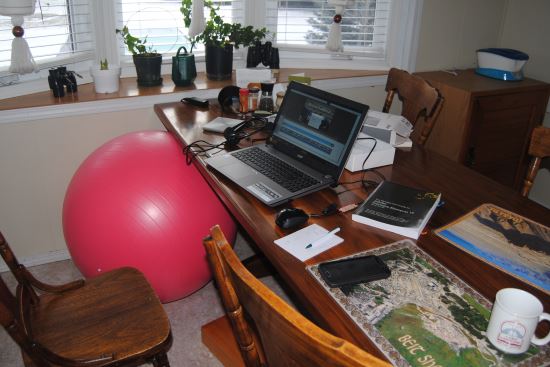 I have the end of the table in our dining room set up as the video station. Yes, I have a desk but when I put the laptop on the desk with our main computer, I keep using the wrong mouse and keyboard… 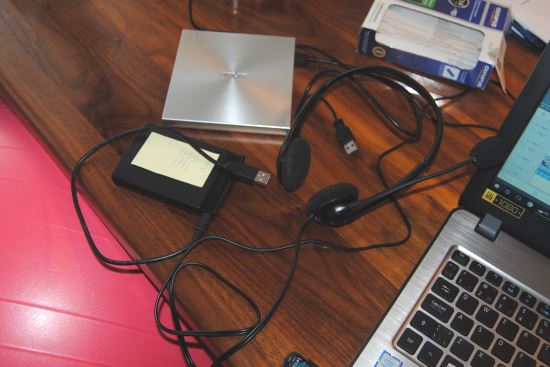 There are a lot of cords and other “stuff” around the computer. I have a headset that I use to work when Rod and others are over studying. We got a newer computer that doesn’t have a disc drive built in so we had to get an external disc drive. And then there are the backup drives, because at this point if we lose our files, I would cry. With everything we have put into this over the last almost two years, maybe even Rod would cry… 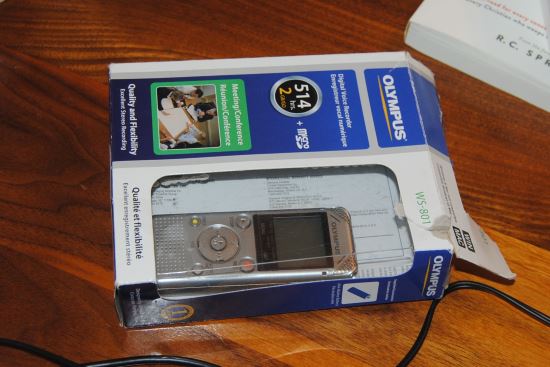 I dug out the voice recorder again. We had separate audio and video because with filming outside the audio from the camera just wasn’t going to be good enough. Rod’s job over the summer was to choose which take or combination of takes (out of many!) we would use for every segment, and then match up the audio and video. The recorder has been away in Rod's office since we moved, but I needed to do a bit of a voice over, so pulled it out again this week. 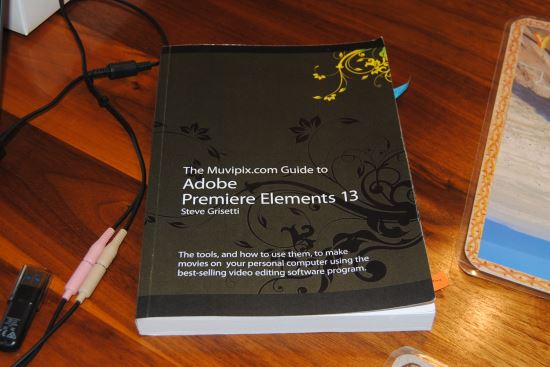 This book has been very valuable in dealing with the oh-so-steep learning curve of video editing, but what has been even more valuable has been the Muvipix forum. The people there have really tried to help us figure out what is going wrong, plus very graciously answering newbie questions. There is a lot about the program not in the book (it is a very complex program) and if I have one suggestion for them, it would be to make the index a lot better. But overall, I would strongly recommend you get one if you use Adobe Premier Elements. (That said, with the issues we have had with it, I would strongly recommend you try another program altogether…) 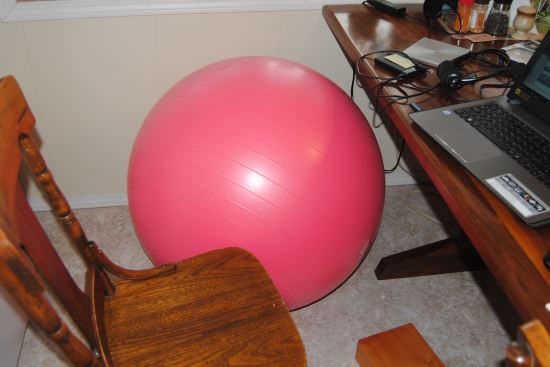 And I bought a big pink ball to use as a seat, at least part time, because my back was really starting to bother me from sitting so much to work on “this thing” (another not so pet name for it today.) (At least chiropractor visits break up the work a bit...) 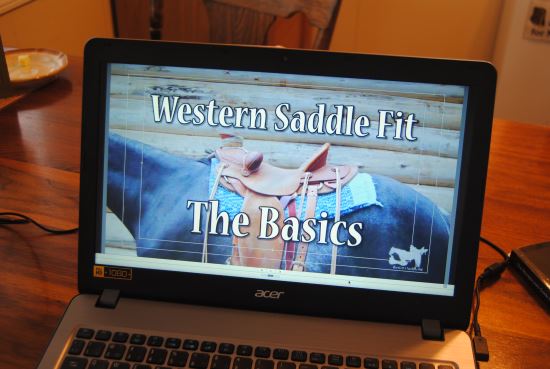 But like I said, it’s coming! I actually got a test disc burned today and we watched it the whole way through at one time tonight. It’s about 65 minutes long, and we were really pleased with the way it is turning out. We think it has good information, lots of pictures and extra video (called B- roll in the biz. Sounds impressive, eh?) to demonstrate what we are describing. But then, we may be biased... 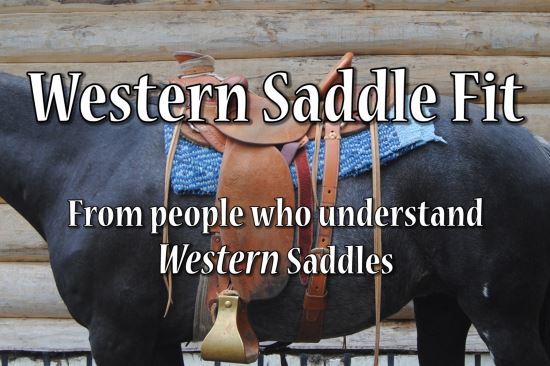 Information about western saddle fit from people who actually know primarily western saddles is really lacking “out there” (wherever that is), so we see a real need for something like this. 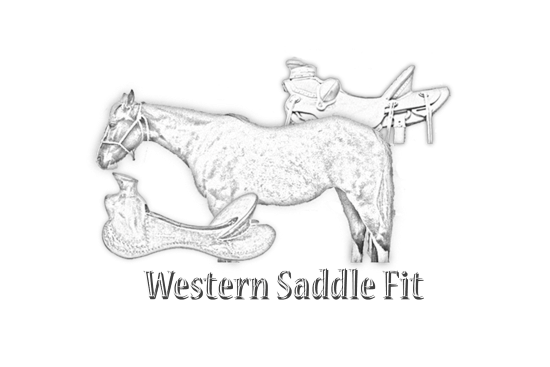 And besides, I came up with this really cool watermark and we have to have something to put it on, right?

Unless the computer totally freezes (which is actually more of a possibility than I’d like to consider right now) I hope to be able to send away the “The Basics” - the one hour video – next week. Then time to get it to the place that is making the DVD discs, time to make them and then get them shipped back. So hopefully by the end of February or so it should be available. We also considering streaming it from our new website (oh yeah, I also need to work on that - in my spare time…) so any input on how you would prefer to watch it sure would be appreciated!!

PS.  We still plan to finish up the long video after we get this one done. It will be 4 - 5 hours, geared towards saddle makers, professionals involved in the industry and people who just want more information than you can get in an hour long video. It will include a lot more of the why, not just the what, and also extra topics such as some anatomy (my favourite!!). But that is down the road a ways.