Foreleg of the horse - bones and attachment 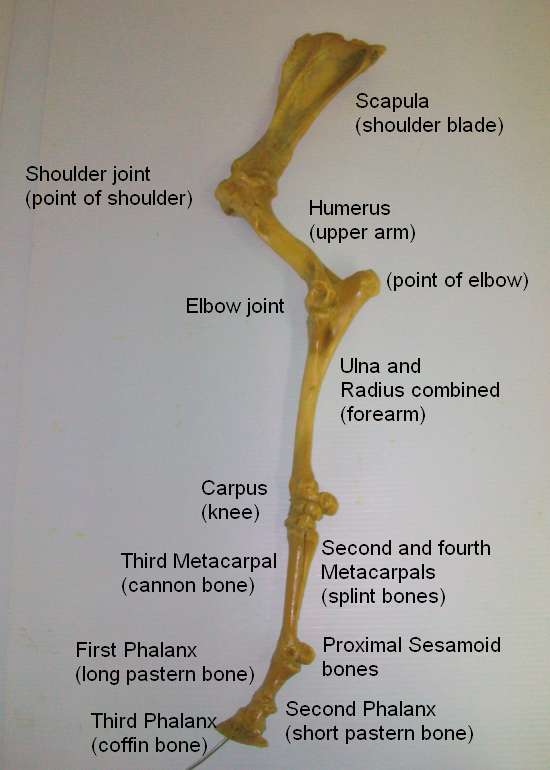 When it comes to saddle fit and the forelegs, there are a lot of questions still to answer, and there are a lot of “answers” presented as fact that are untrue.  Most of the reason the answers are unknown is because there is still a lot unknown about how the front leg actually moves in real life.  And why that is unknown has to do with the anatomy of the front leg and how it is attached to the body. 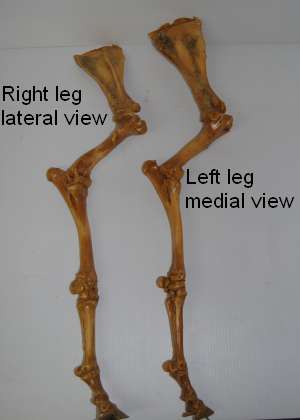 Unlike humans, there is no bony connection between the foreleg of most mammals, including all our domestic animals, and the axial skeleton (the main skeleton without the legs).  The foreleg is attached to the body strictly by muscle.  Or, to look at it another way, the body is suspended between the two front legs with a sling of muscle.  These muscles are attached primarily to the scapula (shoulder blade), though the pectoral muscles also have attachments to the humerus.  (I’ll talk about individual muscles later.)  This means there is no single “pivot point” for the front leg relative to the body.

Here is a great site with excellent classical anatomical drawings.  Click on the Browse Veterinary Anatomical Illustration link and the horse pictures are on the first two pages.  Click on a picture to get a larger view.  You can make them larger yet by clicking on the bigger boxes under the picture.

Warning – dissection pictures ahead!!
Only muscle and bone though, so if you can deal with raw meat, you’ll be OK. 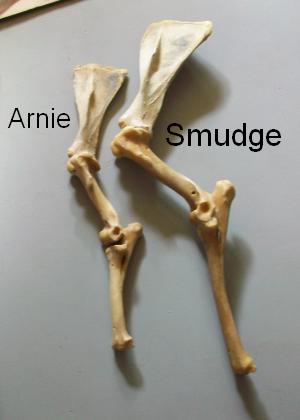 Prior to taking Arnie apart and putting him back together again, we had the opportunity to dissect Smudge, a pony sized mule.  The dissection pictures and most of the pictures of individual bones on this blog will be of Smudge.  While she is still smaller than a “normal” horse, she is much larger than Arnie, who was a true miniature. 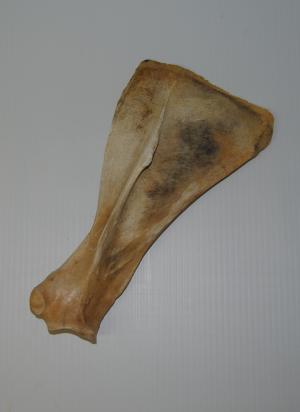 The scapular spine doesn’t actually run down the center of the scapula.  It is set more towards the front.  And since the scapula is V shaped, it matches neither the angle of the front nor the back of the shoulder blade exactly, though it is a lot closer to the front than the back.  This is the left scapula, if you haven’t figured that out already.

You can feel this ridge easily on the horse and even see it quite easily at times, depending on muscle definition and fat cover.   Can you pick out the front of the scapula and the spine of the scapula on this horse?  (The front piece of brown tape is where the owners could feel the back of the scapula.) 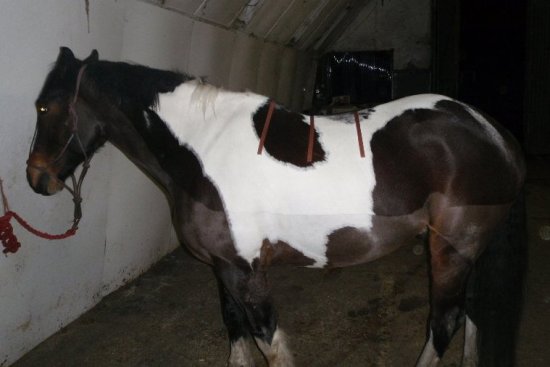 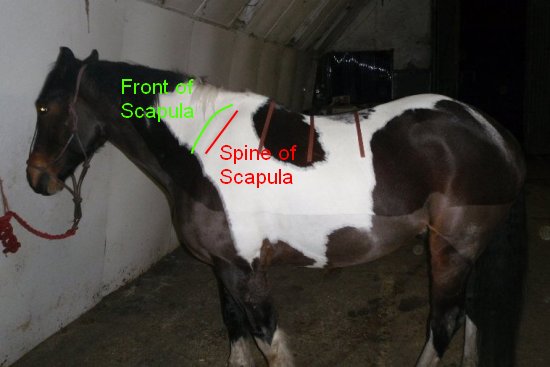 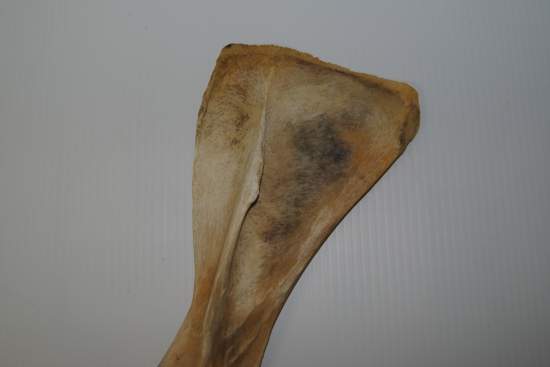 You can see that the top of the scapula is fairly flat, but it has a really rough edge to it.  This is the attachment point of the scapular cartilage – a “cap” on the top of the bone.  Cartilage doesn’t survive the skeleton preparation processes, so you never see it in photographs of real skeletons.  It is long gone. 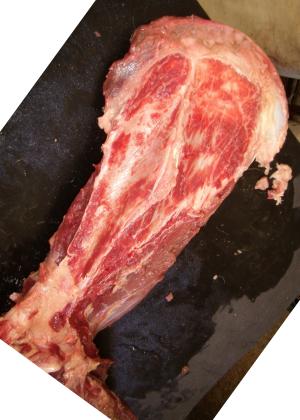 This is the same bone as in the above pictures during the dissection process.  You can see how the cartilage goes around the whole top edge of the bone.  It is very round and smooth.  A lot of anatomical drawings show the cartilage as being much larger comparative to the bone, but this is the size it was in this one.  There is a lot of variation in anatomy! 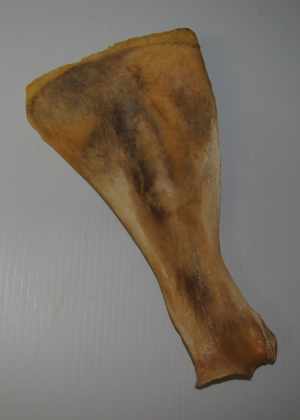 The shoulder blade is fairly flat on its medial side – medial meaning closer to the middle, which is how I remember that term.  This picture is of the left scapula, taken as if you were inside the horse looking out. 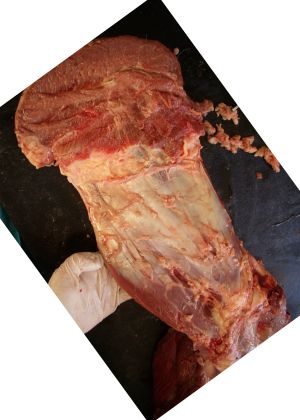 This picture is oriented the same as the one above.  The muscles on the top that are cut are the main ones that create the “sling” that supports the horse’s body.  They attach to the upper third of the bone as well as to the scapular cartilage.  The white covered muscles below them move the shoulder joint, but don’t attach to the body. 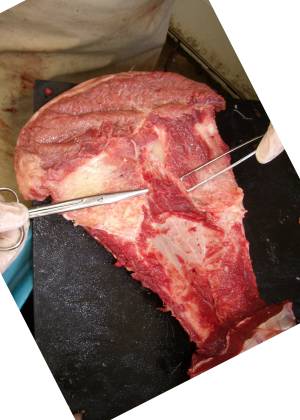 So that is a little bit on how the foreleg is attached to the body.  Now, how does it move?  Stay tuned…

Oh, and here’s some more pictures to practice seeing the spine of the scapula versus the front of it.  Once you develop your eye for this, you can quickly pick out pictures on the internet where the scapula has been superimposed incorrectly over a horse.  You can also visualize where the front of the bar of a tree is probably sitting relative to the shoulder blade on a saddled horse. 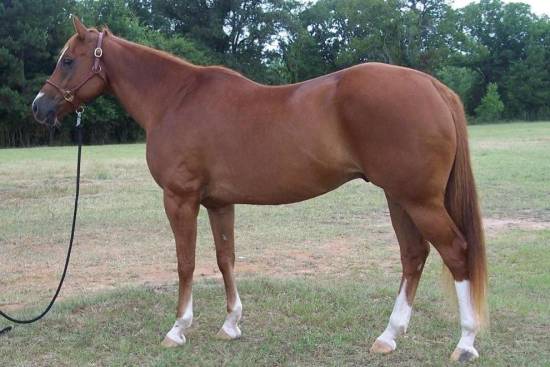 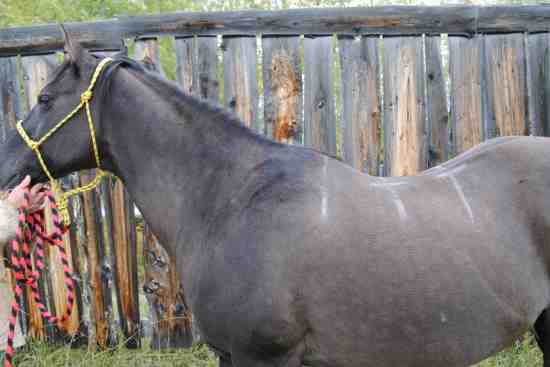 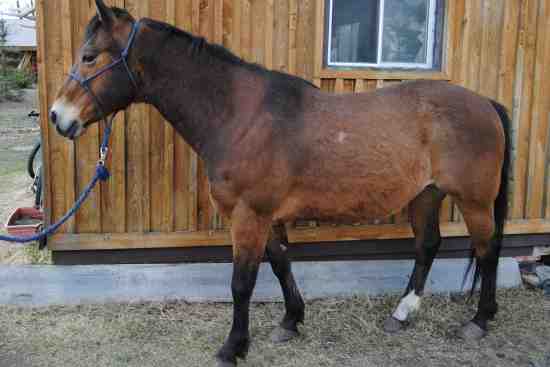 How did it go?  Could you find them?