Boil and bubble and jigsaw puzzles 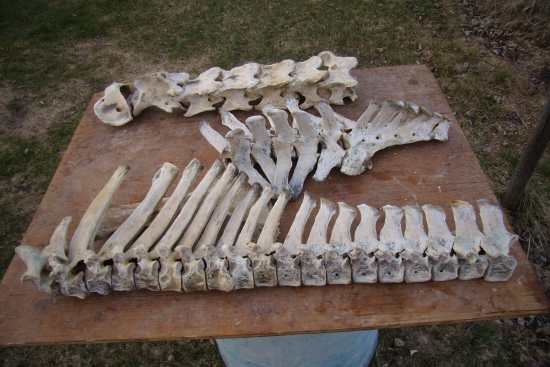 We acquired another equine spine this past month - this one from a full sized horse which belonged to a good neighbour of ours.  He was a seven year old gelding that was halter broke but untrained past that stage.  Unfortunately, he connected with a long stick that went where it shouldn't have, and thus we had the opportunity to have more "hands on" learning about equine spines.  (Rod wouldn't let me take the whole skeleton this time...) 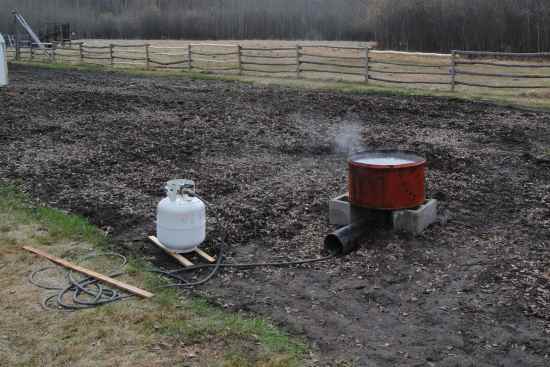 The first step to preparing the bones, once they were removed from the carcass and as much meat cut off them as possible, is to boil them to get all the remains of the meat and cartilage off them.  This takes16 to 24 hours of boiling time, even if you clean them off as best you can with a knife about 8 hours into it. 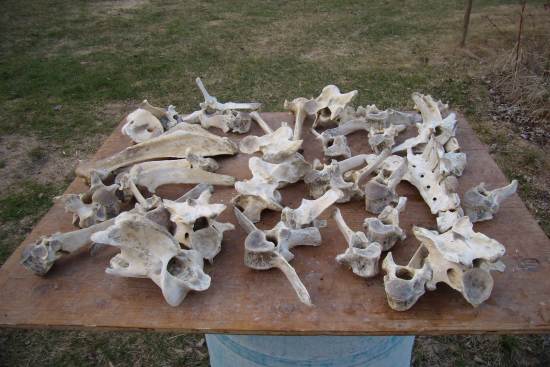 Once they are clean, they need to dry well - and that also takes time.  Sitting out in the wind and the sun is a good way to do it.  But then you have all these bones that are mixed up.  How do you figure out which ones go where? 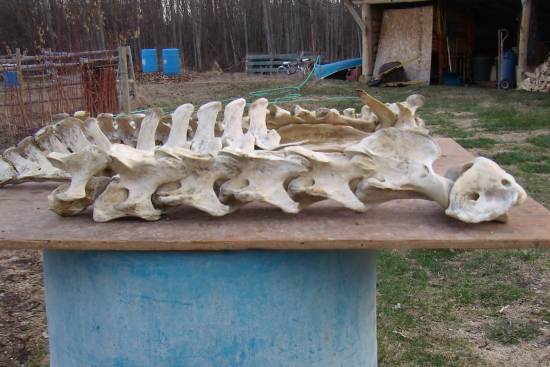 Well, the cervical (neck) vertebrae are easy.  The first two are very distinctive, and past them they get shorter and taller as they go back.  Besides that, as you play with them, fitting them together, you really can tell if they match or not.  There is enough difference in angle and shape of the articular processes that you will know if you got them right or not. 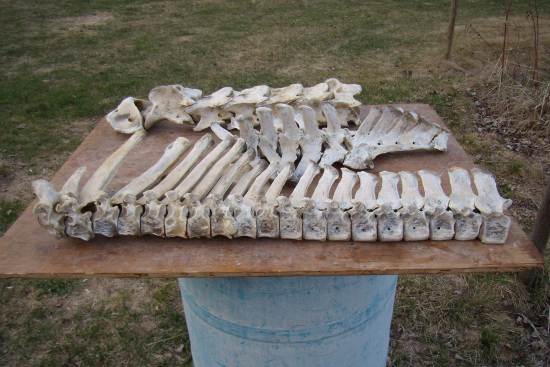 The thoracic vertebrae are the hardest to tell, but even they are pretty easy.  The first one is very distinctive.  Then the spinous processes get taller to T4 or T5.  Back of that they gradually decrease in size so you can put them in order according to spine height.  Although T2 and T3 are shorter, you can tell they don't belong that far back because of how wide the processes are.  Once you get to T13 or so the heights don't change much anymore, but you can still put them together by looking at the angle of the spinous processes and checking to see if they fit where you think they do or not.  So now you have all 18 thoracic vertebrae in order.  But wait a moment - are there only 18?

Nope, this horse also had 19 ribs!  When we were dissecting out the bones I noticed that the last rib was shaped wrong.  While it should have been narrow and smaller than the other ahead of it, it was very wide where it joined the vertebra.  We didn't dissect out the ribs.  We just cut them off short close to the vertebrae with pruning loppers, and once we had the spine out I counted and sure enough, there were 19 ribs. 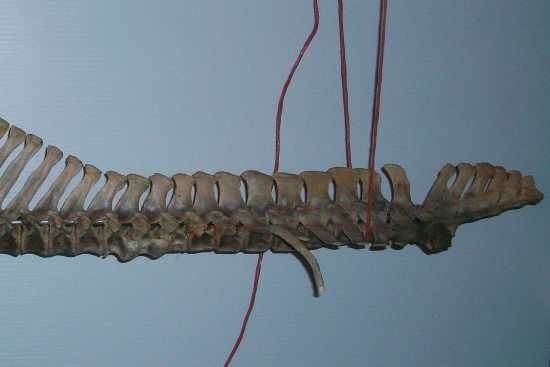 We had counted 19 ribs on Arnie too, but when we boiled out his bones, the last "rib" wasn't a rib but a modified lumbar transverse process.  So I wondered if this one would be the same. 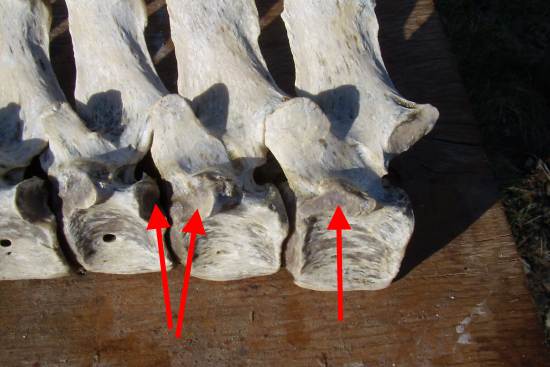 No.  Why should the anomalies be the same?  This was a separate rib, but it was attached differently than normal ribs.  While true ribs are attached between the vertebrae so there is a connection point on each side of the spinal disc space, on this one the rib joined to the middle of the vertebra where the lumbar transverse process normally comes out.  So same position, but a separate bone this time.  Interesting... 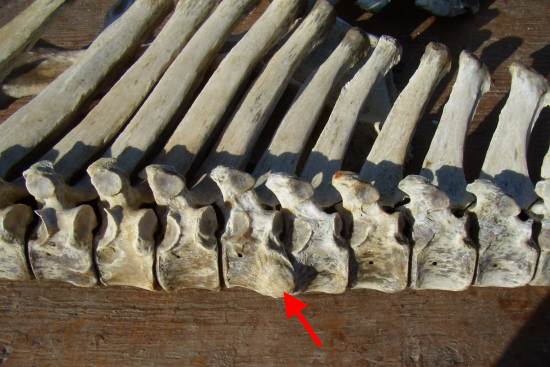 Another interesting thing we found was the extra bone production on the bottom of T8.  Arnie had 3 thoracic vertebrae fused, but he was old and had been in at least one wreck during his life that we knew of.  This horse was unbroken and we don't know of any wrecks - at least not in the last 3 years.  So while the bones were still separate, there was a lot of bone growth there.  Why? 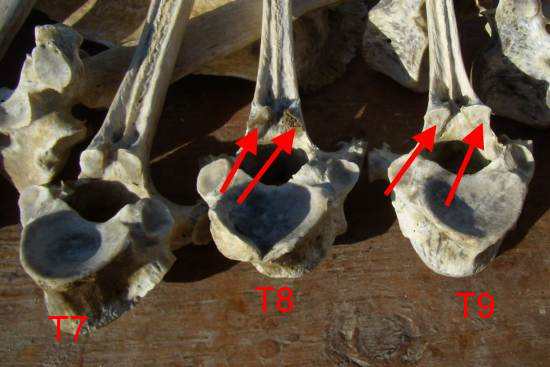 The answer was found in the articular facets that are on the spinal arch.  The ones on the back of the vertebrae face downwards and when we compared the ones on T8 to the others, they didn't look quite as nice and smooth and normal. 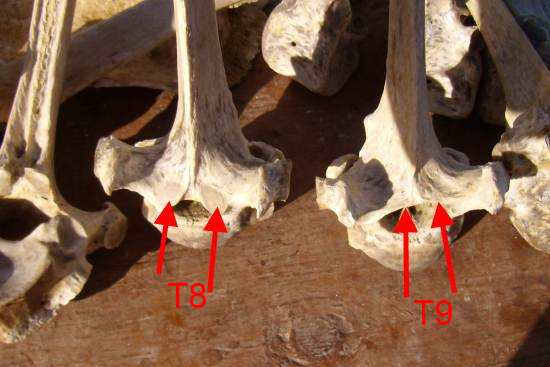 But the difference was really on the upward facing facets at the front of T9.  They didn't exist!  The joint between the vertebrae had to have been unstable without them.  Thus, the extra bone growth was probably as result of the body trying to stabilize that area of the spine. 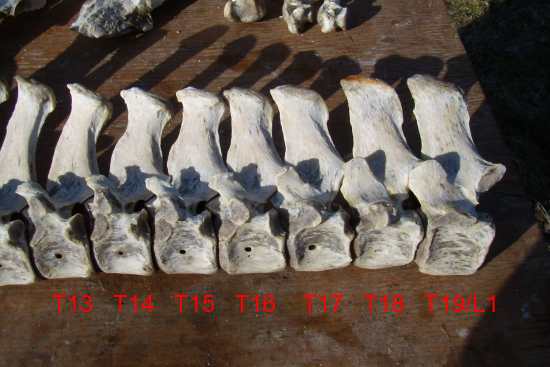 The question of which vertebra is the anticlinal vertebra (the one that doesn't incline either way but goes straight up) is always interesting.  We figured that on this horse it was T16, putting him in the majority there.  (T15 can also be the anticlinal vertebra.)  But we had to look a bit to figure out what we thought it might be.  It isn't as obvious as you may think it should be. 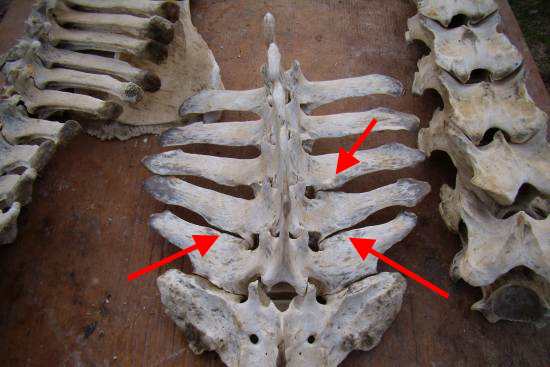 Moving on the lumbar spine, we are short one (5 instead of 6) unless you consider that there was no T19 but a modified L1.  Going with the latter, so pictured here are L2 to L6, you can see the joints between the transverse processes between L5 and L6, as normal.  But this horse also had a transversal joint between L4 and L5 only on the right.  Arnie had no joints there.  Smudge had joints on both sides.  This horse just had a joint on the right, and apparently it isn't uncommon to have a joint only on one side.  So this doesn't fall into the "anomaly" category.  Just the "interesting" category. 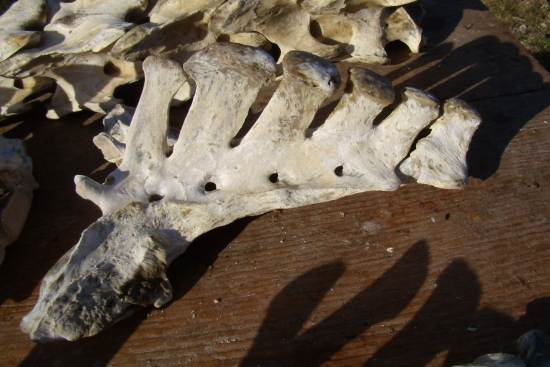 OK.  Continuing on back to the sacrum.  Surely things are normal here... Nope again!  Rather than the normal 5 vertebrae stuck together to make the sacrum, this horse had 6.  His first caudal vertebra was connected to the sacrum.  In a study done on 36 TB racehorses (1), 36% of them had this anomaly, so it isn't unusual, but it isn't normal either. 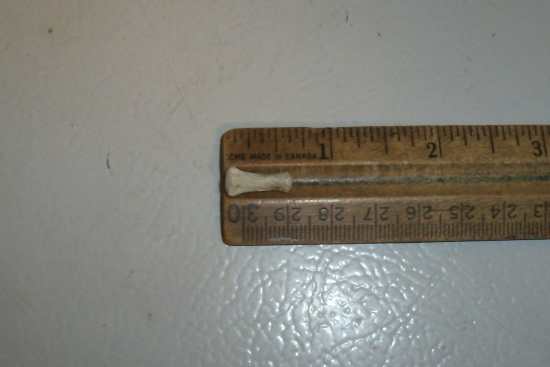 This left 17 separate caudal (tail) vertebrae (18 - 21 are "normal" numbers) with the last one being just over 1/2 inch long.  However, it also has a bulge at the bottom end, so maybe I missed one after that - or maybe not.  If I did, it must have been very tiny!

I always find it interesting looking at these things and seeing the differences between the vertebrae as you move down the spine.  Every one is different it some way.  The more I learn and the more I see, the more convinced I become that there is absolutely no way all this "just happened".  There is a designer, and the Bible tells us His name.  Colossians 1:16 is talking about Jesus and says "For by Him all things were created:  things in heaven and on earth, visible and invisible, whether thrones or powers or rulers or authorities; all things were created by Him and for Him."  It is a good thing to personally know Jesus, the Creator of the Universe.