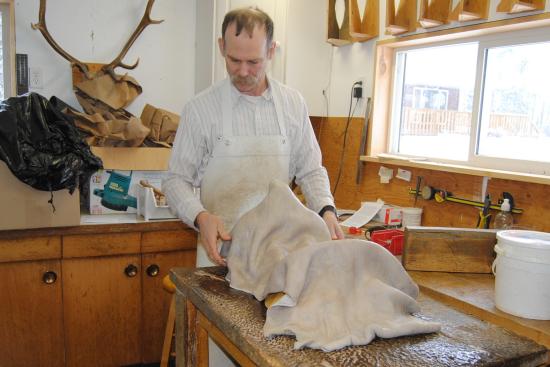 This week, Rod built four trees, and today he rawhided a couple of them.  They are for a husband/wife combination. 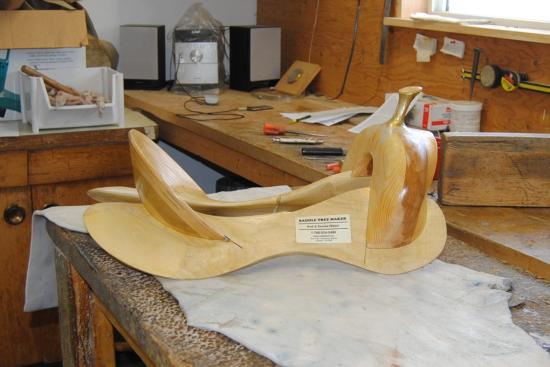 Hers is a barrel racing style tree... 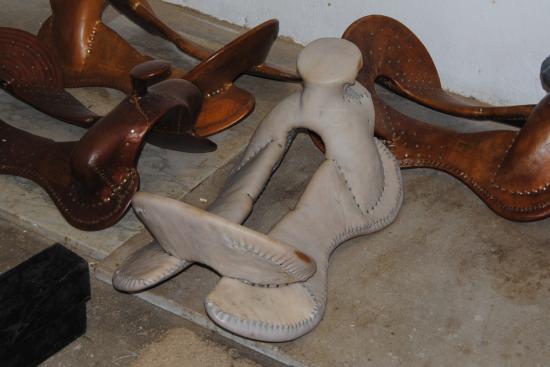 and his is a Wade.  By the way, freshly rawhided trees are at the ugliest stage of production.  They look like everything is overly bulky, the seams will never flatten down and the horn especially will never look decent.  But they will turn out just fine because all the trees look this way when they are newly rawhided.  It just takes a lot of babysitting them as they dry to turn out a nice, smooth tree. 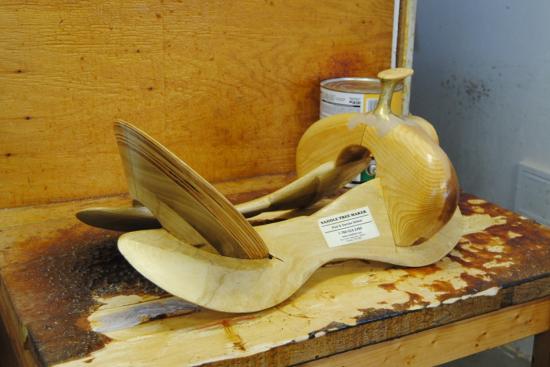 The other two trees will be rawhided on Monday.  One has the 15" wide fork that I mentioned in the post about special requests. 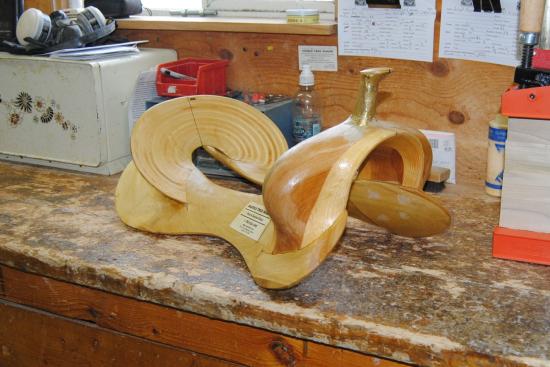 The other is a small Modified Association.  It is small because the fork is only 12" wide.  It is also small because it is a very narrow tree to fit a very narrow body type.  For those of us used to today's quarter horse types, a 3 1/2" hand hole at 87 degree bar angle sounds ridiculously narrow, and it would be for most of what we see in the fields of Western Canada now.  But when you look at historical pictures, and then look at the trees in 100 to 150 year old saddles, that was a pretty typical size.  And when you start looking at body types of horses more commonly used in the English riding world today, there are a lot of really narrow (though not necessarily small) horses out there.  Some of these owners want to ride in western saddles and, not surprisingly, have a really hard time finding a Western saddle that will work well on their very narrow horse.  So - we built one... 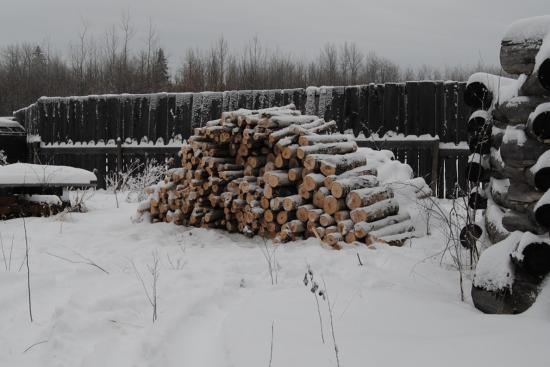 The reason those last two won't be rawhided till Monday is this.  Over the past eight days, we have taken four afternoons to get firewood for next winter. 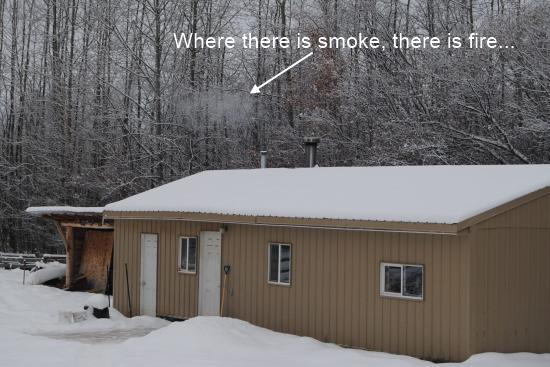 We have a smaller wood burning stove in the shop that helps heat it during the day, though the furnace kicks in overnight so the glues, etc. won't freeze. 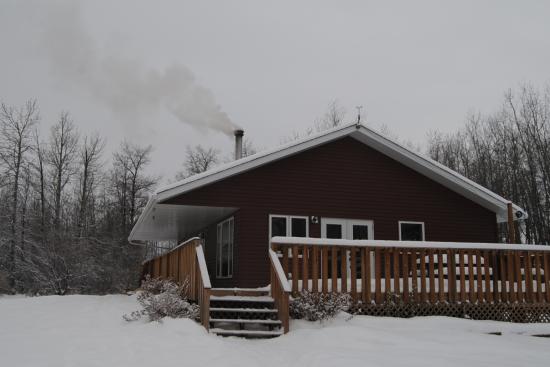 But we also have a really nice wood burning stove in the house that provides the majority of our heat, though we have a furnace as back up when needed.  And while we certainly burn all the scrap wood from the trees, it is nowhere near enough to keep the wood stoves going all winter.  So, we need firewood. 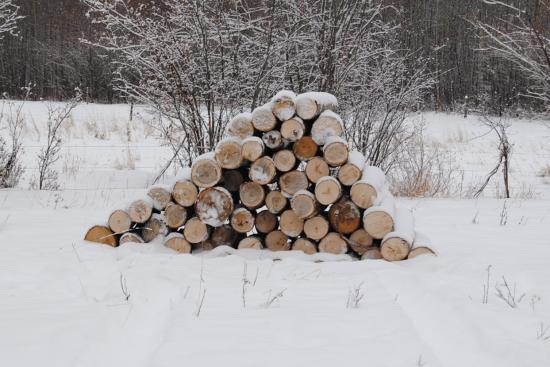 Getting wood close to us isn't an issue, since we live where there are lots of trees (note background on all outside pictures).  But getting the wood always involves physical work of some nature, and this year was no exception.  It was easier than normal, though, because this past summer there was a lot of land in the area logged as farmers were clearing bush to make the land more usable.  We got this load of poplar from individual logs that had been discarded in the ditch by one logging company as they tightened up their loads prior to going on the highway.  The company was going to come and clean them up, but our friends who were having the land cleared offered them to us as firewood if we would come and get them.  Hmm.... Logs, in the ditch, next to the road, already limbed and cut to shorter lengths.  Sure!!!  We'll take them! 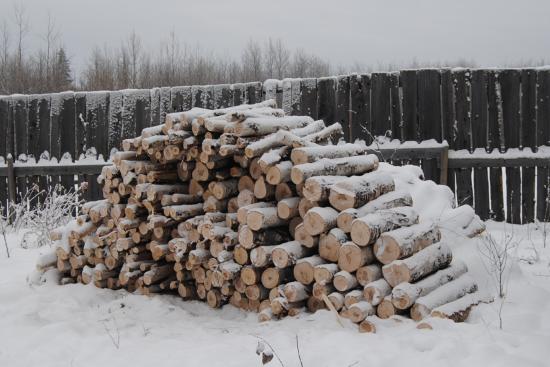 The rest was more difficult to get, but only because hauling 3 1/2' long sections of logs in a small sled over branches, bark, small logs, etc. to the "road" where the truck was took a lot of work.  The rest of it was pretty easy.  One area that has been logged is literally across the road from us.  The logging company was going for aspen poplar, so they left the occasional trees that were other species, and one of those species was birch.  Now birch doesn't grow really well here.  An 8" tree at the base is a big one, and a lot die and rot at as small as 3" diameter.  But hey, birch firewood free for the cutting (the owner gave us permission to take anything we wanted since he is trying to get the land suitable for farming) we'll take that too!  So we did. 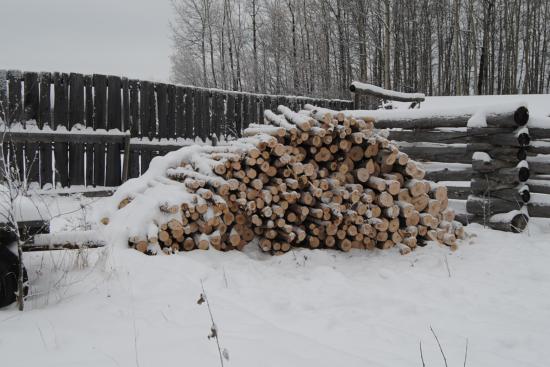 And now, there are eight full pickup loads, waiting for next spring to be cut into the right length, split and stacked into our shed.  We have discovered that splitting one load a night works well.  (Rod really likes the hydraulic splitter over the old splitting maul!)  So for a few afternoon's work in the fall and few evening's work in the spring, we have wood.  Is it really economic?  Hard to say when you count in labour.  But we keep our house a lot warmer with wood heat than with the furnace running, and that is definitely worth it!!