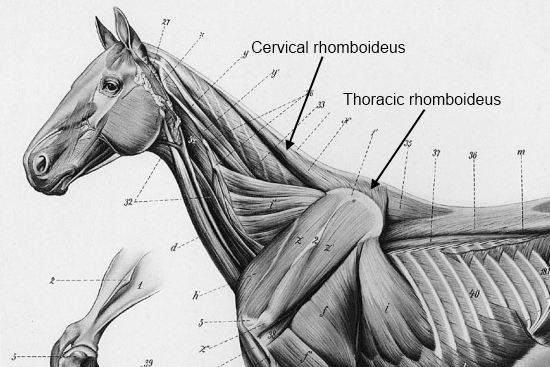 Also called the rhomboids, this muscle is the next in the line of muscles I am talking about that attach the front leg of the horse to its body.  Unlike the previous muscles we have talked about, this one doesn't lie over the shoulder blade, or even under the saddle.  But it is still important. 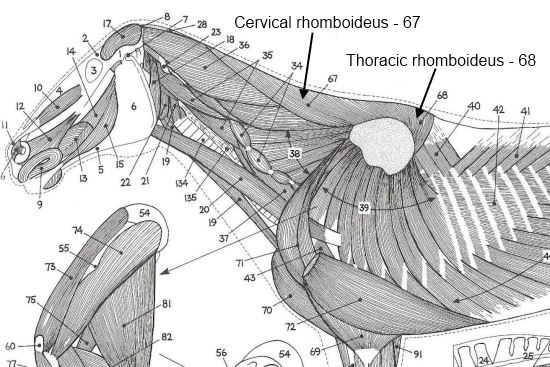 The rhomboideus muscle is a deeper muscle, lying underneath the trapezius muscle.  It has two parts.  The cervical (neck) part comes off the nuchal ligament.  It starts as far forward as C2 and goes all the way down to T2.  The thoracic part runs from T2 to T7 and attaches to the dorsal spinous processes via the enlarged section of the supraspinous ligament that overlies them at that section of the spine.  So it ends ahead of the saddle. 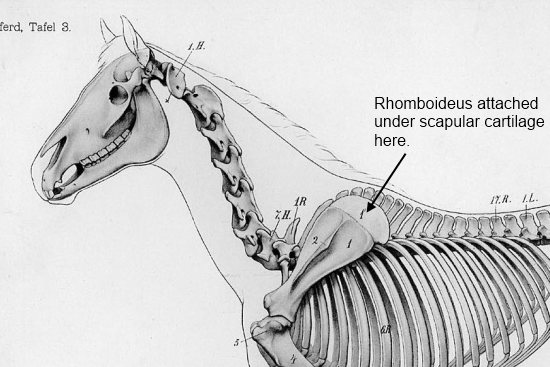 So, since it is ahead of the saddle, why am I even talking about it?  Well, because of a theory I have heard that makes sense to me, though whether it is real or not I'm not sure. 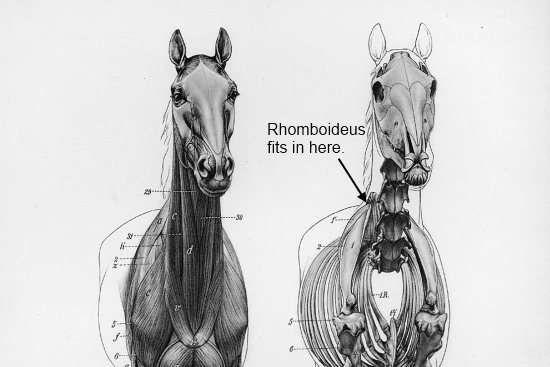 As you can see in this picture, the scapula isn't vertical.  It follows the rib cage and it is tilted with the top closer to the midline of the horse.  Since the rhomboideus attaches underneath the scapular cartilage, contracting it will act to pull the shoulder blade in.  So if there are problems with the shoulder blade hitting the front of the saddle, the rhomboideus would be one of the muscles the horse uses to avoid the discomfort or pain.

What happens when you use a muscle a lot?  It gets bigger!  What would happen if you increase the size of the rhomboideus underneath the scapular cartilage?  It would shove the scapula out to be more vertical since it would take up more room between it and the spine.

Think about pictures you have seen of damaged horses.  The trapezius and latissimus dorsi behind the scapula are atrophied due to long term excess pressure.  And the shoulder blades stick out a lot from the horse.  Is this sticking out just because the muscle behind them is gone?  Or is it because the top of the shoulder blade is held out from the horse more too because the muscles underneath it have hypertrophied (enlarged) due to long term use trying to move the shoulder blade in towards the body?  I don't know the answer for sure, but it is an interesting question, isn't it?  If this is true, it makes it even harder to fit these horses, and all the more important to prevent the damage in the first place by having well designed saddles, and allowing them to be in the correct position. 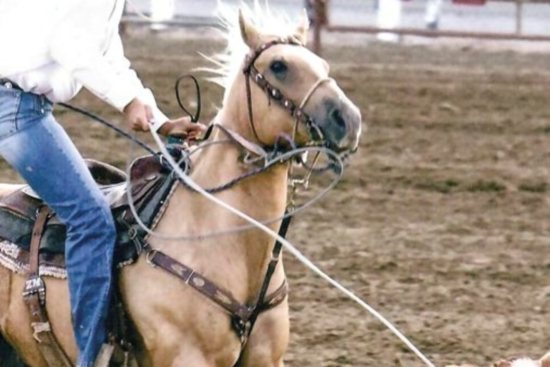 Another area, not related to saddles but still important, is how this muscle is affected by the use of a tie down.  (Disclaimer - I just snaffled this picture off the net and I have no knowledge of the horse other than that it is wearing a tie down.)  Since the cervical rhomboid acts to elevate the neck when the leg is weighted, it is one the horse uses a lot if it is trying to lift its head against the constraints of a tie down.  So a lot of arena rope horses that are consistently used in a tie down will have a very enlarged cervical rhomboideus - an extra thick roll of muscle at the top of the neck - but some of the other neck muscles won't be well developed.  Just something else I have heard.

But there are still more muscles to talk about...