Home > Saddle Tree Blog - From Shop and Desk > How did you get started building saddle trees?

How did you get started building saddle trees? 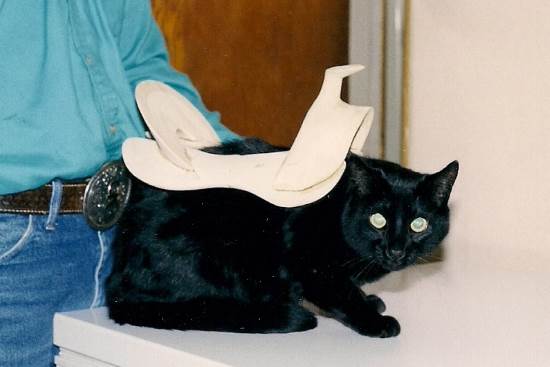 This is a question Rod gets asked not uncommonly. After all, this really is a rather niche profession and a very niche market. Why would someone want to be a tree maker and what is our story behind doing this for a living? Well, we started small...

Actually, it all started back when Rod was working as a cowboy and got his first custom made saddle from a really good maker named Julian Tubb. He took his brand new saddle and went out working for the spring season at Douglas Lake Ranch. And as he rode long days and big country, he couldn’t keep his saddle straight. It was constantly tipping to one side. Not safe, not comfortable, and not good for the horses.

Finally he sat down and did a really close examination of the saddle, only to discover the tree wasn’t square. He sent it back to the maker, borrowing a saddle to finish out the season at Douglas Lake. Julian ripped the saddle apart, examined the tree more closely, and apologized up, down and sideways for missing the fact that the bars were set at two different angles on that tree. At that time, in the mid-1980’s, Julian was sending back two out of three trees he was shipped because he wasn’t happy with the quality. But somehow he had missed this in his examination prior to building the saddle. A replacement tree was ordered and the saddle rebuilt. After that, the saddle sat square. But it had caused problems for Rod in his riding job, and cost the saddle maker time and money in replacing the tree.

A bit later, Julian decided he had had enough with poor quality trees. He was getting a few hand made trees from Todd McGiffin and he really liked them but Todd wasn’t able to build enough to keep him totally supplied. So he went to Todd to learn to build trees. He set up his shop and started building trees for himself and for a few other customers. Once he got his equipment paid off, he pretty much quit building for other makers and just built for himself. So he was finally happy (or as happy as a perfectionist type can be) with the trees he was building on. 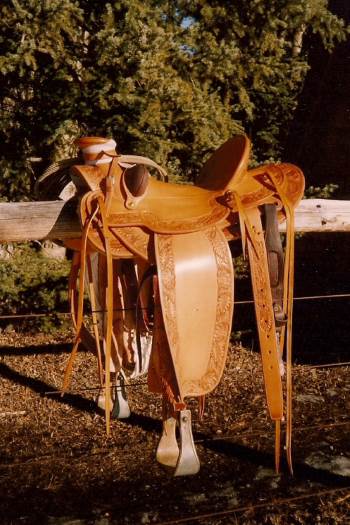 When Rod learned that Julian was building his own trees, he ordered a new saddle with a Tubb tree in it and sold the one with the production tree. The first time he stepped into the new saddle, he could tell the difference in trees. The saddle didn’t move. It was solid on the horse because it matched the shape of the horse’s back with more surface area. As he used it over the years, it worked well on a wide range of horses, and stood up to hard use. We’ve still got it.

Rod lived around the same area as Julian at that time and hung around his shop a bit. He watched some trees being built and a seed was planted: “That’s something I could do some day…”

Fast forward a few years. Rod had worked with horses and cattle on a few different places. We met and married. The idea of building trees kept percolating in Rod’s head to the point that he eventually even mentioned it to me. (He’s a “think a lot before he talks” kinda guy…) But he still wanted to cowboy, so he left the ranch job we were at and got a job at a PFRA (Canadian Government run community pastures) in southern Saskatchewan. This meant he had a riding job for the summer at least. But when he talked with Julian about the idea of riding for the summer and building trees in the winter, Julian told him that it wasn’t likely to work well. When a guy calls to order a tree in May, he doesn’t want to hear “I won’t be building anything till October”. (That is different than "I won't be building yours till October because I have others ahead of you.")  Julian didn’t think that business model would fly. So the trees got put on hold again.

Working riding jobs can be really good or not so good (putting it mildly) depending on the boss. After the summer at that PFRA pasture, Rod was thinking that working for himself might be a real good idea… So we started seriously looking at the option of setting up a tree shop and seeing if it would be a viable way of making a living. This was in 1995. I was working full time as a vet in a mixed practice, so we had a stable income while Rod was setting up the business.

When we first told my parents about the idea of Rod building saddle trees, there was a silence on the end of the line. Then came my mother’s quiet voice. “Can you make a living doing that?” I grew up in the city, though both my parents were farm kids, and the thought of their daughter being supported by doing something as obscure as building “saddle frames” was a bit scary for them to contemplate. But being the supportive parents they have always been, they backed us and helped us get up and running. Their support over the years in so many ways has been invaluable to us. (Thanks Dad and Mom! We love you.)

In November of 1995, we moved into Weyburn, Saskatchewan, a “city” of about 10,000 people, into a rented 540 square foot house one block off main street. We lived there for two and a half years. It just about killed Rod to be in town, but it had a 10 x 14 shop with a heater in the back yard and good neighbours.  It was within walking distance of the clinic I worked at, and since we only had one vehicle at the time, that worked out well for us.

In December, Rod travelled to Sundre for a week to learn the woodworking part of tree making. In January or February of 1996, he went back for a weekend and watched Julian rawhide a tree. For the rest of the winter he worked at getting the business plan set up and purchasing and organizing his equipment and materials. In March, 1996, he built his first tree.

For the next couple of years we kept trying to find a place out of town so Rod didn’t suffocate, but it was a no go. He ended up making rawhide in the back yard in town for two summers in a row. (I told you we had good neighbours…) In the winter, the trees dried in the basement as the shop was too small and cold for drying trees.  Rod decided he would work on building a good tree initially, and building them faster could come after that, and that is how it went.

Eventually we figured that since we wanted to move back closer to family anyway, we may as well look for a place in Alberta. Spring of 1998 we found our current place north of Valleyview, built the shop in June and then moved here in July of that year.

By then, Rod’s name was getting known in the saddle making circles and he had pretty much all the business he could handle by himself. I had a part time job for a few months, but by the end of the year we decided to see if the business alone would support us. I started working more with Rod in the shop, doing all the things he doesn’t. It worked well, and the rest, so they say, is history. 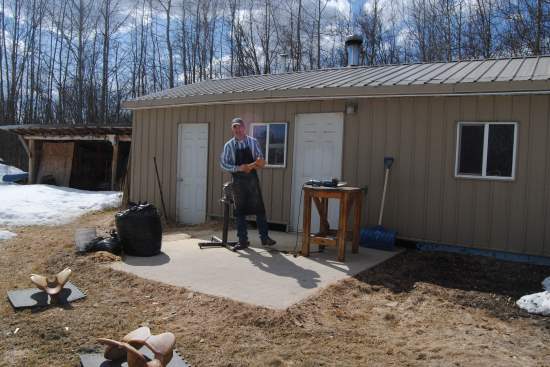 Eighteen and a half years in the business, and still enjoying working for ourselves. Monetarily we don’t fall into the “rich” category, but we enjoy life, we enjoy being here, we enjoy the job, and we enjoy working with each other. So, yeah, we’re pretty rich…