Home > Saddle Tree Blog - From Shop and Desk > The Table

Posted by RodandDenise on September 18, 2016 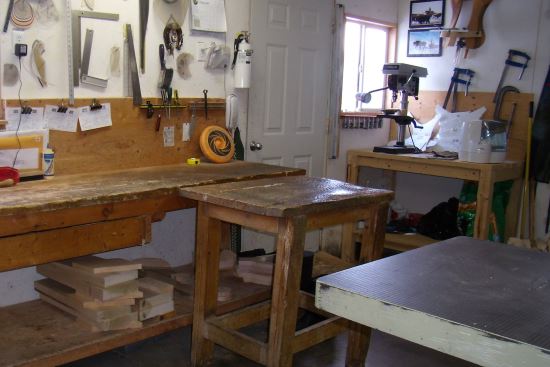 When we started the business over twenty years ago, Rod built his workbench, and the table. He built them the same height as each other so they would match, and the height chosen was the height of the table on the band saw. This way he could use either table or bench to support the end of a long board that hung a long way out past the band saw when cutting. 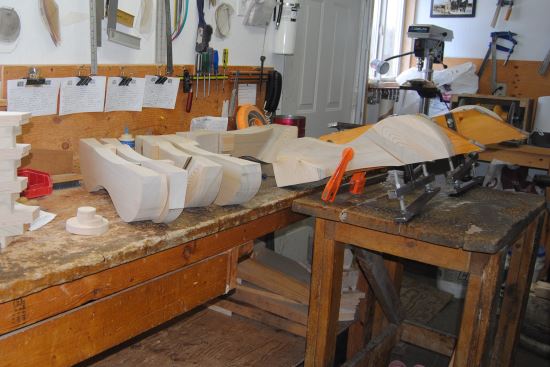 The table had many uses over the years. Originally it was the primary surface for varnishing trees until we built the varnishing bench after the addition. Often it was just extra room to hold trees or pieces of wood. It gave Rod the extra surface space he needed when cutting out a set of four trees. And so its home base was sitting by the bench close to the door. 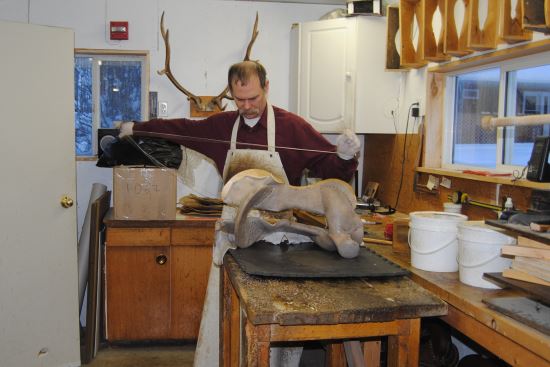 But… it got used for other things as well, and for that it needed to be moved. Inside, it was the rawhiding table. 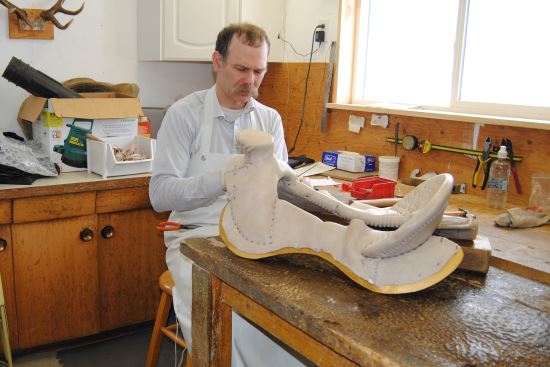 How many pictures of variations of this scene have I posted over the years? So on days Rod was rawhiding, it got dragged to the far end of the shop. 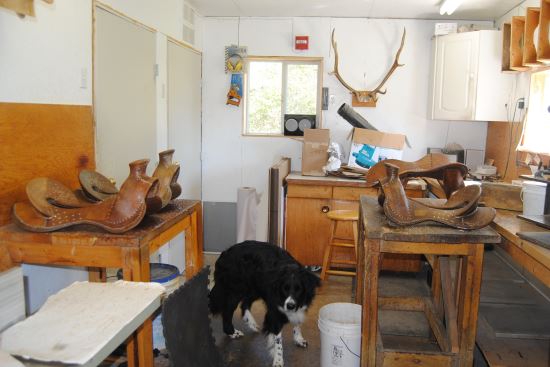 It was often an extra place to put trees that had been varnished. 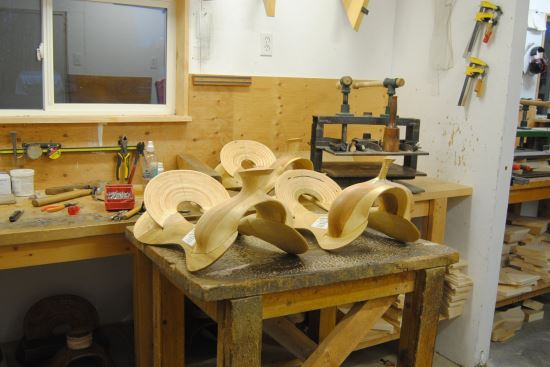 When you have four rawhided and four just built, they take up a lot of bench space. 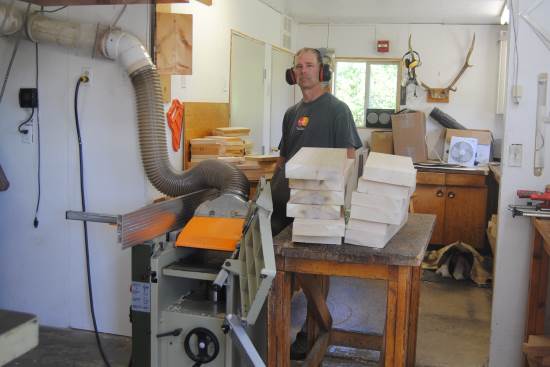 It was used when we were thicknessing as well.  One of us would stand at each end of the jointer/planer with the table beside it to hold the wood we were working on. 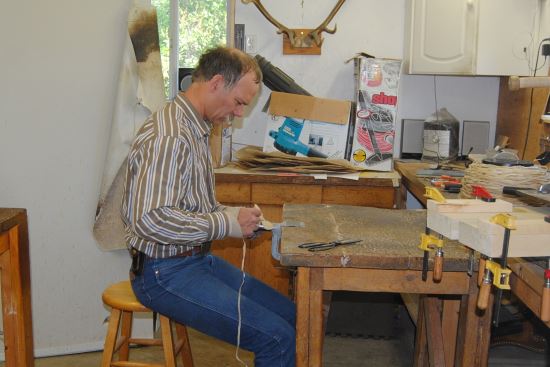 The ledge on the edge (it rhymes!!) was just right for attaching the string cutter and the table gave lots of room for the larger sections of deer hide, so it was used when we cut string. And being as the center of the shop was rather in the way, it would get dragged to the end again for this job. 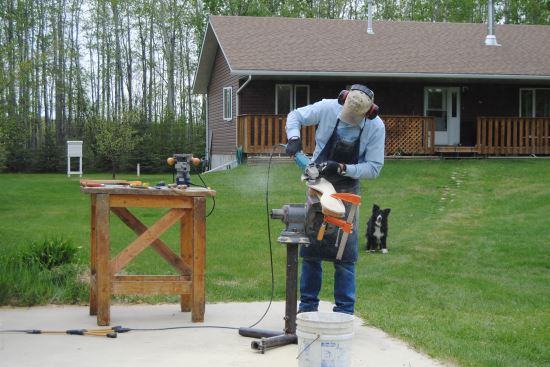 But it didn’t just get to be inside. Rod has said many times that he probably wouldn’t have been a tree maker if he couldn’t be outside as much as possible. In the winter, not possible. But in the summer – possible!! 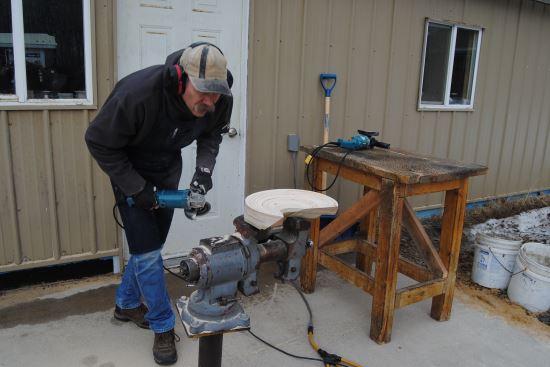 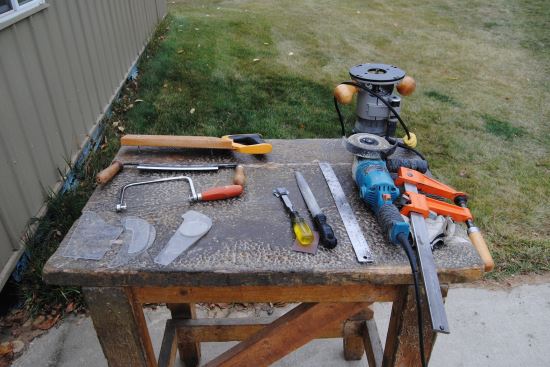 to as late in the fall as possible… (October 22nd 2014) But regardless of when it was used, the tools were always laid out oh, so neatly… 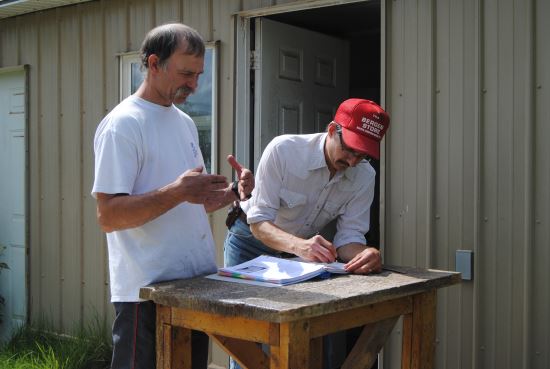 "The student" even used it as a desk… 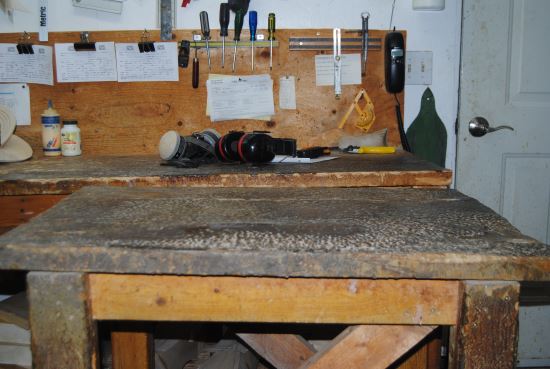 So – after twenty years of dragging it around on cement, which end do you think was the front?

Posted by Stephen on Sep 20th, 2016
Your documentation of Rod’s tree making process is endearing. I adore the visual reference of a man’s 20 career displayed in the uneven legs of a handmade table.

I once worked for a guy who owned and old mill building in Mass. that was being renovated for office space. I was helping to refinish some old wood flooring and came across an area that looked like 12” x 12” support beam from that first floor was pushing through the second floor. I actually thought the floor was sagging under the weight of the old lumber...nope. It was wear marks of a machine operator that had been walking back and forth for twenty five years at his/her station, incredible.

Anyway, thanks for sharing.

Hope you are well.

Stephen
Posted by RodandDenise on Sep 20th, 2016
Thanks for the comment Stephen. Makes me wonder what the floors in the shop would look like now if they had been wood. As it is, there are definite marks and stains on the cement in certain areas that make no sense unless you know what was done there for many years...