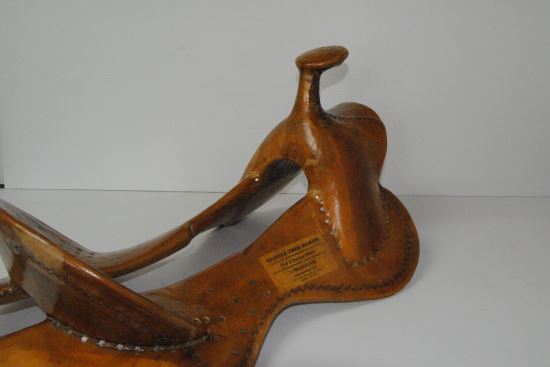 Here’s some pictures of some of the more unusual trees we have shipped out over the past few weeks amidst all the “normal” trees we have been building. 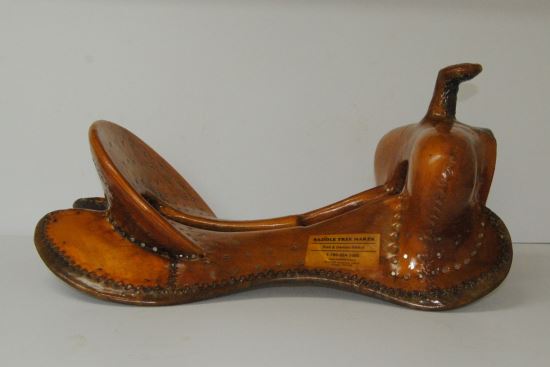 Our customer called and said his his customer wanted him to build a new saddle pretty much like an old one that he had.  He measured and said the fork was 14 ½” wide and wanted a 3 ¾” stock thickness, and then he sent us the following four pictures.

Looking at it and analysing the generally angle it was set at and the three components that go into the shape of a swell fork, we came up with the following.  We call it a 14 ½” wide CN Special.  (We have a few patterns marked “Special” with the customer’s initials in front…) 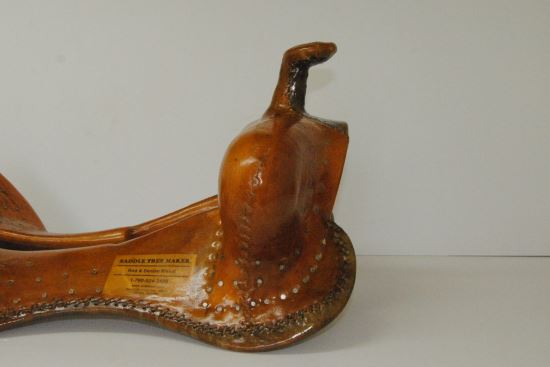 We used our normal “lean ahead” angle for it, since this is what it looked like to us in the pictures.  Part of the "all tree makers do things differently" scenario is that the angle of the fork relative to the bars varies between makers.  And, as I have also said before, when you change that angle, the universe shifts on its axis in terms of how the rest of the tree is set up.  So when doing duplicates or copies from pictures such as this, we use one of the "normal" three angles in our repertoire. 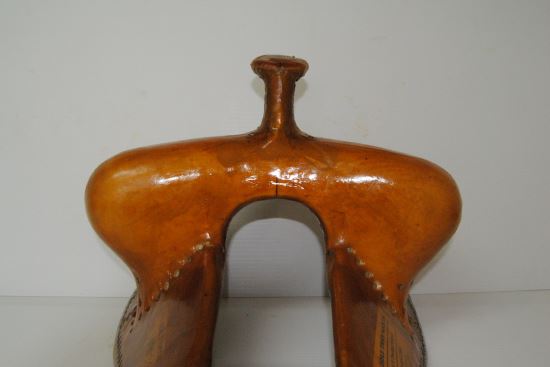 It has a relatively flat top slope, which is common for wider forks.  If the top slopes off too quickly, when it finally rounds on the side, it is too low for any kind of side cut. 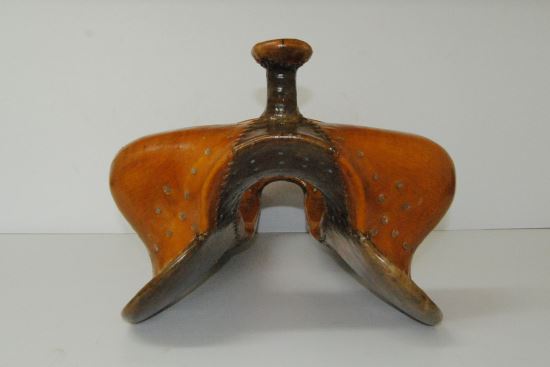 Getting the side cut right was harder.  Rod eventually modified the pattern I came up with when he was building the fork because it just wasn't looking right.  We also have to remember that there is rigging, etc. under the fork cover and try to figure out what the tree underneath all that is shaped like.  I don't think there is any way to know for sure what it will end up looking like until the saddle is finished, but I know it will be close. 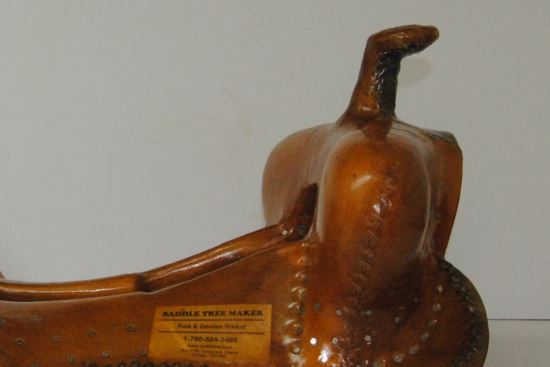 This one also had backsweep to it.  This makes it relatively uncommon as the vast majority of fork styles are flat, but it makes for a neat looking fork.  However, "light weight" isn't part of the deal when you order a fork as large as this one... 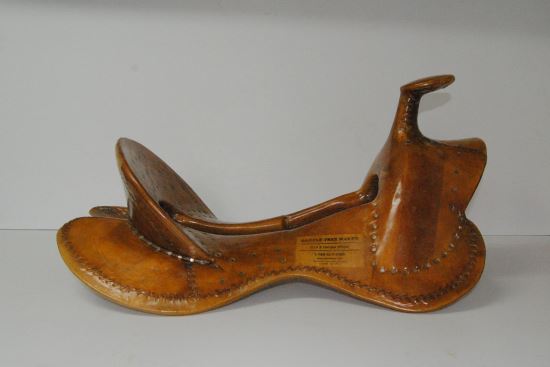 Here is a Meana style tree.  The Meana brothers built many different types of saddles, but this is one more commonly attributed to them.  The customer wanted the "old time" look of the fork and the Taylor cantle, but she didn't really want a tall cantle, so this one is only 4" high. 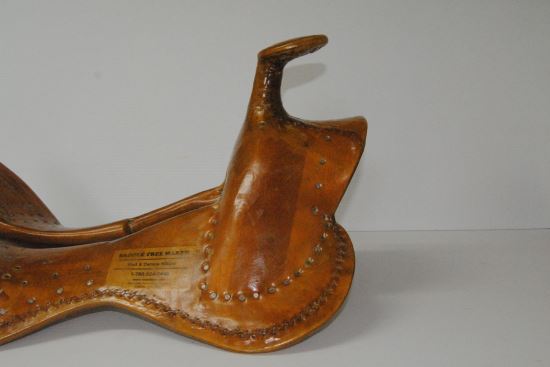 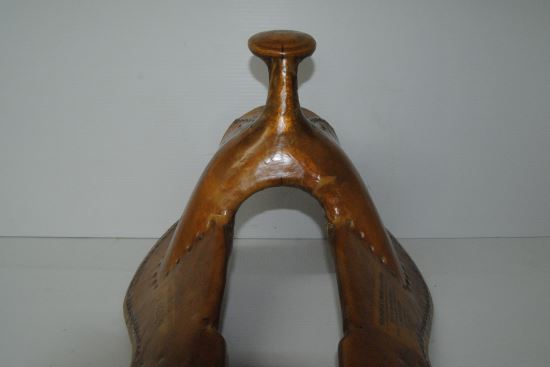 It is also very slick - slicker than our normal 8" wide slick forks.  The original Meanas were built to go on very narrow backed horses and the bars probably came down at pretty much the same angle as the fork.  In this case there is a much wider bar angle, so you can see the bars angling out more than the fork.  This is one of the things we have to deal with - figuring out how to best make the shape we want in the fork while also keeping maximum attachment area on the bars and still making it look "right".  (The angle of the picture may make the bar angle look uneven side to side, but the tree really is symmetrical.  Honest!  It is that optical illusion thing going on again...) 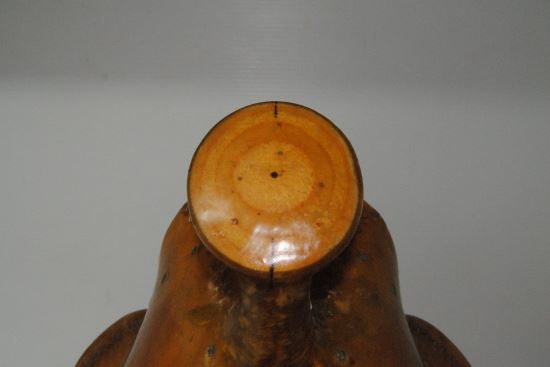 The other difference this customer wanted was an oval horn cap.  This one measures 3 1/8" long and 2 7/8" wide.  It actually looks really good with the thicker stock on this tree. 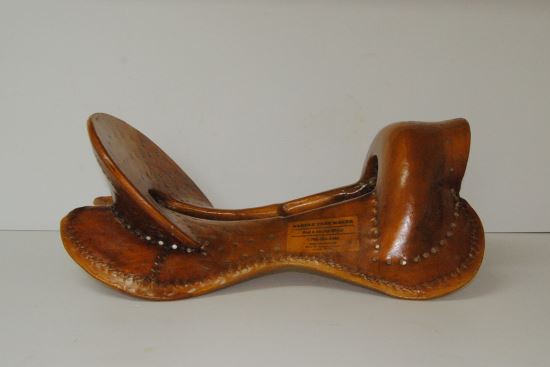 This last tree is going to be used in an endurance saddle.  We were going to build the more typical endurance fork (narrow stock thickness slick fork which is flatter across the top) similar to some pictures they had sent us.  But...  this customer had ordered a Taylor style tree before this one, and when they got it, they liked the fork so much they had us make this one the same, only without the horn.  So - a Taylor fork endurance tree was born!!

It seems that the trees I post on here are mainly the unusual ones we build, but the majority of what we build are the more common Wades, Modified Associations, Louellens, etc.  We are just so used to them going through the shop that I don't think about posting pictures.  But if anyone wants pictures of a particular style of tree, please let me know and I will try to put it up here.