Posted by RodandDenise on September 7, 2012 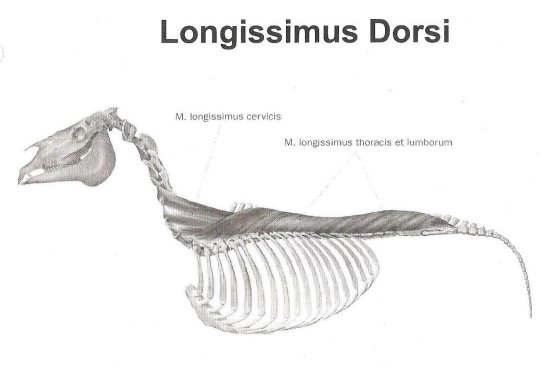 Well, I'm back to anatomy again, discussing a very important muscle of the horse's back which can really be affected by a saddle - the longissimus dorsi.  Actually, there are a number of muscles that have "longissimus" in front of them - longissimus lumboram, thoracis, cervicis, which together with the spinalis and semispinalis all make up what is often just called "the longissimus".  The longissimus is the major back muscle which runs from back to front of the horse - but not like you may think... 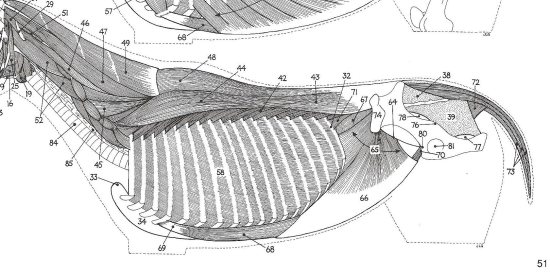 It is hard to get a good picture of what the longissimus looks like, because it is a complicated muscle.  In the diagram above, all the numbers from 43 to 47 are part of the longissimus complex of muscles.  In this picture, they look like long bands of muscle that run from back to front.  However, the first drawing is a more accurate, showing that it is actually made up of segments of muscle that only run a short way, not the whole length of the back.

Where does it attach? 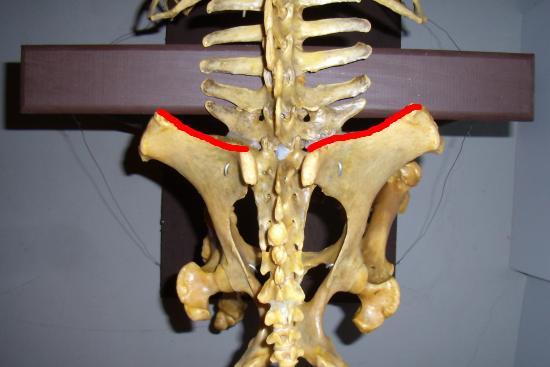 The segments of the longissimus run from back to front, with some segments originating on the front edge and the underside of the front of the pelvis. 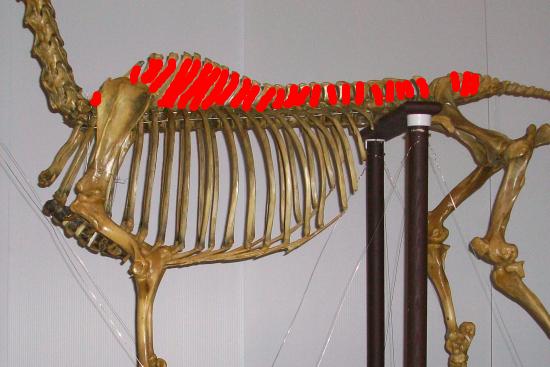 Many other segments originate on the dorsal spinous processes of the first three sacral and all the lumbar and thoracic vertebrae.  (For an explanation of the parts of the equine spine, click here.) 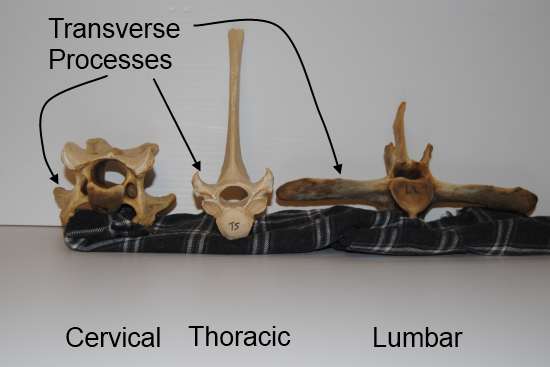 These segments can insert in different places:  on the transverse processes of the lumbar, thoracic and last four cervical vertebrae, 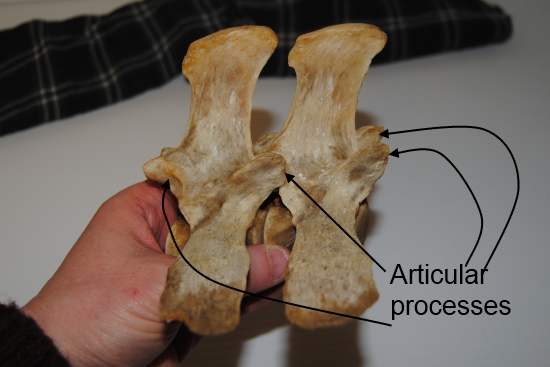 on the lumbar articular processes, 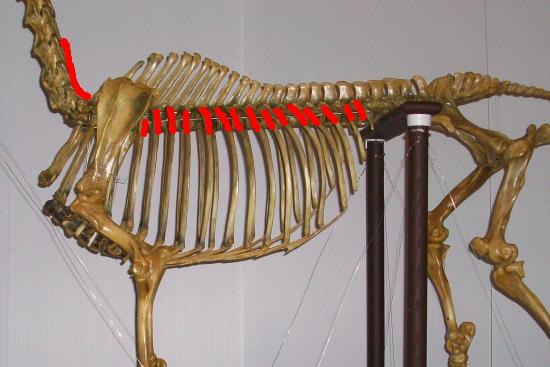 on the lateral (outside) surfaces of the ribs, except for the first, and on the dorsal spinous processes of the last four cervical vertebrae.  (For more information on what processes are, click here.)

Well, that depends on where on the spine you look.  Here are some cross sectional views.  (Please note, these diagrams are not to the same scale.) 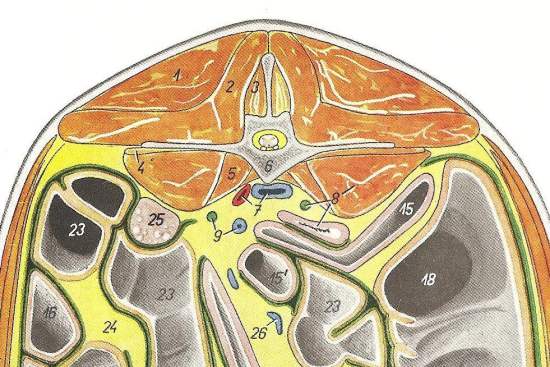 At L4, or just ahead of the point of the hip, the longissimus is an L shaped muscle (#2 on the picture above) with the medial gluteal (#1) indenting it as it sits on top of it.  Together they make up the vary large muscle mass that covers the loin at this area. 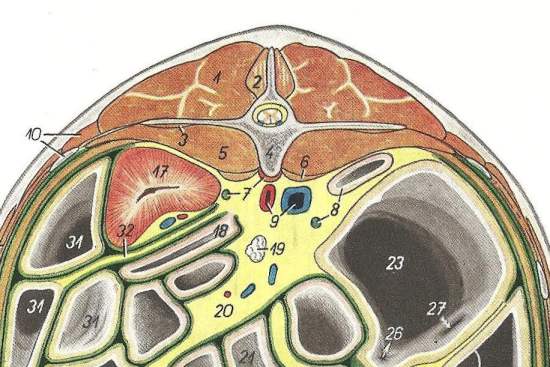 Moving forward to L2, we are ahead of the medial gluteal, and the longissimus (#1 in this picture) is a large triangular muscle sitting on the large lumbar transverse processes and fairly closely underlying the skin.  The back of the bars will be sitting on this muscle, and if the shape of the bar isn't right, the back bar tips may dig into either the longissimus dorsi here or the medial gluteal farther back. 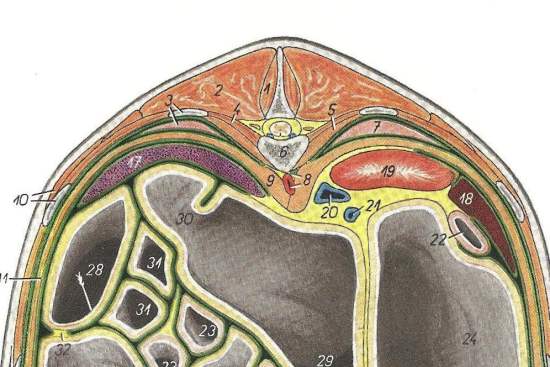 Three more vertebrae ahead (T17) and the longissimus (#2) is now sitting on ribs (#3 - top) rather than large transverse processes.  The back bar pad, probably under about the cantle, is carried here. 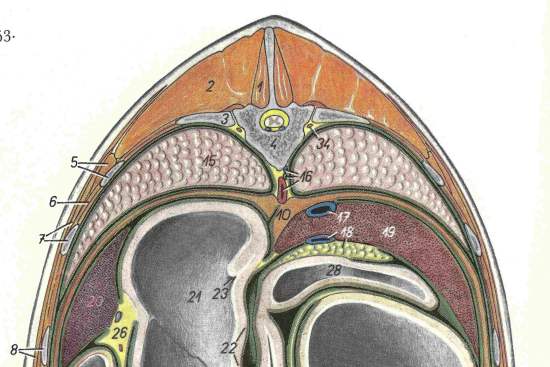 By T14, under the middle of the saddle, the longissimus is still pretty close to the skin, though the thoracolumbar fascia from which the latissimus dorsi arises is over top it, and the shoulder muscles will soon be covering it. 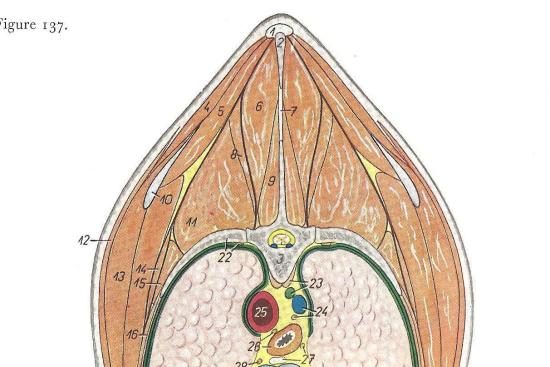 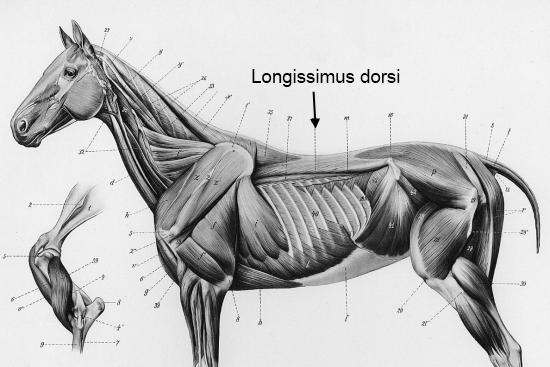 So while the longissimus dorsi is not exposed for much of its length, what is exposed makes up a lot of the soft tissue that supports the saddle.

And when you look at the profile over the middle of the back and the loin, the shape of the longissimus dorsi is what makes the difference between an A shaped horse and a rounder backed horse.  So this is the muscle that can be damaged and atrophied by too much pressure over long time periods in these areas.

While it is a major mover of the spine, there are other muscles as well that are important when talking about spinal movement.  I'll be discussing that in another post...