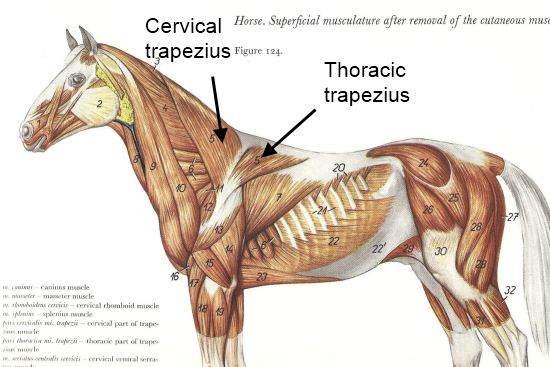 We'll start with the muscles that connect the front leg (remembering, of course, that there is no bony connection from the front leg to the body).  The first one we'll talk about is the trapezius.  This is the most superficial muscle over the shoulder blade after the very thin one that wiggles the skin, and it is important because the front of the bar of the tree sits on part of it.  It is a flatter, wider muscle, but in some horses (and mules) it can be quite thick. 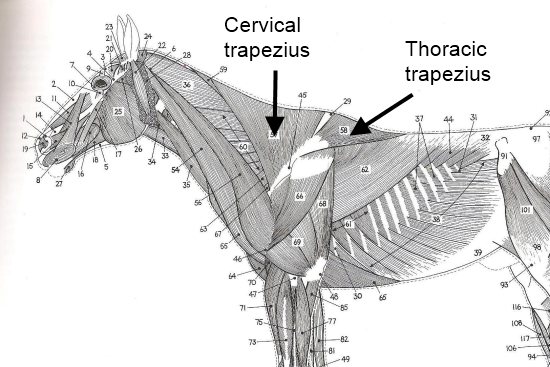 There are two parts to the trapezius - the cervical part and the thoracic part.  The cervical (neck) part originates from the nuchal ligament at the top of the neck.  It starts as far forward as the second cervical vertebra (C2) and goes all the way back to the third thoracic vertebra (T3).  Remember that T3 is the first one we can always feel, though sometimes T2 can be felt.  It inserts all down the spine of the scapula - the ridge on the shoulder blade running up and down that you can at least feel and often see on the shoulder of the horse.  So when it all contracts and shortens, it will pull the whole shoulder blade forward and upward.  Since none of the cervical part of the trapezius is under the saddle, so we won't talk about it any more.  (But when you see horses with a dip in front of their withers, you know that their cervical trapezius isn't very well developed.) 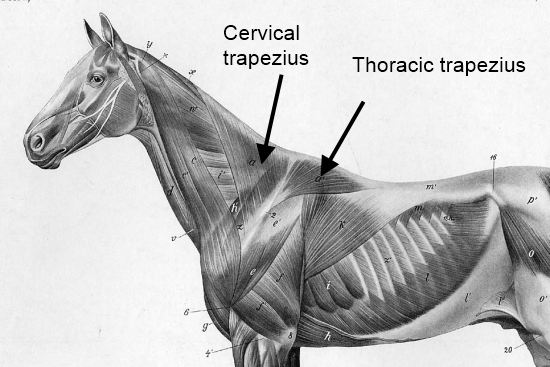 The thoracic trapezius originates on the supraspinous ligament from T3 to T10.  Since T4 and 5 are the tallest of the dorsal spinous processes, it starts well ahead of the saddle, but the back part of the trapezius sits under the fork and gullet, and therefore under the front of the bar of the saddle. 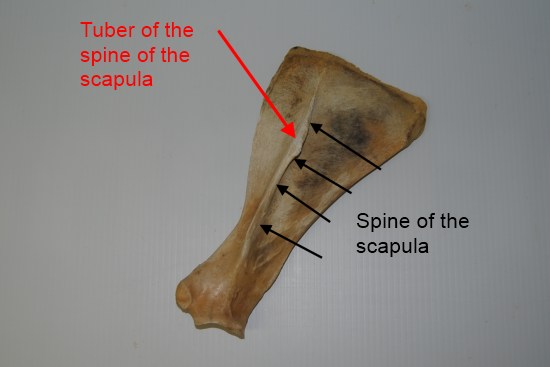 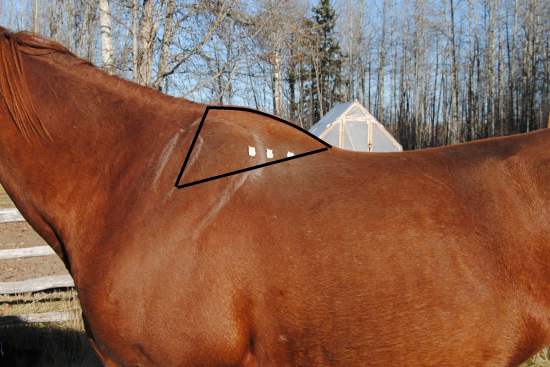 Putting the skin back on, the thoracic trapezius lies over the shoulder blade from the midline to the tuber of the scapula, which you can feel on your horse.  And you can easily see that it is one of the muscles that would be squished if the saddle was placed too far forward and held in place with a breast collar, or if for some reason the last bit of the shoulder blade couldn't slip under the front bar tip as the horse is fully extending his front leg.  It is also in a position to be harmed by saddles that are too wide - bar spread or angle - so that the top of the bar tip digs into the horse. 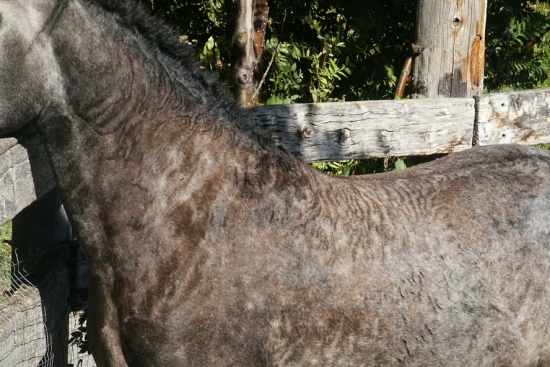 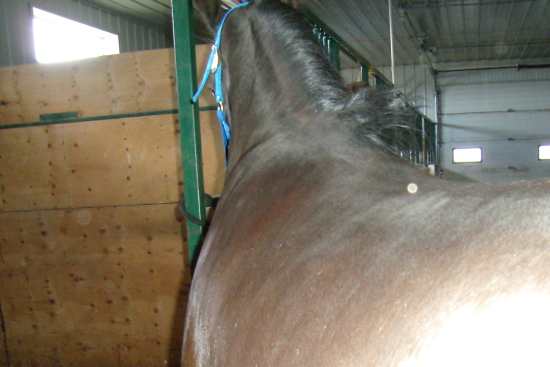 Some horses are really flat through the wither pocket area where the trapezius lies. 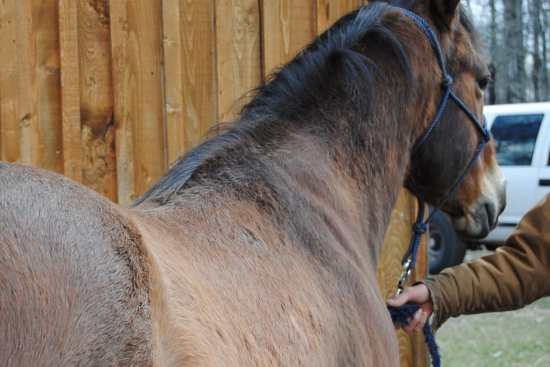 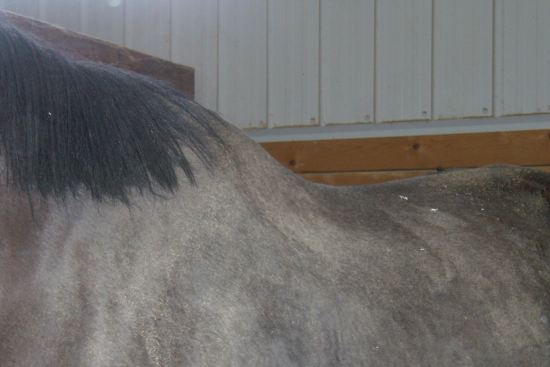 This is a 3 year old Warmblood who has never been ridden, yet she has quite the dip behind her shoulder blade where the trapezius lies.  She had probably spent most of her life in small pens and stalls and has never been worked, so I think she just has poor muscle development.  I would expect if she was used well with a good saddle that she would fill in a bit in that area. 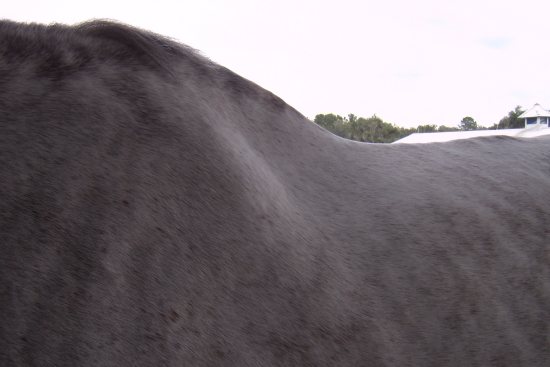 But this is a damaged back.  It can be hard to see because of his color, but you have a sticking-out shoulder blade with a lump and then a hollow behind it.  The trapezius muscle has atrophied - shrunk - as a result of excess pressure from a saddle.  (The lump and sticking out shoulder blade are also a result of excess pressure in that area.)  I saw this horse in person and there were a number of things that showed long term effects from poor saddle fit. 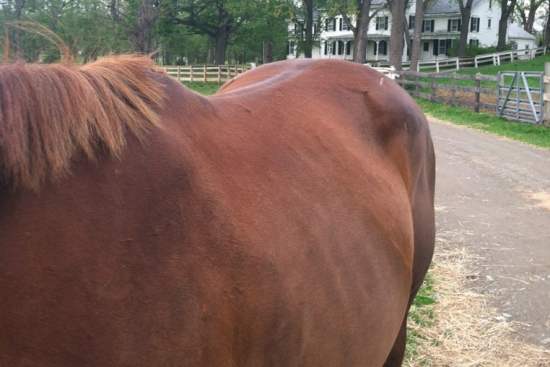 Here is another picture I snaffled off the net of a horse I believe is showing signs of muscle damage as a result of poor saddle fit.  This is supposed to be a small quarter horse.  Yes, she is thinner, but it is that protruding shoulder blade and lump in front of the deep hollow that convinces me this is a damaged horse.  These horses need help to build some muscle back up in this area.  Whether that is possible or not depends on the extent and severity of the damage.