The lumbar and sacral vertebrae 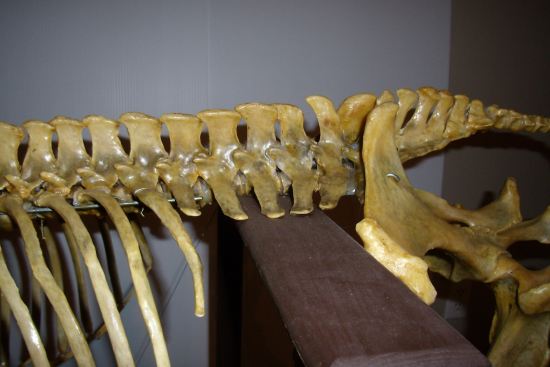 Continuing on with our equine anatomy...  When it comes to changes from the norm in the equine spine, the lumbar section wins the race.  There are supposed to be 6 lumbar vertebrae and 5 sacral vertebrae.  In one study on thoroughbreds, 39% didn't have the normal numbers, but 89% did have a combined totally of 11, which means that what was missing in one section was added to the next section.  Our skeletons go along with this, as 100% of our (two!) skeletons have abnormal lumbar vertebrae.  But at least their abnormalities are different ones so between the two skeletons I can still show pictures of what they should look like! 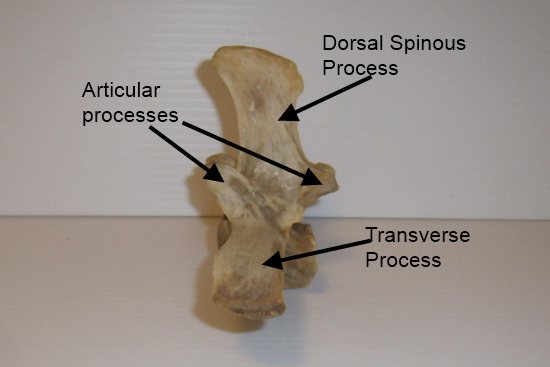 The shape of a lumbar vertebra follows the same basic pattern as the rest.  The dorsal spinous process is medium height and leans forward on them all.  There are articular processes front and back which form the joints between the vertebrae.  But the transverse processes are different in that they are long, broad and flat. 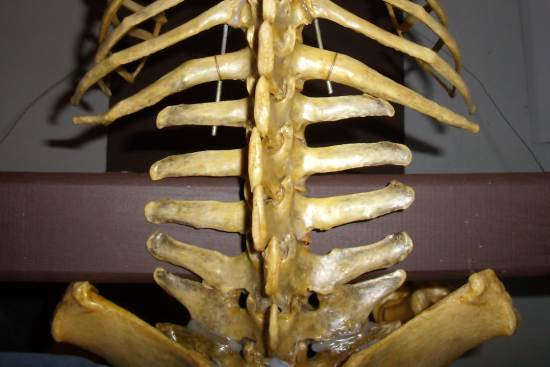 The longest transverse processes are on L3 and L4.  They get shorter ahead of and behind those two.  The transverse processes on L1 and L2 arch backwards a little.  On L3 and L4 they go out pretty straight, and on L5 and L6 they arch forwards.  This configuration allows them to fit between the ribs which angle backwards and the wings of the pelvis which reach forward. 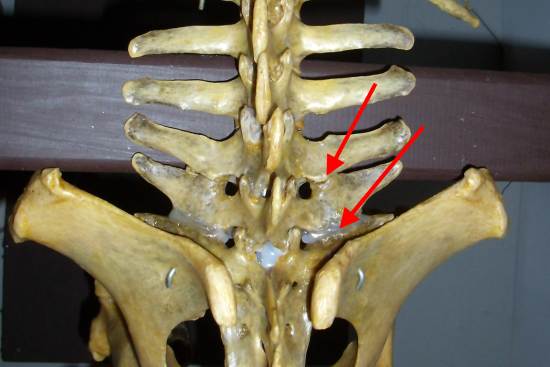 The sacrum is behind the lumbar vertebrae.  In the adult horse, it is a solid bone comprised of 5 fused vertebrae.  The wing is at the front of the sacrum and it is vitally important.  The front of it has a joint to the transverse process of L6, like we said before... 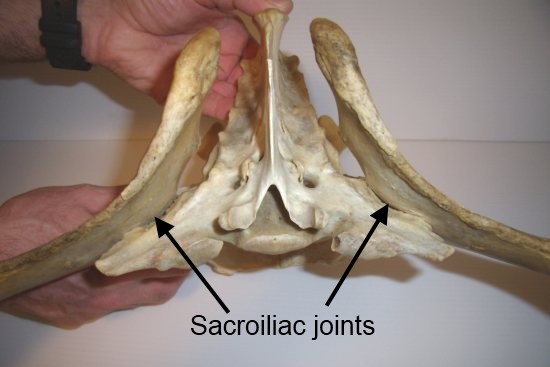 but the back of it joins to the pelvis at the sacroiliac joint, which is the connecting point between the hind legs and the spine.  The joint there is not the same kind of joint as in the legs. 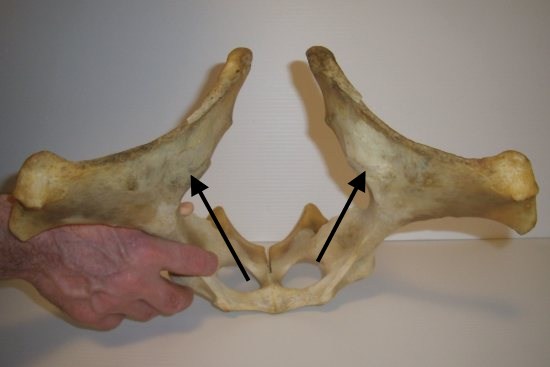 In fact, you can only see the area of the attachment on the pelvis as a small section of roughened bone.  It is a very tight, ligamentous connection but damage to it is not uncommon in performance horses and can cause a lot of pain and problems for the horse. 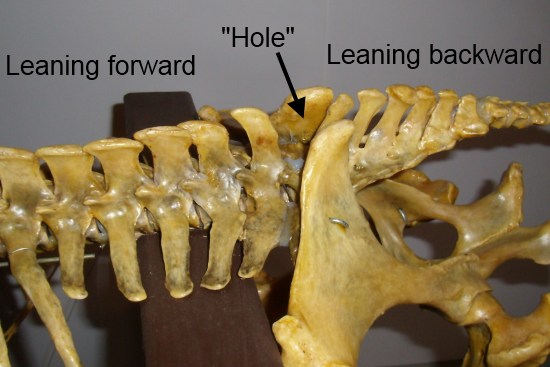 The dorsal spinous processes on the sacrum lean backwards, which leaves a large gap between them and the spinous processes on the lumbar vertebrae.  You can feel this quite easily on the horse.  If you run your fingers along the tops of the lumbar vertebrae you get to a "hole" which is relatively long.  When you reach bone again, you are at the sacrum.  And, as always in God's creation, that difference is there for a functional reason. 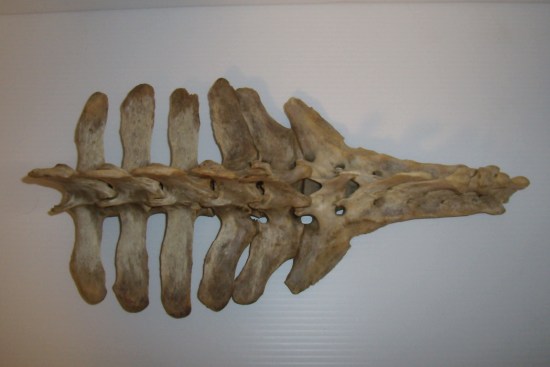 Now for those of you who counted, you will have noticed that while I said that there are 6 lumbar and 5 sacral vertebrae, that doesn't apply to these ones.  Smudge had 5 lumbar vertebrae and 6 fused vertebrae in her sacrum. 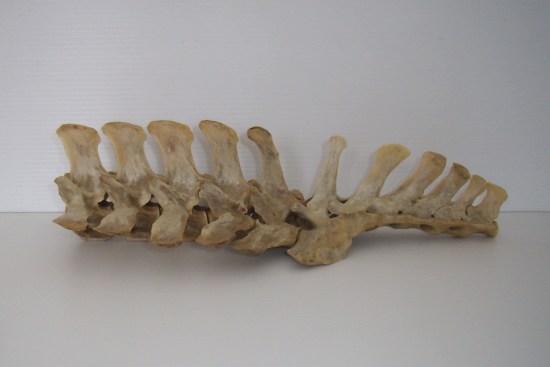 If you look at them from the side, the lumbar dorsal processes lean forward, the back 5 sacral processes lean backwards and that one in the middle couldn't decide what to do so it stood straight up.  They call that a sacralized lumbar vertebrae.  Just one of the anomalies that can be found in equines. 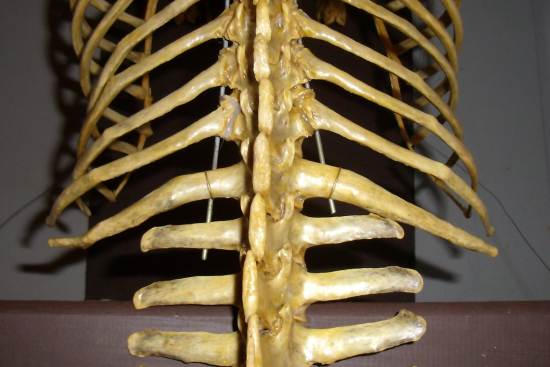 And if you were counting Arnie's lumbar vertebrae, you might have said he only has 5.  But he actually has 6.  That last "rib" isn't really a rib. 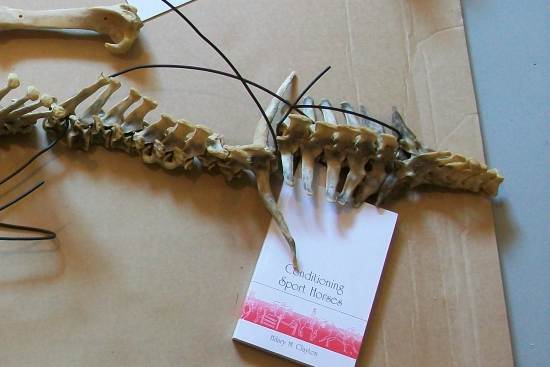 It is actually a modified transverse process on a lumbar vertebra.  Instead of looking like a normal lumbar transverse process, it looks like a rib.  The end of it was even attached to the rib ahead of it with a piece of cartilage as part of the costal arch like a normal rib would be.  So when we first counted Arnie's ribs on his skeleton, we counted 19 instead of 18.  Just another anomaly...

If you read about saddle fitting on the internet, you will find it stated repeatedly that you cannot have any weight past T18 or the last rib, depending on who you read.  On the other hand, almost every western saddle out there has bars that extend onto the lumbar area of the horse, and they have been built like that for hundreds of years without crippling horses.  How does that work?   We'll discuss that in the next post...

PS.  We are often told that Arabian horses have one less vertebra than other breeds.  I have yet to find any real studies that show this to be true, though I have been asking the question for over 20 years.  If it is true (and it very well could be) then I would expect that the variation would be in the lumbar area which is most prone to them.  Does anyone know of research that has checked this out?  I would love to know for sure.

Posted by robyn on Dec 29th, 2014
Your pictures are terrific.
Yes, the Arabian can have one less thoracic vertebrate and the warmblood can have one extra!
Sharon May-Davis has extensive data on this through her dissections.
Posted by RodandDenise on Jan 2nd, 2015
I have seen a couple of studies that show that a high percentage of horses aren't "normal" - and that goes throughout breeds. In my own experience, from 6 skeletons, only one was "normal". The other all have some sort of aberration. No wonder things get complicated!
« Previous
Next »