Home > Saddle Tree Blog - From Shop and Desk > How does the horse's shoulder blade move?

How does the horse's shoulder blade move?

Posted by RodandDenise on November 4, 2011

One of the big questions that tree and saddle makers have to deal with is how to fit the saddle behind the shoulder blade (NOT on top!!) and yet allow for its movement.  We’ll get there, but first we have to know more about how it moves. 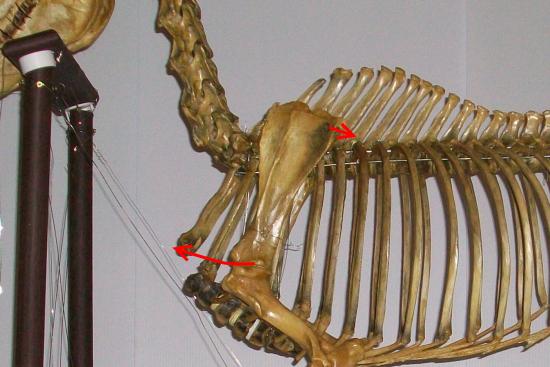 Now that you have seen some of the anatomy of the foreleg, you will understand that because there is no bony connection, the scapula can and does move forward and back against the rib cage.  But because of the strong muscular attachments, it has a limited range of motion in all directions.  It can also tilt (a bit) so the top is out more and the bottom is in more, and vice versa.  It can tilt so the front is out more and the back is in more, and vice versa.  And we know that it rotates during movement, with the bottom going forward and up and the back corner moving a bit back and down as the horse extends his leg. 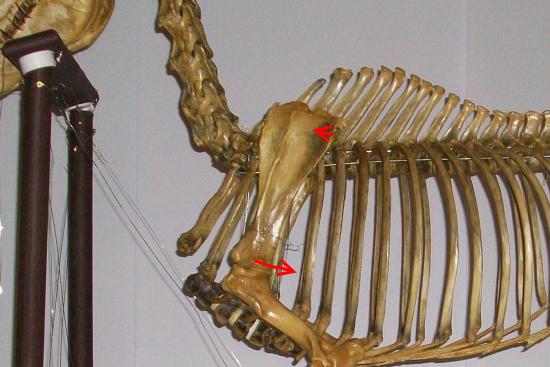 The opposite occurs when the leg is as far back as it can go.  The rotation occurs because the main muscle connections are not at the top of the scapula, but spread out over basically the upper third of it.

How far it moves will vary a lot depending on the horse’s conformation and how he uses his leg in movement.  So why don’t we know the answer to these questions from research?  Research on movement now is done primarily by putting reflective markers on the skin above bones that don’t move relative to the skin, and then evaluating the change in position of the markers when the horse moves.  Because the shoulder blade moves, not just relative to the rib cage but to the skin as well, researchers can’t use this method, and they haven’t come up with another one to test scapular movement – at least as far as I know now.  This means that how the shoulder blade really moves relative to the rest of the body at all the different gaits is still unknown.

Test it for yourself 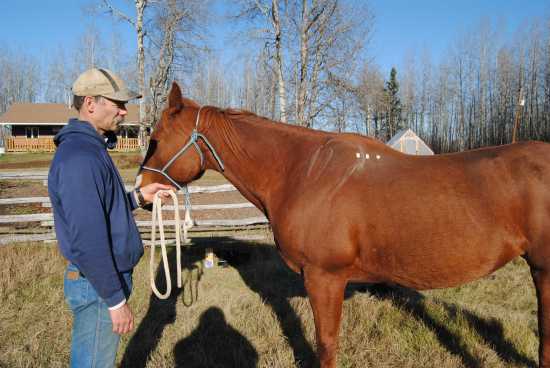 It is a very interesting exercise to walk along beside your horse and feel the shoulder blade as they walk.  You notice small movements in all sorts of directions during the stride.  You feel the scapula moving around a bit underneath your hand because your hand stays in the same place on the skin and the scapula moves around underneath it.  You can easily put your fingers along the spine of the scapula and feel how that moves.  But the most important thing in terms of saddle fit is what the back corner of the shoulder blade does.

Where does that back corner move? 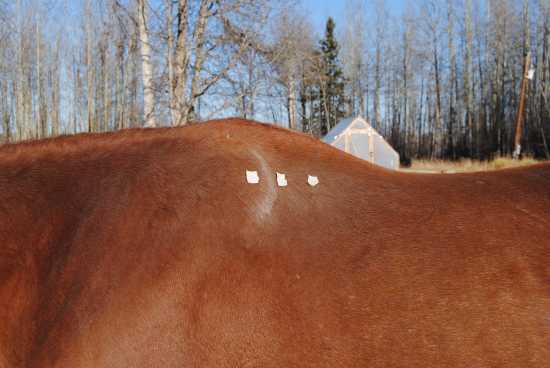 You can feel the “back of the shoulder blade”, recognizing that you aren’t feeling the actual bone or cartilage but the muscle that sits over it.  In this picture, we used chalk to mark the position of the back of the shoulder blade when our horse was standing square.  Then we walked.  And with a finger on that chalk line and a couple more behind it, we could feel how far back it went on our horse at a walk.  That is where we put the first piece of tape behind the chalk line.  Then we did the same thing feeling ahead of the line, and that piece of tape marks the farthest forward the back of the shoulder blade would move during a walking step.  The variation on our horse at a walk is about 1 ½”.  I would think it would be a bit greater at faster gaits, but that is just an assumption because I can’t feel well enough at faster gaits to know.

What about the “lift the leg check” you see people do? 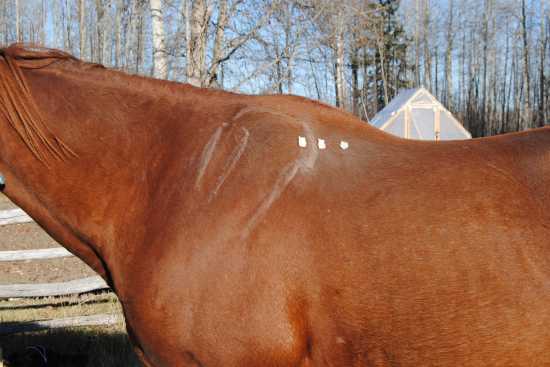 We have seen this used as a demonstration of "normal scapular movement" and we wondered.  So Rod lifted her leg so the forearm was just horizontal, and we checked.  The tape about 3” back of the chalk line is the result.  If we had pulled on the leg, I’m sure we could have made it move even farther back.  So the effect on the leg when a person moves it is a very different thing than how the horse moves the leg as he takes a step.  In fact, by lifting the leg forward in this way, we were probably creating close to the maximum rotation of the shoulder blade – a movement that is unlikely to happen in real life, at least during normal movement.  So when you see the demonstrations showing that the shoulder blade “moves back 4 inches”, you must be aware that what you are seeing probably isn’t what actually happens when the horse moves on his own.

So how does all this affect saddle fit?

To see more of how shoulder blade movement affects saddle fit, check out our Proper Position of a Western Saddle video.

Posted by Aryana on Jul 27th, 2015
Thanks I was very curious if that was showing normal range of motion when people pulled on the foreleg or was that part of the normal gait pattern thanks
Posted by RodandDenise on Jul 27th, 2015
Generally when you read that it goes 4" or more back it is because they have lifted and pulled the leg forward to mimic a horse extending their leg. What they may not realize is that because there is no bony attachment between the leg and the body, what they do and what the horse naturally does is quite different...