Home > Saddle Tree Blog - From Shop and Desk > Every tree maker does things differently... (part one)

Every tree maker does things differently... (part one) 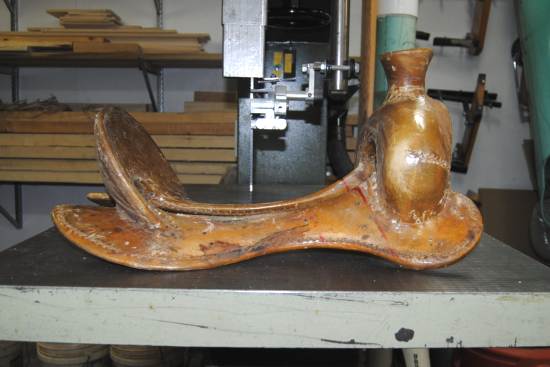 We have another tree in to duplicate, and there are lots of interesting things about this tree we noticed and discovered, so I wanted to share with you some of the ways tree makers do things differently. 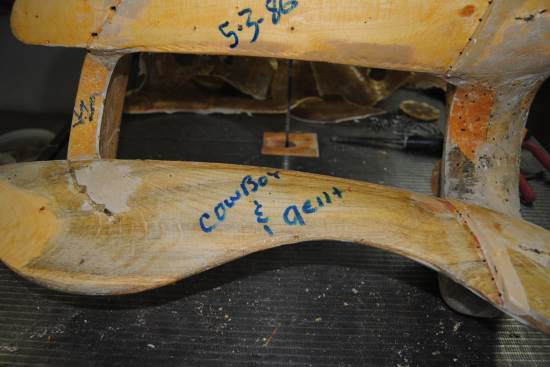 The story on this tree is that was in an older, well made saddle.  The date we found on the tree is 1986, and that fits with the date the saddle was made according to the owner.  It is a production tree from a company no longer in existence.  The owner has torn it apart and sent it to us, not a saddle maker, so we have a good history on it.  (But we don't know who cowboy and gent are...) 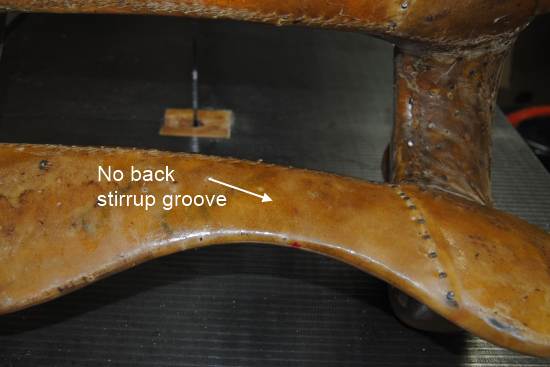 The owner said he has always had to be aware of the Arizona bars in it or he would have occasionally have problems with his horses at that point.  (An Arizona bar, by definition, has no back stirrup groove.)  As we have said before, the lack of a back stirrup groove always compromises fit, even if it doesn't actually cause problems, and we won't build them, even in duplicates.  The owner is aware of this and is more than OK with it.  But lately the saddle started to sore horses.  He was sure the tree had to be broken because something has changed.  So he took it all apart and sent it and the leather that goes onto the tree up to us to duplicate. 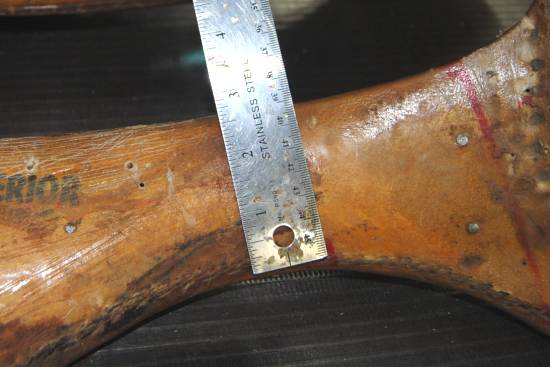 Looking at the bars, something different between this tree and ours is glaringly obvious - the width of the actual bar itself.  At the thinnest part, which is where the back stirrup groove would be if there was one, these bars measure about 2 3/4" wide. 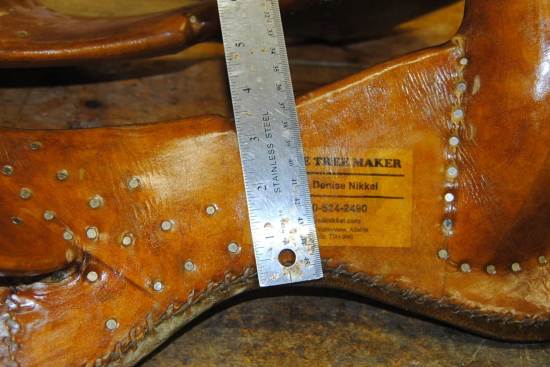 Our bars, measured at the thinnest part, measure at least 3 1/4" wide.  This doesn't mean they go 1/2" farther down the horse.  The bars on the old tree are spread apart a long way.  The hand hole width on it is 4 5/8" in the wood, and the new one will have a 4" hand hole width.  Rod plans to make the bars themselves wider (deeper) by increasing the surface area upward in the duplicate.  The outline of the bottom of the bars still needs to fit into the old skirts so we can't change the shape of the bottom edge, but we can change where the top edge arrives, to the benefit of the horse. 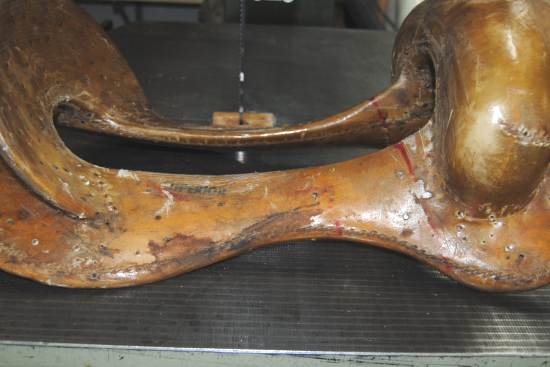 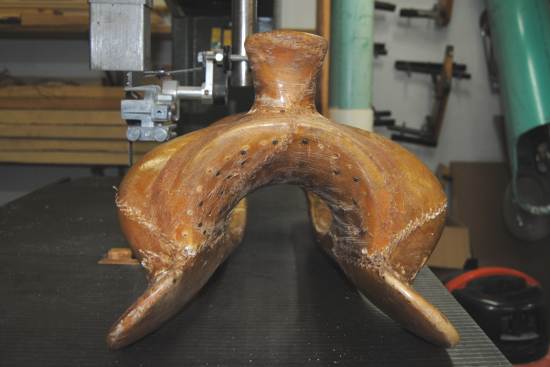 This tree is a wood post swell fork, which is pretty unusual for that early a date.  When Rod was taught to build trees almost 10 years later, his teacher had never yet built a wood post swell fork.  Something to note on this tree is the really wide gullet lip.  It goes from 3/8" wide at the top to 5/8" wide at the bottom, so it was definitely planned to be that thick. The other thing to notice is how thick the gullet itself is.  There are reasons for that which become obvious when the rawhide is removed... 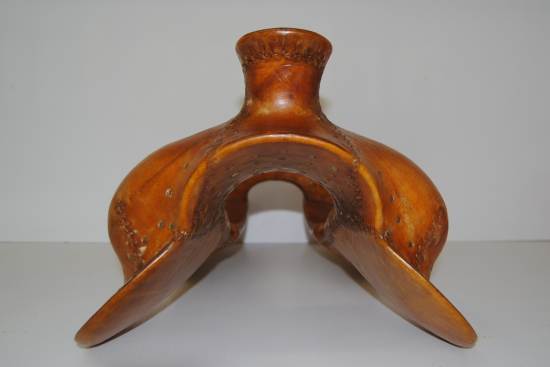 We prefer a narrow lip (1/8" wide in the wood) to give a finer look to the gullet lip.  Because of the way we build our wood post forks, and because of the construction materials  and way we build a wood post horn from the same block of wood as the fork, the gullet itself can be a lot thinner, giving more clearance to the horse while allowing the base of the horn to be lower, which is a benefit to the horse when roping. 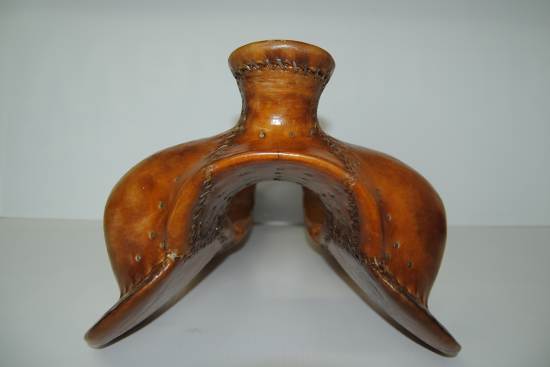 Just for fun, though, I thought I would show you this one.  We have made the bottom of the gullet lip thicker on request, as some makers like to tack the front of the skirts to it, helping to keep them curved outward to avoid interfering with the shoulder.  Making the lip thicker towards the bottom makes it easier for them to do this, so we have made a few this way, primarily for one customer.  Just another way that saddle makers all do things differently too... 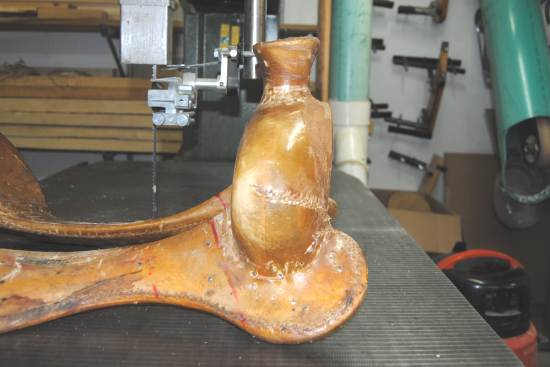 Looking at the fork from the side, it is extremely upright on the bars.  On the horse, it would be tipped a little more forward, so it wouldn't ever likely look like it was tipped backwards, but it is still very upright compared to most trees.  (Interestingly enough, I saw a picture on Facebook yesterday of a brand new tree that looked almost identical to this one in the way the fork was attached to the bars.) 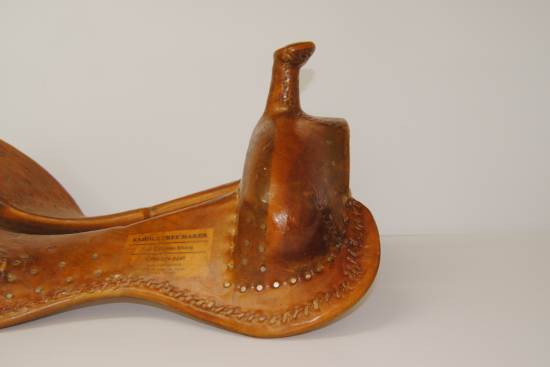 Even our "extra stood up" fork angle leans ahead a little bit more that this, though there is optical illusion about how much because of the difference in how the back, bottom corner of the fork is shaped.  Of the two looks, we prefer ours (surprise, surprise) but again, this is another thing that tree makers do differently, and probably different people prefer different looks.  Due to the fact that when you change the angle of the fork on the bars, the universe shifts out of phase with itself, we will be using our own fork angle on this tree rather than trying to mimic the original tree.  The parts will still fit back together fine and the universe will continue running as it should.  (If someone ever really wanted that totally upright look, we now know enough to be able to figure it out and build it, but that would mean a whole other set of charts to generate...) 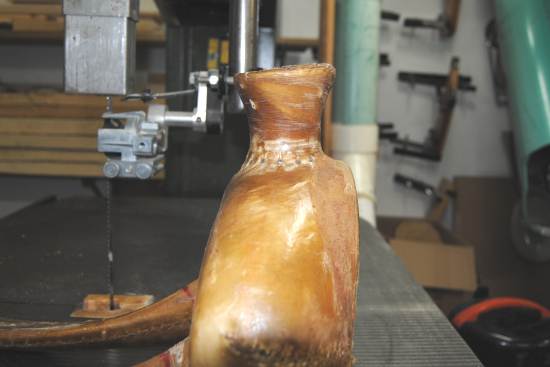 This was a 3" high by 3 1/8" cap horn.  Looking at the horn on this tree, it appears that it is leaning backwards relative to the fork.  It also looks like there is more scooped out of the back of the fork than the front (though this turned out to be rawhide induced, as you'll see in the next post).  The top of the cap is dead flat, and they also used a lot of nails around the base of the horn compared to what we do.  The other thing to notice is that the stock thickness on this tree is 3 3/4" (measured front to back on the fork), which is what we use as our "normal" on metal horn forks. 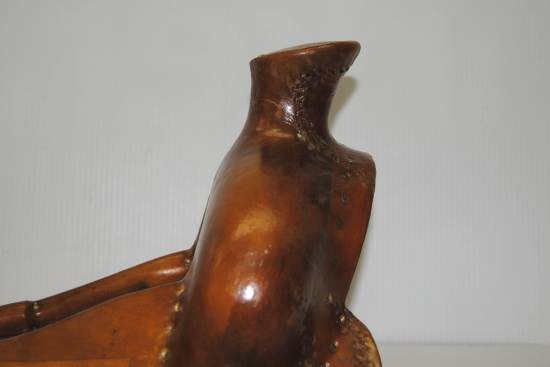 Here, for comparison, is a 3" high by 3 1/4" cap horn on one of our wood post Packer trees.  We keep 3 1/4" as the minimum cap size just so there is enough definition between the neck and the cap to keep the "pop can on a fork" look to a minimum.  Rod always puts some dome on the cap unless requested to make it flat, as he prefers that look.  He shapes the horn so the narrowest part is as close to the bottom as possible while still giving him a curve at the base.  A sharp angle there makes a weak spot and the horn is not the place for a weak spot on a tree...  He puts a few nails on the front of the horn, but doesn't like to use a lot of nails as he feels that weakens the wood.  Instead, he wraps and unwraps the horns repeatedly with tensor bandages as they dry, allowing the rawhide to dry while still holding it tight to the wood, keeping the shape of the horn he carved in the wood.  Also, we increase the stock thickness on our wood post swell forks to 4 1/4" (unless requested otherwise) so the look of the larger horn is balanced by the thicker stock. 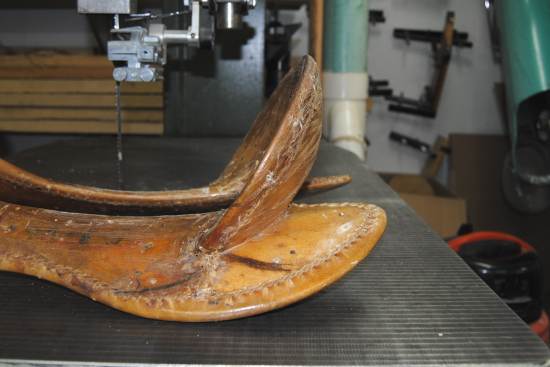 This is a tall cantle, at 5 1/2" high.  It also is very upright, and the owner is wondering if we can lay that angle back a bit more as the top of the cantle has caught his back a few times over the years.  We can probably do that, though figuring out the angle and cantle type to be able to do that so the old seat leather still fits between not only the top of the cantle and the fork but between the front point of the cantle and fork where we measure thigh length - that can be tricky.  However, since we have been doing this for a fair few years by now and we have developed a plethora of charts and measurements to go by, we can make it work.  Fortunately for everyone, leather is pretty malleable too...

So there are some differences you can see between trees even when still in the rawhide.  When we took the rawhide off, we found a few more...  But that will have to be another post.