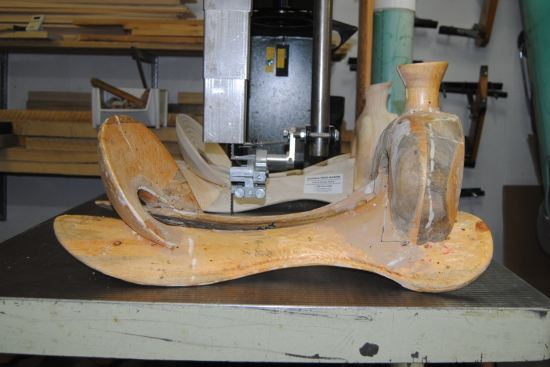 In part one about this tree we are duplicating, I showed you the differences that could be seen with the rawhide still on between this tree, which we have in to duplicate, and the way we build trees.  This post is about what we can see with the rawhide off. 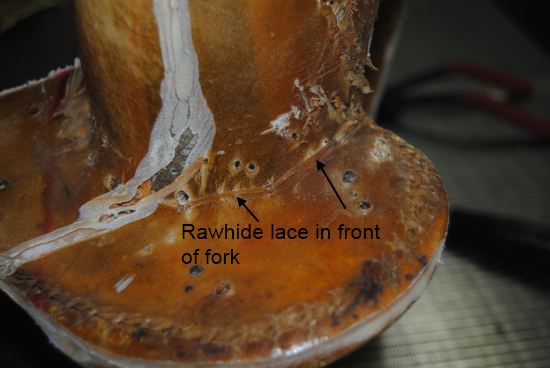 To hold the rawhide tight to the tree at the back of the cantle and around the fork, they did the old "lace it up and down through holes in the tree" trick.  This was a common way of doing things in very old trees. 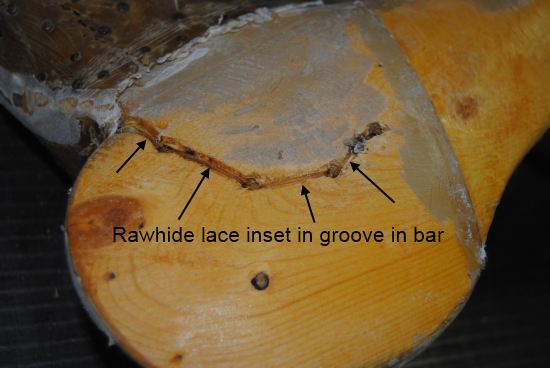 It isn't used that commonly any more, primarily because that many holes through the bars weaken them.  It is also a place that rot can start, though there was no evidence of that in these bars at all. 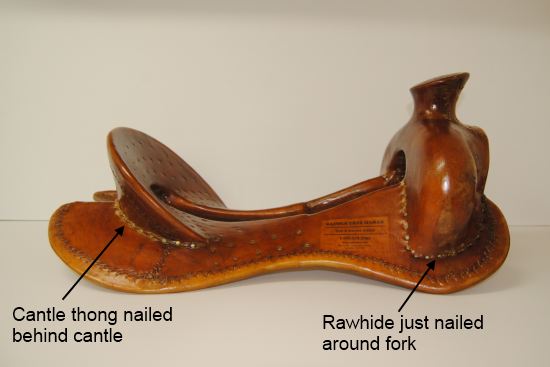 We use a rawhide thong behind the cantle which is thicker and wider than our normal lace, but we nail it down rather than lace through the tree.  Some tree makers today still use a lace around the front, usually nailed down like we do the cantle thong.  But Rod just nails it down there and we have not had problems with the nails pulling out.  One of the reason we can just use nails is because of the difference in materials.  Using straight tacks in pine versus ring shank nails in yellow poplar makes a big difference in holding power.  And this whole tree is pine, with the exception of the horn. 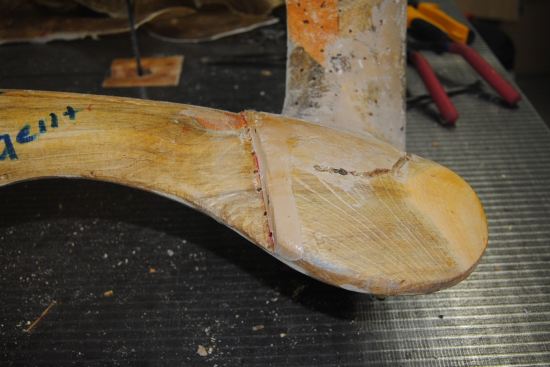 When we got the rawhide off, the first thing we noticed is that this tree is very smooth all over.  There are no marks left from the duplicating machines that almost certainly cut out the pieces.  Someone has taken time to remove them and make everything smooth.  They also used a fair amount of body filler, rather than the more common putty, to help them make everything smooth. 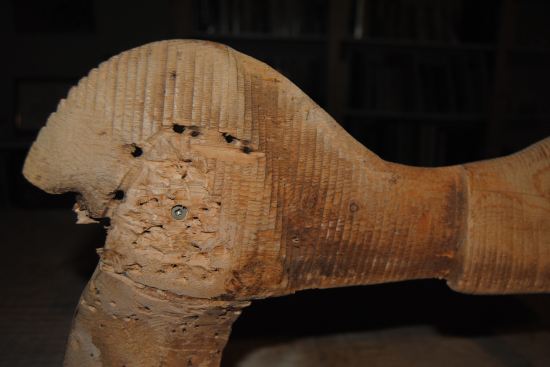 This is more typical of what we find in most production trees.  While some areas have been sanded smooth, there are often still places you can see the marks from the duplicating machines used.  This tree has '85 on it, so is from the same era although a different maker.  The newer CNC machines make smaller ridges than the old style machines did. 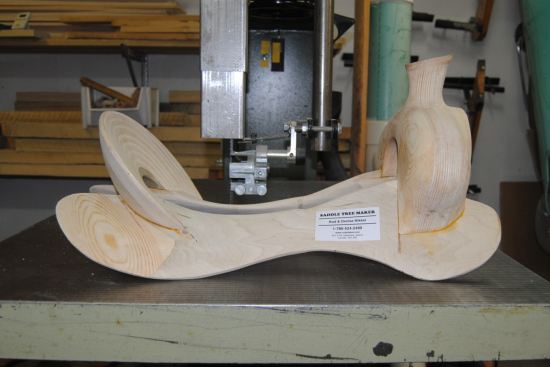 Since we don't use a duplicating machine, we don't have to worry about this.  The way we build our trees (band saw, carbide disc in the side grinder, rasp and then sandpaper) means that the wood in our trees is also smooth.  We do use body filler in our screw holes and around the horns in our metal horn forks, but we don't need to use it in the same way to make everything smooth. 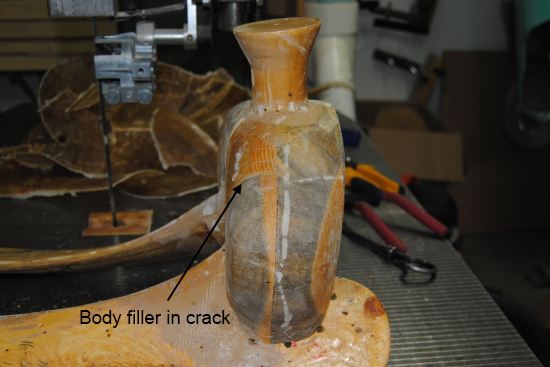 I have mentioned that the wood in this tree is all pine, but they did laminate the fork and cantle.  The fork is laminated down the center, with two layers of pine... 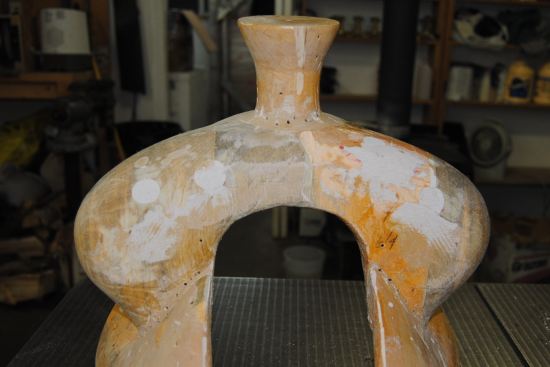 and also has three pieces of pine laminated into the back layer.  The front layer is just one piece, and it does have a small lip piece glued on the gullet. 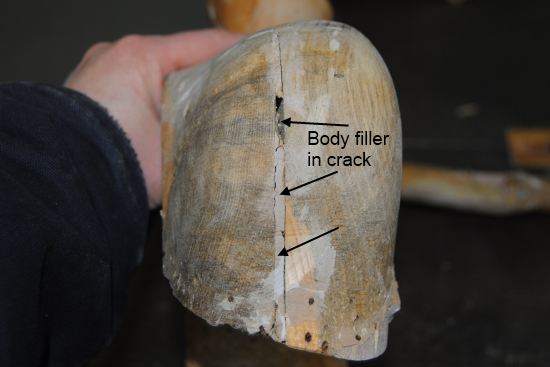 However, it is obvious that the laminations never were really tight as the layers of body filler between some layers show. 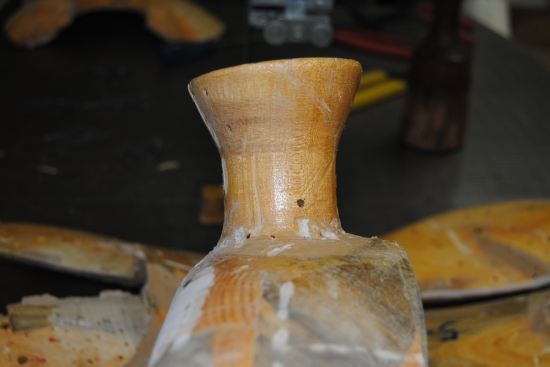 The horn is a hardwood of some kind, maybe maple?  When you see it without the rawhide, it is clear that it doesn't have more out the back than the front as it appeared in the rawhide.  It is even all the way round, like it was shaped on a lathe.  We have never seen a horn shaped this way before. 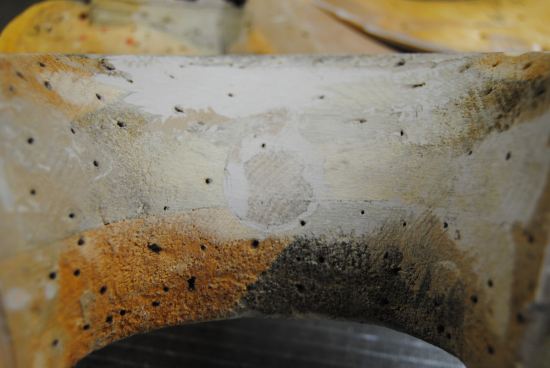 Since it isn't an integral part of the fork, how did they attach it?  Well, there is a dowel visible at the bottom of the fork, so they drilled a hole in the fork to connect the horn.  (Holes are always weak spots...)  But the dowel end is smaller than the horn cap, and if you look closely, the wood in the dowel is not the same wood as in the horn... 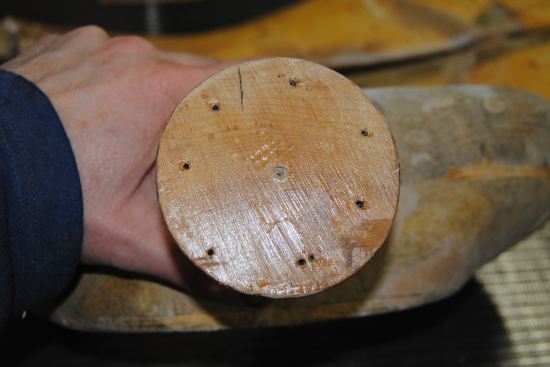 as you can see especially if you compare the top of the horn with the wood in the dowel.  So did they drill out the horn and insert the dowel inside it too?  We would have to cut the fork and horn in half to find out for sure and we don't want to do that, so we won't know for sure quite how they got it attached.  We can see a lot of body filler around it as well, but even after all this time and hard use, it is till solid as solid.  Still, this is not the way we choose to do our forks or our horns. 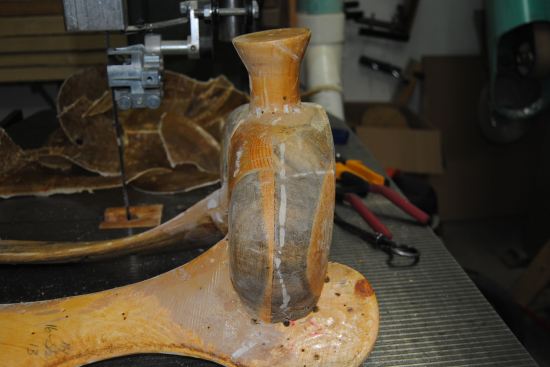 The other thing we can see with the rawhide off is that the horn has actually been attached so it leans backwards relative to the fork, which really affects the look of the whole fork assembly. 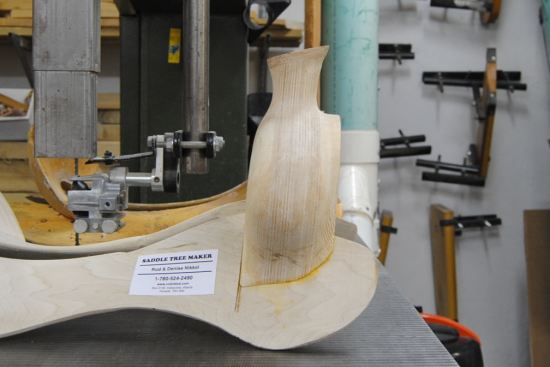 Here is the tree Rod built to put the old leather back on.  It shows how we use multiple laminations of Baltic Birch in the center of our forks with pine on the front and back.  The horn is built in as an integral part of the fork, not added on later, and the whole horn is hardwood.  (You can't see the 1" layer of maple that is at the back of the horn with the grain running vertically.)  We plane all the wood here very soon before we glue it all together, so everything is flat and smooth and glues together with very tight joins. 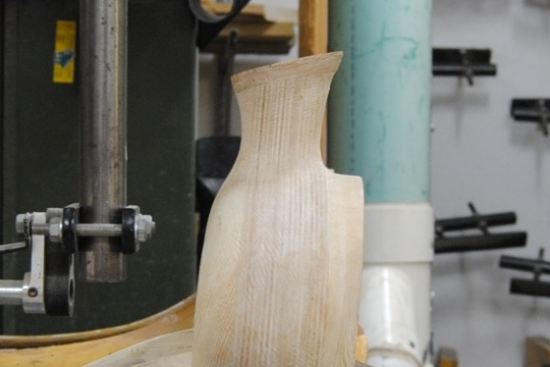 Then Rod shapes the horn the same way he shapes everything else - by hand.  It means he can put the low spot at the bottom of the horn and make a nice shape to the neck of the horn.  Because of the small horn cap on this tree, there isn't a lot of definition to the horn, but it still looks good. 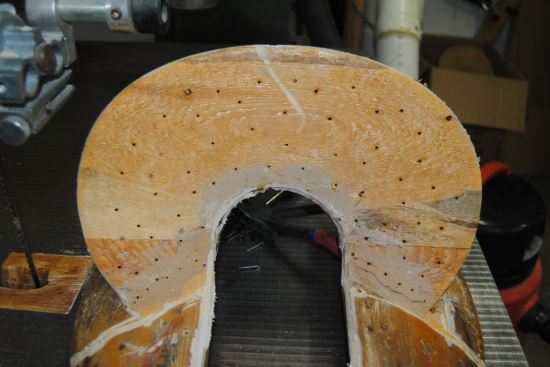 The cantle also was laminated, but probably only because it was so tall (5 1/2")that they needed more wood at the bottom to make up the height.  The whole top of the cantle is one piece of pine, and despite hard use, that piece of pine hasn't cracked down the center or along the top. 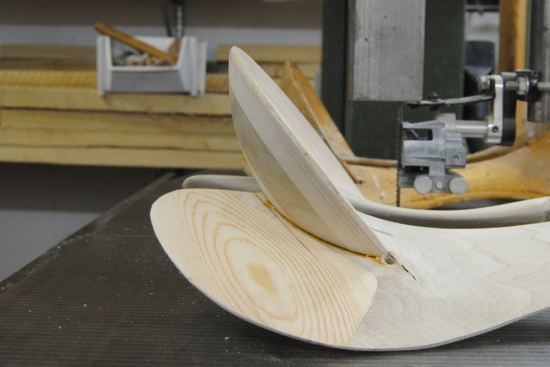 We laminate our cantles, but front to back, the front two layers being 1/2" Baltic Birch and the back two being 1" yellow poplar, or sometimes Baltic Birch. 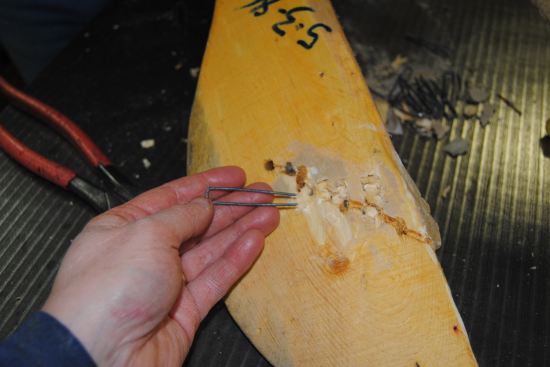 Another difference we found was how they connected the fork and cantle to the bars.  We use top quality GRK screws.  We have seen one production company use screws, but more commonly nails or staples are used.  This company used staples - and a fair number of them.  There were, if I recall, 26 staples in total holding things together. 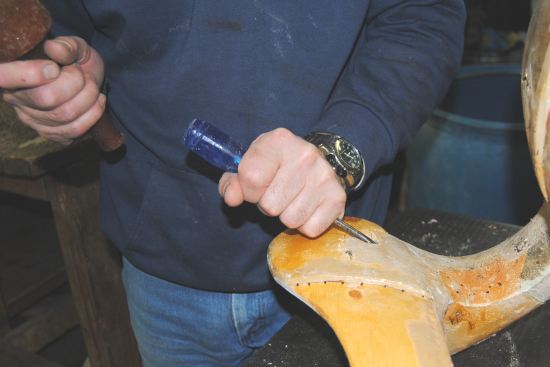 When you put a staple into pine with an air gun, it goes in a long way, and Rod had to pound a screwdriver tip under them to get them started before he could remove them with fencing pliers. 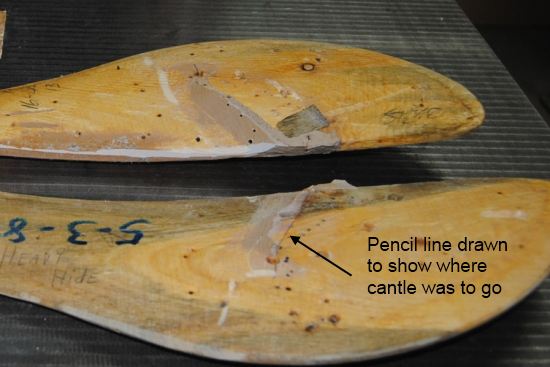 Once the fork and cantle were off the bars, it was clear that there while there was a fork cut on the bars, there was no cantle cut.  This is typical of production trees as they have only one or two bar lengths, regardless of seat length, and the cantle is positioned to make the correct seat length where ever that ends up on the bar.  Then body filler was used to make the seat blend into the cantle.  All true hand made tree makers we know make both a fork and cantle cut, as we do, and vary the distance in between for different seat lengths.  This ensures there isn't too little or too much bar out behind the cantle in the finished tree. 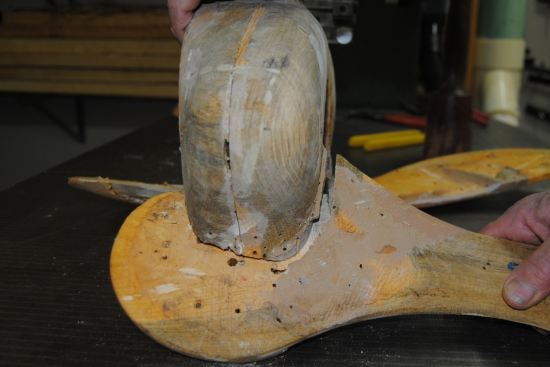 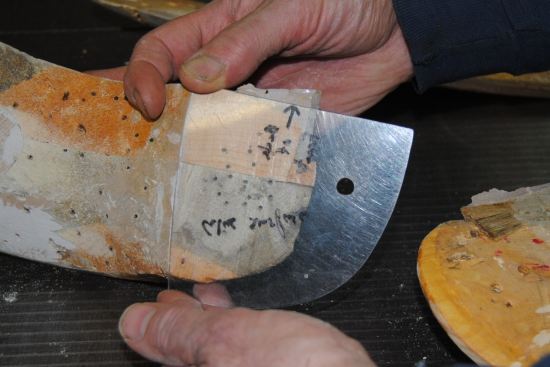 In comparison, here is the pattern we use for the bottom of our forks.  More footprint area means a greater area for attachment, and since we glue forks and cantles onto the bars as well as screw them, it means a much stronger attachment between the pieces.

This wasn't supposed to be a long post  but...  I still want to talk about how the duplication process went, as well as why this tree may have been soreing horses even though there was no obvious breaks in it anywhere.  I guess I have more topics for blog posts...