Home > Saddle Tree Blog - From Shop and Desk > And the vertebra is connected to the...

And the vertebra is connected to the...

next vertebra.  And the next vertebra is connected to the… next vertebra. (Sing it with me!!)  Actually they are connected to all of the other vertebrae, because there are some pretty interesting ligaments holding the spinal column together.  Time out for terminology here:  Tendons attach muscle to bone.  Ligaments connect bone to bone.  Most ligaments are quite short because they are connecting two bones that are sitting side by side.  While there are short ligaments that connect adjacent vertebrae together, there are three main, very long ones that run the whole length of the spine and which are very important in how the spine moves. 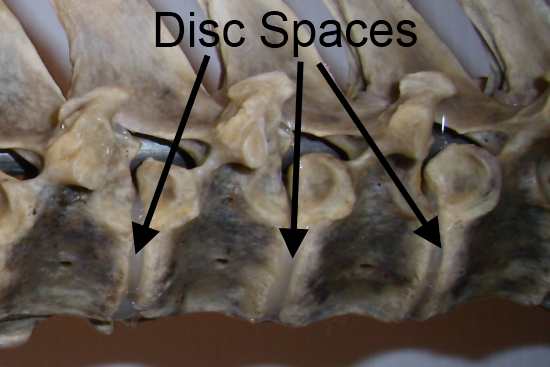 Before we get to the ligaments though, we need to understand about the discs.  These are made of strong elastic material on the outside with a softer center that compresses well and bulges out if the disc is damaged.  (This is what is often termed a “slipped disc” - where the center bulges out to differing degrees and puts pressure on the nerves leaving the spinal column.)  The discs are between the bodies of all the vertebrae to act as shock absorbers and allow for movement.  When I first was putting Arnie together, I used a thin foam to try to imitate the discs, but I found that everything went together better without it, so the glue has to pretend to be the discs. 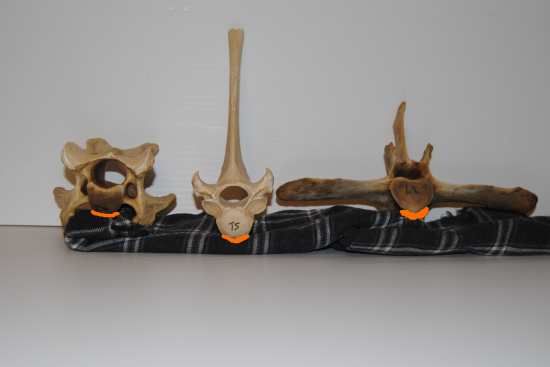 The first long ligament to tell you about runs along the bottom of the bodies of the vertebrae.  It isn’t a distinct structure till about the middle of the thoracic region, but it gets larger as it goes back and it ends on the sacrum.  It holds the bottom of all the vertebral bodies and their discs together.  It is called the ventral vertebral ligament.  (Ventral is the bottom side and dorsal is the top side.)  It is especially strong under the lumbar vertebrae where the tendons that attach the diaphragm to the top of the abdomen join it. 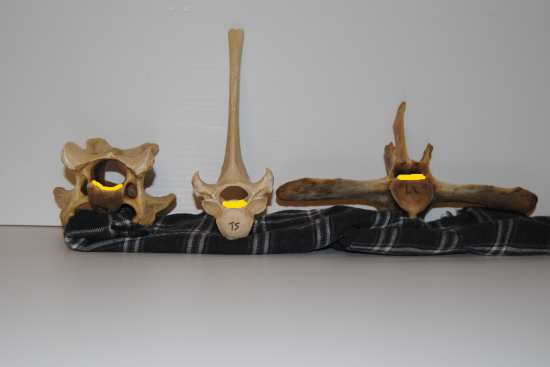 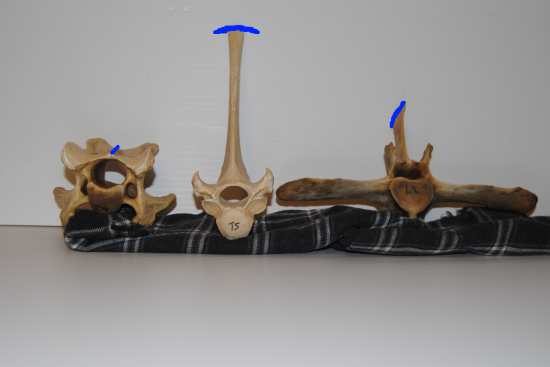 There is a third ligament which is very interesting because it has some unique features.  It also runs the full length of the spinal column (except for the tail).  It is called the supraspinous ligament and it has a major effect on spinal movement and shape.  Supra means above, and spinous is the name of the processes that stick out the top of the vertebrae.  So it connects to the top of all (except C1 and C7) of the dorsal spinous processes up to and including the sacrum.  (Some people like to call this the dorsal spinal ligament, but that is incorrect terminology since it could be easily mixed up with the real dorsal vertebral ligament described above.)  The section from the head to the withers is called the nuchal ligament, but it is important to know that the nuchal ligament is also part of the supraspinous ligament.

Most ligaments don’t stretch.  They don’t have much elastic tissue in them because they need to hold bones together, not let them separate.  But the nuchal ligament is very elastic.  It has to be to allow the horse to put his head down to graze (or drink from a 2 ½ foot tall waterer inside a 4 rail fence in the middle of a winter with a whole pile of snow) and yet still be tight when he holds his head up.  It works like a very strong elastic band, using the stored energy in its stretched state to help the horse lift that heavy head without needing as much muscular action. 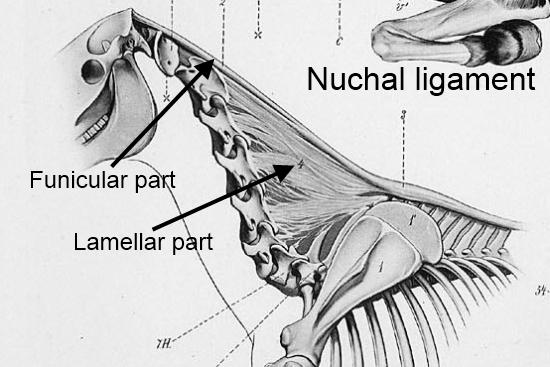 The nuchal ligament has two parts to it.  The long, cord like part on top (the funicular part) starts at the top of the head – the poll.  It runs along the top of the neck and doesn’t attach directly to any spinous process until T2 or T3.  This is really unusual because ligaments almost always are really close to the bones they connect.  So, how does the nuchal ligament connect to the cervical (neck) vertebrae?  Through its second part – the lamellar part.  This is made up of thin sheets of ligament that start on T2 and T3 as well as the funicular part of the nuchal ligament.  These sheets of ligament run from the funicular part down the center of the neck, between the muscles on each side, and attach to the short dorsal spinous processes on all the cervical vertebrae except C1 and C7.  (Apparently the connection to C6 is fairly small and sometimes absent too.)  So it still does connect the vertebrae together, although it is situated a distance away from the bones. 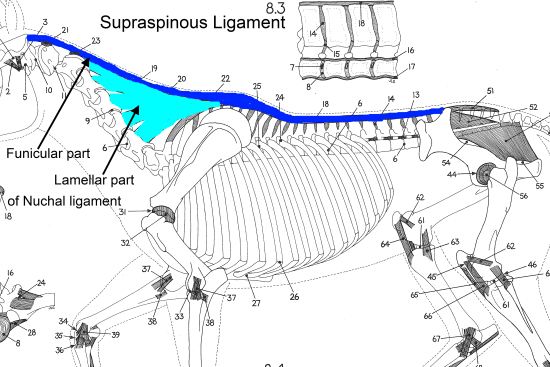 The nuchal ligament attaches at about T3 and from there on back it is called the supraspinous ligament.  It connects to the top of all the dorsal spinous processes all the way back to the sacrum and is made of the non-elastic type of fibre, though the change in fibre type from the elastic fibre in the nuchal ligament is gradual.  It is quite wide over the withers,where it also acts as the connection point for a number of muscles over the front legs.  It is not as wide farther back, but it is still very strong.  We’ll talk more about how this ligament affects the shape of the spine when we discuss spinal movement – eventually…

Then there are the short ligaments between neighbouring vertebrae.  The interspinous ligaments run between the dorsal spinous processes, connecting them together.  In the neck and up to T1, these are elastic.  In the thoracic and lumbar areas they are no longer elastic.  You think that design may have something to do with where the movement is needed?

There are also the joint capsules that go around the joints between the articular processes.  The amount of “play” in these joints varies with the section of the spine – more in the cervical joints and less in the thoracic and lumbar joints.  Then there are the ligaments that attach the vertebral arches together and which are associated with the joint capsules, called the ligamenta flava.  That means "yellow ligament" in Latin, and they are made up of more elastic fibres.

You would think that with the bones being fitted together so specifically and with so many ligaments holding things together that the spine would be a more rigid structure.  And to a certain extent it is.  If it bent between vertebrae the way, say, the hock bends, the poor spinal cord would be kinked and really damaged.  So sharp bends like that are not possible.  But there is an amazing amount of movement possible along the entire length of the spine although that movement is not the same at all spots.  In some sections, and even in some specific joints, there can be a lot of movement.  In other sections, there is less.  But put it all together and you have a very flexible system, which we will talk about more in the following blog posts on the different sections of the spine.