Home > Saddle Tree Blog - From Shop and Desk > We told you it would be good...

We told you it would be good... 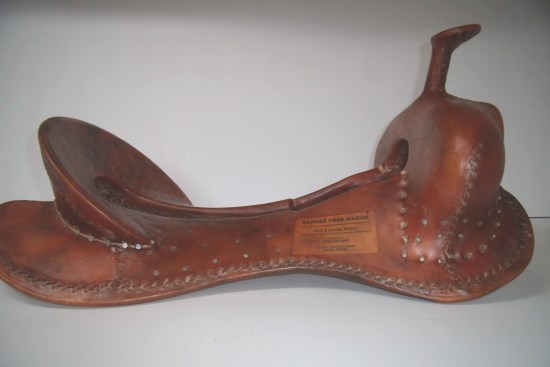 Our saying has always been "We won't say you can't break one of our trees, but we do say we want to hear the story, because it's going to be good."  It was - and here it is...  (To be read in the manner of a bed time story for a small child.) 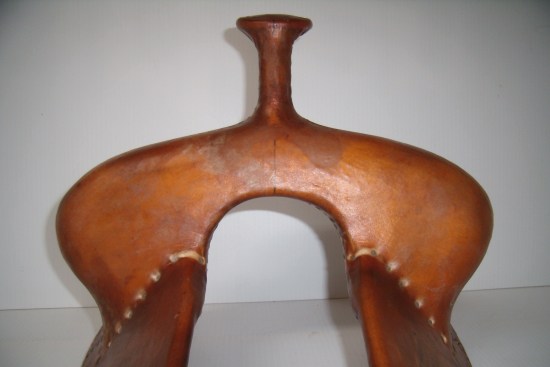 Once upon a time there was a very nice, Modified Association saddle tree.  He was built straight and strong and true, 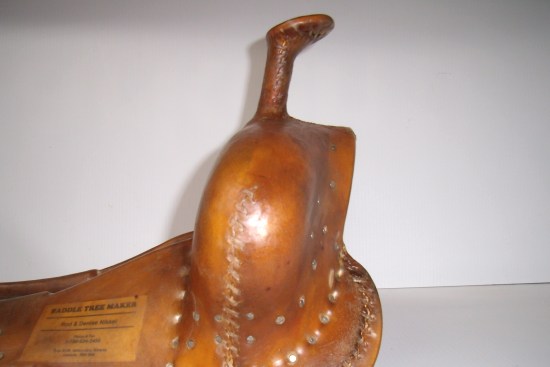 and had a nice straight horn neatly lined up with the back of his fork. 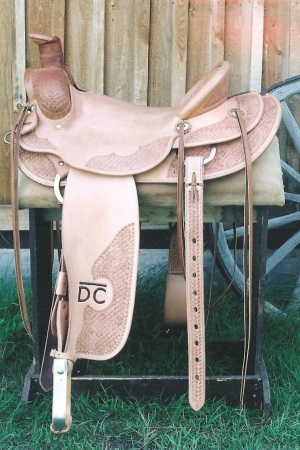 Then a saddle maker named Vern Rempel built a whole new saddle on him, and he was very happy.  He went to live with an outfitter in Northern Alberta where there are lots of animals to hunt, and lots of trees to ride around and under.  He worked hard for three years, carrying the outfitter and the customers he was guiding through all kinds of weather and over all kinds of terrain.

Then, one day, while he was out working, something different happened.  Usually, when the riders got relatively close to their game, they got off their horses, tied them up, and then went farther on foot before they took their shot.  But this day, the hunter was so excited that as soon as he and the guide were off their horses, he shot his gun right away!  The horse this tree was on was pretty used to guns, but the other horse wasn't and he got scared and ran away.  When one horse gets scared, usually they all get scared, so the horse this tree was on ran away too!

In Northern Alberta, where there are lots of trees to run around and under, it is very easy to get lost very fast.  And that is what happened.  The two horses got lost.  And then they got separated.  It was very scary.  The guide found the first horse after only one day, but it took an airplane and two days for them to find the horse this saddle tree was on.  And when they found the horse, he was OK, but he was standing in the river with the saddle under his belly, soaking wet. 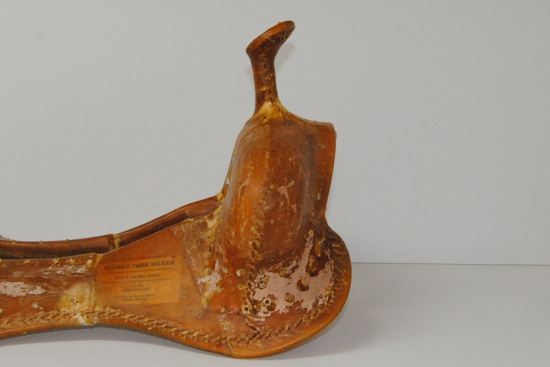 As for the saddle tree - his horn, that had been so straight, was now bent backwards, 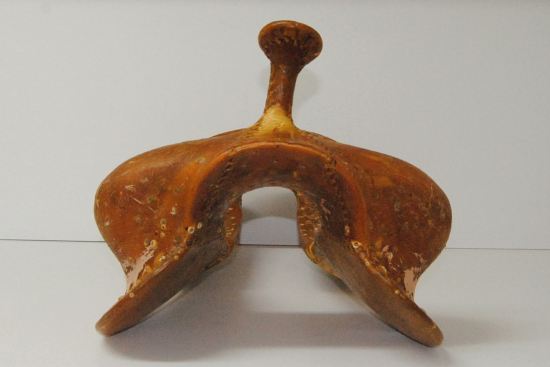 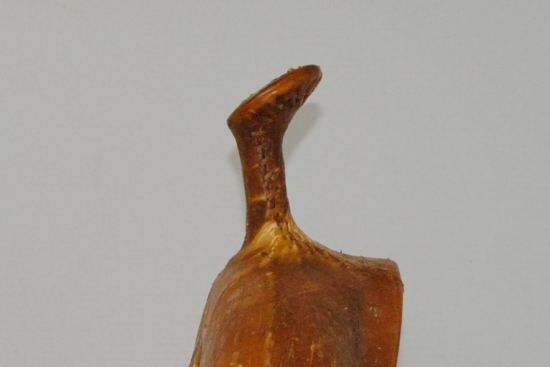 And it wasn't just bent from the bottom.  Where it used to be very straight, now the whole neck was bent in a bit of a curve!  When the tree maker called the horn maker, he asked him how much force it would take to bend a bronze horn.  The horn maker didn't know an exact number, but he said it would have to be a WHOLE LOT!!

The saddle maker tested the saddle every way he could, but he couldn't make the saddle tree move or creak.  He thought maybe he could just bend the horn back into shape and everything would be OK.  But he knew it would take an big hit to bend that horn, so he thought he would check things out more. 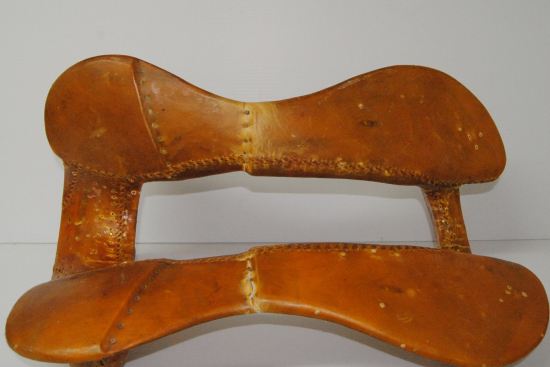 He called up the tree maker who said, "That isn't a good sign.  You better take it all apart and send it back to me.  I'll check it out."  So the saddle maker did.

With everything off the tree, the tree maker could make it move - just a little bit.  So little you really can't see it in the pictures.  But it did move.  That wasn't good either. 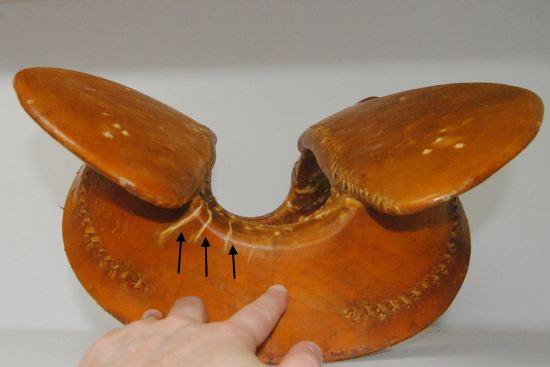 It also showed some stress marks on the rawhide at the back of the cantle. 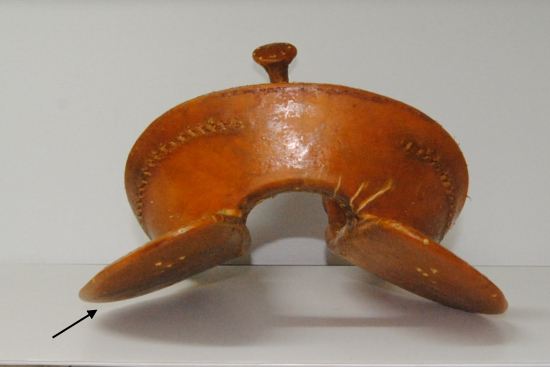 The saddle tree also wasn't nice and square on the table any more.  The tree maker knew something was wrong.  But what?  He would have to take the rawhide off to find out. 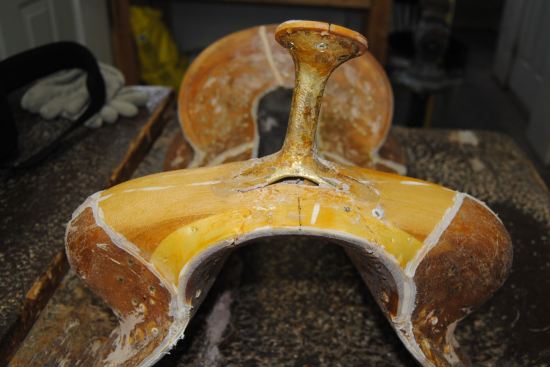 First, he took the rawhide off the horn.  The amount of pressure needed to bend the neck of the horn also bent the feet of the horn, but they hadn't broken.  The screws hadn't broken or pulled out either. 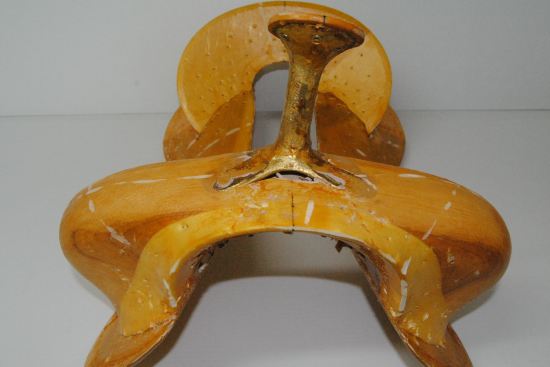 When the rest of the rawhide was taken off, the whole fork was still OK.  (The white marks on the wood are from the grinder cutting through the rawhide so the tree maker could take it off in pieces.  You can't remove this quality of rawhide by cutting the stitches and pulling it off.  It won't bend that much!) 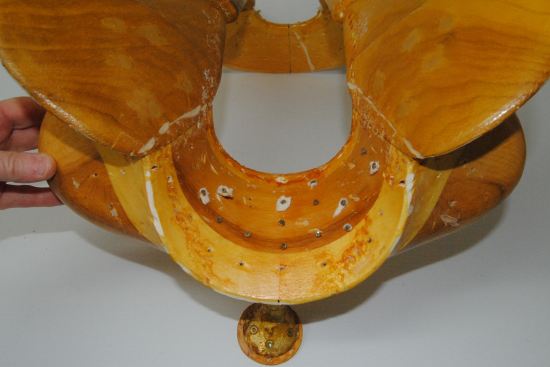 There were no cracks in the fork anywhere, 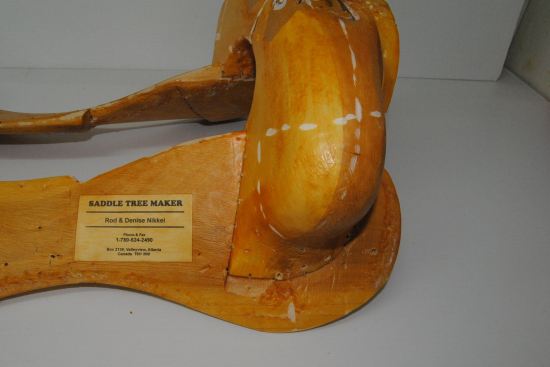 and it was still attached to the bars tight and solid.  That was good for the tree maker to find out.  He was happy to know the materials he used to build forks could stand up to such severe testing without breaking. 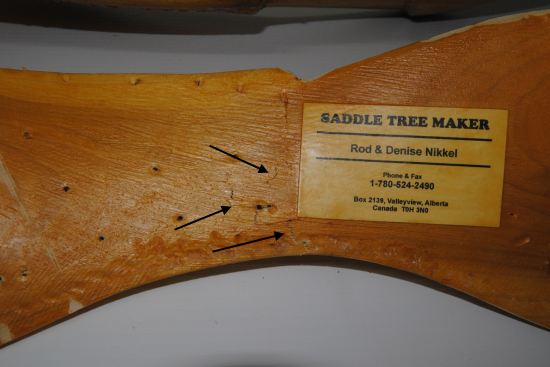 But when he took the rawhide off the bars, he wasn't so happy.  The weakest spot on a saddle tree is the back of the stirrup groove where the wood is narrow side to side and thin top to bottom.  There are also nails there, which weaken the wood a bit as well.  And whatever the force it took to bend the horn put enough pressure on the bars to crack them at their weakest spots. 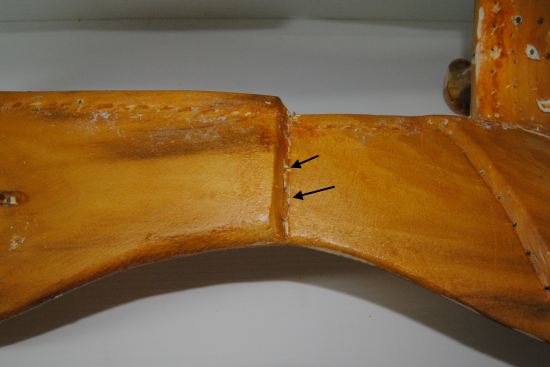 Neither bar was broken through.  They were both cracked part way up from the bottom edge while the top edge was still intact.  This is why the customer, the saddle maker and the tree maker couldn't get the tree to move when they tested it.  But if it had been ridden like that, over time the rawhide would have become softer and weaker, and the bars would have broken the whole way through. 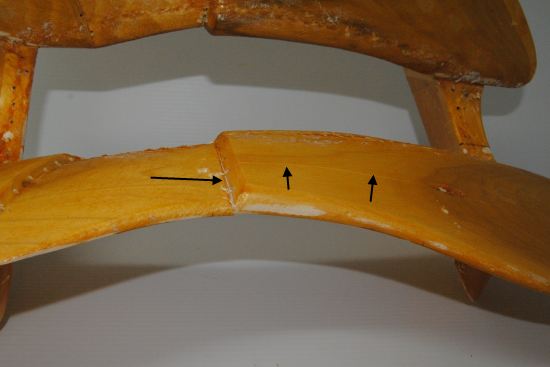 The bars had cracked at the back of the stirrup groove where there was a sharp change in angle and where the nails holding the rawhide down were set.  (The weakness of a sharper angle versus a more rounded curve is why the tree maker puts a bit of a curve at the base of his wooden horns.)  When the tree maker looked closely, there was also a long, fine crack going back on the right bar from the stirrup groove. 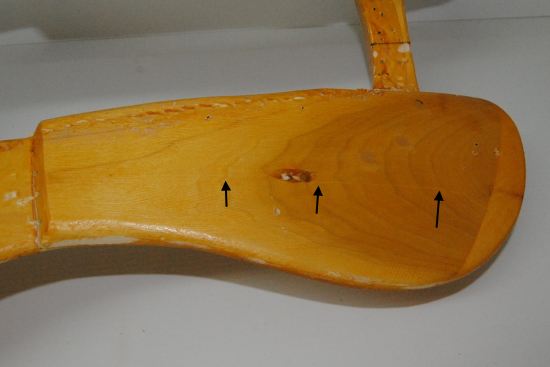 It went through the hole for the cantle thong and almost to the back of the bar, but not quite.  This was more like what the tree maker had expected, since when he had tried to break bars before to see how strong they were, they had always split lengthwise, never across the stirrup groove.  But he couldn't make this crack open or move, no matter how hard he tried. 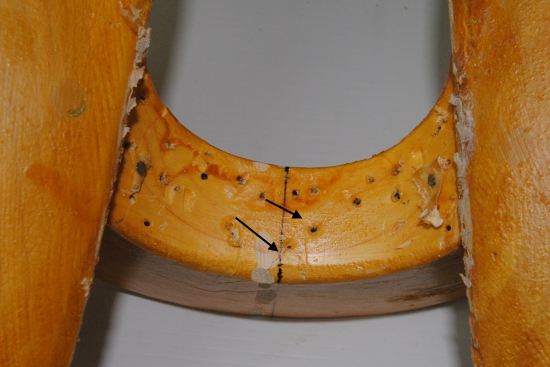 Then he looked really closely at the cantle, and he could see a couple of really fine cracks in it too, on the bottom 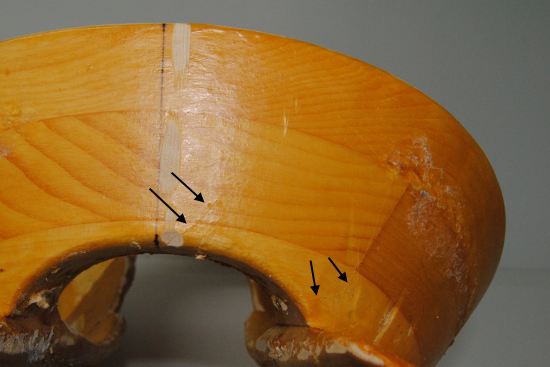 and on the back of the cantle.  But the cantle hadn't broken apart, even with all that pressure on it.

So while the tree maker was sad that the saddle tree had broken, he was also fairly satisfied with how little damage was done considering how much force must have hit that poor saddle to bend a horn that badly.

The tree maker really wondered how it happened.  There is a slight chance that the horn had got caught under a low branch and got bent that way.  But if the saddle was still up on the horse's back, it would not likely have bent it so far sideways.  It also wouldn't have been as likely to have broken the bars since the whole bar would have been supported by contact with the horse's back if it was still in the right place.  More likely it had been hit against a tree or a rock when it was under the horse's belly, or maybe when it was on his side.  Then, only the center of the bars would have been contacting the horse, so they wouldn't have been supported well from beneath and there would have been more chance of them breaking.  Maybe it even happened when the saddle was soaking wet so the leather wasn't quite as strong as normal.  But nobody will ever know, because the poor tree had been hit on the horn so hard, he couldn't remember anything about what had happened.

When the tree maker saw the damage, he knew the poor saddle tree couldn't be used any more, so he built another tree for the old leather to go on.  It was much easier to build than a normal duplicate, since he could use his own patterns and angles.  But he was still a little bit sad that after almost 17 years and close to 2200 saddle trees built, one had finally broken, even though it was under exceptional circumstances.  He had heard lots of stories of other saddle trees that hadn't broken.  Even a story of another saddle that was on a horse that was lost for three days and under the horse's belly when it was found.  But its horn wasn't bent, so it hadn't had the major stress that this tree did.

And there was one more very important question the tree maker wanted answered:  Did the hunter at least get his animal?  Yes!  He did get his moose.  So at least the hunter was happy.

Posted by Julia on Dec 1st, 2012
Wow! Impressive! And in comparison to the broken Crates saddle tree I detailed on my website, it's night and day. You guys do HIGH quality work. Love your trees!
Posted by RodandDenise on Dec 1st, 2012
Thanks, Julia!